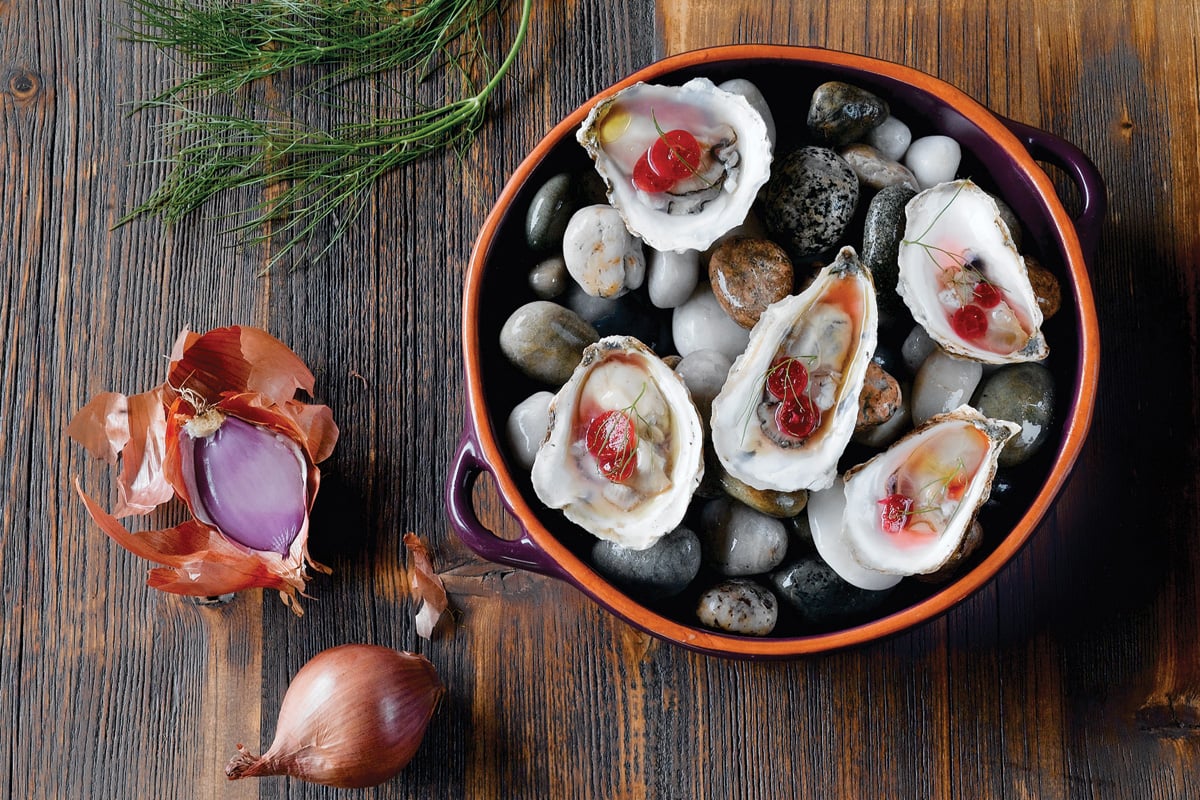 Cranberry mignonette with sage oil from Table in Barrington.

Boil water and add fresh cranberries and sugar. Reduce by one-third volume.
Strain into a bowl and reserve cranberries for garnish.
Chill in refrigerator.
In the meantime, whisk together Champagne vinegar, salt and pepper in a mixing bowl, and then add chilled, strained cranberry juice.

Blanch 1 bunch of sage in boiling water for 30 seconds. Transfer sage immediately to an ice bath and chill.
On a low setting, blend blanched sage in a blender.
Slowly add canola oil or olive oil. Once sage is pureed, and you have a dark green oil, stop and immediately strain so the oil is free of particles.
Slice reconstituted cranberries for garnish.

Shuck oysters, and reserve to the side.
Render ¼-inch diced smoked applewood bacon in a saute pan; once crispy, drain on a towel.
Dice leeks and wash thoroughly.
Slowly cook the leeks and tarragon in the cream, melting them down while reducing the cream, and season with salt and pepper.
Add the oysters and bacon to the leeks to infuse the flavor.
Place the oyster shells on a plate with salt or seaweed underneath to provide a flat area, and add a pinch of wakami to each shell.
Scoop one oyster and bacon and leek cream back into the shell, and top with diced tomato.

Heat 1/2 inch of canola oil to 375 degrees in heavy pot or skillet.
Whisk together buttermilk and hot sauce and add oysters to this mixture.
Dredge oysters in cracker meal, pressing lightly to ensure they are well coated.
When oil is up to temperature, fry for 1 minute, turning if one side is getting more color.
Using a slotted spoon, remove oysters to paper towels. Sprinkle immediately with kosher salt.
Serve with lemon wedges and tartar sauce.

Soak and light oak chips under grill.
Saute garlic and butter in a pan, then drizzle garlic and butter on each oyster in place on the grill. Cover, and let the oysters smoke for about five minutes. In the meantime, whisk together heavy cream, mayo, basil, oregano, salt and pepper.
Remove oysters from heat and drizzle on the compound mayonnaise.

Connecting diners to Rhode Island’s oyster farms and the restaurants that serve them.
By Amanda Levenson

Put away the hiking gear and sneakers; the only equipment required for this trail is an appetite. The Rhode Island Oyster Trail, or RIOT, is a free, self-guided trail that connects oyster addicts to more than a dozen local farms and area restaurants that serve their delicacies. Run by Bowen’s Wharf Company, the trail highlights the state’s aquaculture scene. “It’s a successful industry and already has a story of its own,” says Beatrice Wadson, Bowen’s Wharf’s marketing director. “We help tell that story to a larger audience.” The goal is to build more demand for Ocean State oysters year-round and to make them easier to find. Local shellfish can also be tasted at the annual Newport Oyster Festival, held in May on Bowen’s Wharf. “You get to meet the farmers and the growers, and understand your food source directly,” says Wadson. rioystertrail.com

“Oysters change sex as they grow, starting as males then switching to females; however, the females can change back to males again if there aren’t enough males in the population.”
–Dale Leavitt, professor of marine biology and aquaculture extension specialist, Roger Williams University