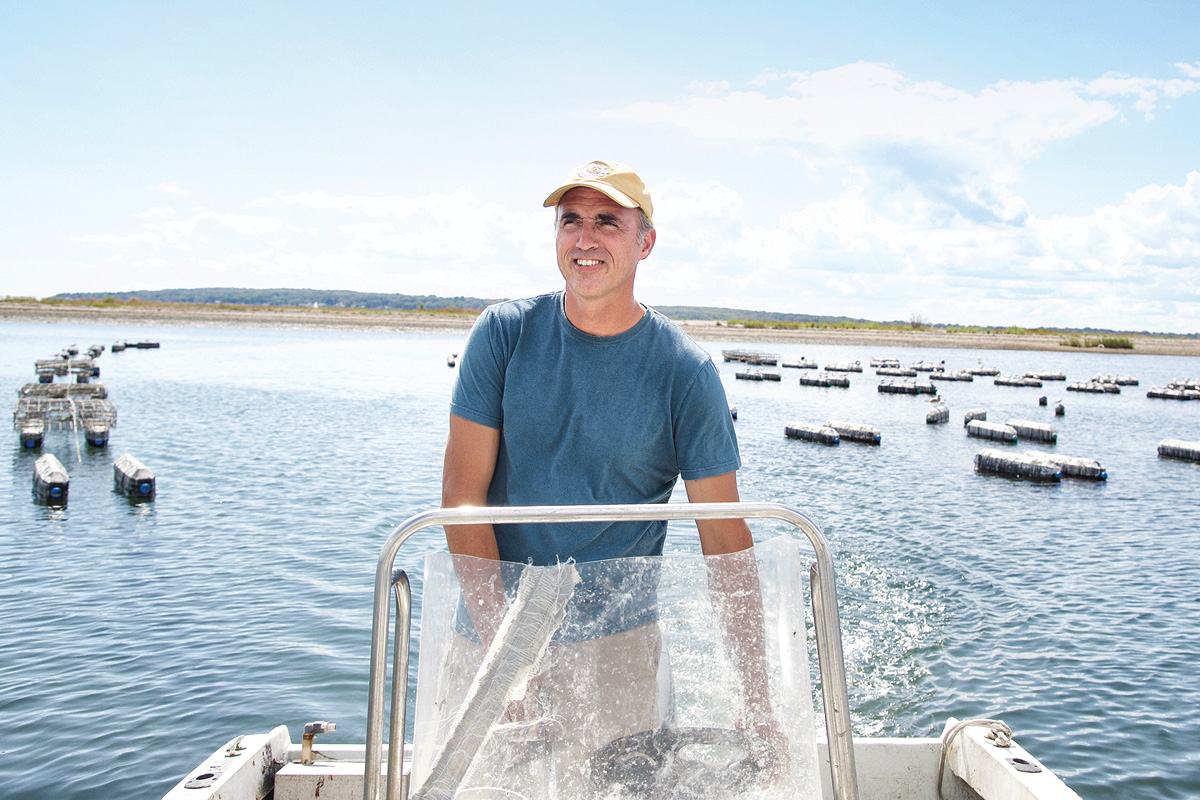 Oyster farmer Kyle Hess motors out from Bristol Harbor toward a cove on Hog Island where a sandbar almost completely encloses the body of water. The boat approaches a grouping of 250 pontoon-like cages floating on the surface of a five-acre area of the bay, tied together in a grid. Seagulls and cormorants conduct an aviary orchestra while resting their wings on top of the racks. This is Chessawanock Island Oyster Farm, one of Rhode Island’s first aquaculture operations to primarily use floating gear.

“This is a great site because we are surrounded by land,” Hess says, pointing along the shore to undeveloped acreage of brush and wilderness, owned by his family, which founded Hog Island. “Waves crash on the shore before they can come in and pummel gear. It helps with preventing the wear and tear on lines, anchors and shackles and all the things it takes to hold them down.”

Not only is this cove an ideal spot for aquaculture, but the method Hess uses is a revelation, too. After taking an aquaculture course at Roger Williams University with aquaculture extension specialist and professor Dale Leavitt, Hess obtained the lease for the oyster farm in 2012. For the last five years, while working a full-time desk job, he’s been growing oysters along the surface in OysterGro cages, which puts them right in the heart of bioactivity.

“This is a great office,” he says, pointing toward the bay. “I always enjoy being on a boat. You’re handling your product just like a normal farmer, so you’re able to see firsthand how it’s doing.”

Oysters eat phytoplankton and the organisms tend to concentrate at the top where sunlight hits the water. “That’s where it’s warmest, so that’s where phytoplankton wants to be,” he says. “Suspending the oysters in that top foot of the bay gives them access to the most nutrient-rich water that they can get.”

More food leads to bigger oysters, and Chessies often grow three inches or more in just a year to a year and a half. Hanging out at the top of the water column also exposes them to more flow, and getting knocked around by the current helps develop his oysters’ deep cups and thicker shells — and, in turn, their meat.

Hess and a team of four other farmhands tumble, clean and grade (sort) the oysters on a monthly basis, rotating their way around the farm. A homemade barge holds the hopper, where shellfish is carried up the conveyor into a tumble sorter. The cylinder spins and knocks off the leading edge of the shell to further promote cup shape and growth. Then they are cleaned using high-pressure seawater and sorted by size in bags using a high-tech optical grade finisher, before they go right back into the water to grow some more.

Hess started with 400,000 seeds last year and his yield is usually around 50 percent, but a recent expansion from three to five acres will improve his rates in the coming years. “I am hoping to double my numbers, but it will take a couple of years to work into it,” Hess says. He is currently growing an additional 1.1 million babies from oyster seed in a solar-powered upweller nursery under a dock on Hog Island, where there is no electricity. A battery-powered water pump charged by solar panels forces seawater flow over the babies, keeping them clean while also providing a food source.

From the upweller, they will head into different sized bags that go into the surface cages. Once the oysters grow to the desired size — three inches or more — they’re harvested and brought to restaurants like Bristol Oyster Bar and distributed by Tony’s Seafood in Warren. “Bringing product into Bristol Oyster Bar is nice because we get to tout the fact that the local waters are a contributing factor to the great taste of these oysters,” Hess says. “What we really want people to know is that a Rhode Island oyster is a great oyster.”

“Oysters and bears have something in common: They both hibernate. That’s why in the winter months you tend to get a fuller, plumper oyster than you do in summer.”
–Jeffrey and Thomas Gardner, Watch Hill Oysters