These local coffee spots are changing the roasting, grinding and brewing game by bringing quality beans to the Ocean State. 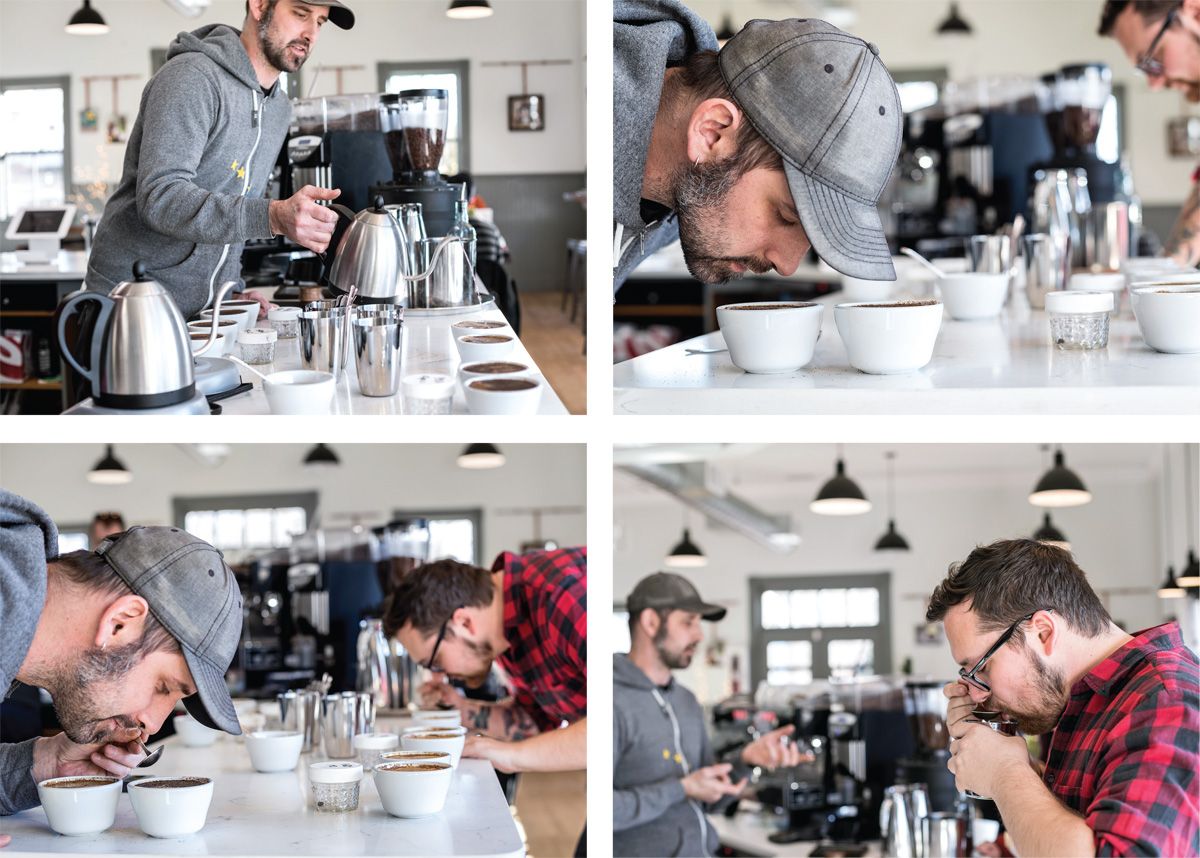 It’s 7 a.m. inside Borealis Coffee Roastery and Cafe in Riverside, a train-station-turned-tanning-salon-turned-coffee-shop located right along the East Bay Bike Path. Coffee roaster David Marcotte is preparing a cupping demonstration alongside shop owner Brian Dwiggins. A shiny small-batch German Probat roaster, which looks like a steam engine, rests nearby. It roasted the beans we’re about to sample.

Five types of beans from all over the world, including Honduran, Ethiopian, Sumatran and Colombian, plus Borealis’s Overnight blends are being weighed, ground and placed into little white ceramic cups in their dry form. The cups are arranged on the counter in front of us with a stack of spoons while water boils inside a carafe.

“This is a cupping that levels the playing field,” says Dwiggins, an Alaska native (hence the reference to the aurora borealis in the shop’s name) who developed his passion for coffee culture in his home state. “It’s the coffee standard for tasting coffee.”

Dwiggins has a background working in the film industry as a set-lighting technician and he’s served his hand-roasted, small-batch, artisan beans on sets including Ghostbusters, which was filmed in Boston. He still supplies coffee to film sets, and he sells a roast named after his film industry friends: Team Crafty.

First, we sniff the dry aroma of the grounds in the cups by bringing our noses down to the rims and inhaling. Then Marcotte adds hot water to the grounds — a four-minute steep in 205-degree water to be exact — and we wait for a crust to appear at the top, which we break with a spoon. “The break is physically breaking that crust, which has trapped all the aromatic gasses underneath,” Dwiggins says. We lower our noses down to the cups and inhale the wet aroma of the coffees. “You’ll get a pronounced aromatic infusion into your nostrils,” he says. Then we clear the grinds with two spoons skimmed across the surface of the cups.

The next step is to let the coffees cool, and then we sample all five blends with a spoonful each, immersed from the top. “You slurp, sort of like a wine tasting,” Dwiggins says. “The point of the slurp is to suck it in with force so it coats the entire inside of your mouth, because different parts of your mouth have different flavor receptors.”

It sounds like a chorus of soup slurping with a few rookie coughs in between from yours truly. We slurp again after the coffee is tepid, while recording tasting notes on each one, so we can discuss the flavors and aromas we experience: The Honduran is thick and chocolaty with notes of apricot; Ethiopian is citrusy, while the Overnight tastes a bit like dark chocolate. Colombian is nutty like regular coffee. Everyone might have a different perspective on flavors, and that’s okay. The point of it is to experience the differences in the blends.

Borealis teaches newbies from the grounds up. It’s a win when guests forgo cream and sugar to sip the true flavors.

“There’s a reason I have eleven different coffees right now,” Dwiggins says. “Because they all taste differently; how we roast them and brew them all makes a difference.” 250 Bullocks Point Ave., Riverside, 919-5779, borealiscoffee.com