Silver Spoon Bakery created The Compliant Cupcake, which was officially TSA-approved on Saturday morning at TF Green airport in Warwick. 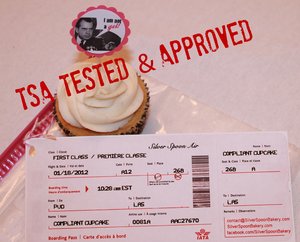 A Rhode Island bakery has come up with a solution to ‘Cupcakegate.’ Silver Spoon Bakery created The Compliant Cupcake, which was officially TSA-approved on Saturday morning at TF Green airport in Warwick.

The treat was created in response to an incident that has been gaining national attention, in which Massachusetts resident Rebecca Hains’ cupcake was seized by authorities at an airline security checkpoint to Las Vegas. The frosting was considered to be a gel and it exceeded the allowed three ounces permitted for carry-on.

Thanks to Silver Spoon Bakery, incidents like this can now be prevented. The Compliant Cupcake is made of vanilla bean cake and topped with less than three ounces of vanilla bean frosting. It’s sold in a quart-size, clear, zip lock bag to obey the TSA 3-1-1 rule. It also comes with a flag picturing Richard Nixon saying ‘I am not a gel!’ ” and its own TSA-approved boarding pass.

On Saturday morning, one of the bakery’s fans brought the Compliant Cupcake through security at TF Green on his way to Florida, according to Silver Spoon’s baker Kelly Colgan, who was watching nearby. She says TSA officers said there have never been any problems bringing food on board planes. The cupcake was placed in a bin, sent through the scanner and it passed the test with a thumbs up.

The cupcake has been written about on The Huffington Post, The Providence Journal and The Los Angeles Times. Colgan says a U.S. Airways pilot has also ordered three dozen to give to his crew.

“I’d love to have it in airports,” Colgan says, adding that they once had a Big Blue Bug cupcake for sale, too. “This has been sort of a launch pad for other spoofy cupcakes. It has confirmed that our ideas are working and that people like them.”