The new Asian outpost joins downtown's restaurant row with playful dishes that borrow from many cuisines.

It’s no surprise that O’Boy found a home on Westminster Street. In three short blocks, a multicultural revival has taken place: Korean food sidling up to Italian; Greek food juxtaposed with pizza; Chinese bao sitting alongside craft beer joints. But O’Boy is a microcosm all its own — a laboratory in which mutually exclusive cuisines marry into unexpected hybrids. Jae Choi, a graduate of Johnson and Wales, is the mad scientist in charge, intent on proving that heritage is an international affair and that no dish lives in a hermetically sealed bubble anymore.

Choi approaches food the way the Barnes Foundation celebrates art: symbiotically. The kitchen is fundamentally Korean but it exists in a world that communicates openly with European tradition. The concept is not totally new; it’s been almost thirty years since Jean-Georges Vongerichten mixed French and Asian food. But Choi is assessing what the mainstream has to offer rather than the other way around and that dynamic is far more interesting when it comes to the trajectory of twenty-first century food. 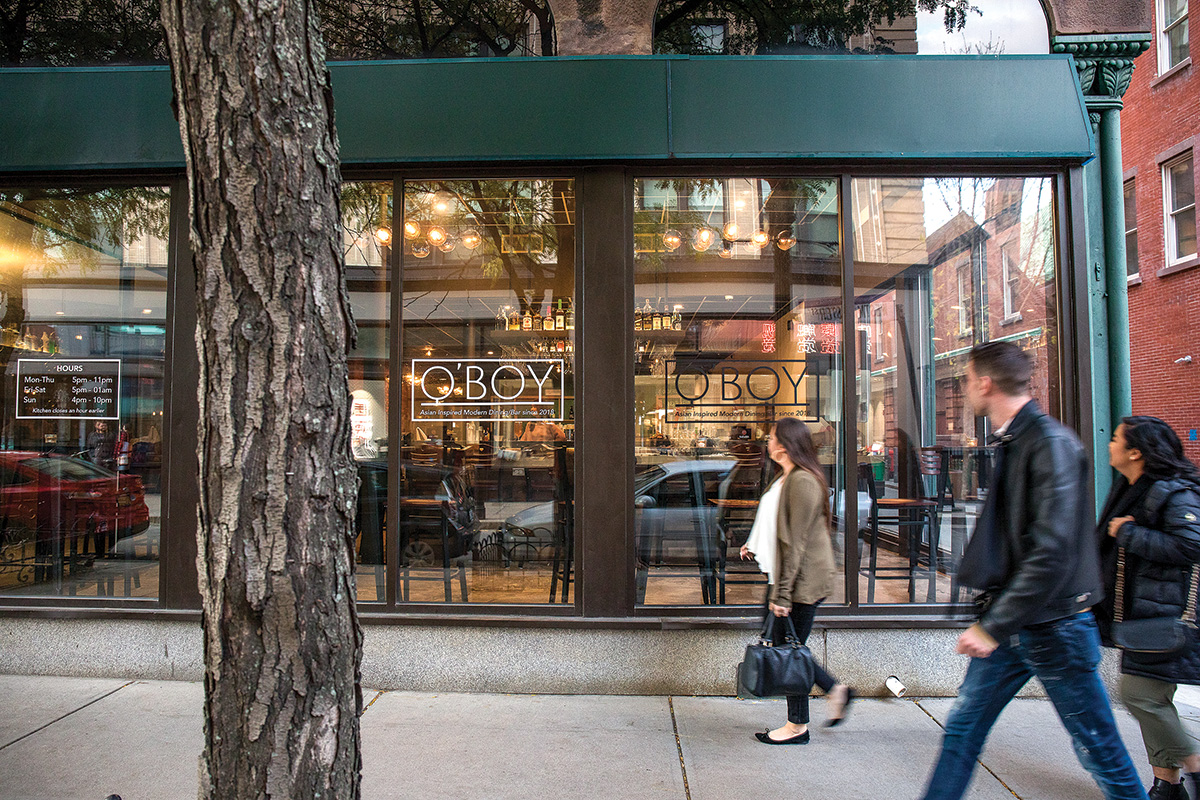 The restaurant itself has a Gen Y aesthetic, respectful of the past with its brick walls and filament bulbs but determined to move forward. Dishes are never dismissive of their progenitors, but they do present with panache. Beef tartare ($14) is a whimsical deconstruction that conflates several cultures in a culinary fete. A puffed rice disc mimics a pizza shell dotted with cold cubed beef, bits of mango and pungent mustard. A mixture of sesame oil and egg yolk is served alongside to bind the disparate ingredients and their origins alike.

Plates are presented as works of art, a yin and yang of color, space and texture. Roasted carrots ($9) are a form of Modernism, nestled on one side of a white plate like burnished burdock root. Drizzled with wasabi cremeaux, it’s a homage to subterranean vegetables, cooked so deeply that they taste of little more than distilled sugar of the underworld. Even rolls and butter ($8) are elevated at O’Boy, plated alongside a head of roasted garlic with hot pepper and a lake of olive oil. The condiments suggest Italy; the black seed sesame buns channel Asia. Choi is determined to prove that geographic boundaries have no impact on the palate other than to expand it. 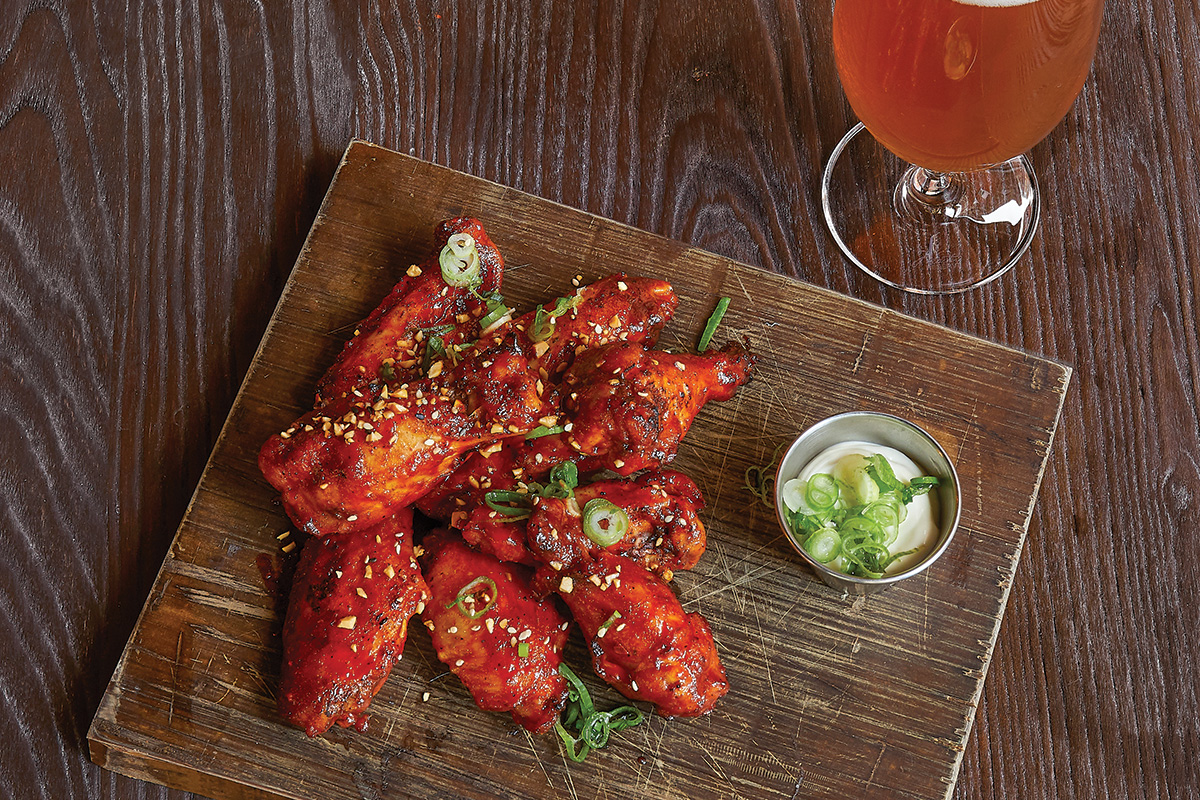 The challenge for customers is that O’Boy defies linear construction. You can think of a meal in three courses but that benefits nothing other than the status quo. This is food meant to eat in a group as the basis for conversation. Tamagoyaki ($9), a rolled Japanese omelet, is familiar enough to stateside diners but Choi embeds his with bonito flakes and serves the delicate egg in miso sauce with braised cabbage. It’s wholly Asian but invokes some element of onion-soaked pierogis — a comparison that might be wishful thinking if Choi weren’t so insistent on peppering his native cuisine with international ingredients such as Parmesan, pancetta and goat cheese.

If the restaurant’s physical space doesn’t have a lot of ornamentation, that’s intentional minimalism. Its sparse design speaks to the manner in which O’Boy builds a meal. Appearance is one component; ingredients another; the method of eating yet one more. The namesake O’Boy bacon ($21) operates in much the same way, a series of elements that evolve as they move through an assembly line of dining. More braised belly than a hard sear, the salty pork is served in slabs alongside lettuce leaves, spicy bean sauce and sweet mango-pear salsa. Each bite is different, as reliant on construction as on execution. In short, it’s a joint effort between chef and guest, communication that is translated differently every night. 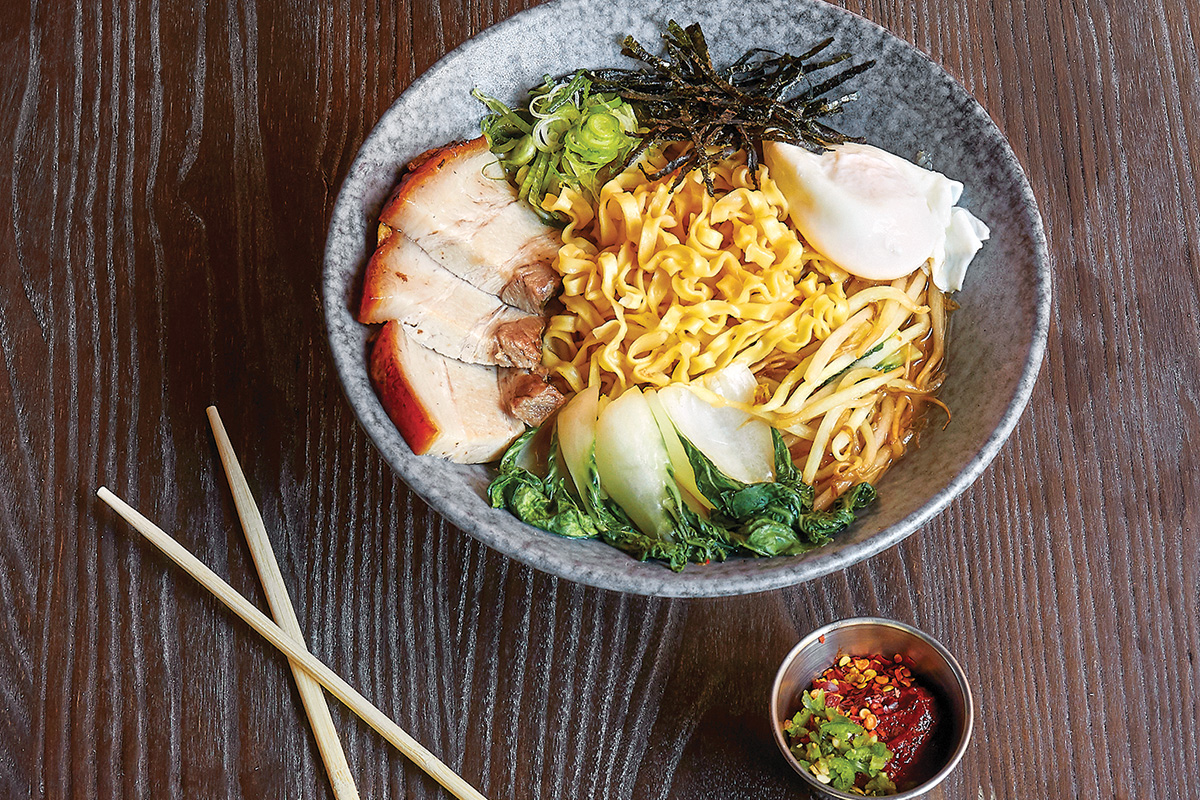 That’s not to say everything is up for interpretation. Sous-vide sirloin ($17) is served with a soupy dumpling on top, which opens onto the steak and adds richness to whiskey shoyu greens. It’s a refined example of native ethos that’s still strikingly familiar to the American consumer. “Definitely my favorite dish,” says one enthusiastic diner sitting in front of half a dozen plates. “I can’t remember the last time I went to a steakhouse, but I’m pretty sure I can’t live without this.” Tornado o’murice ($13) tells a similar story in a totally different tone. A dome of tomato-based rice is draped with a fluffy omelette and readily proves that people across the globe define “comfort” in strikingly similar ways. “Uh oh,” says the same young man with sudden angst. “This is the food I want to find in my fridge when I get home on a Saturday night.” (If you doubt the collegial, collegiate spirit of O’Boy, look for the tables of twenty-somethings testing the mettle of their tastebuds with the Spicy Challenge, which changes monthly. This time it’s a platter of flaming Korean chicken and rice.) 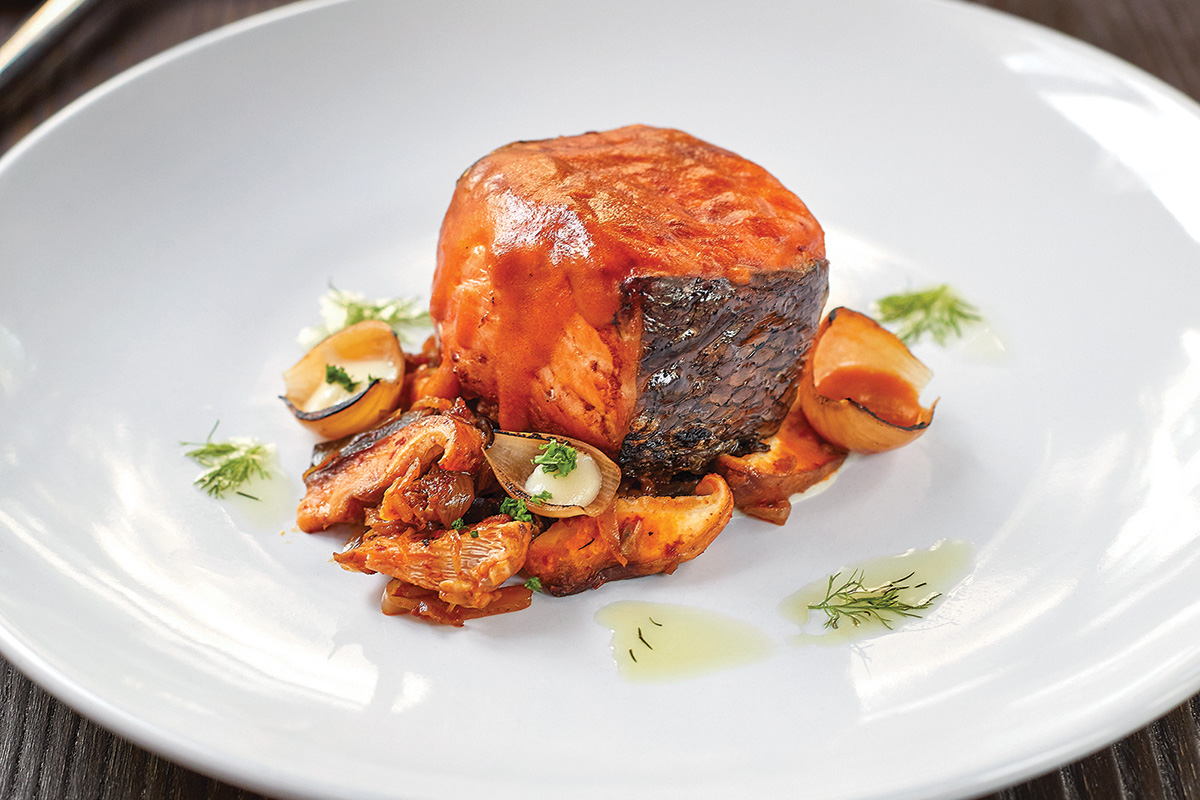 But nothing manifests Choi’s approach more readily than dessert, which functions, without exception, as a repository of kitsch and modernity. Tiramisu with puffed rice brittle ($12) swaps out mascarpone for black sesame cream while cheesecake is piped into logs and paired with jellied fruit. Matcha and cream cake ($6) is a dense wedge of birthday-worthy dessert decorated with happy dots of pastel frosting. Yet the frosty bowl of bingsu ($7) — shaved creamy ice — is the dish most likely to put a smile on the face of a cynical millennial college student. It’s covered in various crumbs and tastes like Fruity Pebbles would, after spending the afternoon in a snow drift. 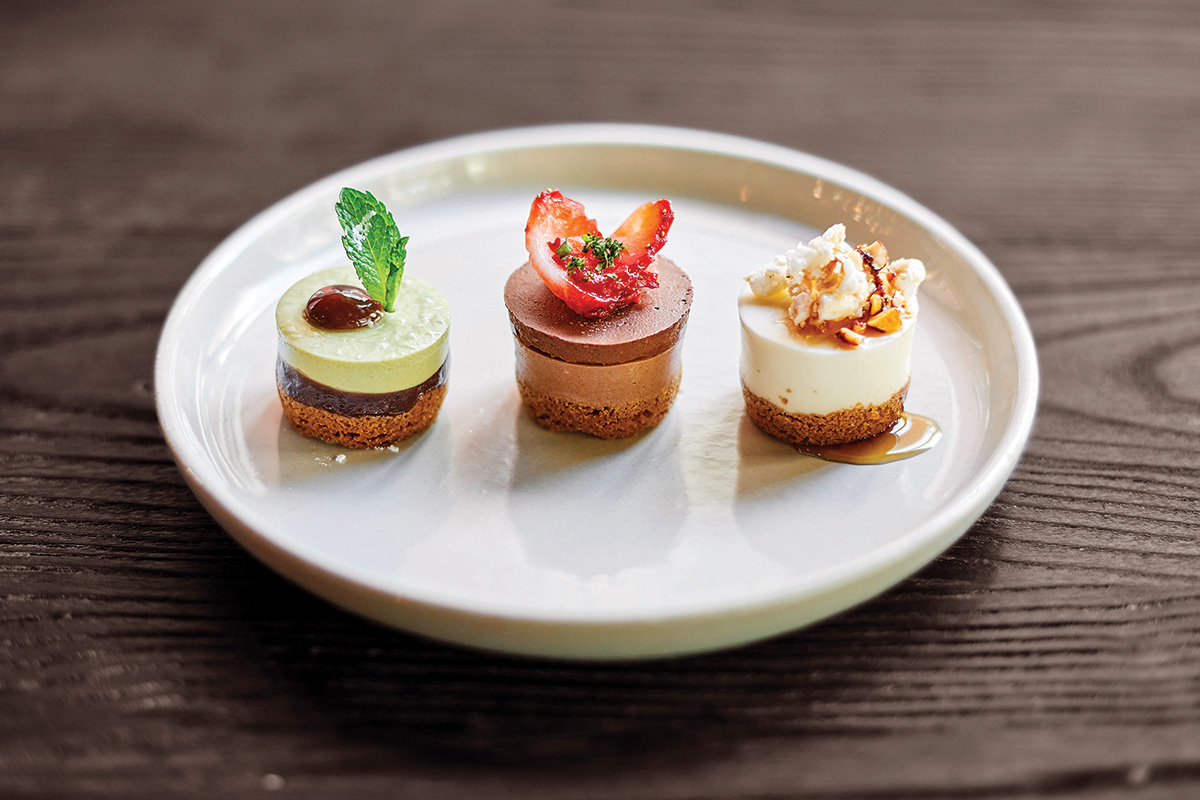 Not the average cheesecake. Photography by Angel Tucker.

This is the lens Choi uses to transliterate American eating habits into something from the Far East. He doesn’t do so to gain favor or to forfeit authenticity. He creates a spectacle on every plate, not for the sake of surprise but for the simple purpose of delight. If an older generation sees food as territorial, then it falls upon the younger generation to prove, one dish at a time, that culture is an ever-expanding identity that relies on outside influences to evolve. Diners drawn to the status quo may be disoriented by O’Boy; but those who seek new horizons have found their happy place.