The airy layout makes the most of the bay views.

It’s safe to say that a 1920s brick duplex with an aluminum-sided addition stuck to the back was not one East Side couple’s idea of a dream home. But when they found just that in Cranston’s picturesque Edgewood neighborhood in 2013, complete with a priceless view of Narragansett Bay, they, with a little help from their architect, Mary Brewster, began to see the true potential of such a structure.

“I always love these projects where I’m taking something and completely transforming it,” Brewster, the founding partner at Brewster Thornton Group Architects, says.

To tap into that potential, Brewster came up with a design, executed by contractor Deslandes Construction, that honored the home by keeping the historic shell and rooflines intact so that no space went unused. But that’s not to say it didn’t include some major renovations, starting with shifting the front door 90 degrees so that it faced the street, as well as moving the staircase and fireplace and giving the rest of the interior a major facelift. The result is an addition that’s nearly unrecognizable from the original.

“It was a real time commitment on the part of the owners to get it done, but in the end we really reimagined this house,” says Brewster, who had worked with the couple on two previous homes. 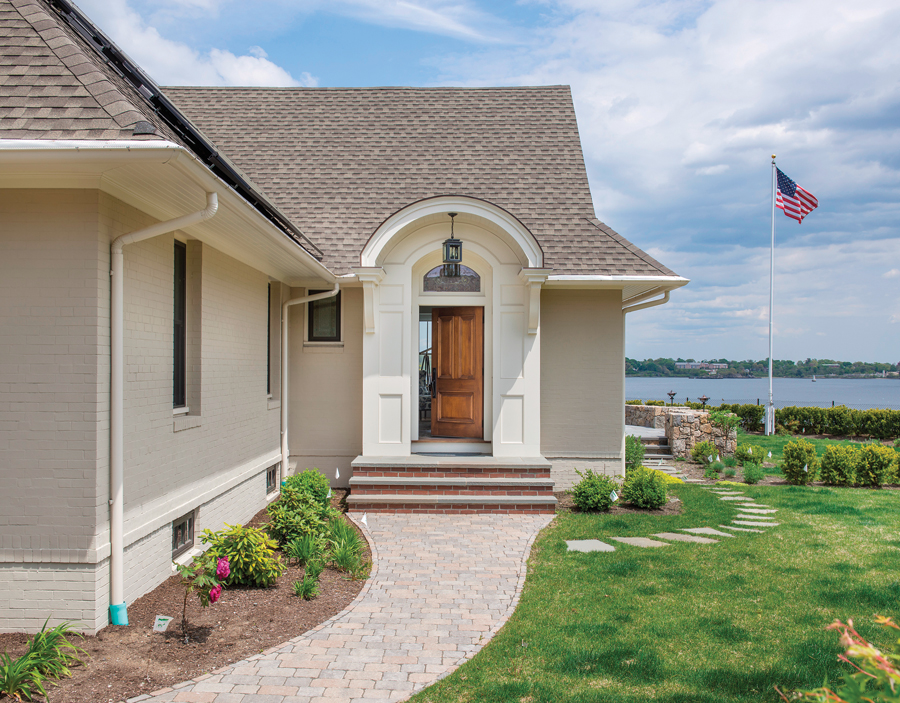 Before renovations. Cooped chickens and hives of bees also have a home on this Edgewood property that overlooks the bay and includes a dock where the owners keep their boat.

When you live on the water, a vacation home just isn’t necessary. Instead, the owners opted to transform the backyard into a three-season oasis. An in-ground pool was replaced with a patio with seating, dining area, fire pit and a gas-line grill, while the rest of the home’s exterior was also updated. The once box-like addition stayed, but was enhanced with a second-floor balcony and peaked roof over the master suite. Additional roof windows give another bedroom a balcony-like view. Instead of doing away with the red brick, the owners gave it a coat of mineral pigment that matches the siding in the back.

Bronze-colored window frames are a unique detail that speak to the open-mindedness of the owners, according to Brewster: “They always listened to us and were willing to go out on a limb to try things that were different.”

Keeping in the spirit of conservation that guided the project, solar panels were added to the roof and a geothermal heating system was installed in the lawn, where the owners also share a vegetable garden with the neighbors. 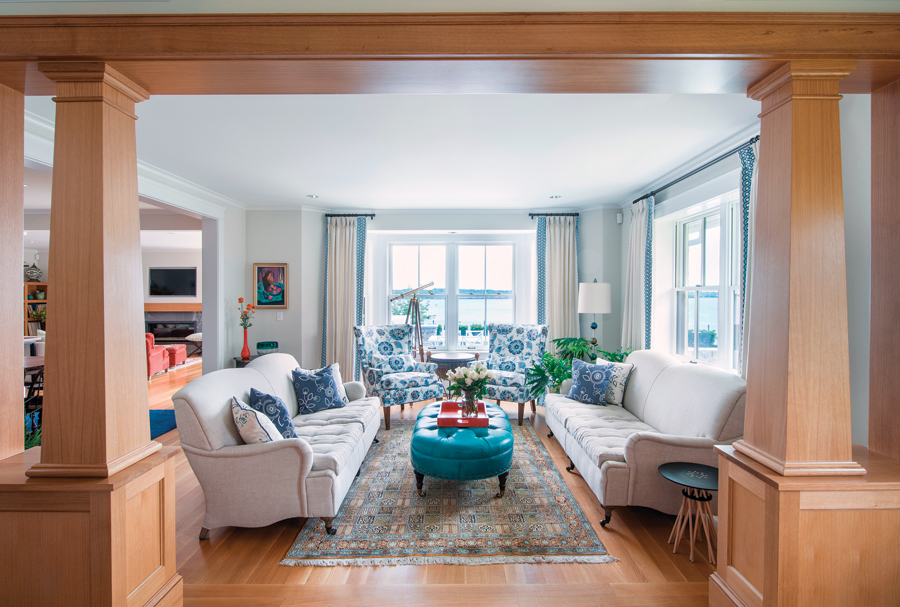 An airy layout greets visitors who pass through the mahogany front door. “The home was designed to have a slightly more formal entry and living room that opened up to a space with more flow that became more contemporary as you moved through,” explains interior designer Kevin O’Brien. Quarter-sawn white oak was used for the casework that frames the living room entrance and throughout the house in the flooring and kitchen cabinets, as well as the built-in bookshelves in the family room that house many of the family’s keepsakes. There, a gas fireplace tucked inside a mantle made of single-slab leathered jet mist granite serves as a centerpiece.

The jaw-dropping view is kept in sight throughout the house by way of windows that line the south wall all the way to the master suite at the back. The spa-like color scheme in both the bedroom and bath enhance rather than distract from the bay vistas, which can even be seen from a window in the glassed-in shower. 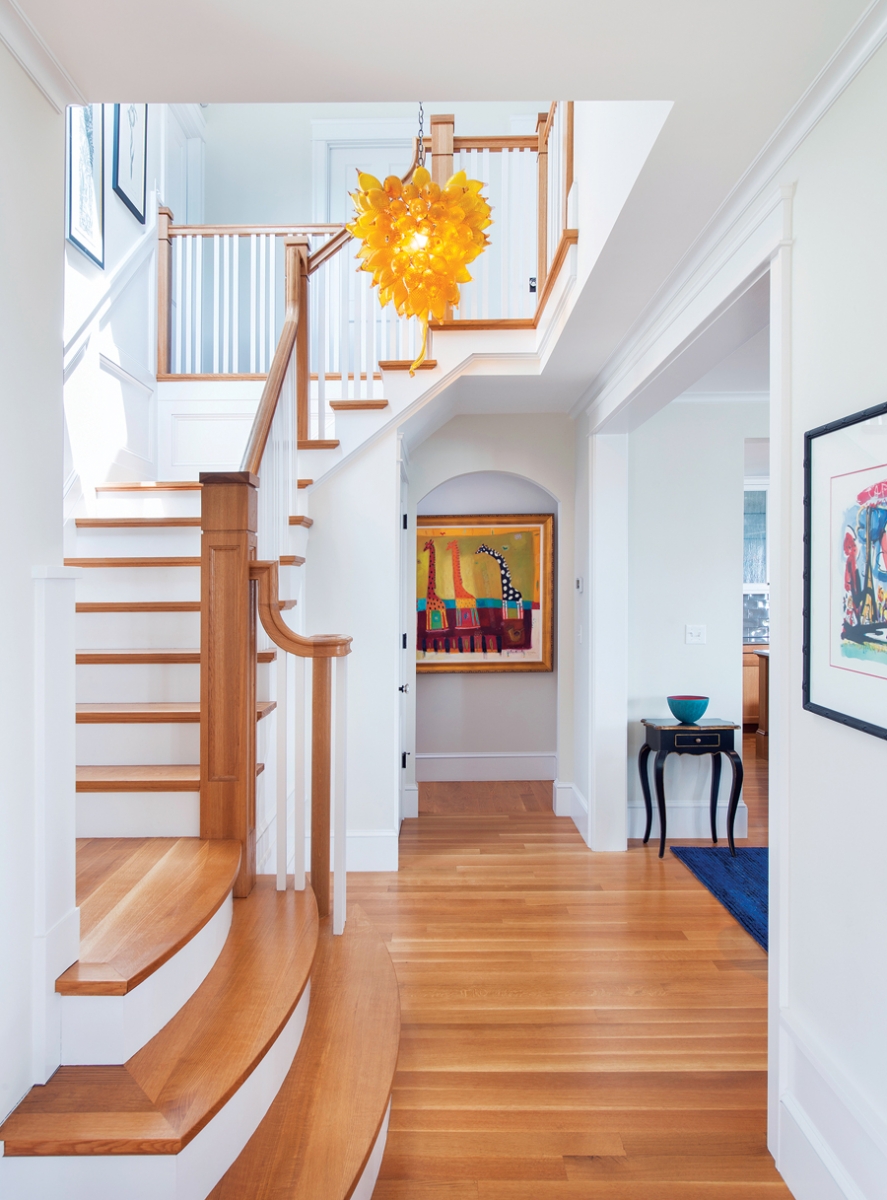 Avid collectors, the owners are constantly on the hunt for unusual items during their travels and at local art and antiques shows. One such find, a custom blown glass chandelier by Strini, takes center stage by the staircase.

In designing the interior, the owners “wanted a simple background to showcase these objects, a canvas for them to play with,” O’Brien says.

As frequent entertainers with three college-age children, they felt it was important to have plenty of space to host parties, with a layout that could be easily customized depending on the function.

In the kitchen, a table-height counter serves as a sideboard to hold dishes within reach of the table, and a pantry off the back of the kitchen includes an extra dishwasher, sink and oven, where caterers can work out of sight.

A dining room table by Providence-based Lorimer Workshop has been the scene for many a dinner party. For larger holiday fetes, the space allows for the accommodation of as many as forty by way of leaves and two console tables that reside behind the family room couch.

The couple’s penchant for hosting is no surprise. It is, after all, a home — and view — worth celebrating.