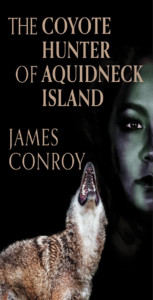 By James Conroy
Aquidneck Island author James Conroy tells the story of Micah LaVeck, who lives alone in a cabin on Aquidneck Island, transcribing antique journals while living with a nerve and muscle disease. Because a large population of coyotes threatens the animals and birds of the island, the mayor decides to hire a professional coyote hunter, a Native American named Kodi Red Moon. Micah agrees to let the hunter stay on his property, and he finds himself strongly drawn to her. This passion is
interrupted by a reporter, locals outraged at the hunt and an ex-girlfriend, building a climactic story that takes place close to home.