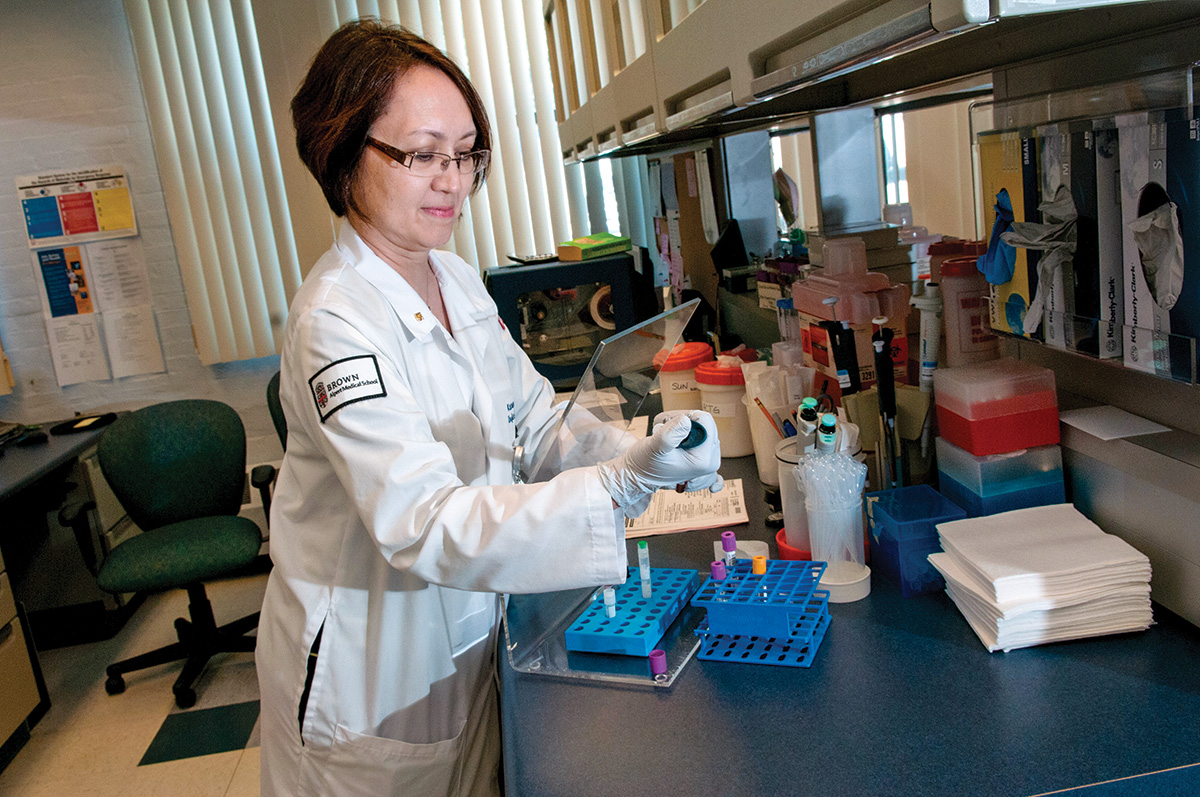 In 2013 and 2014, Bailey responded to the West African Ebola outbreak. “People presumed things were getting done by others because they seemed like the obvious things to do,” he says. “We later found out that everyone was thinking about the obvious things, but no one was doing them.”

Bailey, who is a practicing physician in transfusion medicine and coagulation at The Miriam and Rhode Island hospitals, didn’t want the same thing to happen when a different pandemic reached their doorstep. So since March, he has headed the COVID research task force for Brown, coordinating the University-wide effort to better understand, treat, and manage COVID-19.
“People across Brown started to think ‘how can I bring my expertise to bear, and how could that be impactful?’” he says.

As the task force reviewed proposals for COVID-related research, not only did they look for projects that might seem obvious to researchers and academics at The Warren Alpert Medical School, but they stretched across the University to review and then fund COVID-19 investigations in disciplines like engineering and computer science.

Brown researchers worked to create the Lifespan/Brown COVID-19 Biobank based at Rhode Island Hospital. Patients coming into emergency departments there and at The Miriam were asked to donate blood samples for research to create the biorepository. Researchers statewide can apply to use samples from patients who tested positive or negative for the virus. The project worked so well that Brown helped an organization in Nebraska set up a similar biorepository plan.

In the School of Engineering, researchers designed ventilators using 3D printing and off-the-shelf parts that could be made quickly and locally. A group from the Department of Computer Science developed an artificial intelligence platform to differentiate COVID-19 from viral pneumonia on a chest CT scan and use that information to identify early-stage patients who are likely to transition to severe COVID-19.

A team from the Brown Center for Biomedical Informatics established an inter-institutional informatics infrastructure to support COVID-19 research in Rhode Island through electronic health data, digital health technology, and data science techniques. Another group from the Department of Molecular Biology, Cell Biology, and Biochemistry worked to develop a sample unit for a potential COVID-19 home testing kit. 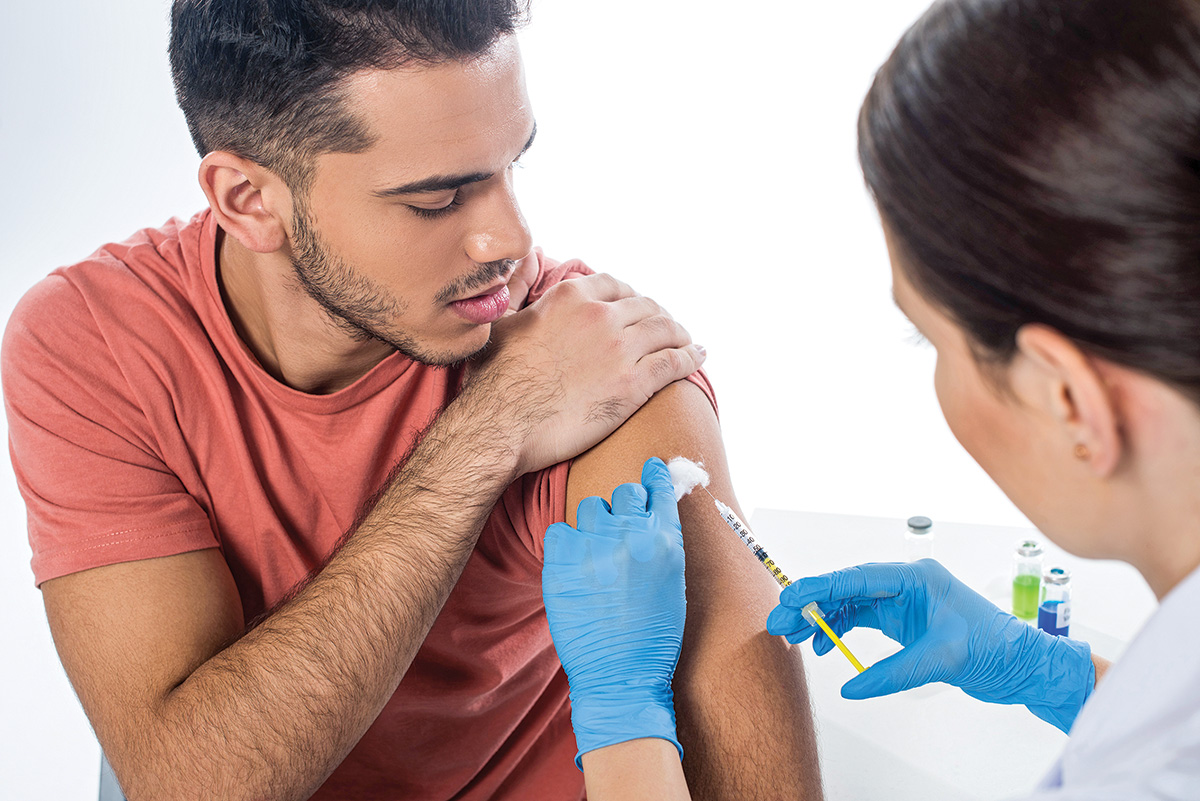 The idea of using convalescent plasma has been around since the 1918 influenza pandemic, when doctors gave sick patients plasma from those who had already recovered from that century’s most deadly virus. Their theory was that the transfusion would help sick patients struggling to mount their own antibody defense by giving them the antibodies of someone else who already made it through to the other side.

Doctors in 2020 found themselves in a similar situation as their colleagues in 1918: with no proven treatment or vaccine for COVID-19, they looked to treating patients with the plasma of those who had already survived it.

Knowing when to give patients convalescent plasma (CP), and how effective it might be in different phases of the illness, are the key points of the current studies, which are taking place at multiple health centers. Adam C. Levine, MD, MPH, associate professor of emergency medicine and director of Brown’s Division of Global Emergency Medicine, is running the trials here.

In one, CP is given to individuals who have had high-risk exposure to COVID-19, like if they live with someone who has tested positive for the virus or if they’re a health care worker. These subjects are enrolled in the study and randomized to CP or standard plasma before they show any signs or symptoms. The goal is to see if giving antibodies to people exposed to COVID-19 can work as prophylactic treatment, to prevent an infection from taking hold.

“Little Rhode Island has made a big impact…I’m really proud of that.” — Karen Tashima

“Given that so much transmission happens within a household, and we don’t really have a way to prevent that, and frontline workers are putting themselves at risk, this could be a powerful way to prevent those infections,” says Levine, who also worked in Liberia during the Ebola outbreak in 2014. If this kind of preventive measure works, he adds, it can also help health care workers feel more confident about continuing to do their jobs.

In the second study, participants who recently tested positive for COVID-19 and have mild symptoms are treated with CP in their first week of disease to see if it prevents them from getting severely ill.

“Based on what we know about convalescent plasma from other diseases and from this disease, it’s probably more likely to be effective early in the course of the disease, before the viral load is too high,” Levine says. “Then the antibodies have the best shot at neutralizing what is there.”

REDEPLOYING REMDESIVIR
Karen Tashima, MD, a professor of medicine, calls remdesivir a “drug looking for a disease to treat.” The antiviral was developed in 2009 by Gilead Sciences in hopes of treating RNA-based viruses that could spark global pandemics. It didn’t work as well as antibodies for Ebola in a 2014 study, despite showing activity in the lab.

“Why not try it for COVID-19?” asks Tashima, who is the director of clinical trials at the immunology center at Lifespan and clinical research site leader for The Miriam Hospital.
That’s exactly what she and her colleagues did as part of a global study. In it, 397 people hospitalized for COVID-19 received remdesivir for five or 10 days. The goal was to determine how long patients should be given the drug. Researchers found that in patients who didn’t require ventilators, giving remdesivir for five days was just as effective as 10 days.

“We can’t say how effective it was in this study because it was not compared to a placebo, but we know that after five days, people had very few adverse reactions, and that five days is just as good as 10 days for patients who are not intubated,” Tashima says. These results can stop patients from getting medication in doses they don’t need, especially a medication that at times has been in short supply.

The study was conducted at the height of the spring outbreak, and brought a potential treatment into Rhode Island’s hospitals that might not have been available otherwise. “We really wanted to have a treatment available to patients in Rhode Island because what else could we do?” she says. “We wanted to have something to give patients that wasn’t just supportive care. We wanted to be able to offer this drug.”

Tashima says researchers made sure to have doctors fluent in Spanish on their team, and consent forms in Spanish, to ensure Spanish speakers could be enrolled in the trial too—key since COVID-19 has disproportionally affected Black and Latinx Americans. Now Tashima is focused on the next frontier: she’s heading up a clinical trial of the COVID vaccine a
The Miriam.