Ragged Island proves that Aquidneck Island's oldest town is more hip than it seems, and perhaps always has been.

According to Merriam-Webster, the word “ragged” can be defined as: 1. Roughly unkempt; 2. Having an irregular edge or outline or 3. Torn or worn to tatters. But even on a particularly miserable rainy day, it’s difficult for me to marry such a definition with the likes of Ragged Island Brewing Co., a Portsmouth-based brewery with a sea foam green interior.

At one o’clock in the afternoon, the brewery is not yet open for business and I’m tempted to sit in one of the cozy-looking Adirondack chairs placed underneath a cool impressionistic painting of an isolated island. But instead, I follow co-owner Katie Gray over to the bar, a beach hut-like setup complete with a white wood base and an overhang adorned in string lights. My seating choice not only allows for an up-close look at the colorful chalkboard menu on the wall opposite me, but also a sneak peek at the opening in the back right corner of the room that leads to a spacious area lined with fermenters and holding tanks. I glimpse a man with an impressive beard holding out what appears to be a piece of wet bark to another man clad in a blue baseball cap. The hat-clad guy leans forward to take a whiff of the object before I manage to catch: “…took a lot more of the hibiscus smell out of it…tell Archie to only put it in there for six hours….”

Just one year into its operation, Ragged Island Brewing Co. seems to be a well-oiled machine — certainly anything but ragged.

“It’s from a combination of things,” says hat-clad guy (a.k.a Matt Gray, Katie’s husband and fellow co-owner) of the brewery’s name once he emerges from the back room and joins his wife behind the bar. “One, it has the same initials as Rhode Island, which is fitting, and two, we are located on an actual island: Aquidneck. But we took the name from a real place in Maine where our original brewmaster, John Almeida, lives. It’s a little outcropping of rocks and trees out in the Casco Bay area, very much a ragged island, and we thought it sounded like a fun, adventurous name.”

As self-proclaimed beer geeks, Matt and his childhood friend, Patrick Donovan, had long entertained the idea of turning their passion into a business venture, but it was Almeida’s homebrewed recipes that got the ball rolling. “He happens to be Patrick’s father-in-law, and one night while we were all sitting around drinking one of John’s IPAs, we talked about how it was just as good as, if not better than, what you could get in a store,” Matt recalls. “Patrick and I both had experience starting our own businesses [Gray Matter Marketing and Meridian Ocean Services, respectively], so we decided it was about time we stopped talking about doing it and actually do it. We just had to convince John to be our brewmaster.” The conversation led to Ragged Island’s opening on March 17, 2017, and to the introduction of TwoTree, the very same double IPA they enjoyed that fateful night, as their anchor brew.

Since then, Ragged Island has served up a number of unique brews by both Almeida and their now full-time brewer, Rob DaRosa (the bearded fellow mentioned earlier/the former brewmaster of Union Station Brewery in Providence). From their popular Hydrofoil (another double IPA with a malt base and a blend of citra and mosaic hops) and the trendy Zero Viz (a Belgian witbier made with orange and coriander) to the weightier Five Tsar (a chocolate-y Russian Imperial stout) and the more traditional Ruggles ESB (a lighter, sweeter pale ale), it’s clear that there’s a beer on tap for every taste. Perfect for an area that was once a bit lacking on the brew front.

“I grew up in Middletown, and Matt and Patrick grew up in Newport, so it was never really a consideration of ours to not be on this island,” Katie says. “But we’re very happy we ended up in Portsmouth. The community welcomed us with open arms and the location also provided us with an empty slate where we could really implement our vision. It’s hard to find spaces like that.”

Plus, it was a good niche-market opportunity. At the time, Portsmouth wasn’t home to any breweries, and neither were its closest neighbors, namely Bristol, Warren and Barrington. So when Ragged Island opened its doors last spring, East Bay-centric locals no longer needed to head to Newport, South County or Massachusetts for a tour and/or tasting.

“We thought we were the first brewery in Portsmouth,” Matt says with a laugh. “But then the Portsmouth Historical Society came in one day and was like, ‘Yeah, nope.’ ”

He gestures to a framed document mounted on the wall behind the bar, which he says was given to them by the Portsmouth Historical Society back when Ragged Island first opened. It reads:
“It is also ordered and agreed upon by General Consent that Will. Baulston shall erect and set up a house of Entertainment for Strangers, and also to Brew beare and to sell wines and Strong waters, and such necessary provisions as may be useful in any kind [sic].”

I later learn from the society’s president and town historian, James Garman, that William Baulston was amongst the very first settlers in Portsmouth. He, along with fellow Boston dissenters William Coddington and Anne Hutchinson, immigrated to Aquidneck Island in 1638. There, they set up the small village of “Pocasset” (renamed Portsmouth in 1639) and a democratic government that regularly held town meetings. The second of these meetings, believed to have taken place in May of 1638, gave way to William Baulston securing the very first license to make and sell liquor in the state of Rhode Island. Today, his legacy is recognized not only by the aforementioned plaque, but also with a brew: Ragged Island regularly serves an English-style porter aptly named the Baulston.

“We thought it was fitting to pay some homage to the historical attributes of this town,” Katie says. “It’s so huge around here.” 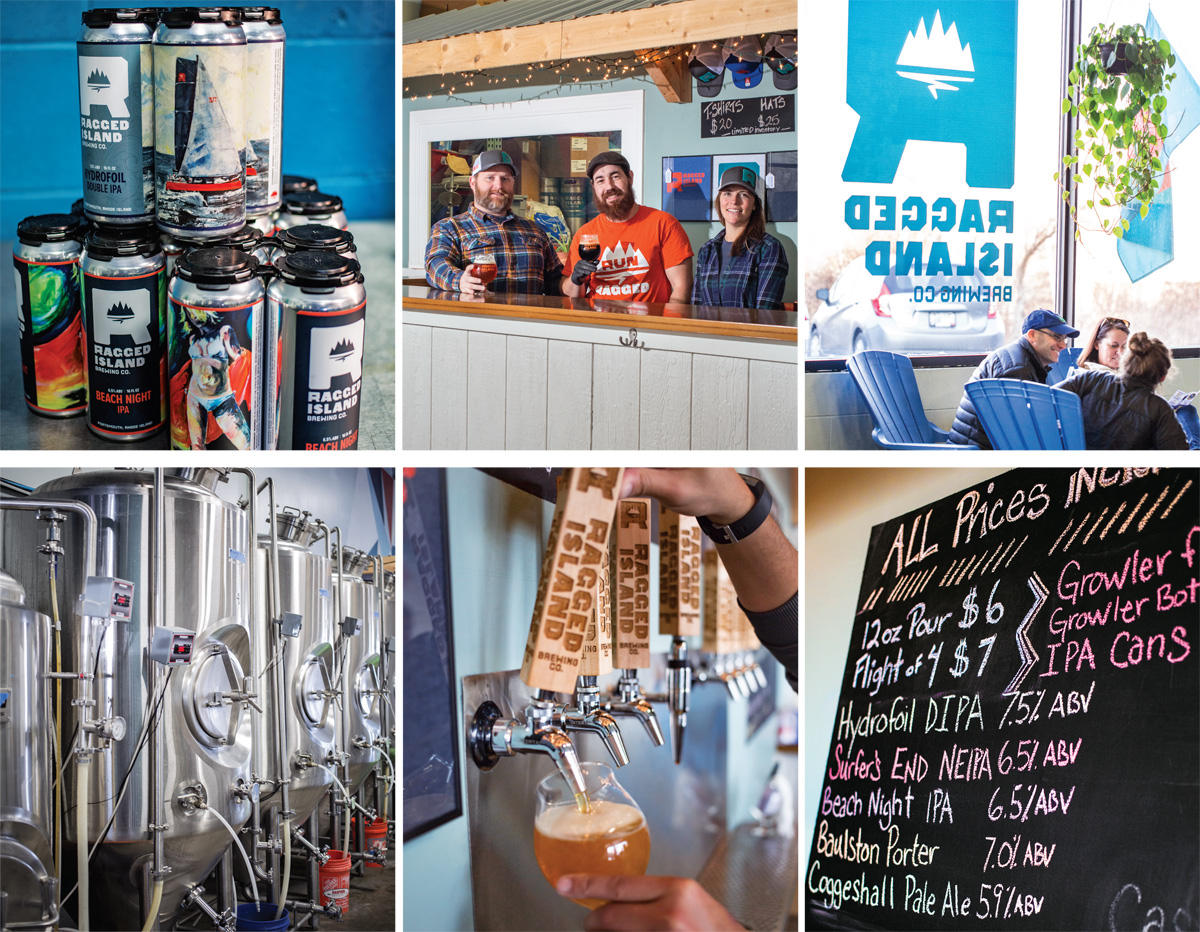 Above: Co-owner Katie Gray’s artwork adorns the brewery’s cans. Owners Matt and Katie Gray (plaid) and brewmaster Rob DaRosa (orange) behind the bar.  Adirondack chairs to uphold Ragged Island’s laidback vibe. Below: All of Ragged Island’s concoctions are brewed on premises. Hydrofoil, a double IPA, is one of their most popular brews. The Ragged Island team loves to come up with fun and quirky names for the brews. Photography by Chris Vaccaro

The second oldest municipality in Rhode Island after Providence, Portsmouth is often renowned for its part in the infamous Battle of Rhode Island. But the old world vibe sometimes gives the residential town a stuffy reputation and we all overlook the fact that it’s had its fair share of fun times (read: debauchery), too.

“[William Baulston’s] tavern must have been a success because three months [after it opened], the records of the town meeting say: ‘It will be noted that Will Baulston beer had begun to take effect and that the Stockes [as in stocks, of the disciplinary variety] authorized August 8 were in use in less than a month,’ ” Garman explains.

Luckily, stocks are no longer a thing, and appropriate beer tasting and appreciation have become more of a celebrated pastime than a punishable offense. In fact, rumor has it that a cidery may soon open in town (Dan Keating of the Newport Polo Society got permission to move forward with plans back in 2014), and even nearby Newport Vineyards is looking to hire a brewer of its own. But the Grays don’t view the potential newcomers as competition. If anything, Matt says they see it as a chance to attract even more brewery hoppers.

Besides, Ragged Island still has plenty of draw on its own. For one, the brewery just raised and donated $5,000 to hurricane relief in Texas (where their original business partners, Patrick and Liz Donovan, now live) thanks to its first bottle release called Ave Maria. Two, they have their one-year business anniversary coming up on St. Patrick’s Day, which the Grays tease is sure to produce a yummy Irish stout and a ticketed event for loyal customers. And three, they’ve seen plenty of success with recent distribution and canning ventures.

“Between people trading our beers with friends and us having seventy counts of distribution to bars and restaurants across the state, it’s been a great way to expose our brand to more people and get our name out there,” Matt says. “And if canning continues to go well, we’ll see what the next steps are. But no matter what, we’re committed to staying in Portsmouth and, you know, if and when we grow — it will be here.”