All natural condiments and cookies are made right here in Rhode Island by Rachael McCaskill. 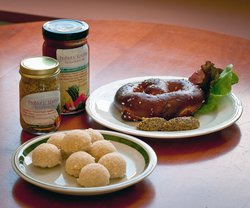 WHO: Rachael McCaskill, a 1999 graduate of Johnson and Wales University’s baking and pastry program, recently launched her own business, Rachael Bakes, featuring all-natural condiments and cookies made with local ingredients and no chemical components.

WHEN: Rachael owned a bakery in Johnston, but it closed following a difficult time with her former partner and friend.  After that, she suffered from depression and insomnia, took various medications and ate a diet heavy in refined sugars. Then she met her boyfriend, now partner, Richard Suls, and things began to look up. One night, they were watching a conference given by the Weston A. Price Foundation, a nonprofit nutrition education foundation that promotes health by consuming whole foods and animal fats. This changed the way they ate forever, and helped inspire the idea for Rachael Bakes.

WHERE: Rachael Bakes can be found at Fertile Underground in Providence, Food for Thought in Wakefield and farmers markets including the Armory and the Northwest Farmers market at Petersen Tree Farm in Harmony.

WHY: “We both became more conscious of what we ate, and I realized I could heal my body by eating the right foods,” Rachael says. She says that after she changed her diet, she no longer experienced the effects of depression or insomnia and her skin became clearer than ever. “Two years ago, I never would have imagined being so healthy,” she adds.

HOW: So how does a baker create sweet treats without refined white sugar and flour? Rachael uses sweeteners already found in nature, like raw honey, maple syrup and rapadura, made from dehydrated cane sugar juice. Instead of flour, she grinds up raw almonds into a fine powder and blends those ingredients with coconut oil or pastured butter. The result is a batch of nutty, sometimes savory cookies that can be more satisfying than those made with sugar and flour. rachaelbakes.com -J.C.

Click here for a recipe for making lacto-fermented carrots.