We interviewed the chef about his Rhode Island roots and TV appearances and got some advice from him for aspiring chefs. 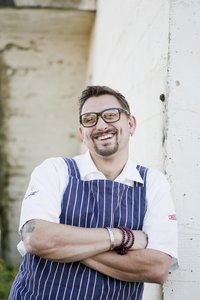 Chef Chris Cosentino, born and raised in Rhode Island and 1992 graduate of Johnson and Wales University, battled some of the top chefs in the country to win the Bravo reality cooking series “Top Chef Masters.” He is chef/partner at Incanto restaurant in San Francisco, where he specializes in cooking offal, tasty bits of animals that are commonly discarded. He owns a salumeria there called Boccalone, and recently released his first cookbook, Beginnings: My Way to Start a Meal. We interviewed the chef about his Rhode Island roots and TV appearances and got some advice from him for aspiring chefs.

What are some ways that your family and Rhode Island upbringing inspire the way you cook today? My mother’s family founded Newport, Rhode Island. We are the Eastons. When I grew up, there was always talk of Easton’s Newport Breakfast Sausage, which is no longer in existence, but they were among the first people to ship ground sausage up and down the eastern seaboard. New England has a deep-rooted English history in its foods and a lot of that is part of what I do all the time.

Did you resurrect your family sausage recipes at your salumi shop? The original was called Easton’s Newport Breakfast Sausage. I found the original recipe. Now we have Easton’s Breakfast Sausage and we sell that at Boccalone. The company went out of business in World War II due to lack of quality in spices. I always said when I was a kid and I started cooking that I’m going to bring it back. My grandfather grew up working in the sausage plant. He passed away when I was in high school. I think he would be pleased.

What was your experience like as a student at Johnson and Wales? I was accepted into Johnson and Wales conditionally. I was a really bad student in high school, so I had to have all my test scores approved. Johnson and Wales was a great foundation for me. It really opened my eyes. I did two years of culinary school and then I did the teaching assistant and fellowship program, so that I would be working for the university in what used to be J. Wales, which is now Legal Sea Foods.

What’s the best piece of advice for young chefs who want to be successful like you? Don’t try to be successful like me. I think the problem right now is that too many people have aspirations to be on television. If people want to be successful in the food industry, they need to learn how to cook. They have to shut up and learn how to cook, and listen, pay attention. For me, being on television was a fluke. It’s not reality. It’s not what I set out to do. All I ever wanted to do was have a restaurant that all the chefs wanted to eat at. That was my goal, and it turned into more. You’re only as good as your last meal. It doesn’t matter if you’re on TV or not, and if you really stay true to your craft and respect your craft, then you’ll succeed. If you try to emulate or be somebody else, or be a television star before you can cook, you really are lost.

Why did you choose the Michael J. Fox Foundation as your charity? [Chris earned a total of $141,000 through challenges on the show, and his total winning amount was doubled to $282,000, thanks to the Foundation's $50-million Brin Wojcicki Challenge.] My uncle John had Parkinson’s and lived with it for thirty years. My really good friend’s mother has Parkinson’s and one of my great mentors has Parkinson’s as well.

How can people learn to appreciate your type of cooking? I know that you guys have Matt Jennings of Farmstead and La Laiterie. My recommendation is if people are afraid of these cuts they should go to his restaurant. They should taste these cuts and not be afraid of them. It’s an evolutionary process for a lot of people. They’re not used to the strength of the flavor or the texture. My goal has always been to become familiar with the unfamiliar.

Why have you chosen to be on television in addition to being a chef? I used to watch Japanese “Iron Chef” before it was even subtitled and all in Japanese. I was a very competitive athlete for many years, and I felt that for me, it was a great opportunity to cook in a competitive environment. But also, I looked up to Japanese “Iron Chef.” I thought it was the coolest thing in the world, so that’s how TV started for me. I was cooking on television. I wasn’t doing anything other than cooking. I had a stint on TV where I was doing some things, and I changed the direction of what I was doing, and now I had that opportunity to cook on “Top Chef Masters,” which was for me, to solely focus on a charity. I’ve done that, and right now I’m just taking it one day at a time.

Tell us about your new cookbook. The book was released in May and it’s focused on first courses and it’s seasonal. It starts with spring because that’s when the book launched. When people go out to eat, they say how much they love the starters/the apps and first courses. I wanted a book that focused solely on those, and it’s about 85 percent vegetables, so it’s really simple and approachable.

How can people experiment with whole animals and offal at home? That’s a very difficult thing for people to do at home. Are you going to buy a 250-pound pig for your household? If you buy a whole animal, that’s a huge undertaking, so if you’re talking about somebody’s home, you should work with the rancher or with the farmer to see what type of off-cuts they have that you can start to learn to work with. It’s fine to buy a whole animal for a family of four, but that’s a pretty big undertaking. If you want to share with a couple of households and divide up the meat, that makes a lot more sense. Learning to cook off-cuts of meat is doable at home, but it’s a very time-consuming process.

What made you decide to serve beef heart as your final dish on “Top Chef Masters”?  They asked me a question and I gave them an answer. Every dish that I served at the finale was something I’ve been serving at my restaurant for nine years. There’s no reason why I wouldn’t serve those cuts of meat. And I feel that in this day and age, if a food critic can’t stomach the concept of eating these cuts of meat, then I really question their validity as a food critic. It’s okay if you don’t like them, that’s fine. If I was to do something different from what I do, I think that would have been a disservice, not only to the diners in the challenge, but also a disservice to my restaurant, to the patrons at my restaurant, and myself, because that wouldn’t have been truthful.