Q-and-A: The Nether with the Gamm’s Judith Swift

The disturbing play reflects on emergent technology, the darker natures of humanity and what could happen in a world without consequence.

The Nether, showing at the Sandra Feinstein Gamm Theatre March 2−26, is a dark and disturbing play about emergent technology, the darker natures of humanity, and what could happen in a world without consequence. I had the chance to speak with the Gamm’s resident director Judith Swift to get a better understanding of The Nether. Our chat became a discussion of the future and how to deal with that which frightens or disturbs us.

Orrin: So, let’s just start basic. Tell me everything about the Nether? 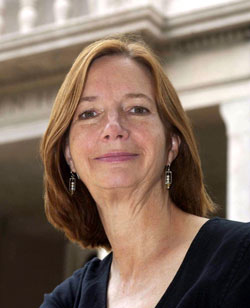 Judith: Ok, well, I think the thing about the Nether that’s so interesting is the idea that we are coming to a point soon in which the world of machines and the world of biology will merge. There is a guy named Ray Kurzweil, who wrote the book The Singularity. He’s a futurist, and his idea is that eventually through neuroscience we will have decoded the brain to the degree that we understand everything about it and we can recreate it as a machine. To that you add the playwright Jennifer Haley who says, let’s just imagine a world in which virtual reality allows us to create an environment without consequence. We can create a world where it’s possible for us to live out any fantasies we want. That is what the Nether is in the play. It is a virtual reality where anything can happen, and there are no consequences.

Orrin: What do you mean? What does that look like?

Judith: It can look like anything imaginable. You can have people living with fantasies worthy of Mother Teresa, one of millions of healed lepers, or it could be a fantasy worthy of Jeffrey Dahmer and mass cannibalization, but neither would have consequence. When you say it is conceivably possible for a machine to be imbued with the characteristics of the human mind then –– on its very own –– it can or will develop the capacity to evolve independent of human intention. You have the potential for that mind to go in a direction that we neither conceived of nor approved of.

Orrin: I see. So how does this work in the play?

Judith: All of those factors bubble up in the corners of this play. What Haley very intelligently does is to choose one of the great taboos of pedophilia as a way to get to the issue of what happens if there is a virtual reality in which there are no consequences. It starts with a man who is a businessman on one hand and a pedophile on the other. He chooses to leave the world behind and spend most of his time in the Nether where he creates a space that caters to those desires but without hurting children. At that point, a police officer gets wind of this organization providing pedophiles a virtual experience and decides to investigate. In the world of the play, the Nether is  the Wild West, lawless and untamed, and the police officer believes it is time to bring laws and real world consequences to the Nether. However, as her investigation goes deeper, she discovers the draw of the Nether and how having emotional needs that are missing in the real world fulfilled in this virtual world can be therapeutic.

Orrin: So this police officer represents the kneejerk reaction of people to the rapid pace of change. Why is that an important theme for today’s world?

Judith: There is this idea from Thomas Friedman’s new book that technology and the global economy are all moving so fast that it causes people to go to a very fight or flight place, like someone is knocking at your door and it’s putting you into a state of total panic. Frankly, a lot of what Friedman talks about speaks very nicely with things like Brexit, the Trump election and, of course, climate change. With climate change, there are these major systemic and environmental changes that are happening globally which we can be oblivious to. We are starting to see warning signs, but we’re not seeing the big picture, and there is always the question of whether we are even capable of seeing the big picture. His idea is neither fight nor flight, but acceptance. The world is changing and it’s going to continue to change and people should sit back and consider it rather than react to it.

Orrin: Is there anything you’d want the audience to keep in mind before coming to see the Nether?

Judith: There are people who feel very strongly about the world of the Smartphone and how things are changing; how millennials are dealing with communication.  I’m a baby boomer, the way we deal with technology and privacy is a very different thing.  You want people to keep in mind their thoughts that they have about emerging technology. I want them to be open and to allow themselves space to experience and think because this play is extremely disturbing. There are times where I find myself feeling enormous sympathy for this pedophile. I also find myself utterly repulsed by him. I’m not going to say “Don’t walk in judgmental” because we are always judging. It’s our judgmentalness that keeps us going. And this play takes you on a ride. It takes you on a moral ride and it takes you on an emotional ride.

Orrin: This is an incredibly dark play. How did you first hear about it?

Judith: I had heard of the play. I had read about it. I was not looking at it as something I wanted to do necessarily, but then Tony Estrella and the rest of the people who work on developing the season asked if I wanted to direct it and I said, “Oh, yes.” I am very fortunate in that when they have something twisted and disturbed, I get dibs on that.

Orrin: Why is that?

Judith: I love the twisted.

Orrin: Why is that?

Judith:  Why do I love the twisted? The answer is that it’s not because I’m living some surrogate existence through these thoughts. It’s that what helps me to sleep at night is allowing myself to think through all of the vile possibilities of the world and to realize that the reality of what I’m experiencing is gloriously good.

Orrin: Well. That’s a beautiful way to tackle these things. Thank you very much for talking with me. I look forward to seeing it.