View landscape and black and white photography, plus one photo that took ten years to capture.

On Wed., April 13 from 6−8 p.m., New England-based fine art photographer Jeremy Barnard will show a collection of select pieces from his career spanning more than forty years. An event involving wine, art and conversation will take place at Candita Clayton Gallery at Hope Artiste Village (999 Main St., Unit 105) in Pawtucket, but the exhibit will be open through May 7, 2016. The show is being produced in collaboration with Ting Barnard's Studio. Jeremy Barnard is also the father of Providence-based photographer Ian Travis Barnard, and in the interview below, he explains his inspiration and the differences between he and his son’s individual talents.

When did you first become interested in photography and why is it such a huge part of your life?

I was lost in my educational career. I was without direction because I couldn’t figure out what I was interested in or wanted to do. That persisted throughout my freshman year in college. My sister had married a filmmaker and he was involved with Woodstock, the film about the music festival. I would hang out with them, and one time, they handed the camera to me and I played around with it. When we looked at the result of what I had done, [my brother-in-law] said, “I think you have an instinct for this.” After my freshman year at Bucknell University in Pennsylvania, I left, because I was without direction, and I didn’t feel as though I should be spending my father’s money for no reason. I went into the Merchant Marines for a year and then when I came out, I decided I liked film enough that I would pursue it. I enrolled in college again at Emerson in Boston. I was going to be a filmmaker. After I submitted the first film I made for class, the professor called me into his office. He said, “It’s probably the worst thing I’ve ever seen. However, the good news is, I think you are a natural still photographer. Your film is a collection of stills that you strung together in a very disjointed way, but you appear to have an instinct for composition and light.” He suggested I go to the Boston Public Library, pull out a few photography books and go to the nearest pawn shop and get a 35mm camera and start playing around. I had enough respect for this gentleman that I immediately did that. I shot a roll of film and developed it and I was immediately hooked. And that’s how it all started. To date, I have only taken one week of formal photographic training.

So you are self-trained?

I am totally self-trained. I’ve read everything that Ansel Adams ever wrote multiple times, and I continue to study the technical aspects of photography.

When photography went digital, how did you take the transition?

Initially, it was a difficult transition for me. I loved the world of silver photography and I thought there were forces at work that were going to destroy it for me. Fortunately, that did not happen. I find that there are more similarities than there are differences. In fact, my tool box has become bigger with more tools in the digital world.

Are there pieces in the show that you’re most proud of?

The show includes twenty-one of my favorite pieces. It spans my forty-plus years in photography. There are a couple pieces from the early ‘70s and there are representative pieces of the new work I’ve been doing since 2006, which is the infrared work. The infrared that I do isn’t startlingly surreal. Upon initial viewing, they look almost as if they are black and whites. But then you begin to notice some of the tonalities are reversed. A lot of people tend to think they are negative images or that they are solarized. I love the infrared. It has become my passion. I feel as though I have found my true voice. 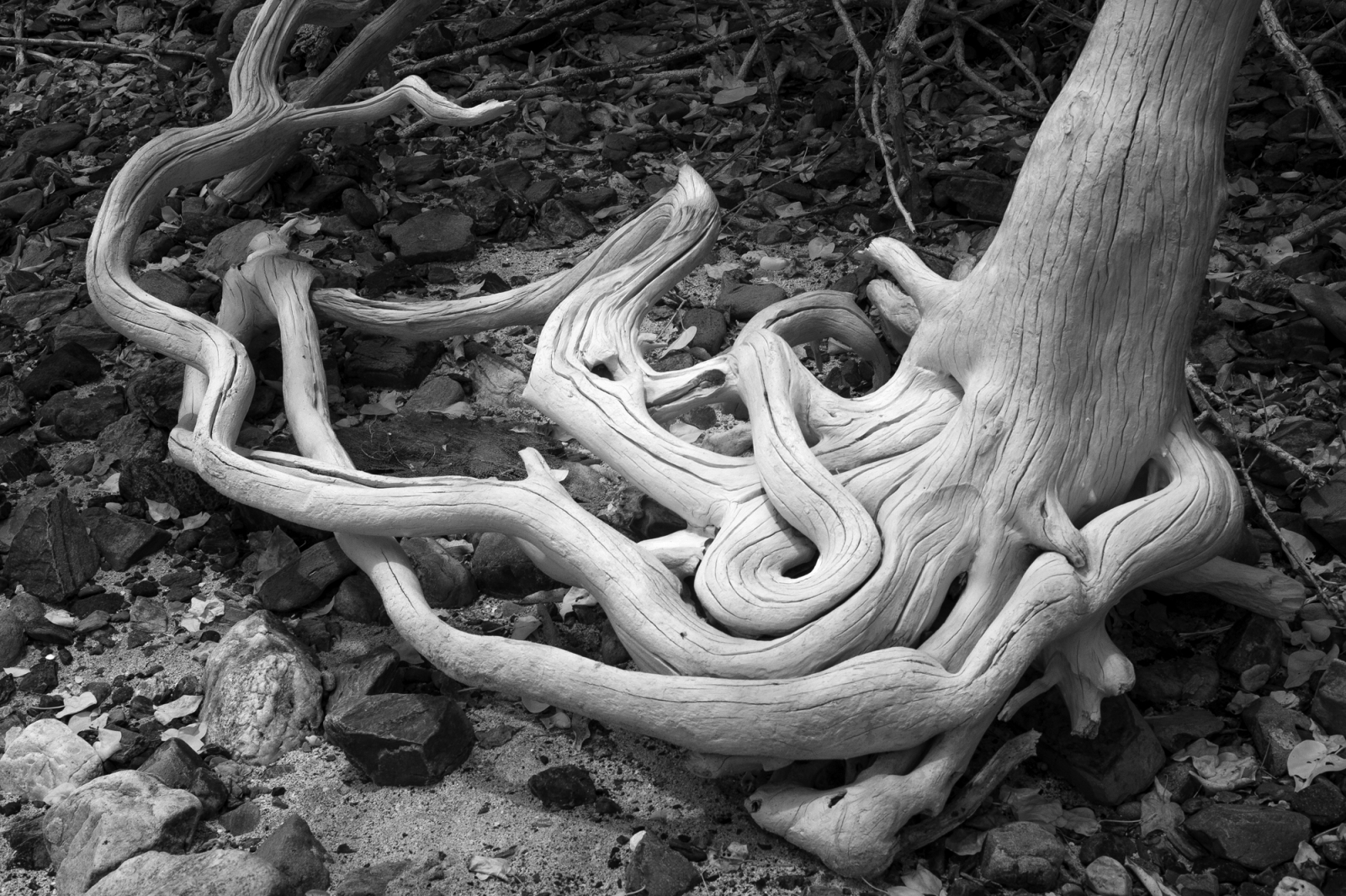 Can you explain infrared?

People think of infrared goggles that are used by the armed forces for night vision. Our portion of the light spectrum that we can perceive is between 700 and 900 nanometers; just above that – from 900 to 1,200 nanometers – is the area of the light spectrum called near-infrared. What the army uses for night vision is heat infrared. We cannot with our eyes see near-infrared but there are species of animals, specifically insects, that can. Bees see infrared and some predatory birds can see infrared, including owls. I am particularly interested in the fact that bees see it. I titled my infrared collection, “Through the Eyes of Bees.” What makes it interesting is that chlorophyll in plants is able to reflect infrared radiation almost 100 percent. Because leaves and organic things like plants and grasses reflect the radiation at almost 100 percent, they appear white.  A lot of the landscapes – people say to me, “Was this an ice storm?”  “Was this freshly fallen snow?” The photos end up looking a bit surreal. 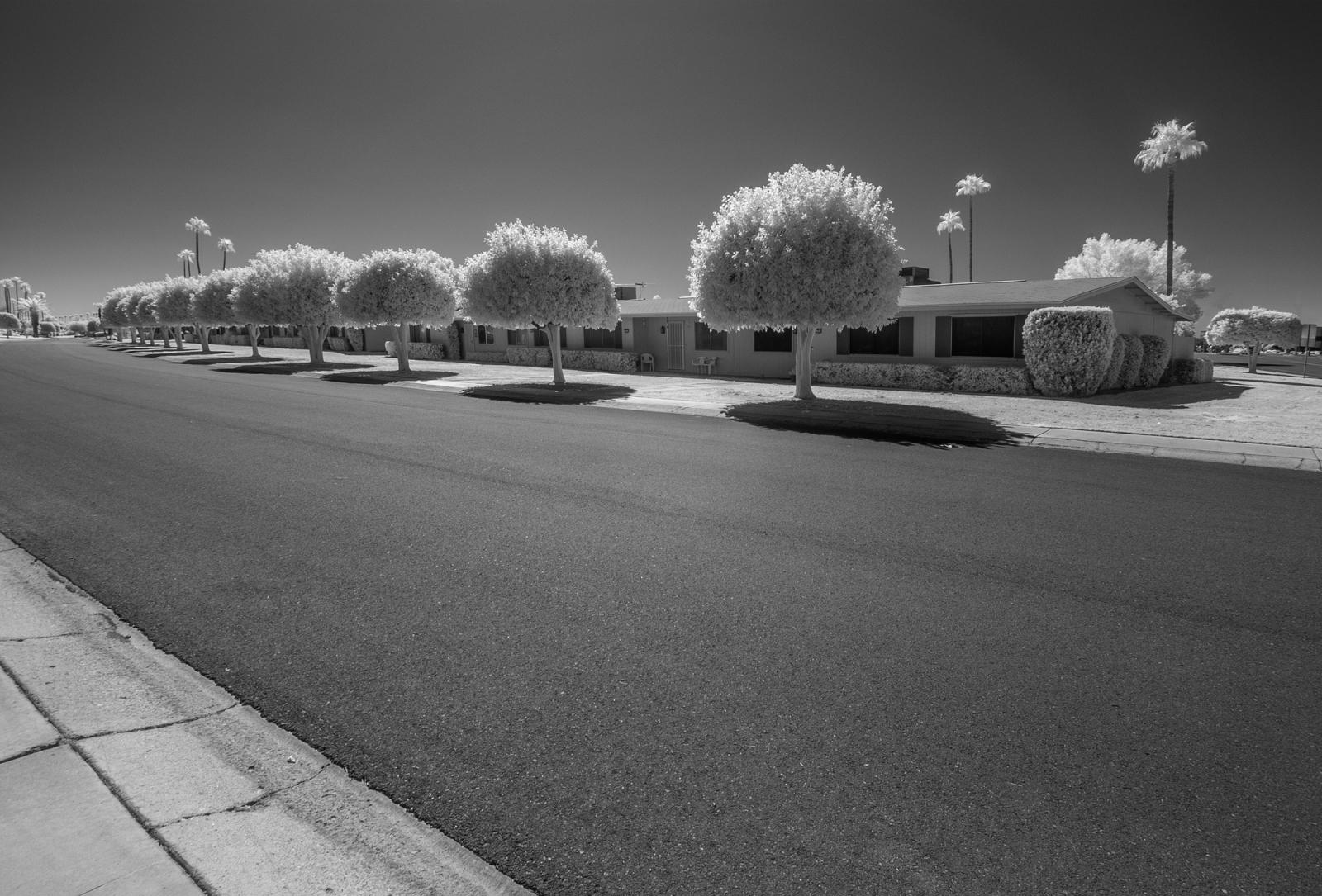 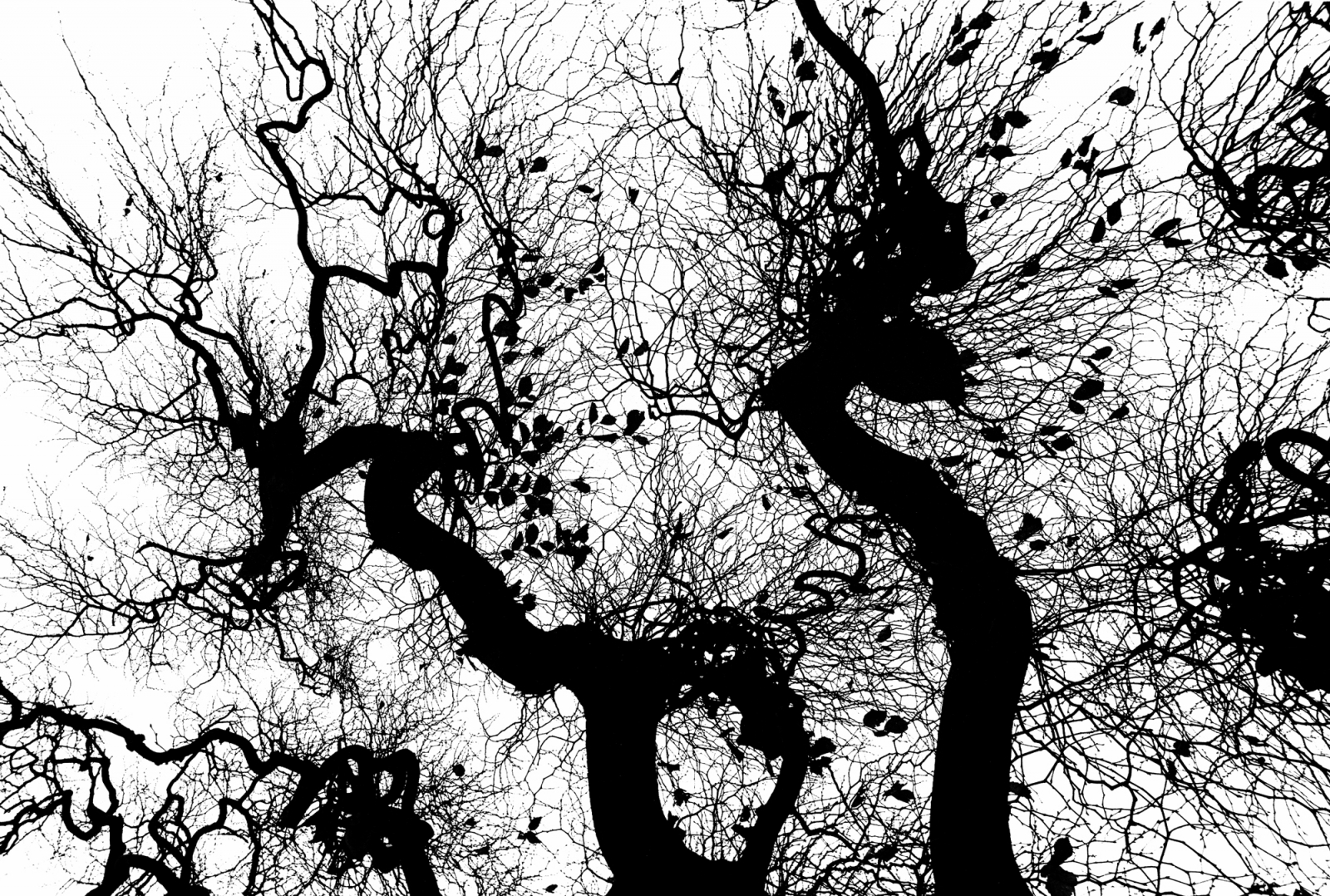 Do you have favorite places to shoot?

Anywhere there are rocks and trees, I am a happy guy. I often say my life is all about rocks and trees. I found this trend early on where I only shot people. I was indulging in some sort of a social statement. It was all people and then all of a sudden in the early ‘80s, I stopped shooting people completely and started shooting abandoned places. There was some subconscious thing that happened psychologically in me. I became somewhat cynical. I’m an old hippie out of the ‘60s. I really believed that our movement was going to change things; that we were going to make the planet a better place. I stopped shooting people and started shooting abandoned places. My work was described as detached and maybe depressed, because I spent a good deal of time going from one abandoned house to another. The images are interesting, but very haunting. There is the implication that someone had once been there, but now there are no people. Then later on, I went to the infrared. My cynicism evolved into a desire to create my own reality. The infrared is my way of creating a beautiful alternate reality. I like to create images that ask more questions than they answer. 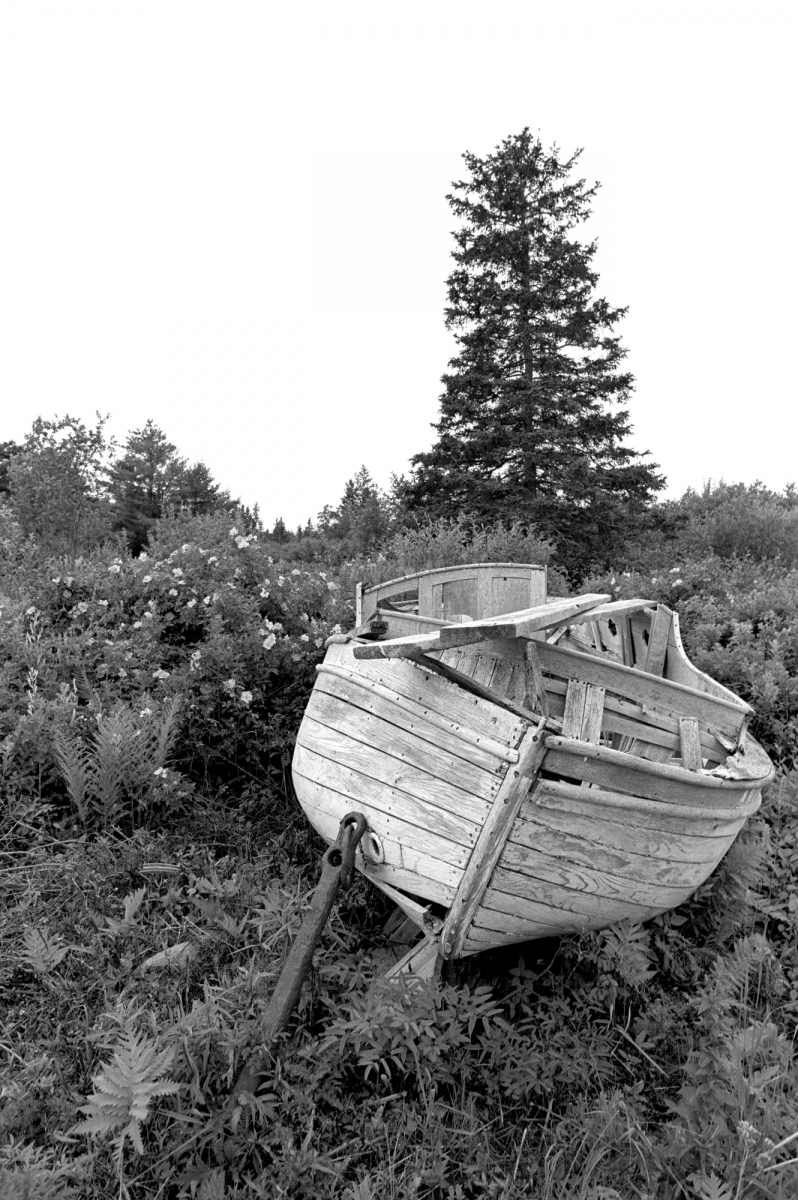 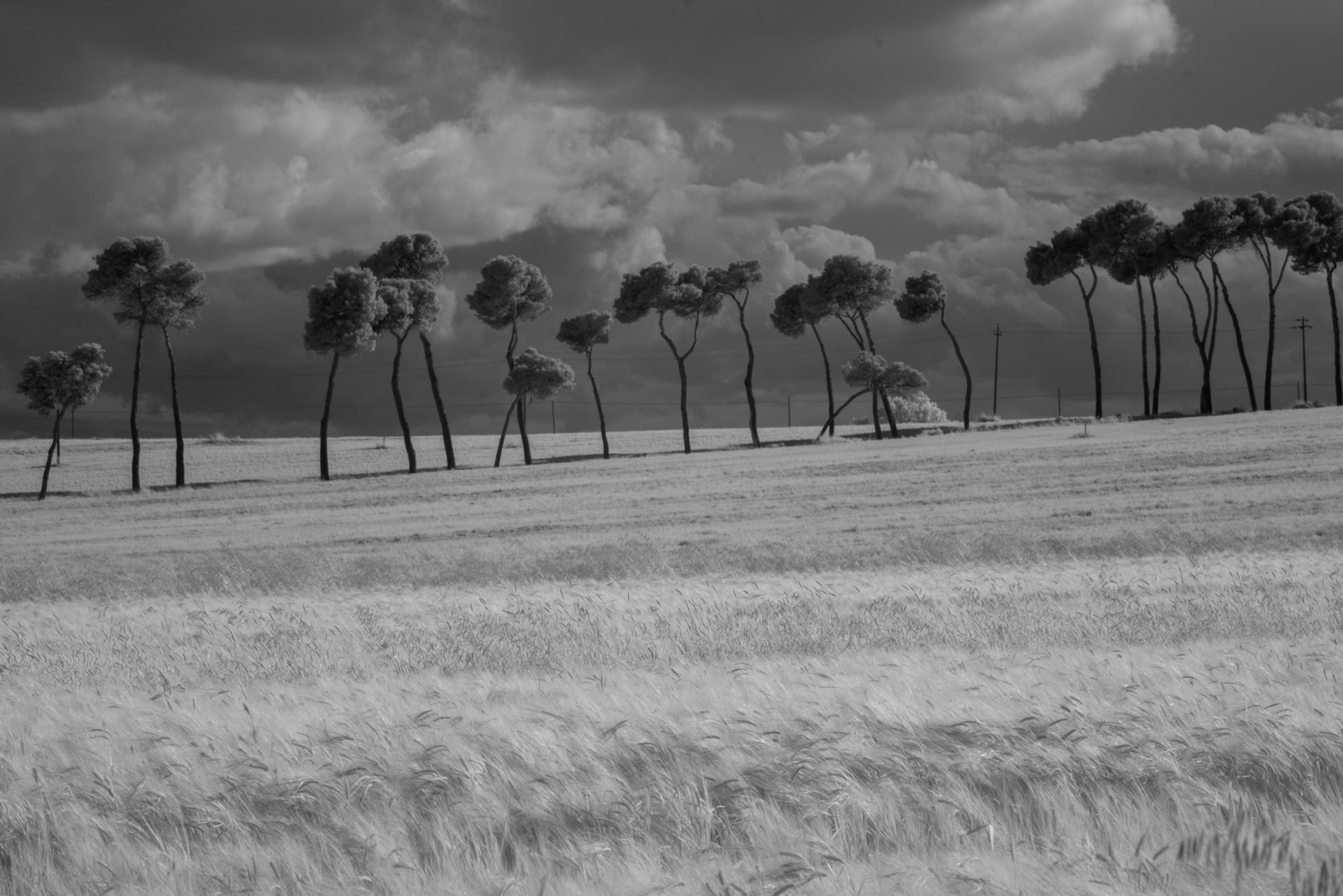 With your son, Ian, getting into photography, I am sure you played a big role in that. What do you think about how far he has come with his business?

It’s so cliche in a way, but I really think Ian’s my best friend. I admire him and respect him. I made a move many years ago when he was still at B.U. to give him a connection and he has parlayed that into a life for himself. Our photography is very different. He said recently, how wonderful it is that we are both involved in photography from different angles. He said to me, I think the difference in our styles is that I create an image and you capture an image. He has a vision and he creates it. He said to me, “I just wouldn’t have the patience to spend the time that you spend with a subject analyzing and figuring out what you want to do with it.” He said, “It’s much easier for me to create it.” There’s one image in the show that took me ten years to get right. I knew exactly what kind of conditions I wanted, but I had to rely on Mother Nature to give them to me. It’s called “Butch Tree.” It’s an apple tree. It was crucial that I had this ground fog that would sort of fog out the trees in the background so the apple tree would stand out. I would go back again and again to the location, and finally, after ten years, I awoke one morning, and rolled over and looked at my wife, and I said, “This is the day.” There was early morning fog and it was perfect. Ian says, “Oh dad, I just wouldn’t have the patience.” jeremybarnard.com; iantravisbarnard.com