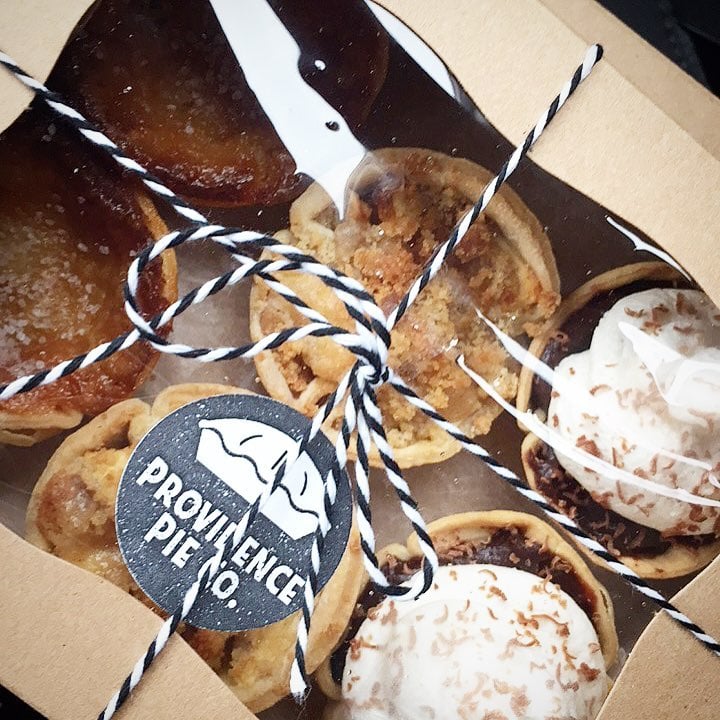 Tom and Sandra Morgan basically started a business and had a baby at the same time. The owners of Providence Pie Co. welcomed a baby girl on April 13 of this year, and then launched their business on Mother’s Day. They even have a playful nickname for their daughter as a result.

Tom has a background in making dough from scratch at a pizza place, and he began crafting pies for his wife. “I said, ‘Let’s not have an entire pie. Just because I’m pregnant doesn’t mean I should eat entire pies at a time, so he started making the mini versions,” says Sandra. “Everyone seemed to love them. You can take a few bites, they’re easy to share, and you can try different kinds.”

Tom makes all of the pies by hand at the Millrace Kitchen, NeighborWorks Blackstone River Valley’s incubator kitchen in Woonsocket, while Sandra assists in the baking and handles orders and management tasks. They gather local ingredients like apples, peaches and berries from Pippin Orchard in Cranston and honey from Providence Honey Company. Tom works a day job Monday through Friday, so the couple books kitchen time for off-hours, which are sometimes late at night or early mornings.

They don’t have a retail location yet, but that’s the end goal. “We want to have our own little shop. You walk in and get a little lunch with dessert,” says Sandra.

For now, pies are available at popup locations every weekend, which rotate between Borealis Coffee in East Providence; West Elm, Stock, Sydney, Providence Bagel, Coffee Exchange and Federal Hill Pizza in Providence, and Feast Sandwich Company in East Greenwich. On Oct. 1 the couple is working with Rogue Island in the Providence Arcade on an event called Fall Fest from 5 to 8 p.m. Guests will dig into a fall-flavored pie with a scoop of Rogue Island’s award winning ice cream. Tickets are $5 per person and include one mini pie and one scoop of ice cream. Additional pies will also be available to purchase to take home, and Rogue Island will be pouring fall beers and ciders.

So far, the jury is out on a most popular flavor. That’s because everyone orders them all. “When we do popups, we always bring three flavors, and everyone gets one of each, or two of each for a half dozen,” Sandra says.

The pies are $2.50 each, $14 for a half dozen and $26 for a full dozen. They also do full-size, nine-inch pies for $26, with a crumb topping or lattice crust. “It’s the same amount of ingredients, just a different format,” she says. A recent order came in for four dozen s’mores mini pies for a couple’s s’mores-themed dessert table at their wedding. “S’mores is killing it,” says Sandra.

The Morgans are gearing up for a busy fall, as they plan autumn flavors and get ready for Thanksgiving orders. So far, there’s pumpkin, pecan, chocolate cream, salted honey (using honey from Providence Honey Company) and caramel apple.

The pies are on the dessert menu at Twin Oaks in Cranston, and you can pick up pies every Sunday from 1 to 3 p.m. at Federal Hill Pizza in Providence and at a popup on Oct. 8 at Stock in Providence from noon to 3 p.m. Customers enjoy shopping for kitchen goods while picking up pies and meeting the small business owners face to face.

“We love meeting our customers. There are a few that come and we know their names and what they like,” Sandra says. “We’re so excited that it’s happening even faster than we thought. We’re on cloud nine right now.” pvdpie.com

Five Farmers Markets to Load Up on Healthy Goodies

Is the Doughnut Trend Here to Stay?