Sleek design and views of the state on a clear day set this property apart.

Flying High
Let’s be honest, the word “view” can be overused in real estate, loosely thrown about to describe even the smallest sliver of sea out a side window. But a select few properties have vistas so spectacular that they’ve genuinely earned the right to make it a selling point. The newly renovated penthouse in the Residences Tower in Providence is certainly one of them. Stretching thirty-two floors, it’s the tallest residential building in the state, and from the penthouse’s thirty-first-floor height, all of the city and much of Rhode Island beyond can be seen with ease on a clear day.

It’s no surprise, given the 180-degree panoramas, that the planning of the penthouse buildout focused as much on what was outside its windows as it did on what was behind them, according to architect Melissa Lawson, a principal at Pawtucket-based Lacuna Design, which led the year-long renovation of the 3,181-square-foot space.

“We really took into consideration all of the views, so that they were the first thing you see when you walk in,” Lawson says. 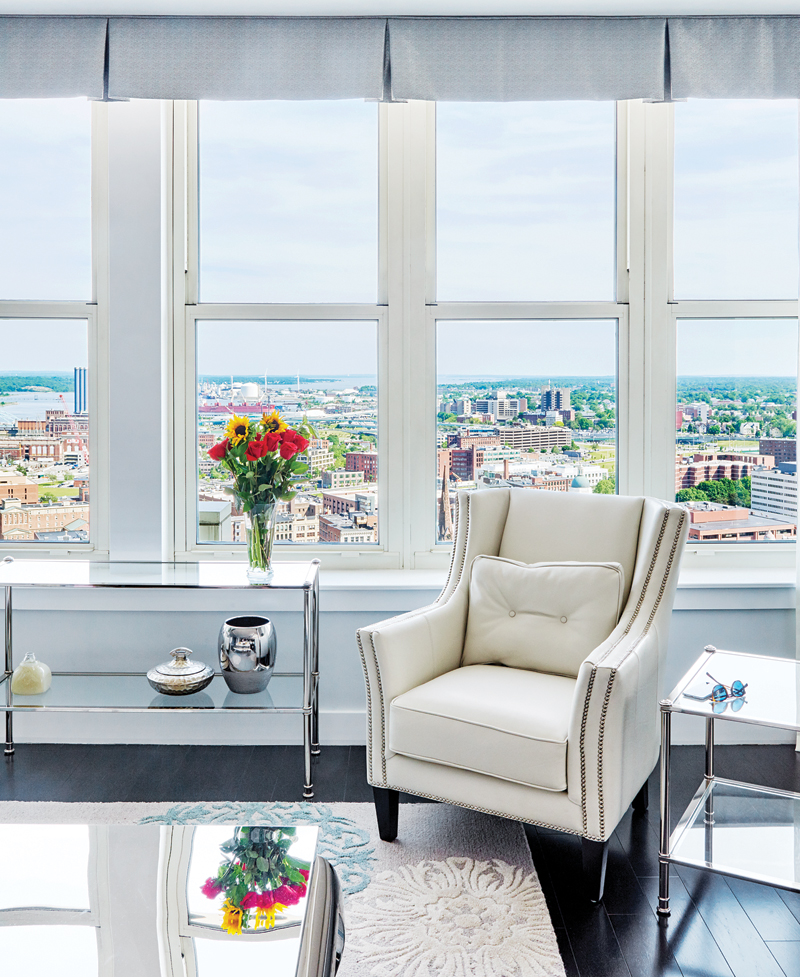 Free Flow
As much as staring out the windows all day might sound like an ideal way to pass the time, at some point eating does become a necessity. It’s a task made easier by the penthouse’s sleek and modern kitchen, which shares space in the main communal area with the large dining and living rooms. A massive island delineates the space, while also providing additional seating and coveted countertop real estate. The snow-white quartzite counters with infinity edges were selected with the aim of distracting from the views as little as possible and the custom cabinets, minimalist in style, were chosen for the same reason. 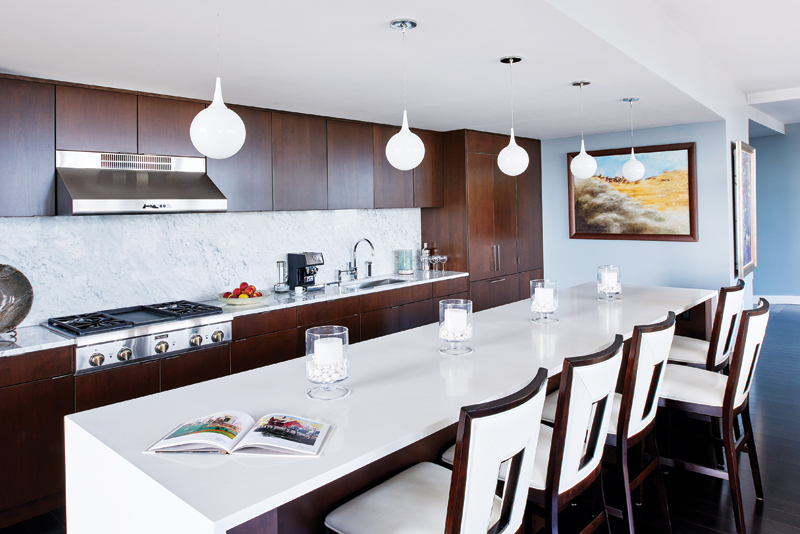 The open concept allows for cooking while still enjoying the views and socializing.

In the far corner of the room, a seating area meant for television watching and relaxation is offset from the rest of the space by a drop-down floor, a feature Lawson chose to distinguish the area without closing it off.

“With this layout, it’s even possible to have different styles of furniture right next to each other,” Lawson explains. 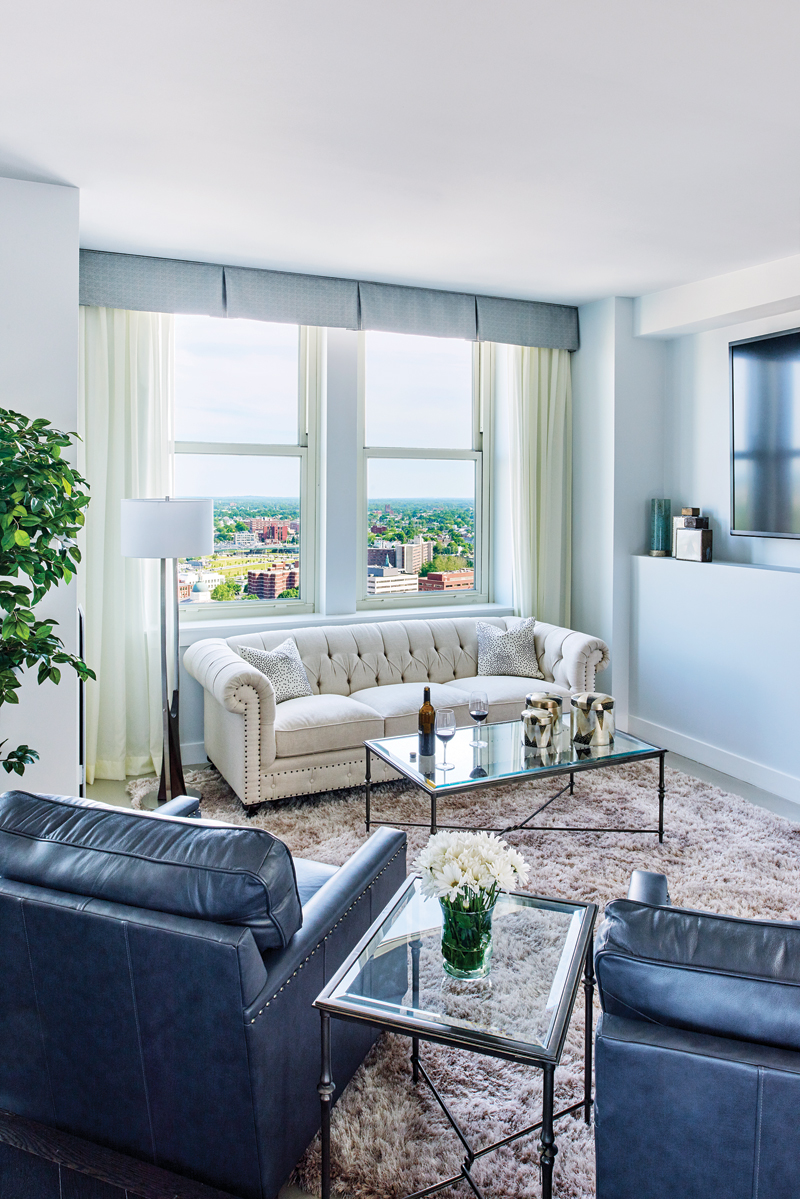 Room with a View
Though very much a blank space when design began, the project still came with its share of obstacles in the form of columns, and heating and lighting elements that had to be considered. 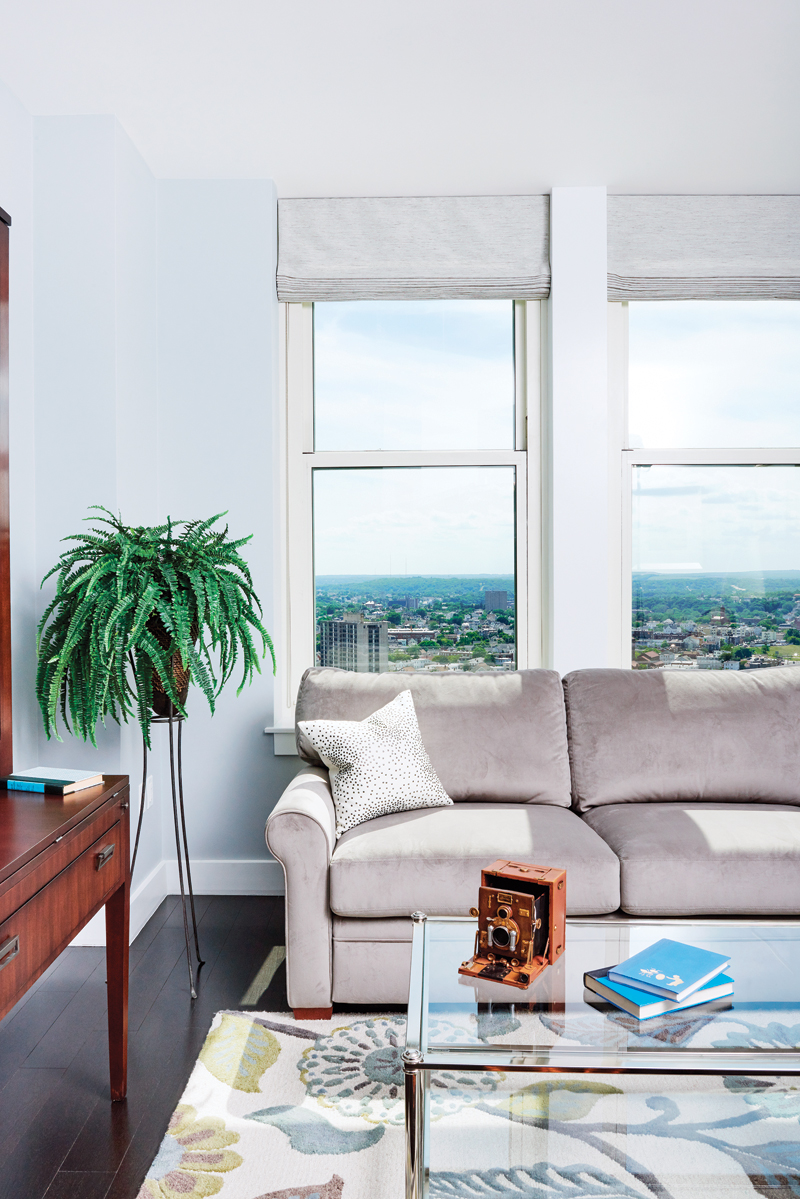 “Our plan was based on what had to stay and how we envisioned people to flow throughout the space. Those were the driving forces because we didn’t want it to feel like a small apartment, with lots of small spaces,” Lawson says.

The result is a C-shaped layout with a communal, open space in the middle, and bedrooms on each end.

Instead of fighting against the many angles created by those existing elements, Lawson and her team embraced them, working to ensure the proportions in some of the smaller rooms never felt restricting. They dropped the ceiling in several places to serve the dual purpose of not only accommodating lighting elements, but adding a unique architectural feature that brings character to the spaces. 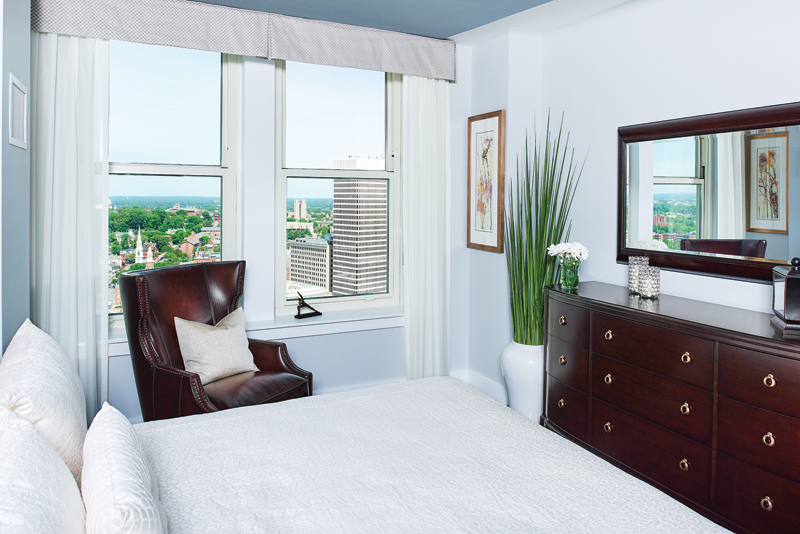 “We really had to get creative so that the space didn’t feel compartmentalized,” Lawson says.

Other features were selected just as purposefully. A rounded wall just off the kitchen not only mimics an existing column but also encourages a natural flow to the terrace and guest quarters beyond, which includes two bedrooms, as well as a walk-in closet and laundry room.

The guest bathroom, with its walk-in rain shower with body sprays, glass mosaic tiling and porcelain tile floors, was also outfitted with a transom window to let in natural light. The room’s frosted glass pocket door provides a similar benefit.

On the other side of the apartment, a closet-lined hallway leads to the master suite, where the ceiling slopes up subtly to maximize the view out to the private terrace. The bedroom’s east-facing windows perfectly frame a snapshot of the river and the city’s historic East Side.

Another transom window brings light from the terrace into the master bath, which is done in a minimalist aesthetic similar to the kitchen, complete with marble counters, a sleek wood vanity and a walk-in rain shower with a marble floor.

Private Show
Completed in 2007, the Residences Tower’s top sixteen floors are made up of residential apartments, while the bottom sixteen are hotel rooms used by the adjoining Omni Hotel. Not only does the building, owned and operated by the Procaccianti Group, ensure anonymity to its residents, it also provides some of the best services money can buy. 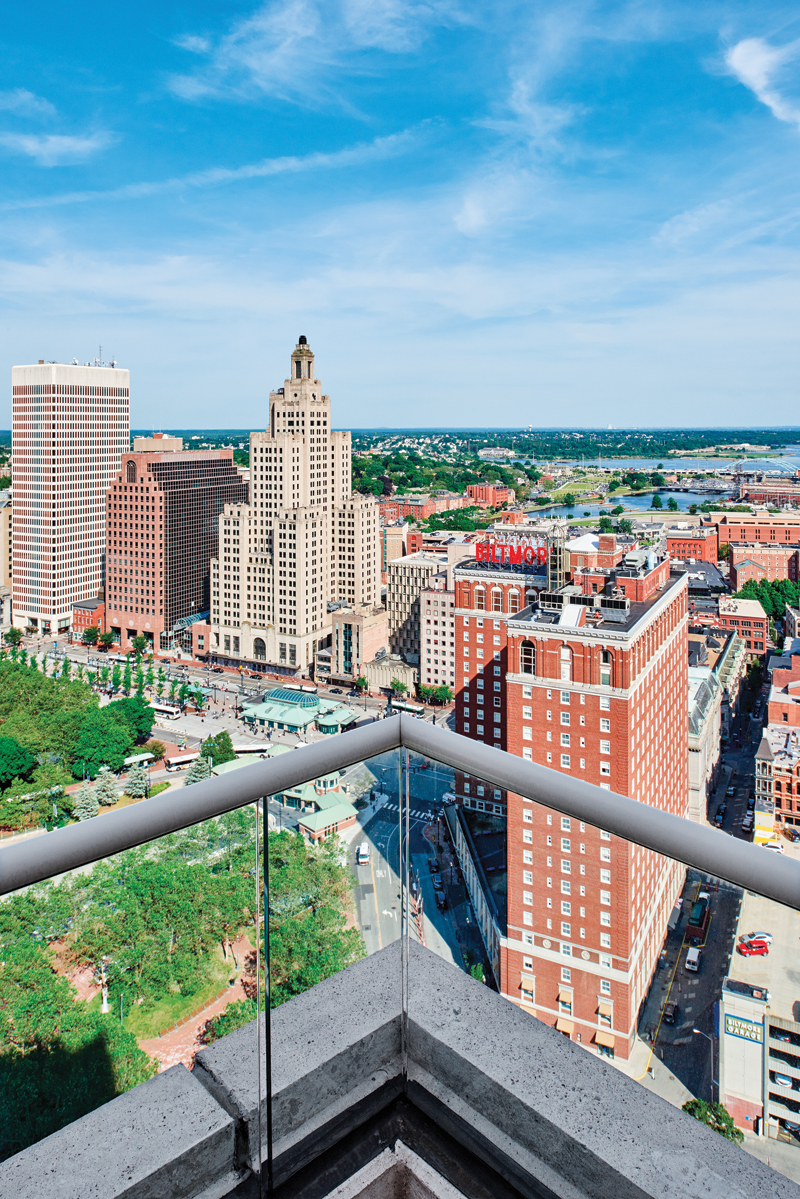 For several years, the penthouse remained unfinished, intended to be sold as such, until the decision was made to build it out “to show what the end product would look like,” says Michael Voccola, Procaccianti corporate vice president.

With its sleek design and priceless views, it’s hard to imagine this sky-high escape will be empty for long.