Our junior senator wants everyone to wake up. 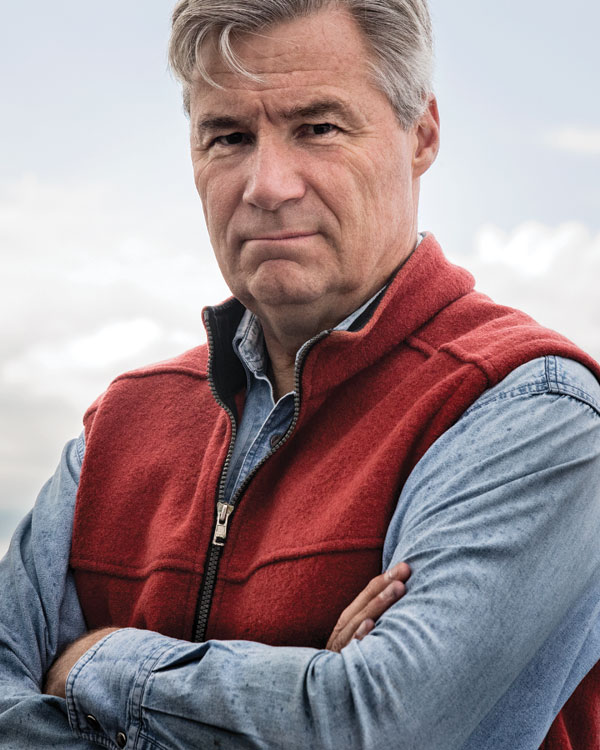 The more likely — and formidable — opponent for Whitehouse on the GOP side is retired Rhode Island Supreme Court Judge Robert Flanders, who had yet to
officially declare his candidacy at the time this article went to press, but has given various indications that he will.

Flanders is a blue-collar success story: he grew up in a Long Island family of seven children, the son of a salesman and a fast-food worker, and went on to graduate from Brown and Harvard Law and become a high profile defense lawyer. In addition to serving on the state’s highest court for eight years (he stepped down in 2004 to join the firm Hinckley, Allen and Snyder), he was appointed receiver for the city of Central Falls in 2011 after the city filed for bankruptcy protection. As Providence Journal political reporter Kathy Gregg has noted, when Governor Lincoln Chafee recommended Flanders for a spot on the First Circuit U.S. Court of Appeals in 2006, Whitehouse said at the time he was a “very capable guy.” (President George W. Bush wound up going with a different nominee.) If Flanders wins the Republican primary — he recently had more than $185,000 in his campaign coffers, to Nardolillo’s $23,774 — it would set up a must-see battle between legal and intellectual heavyweights.

Regardless of who ends up next to Whitehouse on the debate stage, it’s likely that a significant amount of time will be spent debating approaches to his signature issue: climate change. Nardolillo has called climate change a “back burner issue” and, in May, when Whitehouse shared a link to his 165th speech on the subject on Twitter, Nardolillo replied, “165 on climate change. Could you please show one of you fighting for Jobs? Economy? Public Safety? Veterans?”

When Flanders announced his exploratory committee, he released a statement that included a winking play on words — “In short, we need a climate change in Washington” — that suggested he’s ready to discuss the issue as well. Meanwhile, Rhode Island GOP Chairman Brandon Bell, while declining to pick a favorite between the two GOP contenders, wasn’t shy about blasting Whitehouse. “As much as he likes to brag about the number of speeches he’s given, I don’t think it’s accomplished much, except pumping more CO2 into the atmosphere,” he says.

Indeed, Whitehouse’s string of speeches has left him exposed to criticism from his own side of the political aisle.  In 2015, when plans were announced for a billion-dollar, gas-fueled power plant in the state’s rural northwest town of Burrillville, left-leaning groups in Rhode Island expected a full-throated opposition from their outspoken U.S. senator.  But such opposition — or statement of any kind — never came. And people have noticed. In July, the left-leaning political blog RI Future reported on a slightly tense scene in which local members of Indivisible, the anti-Trump organizing coalition, visited Whitehouse’s Providence office to offer praise and thanks for his defense of Obamacare, but stern questioning over his stance on the Burrillville plant. The post was titled “Sheldon Whitehouse Gets Cookies for Healthcare, Castigated for Burrillville.”

Discussing the same subject in a recent phone interview, Burrillville Land Trust President Paul Roselli noted how much he appreciates Whitehouse’s overall work on the environment, but expressed strong frustration with his conspicuous silence on this issue. He wondered aloud whether Whitehouse was afraid of alienating part of his base — the labor unions and construction — by opposing such a large infrastructure project. “At some point in any discussion…you have got to make your own change before you start telling the rest of the world how…to change,” Roselli says. “He’s had an opportunity since 2015 to say something, do something, just to weigh in on the matter, and he’s done absolutely nothing.”

Whitehouse, for his part, says that the Burrillville power plant presents conflict between two of his core beliefs: opposition to fossil fuel expansion and belief in the rule of law. And in this case, he had chosen to honor the latter. The Energy Facility Siting Board, which will ultimately decide whether or not to green light the power plant, is a rule-of-law commission, not a political commission, he says, and he wants to respect its sovereignty. Whitehouse says he understands the frustration about his stance, but, so far, he hasn’t budged. “Rule of law really matters to me, and it ought to matter more than ever with the Trump administration on the loose,” he says. “So I want to stand by the rule of law in this matter.”

Given the strength of Whitehouse’s position — the money, the support, the strength of his political brand — it’s unlikely criticism will be enough to topple him. But expect to hear a lot about it as the 2018 Election Day draws nearer. Bobby Nardolillo, for one, has found a newfound enthusiasm for the protection of a part of the state twenty-five miles northwest of the district he represents.

In the 228 years since George Washington was first sworn in, more than one in three presidents have been former U.S. senators. The sixteen-member list includes John Quincy Adams, Andrew Jackson, Harry Truman, John F. Kennedy and Barack Obama. The well worn path from the Senate chamber to the White House is the basis for the widely quoted wisecrack attributed to Senator-turned-President Lyndon Johnson: “Whenever most senators look in a mirror, they see a president.”

But in an interview with the website Business Insider in February, Whitehouse said he is “the exception to the rule that all senators see themselves in the Oval Office.” He has zero interest in running for the nation’s highest office, he says, and during his interview with this magazine six months later, he reiterated his lack of interest. That’s his final answer, he says.
Indeed, Whitehouse seems to have little desire for any job other than the one he holds. In 2012, when then-Vice President Joe Biden floated Whitehouse’s name as a potential nominee to the Supreme Court, Whitehouse quickly shot the idea down. Two years later, when he emerged as a potential replacement for outgoing U.S. Attorney General Eric Holder, again, Whitehouse quickly removed himself from the discussion. Jim Langevin says that shortly after Whitehouse was first sworn in as a senator in 2007, Senate Majority Leader Harry Reid told him “Jim…there’s not another member of the United States Senate who’s as excited as Sheldon Whitehouse to be in the Senate.”
So how long does he want to stay?

If re-elected, Whitehouse says he’s committed to serving at least one more term. His decision at that point — it would be 2024, and he would be sixty-eight — would depend in large part on the status of legislation addressing his two signature issues: climate change and money in politics.

The fact that Whitehouse is thinking about the legislative landscape years, even decades, ahead is not a coincidence. When asked about his political role models, he mentions the late Senator Claiborne Pell, who represented Rhode Island in the Senate from 1961 to 1997, and from whom Whitehouse learned a simple lesson: Think ahead.

Pell was almost scorned because he didn’t jump to the fore of the national debate or spend a lot of time on the Sunday TV-show circuit, Whitehouse says. “But while the other senators were fighting with each other to get attention in the debate of the moment, he was quietly building the National Endowment for the Arts, the National Endowment for the Humanities, Pell Grants and Amtrak,” he says. “He had a long view that looked beyond the immediate stuff, and that’s a lesson I try to remember.”

Whitehouse has made a few inroads when it comes to his own long-term legacy. He is proud of his role co-founding the Oceans Caucus with Alaska’s Republican Senator Lisa Murkowski, a group he believes will “keep ticking along and accomplishing things for a long time” after he’s done. He’s fond of the legislation he authored to create a National Oceans and Coastal Security fund, which he and his staff nicknamed “The National Endowment for the Oceans,” that was authorized by Congress in 2015, even though it has yet to receive funding. But his legislative Holy Grail, the passage of a carbon-free bill like the one titled “The American Opportunity Carbon Fee Act” that he introduced this summer, remains out
of reach.

Whitehouse says that the bill reflects a basic principle of market economics: The price of a product should reflect the cost of the harm it causes. In this case, companies that burn fossil fuels (coal, oil, natural gas) would be charged $49 for every ton of emissions they produce, a fee that will rise by 2 percent every year until emissions reach the target of 80 percent of circa-2005 emissions. The estimated $2.1 trillion in revenue generated by the tax in the first ten years would fund a cut in the top marginal corporate income tax from 35 percent to 29 percent; give veterans and Social Security beneficiaries an annual benefit starting at $550; give American workers an annual $550 refundable tax credit to offset their payroll taxes; and, as press materials from Whitehouse state, “Deliver at least $10 billion annually in grants to states to help low-income and rural households and workers transitioning to new industries.”
The bill is a quintessential Whitehouse piece of legislation: ambitious, climate change-focused, and potentially bipartisan. (Senator Lindsay Graham is the lone congressional Republican to support it, but Whitehouse touts the non-elected conservatives who have voiced their approval.) If passed, he says, “It would put [the U.S.] back as the city on the hill that other countries could look to for leadership and doing the right thing about a big international problem,” he says. At the same time, he says it would give Rhode Island a chance to avoid the doomsday-esque “archipelago” scenario he warns about.

Like much of his talk on climate change and, for that matter, U.S. politics in general, Whitehouse remarks about the bill are a mix of dire warnings and hopeful rhetoric. And this, according to one well-known colleague, reflects something central about his character. “That’s the thing about Sheldon,” Senator Elizabeth Warren said in a recent phone call. “He has…this slightly cherubic smile while he’s telling tales of death and destruction. When he really lines up on a subject, he punches hard. But he keeps right on smiling.”