If you’ve seen the Disney version of Peter Pan, then you know the story about the boy who never grew up began long before Wendy, John and Michael were born.

If you’ve seen the Disney version of Peter Pan, then you know the story about the boy who never grew up began long before Wendy, John and Michael were born. Peter and the Starcatcher, based on the novel by Dave Barry and Ridley Pearson, and written by Rick Elice, tells the tale of how Peter Pan got to Neverland and how he met Molly, the mother of those three special children. It’s a kids’ story adapted for adults, but it will keep the whole family entertained from beginning to end.

SPECIAL INFO: Tonight at 7 p.m. is Macy's Family Night, for which theatergoers who are age eighteen and younger will receive a free ticket of equal value with the purchase of a full-priced ticket for this same performance. Please call the box office at 401-421-2787 to order. Online ordering is not available for this option.

The five-time Tony Award winning play (not really a musical because there aren’t many song-and-dance numbers), opens with Molly (Megan Stern) and her dad Lord Aster (Nathan Hosner) who are taking separate trips across the ocean. Lord Aster is supposed to be traveling on the ship The Wasp with a trunk containing precious cargo belonging to the Queen, but at the last minute, a menacing man named Slank (Jimonn Cole) switches the trunk for one filled with sand. Molly boards Slank’s ship, The Neverland, with nana, also known as Mrs. Bumbrake (Benjamin Schrader). Nana is actually a man portraying a woman (but not trying very hard to be feminine, hilariously so).

While Mrs. Bumbrake is off canoodling with her lusty man hoping to shed his uniform, Molly explores the ship looking for pigs. Some of these scenes can be a little scary for young kids, but not more so than some of the darker Disney films. The cast uses nautical ropes to mime stairs and tunnels, and the crew members line up to become a hallway with doors that open into different scenes. Molly twists their arms to open the make-believe doors, and the men spring to life acting out various situations inside the rooms.

In one of these rooms, Molly meets three orphan boys who are being fed worms for dinner – presumably the pigs she was searching for. None of them have names, and they have never ever even heard a bedtime story, because they never slept in a bed. Molly tells them a bedtime story and then seizes the role as leader, directing the boys upstairs where they will be fed a much better dinner. “Mmm pork,” says one of the boys, a bonafide foodie.

One of these boys, who will later be named Peter Pan (Joey deBettencourt), ends up falling for Molly, and the two are cautiously becoming more than friends. But there’s trouble ahead when the decoy trunk is discovered onboard The Wasp. The crew turns the fast ship around and chases down the Neverland through fierce gales and towering waves. Again, the nautical ropes are used to portray violent seas. You’ve got to have a great imagination to appreciate the visual effects delivered from a simple set of props.

Finally the ships meet on the high seas and calamity ensues. Eventually a violent wave cracks the Neverland in two and survivors swim to the shore of the nearest far off island. Molly’s beau uses the trunk as a life raft and protects its contents. Soon we will find out just what is inside it. And what exactly is a starcatcher? This second act of the play answers a lot of questions and it is a much stronger production with a vivid set, mermaids in drag and jokes that are more successful in getting laughs. But I kept finding myself wanting more from Molly’s character. Stern is a terrific actress with her powerful voice and stage presence; I just wish we could hear her sing. 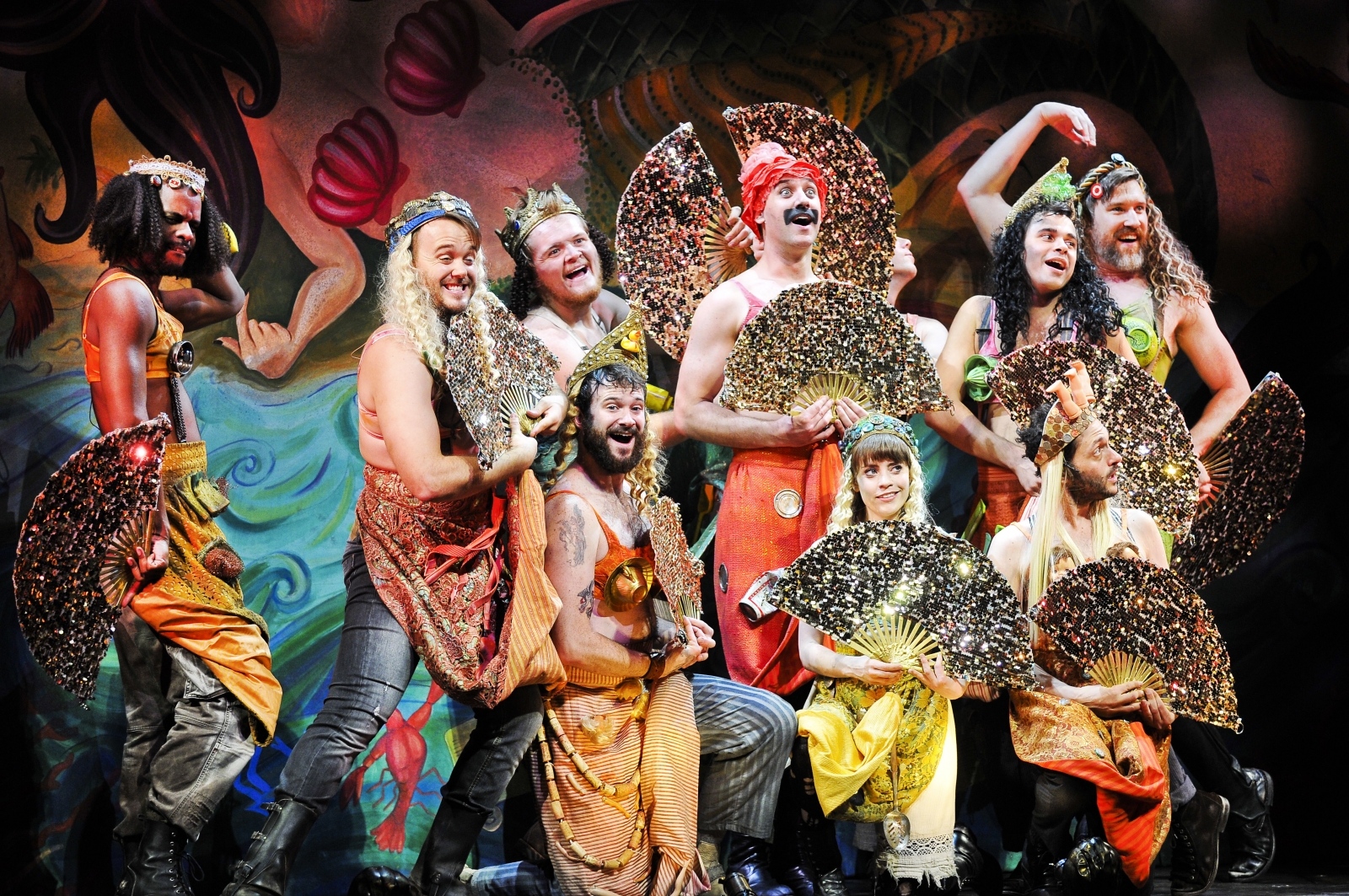 John Sanders is outstanding as Black Stache delivering the kind of gags that bring on belly laughs from the audience. The best scene ever shows how he earned the new nickname Captain Hook. All the hipsters in the audience will also approve of his handblebar facial hair. Not to mention the fashionable suspenders, britches and stylish haircuts sported by the Lost Boys. Did Brooklyn get lost in Neverland? Methinks so.

Peter and the Starcatcher plays through March 2. Tickets range from $32 to $69. Tonight at 7 p.m. is Macy's Family Night, for which theatergoers who are age eighteen and younger will receive a free ticket of equal value with the purchase of a full-priced ticket for this same performance. Please call the box office to order. Online ordering is not available for this option. Providence Performing Arts Center, 220 Weybosset St., Providence, 401-421-2787, ppacri.org.