After 9/11, Manhattan seemed a foreboding place for their son. So Carina Schott, who heads the Wakefield children’s boutique Nonchalant Mom (below, in her studio/shop), and husband, Karim Hamid, bought a car on eBay and headed for the hills. Off they zoomed to upstate New York and Vermont, then down Long Island and finally to Rhode Island where they discovered an ad for a South County residence with “lots of windows” — real estate parlance they hoped  implied sunny. Bingo! The cache of modest in-need-of-TLC buildings (main house, laundry shack and guest cottage plus an overgrown pool) was perfect. They forked over their hearts and savings. Schott brought her Scandinavian-hewed style and keen aesthetic to bear; Hamid his artist’s eye and DIY skills, and they reconciled it all with plenty of natural light, cool materials and an easy-breezy decor that their kids,  Sander, seven, and now Franny, three, find just right. 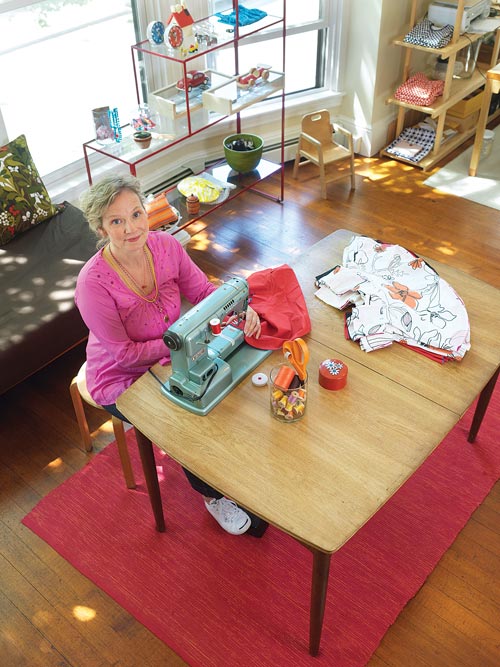 Open and Shut
As romantic as the story was (there’s talk honeymooners conceived the compound and a young I.M. Pei may even have played a role), the fix-up was daunting. The place had always been a summer getaway. Translation: no central heat, no storage and a quirky kitchen. The owners handled plenty of the work themselves. But with a second child expected, it was time to enlist help.

The goal was to forge more space but avoid a radical reinvention. Providence architect Donald Richardson, familiar with the house and area, understood. They were looking for a “modernist approach, one without pretension,” Richardson explains. His savvy eco-sound solution? A master wing to allot the parents private ground and a larger living/dining room. Taking advantage of the exposure, Richardson (along with New York and Rhode Island-based GN Woodwork) expanded the roof plane and bumped out a transparent wall three feet to the south. “That small distance,” says Schott, made “a world of difference.” Winter sun warms the cement floor, easing the job of the radiant-heat system below. Come summer, when the sun rides higher, the interior stays shady and comfortable. Custom high-venting windows and doors equal beautiful air circulation.

Furnishings are well-loved finds: a Ligne Roset  loveseat and ottoman, a George Nelson sconce and a Moroccan rug in the sitting area. A cache of travel mementoes, a painting by New York artist Mark Gagnon and Kit + Lili floor cushions from Nonchalant Mom inject color. At the hub’s opposite end, painted yellow Eames chairs corral the dining table. 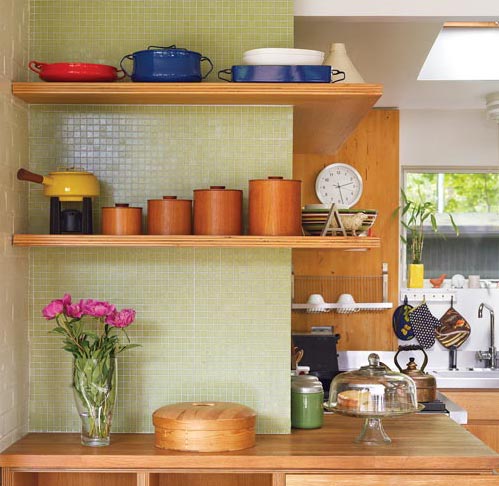 Cooking Light
Minimizing mealtime hassles, the cheery galley (left) is barely an arm’s reach away. Schott and Hamid tackled the snug space early on with the help of Wakefield’s Back Alley Woodworks. Today, a bounty of white oak cabinets conceals equipment and supplies. More frequently used items are allotted a home on the open shelves or parked in one of the cubbies. All around, a sea of glass tile, washed with light from multiple skylights above, shimmers. The tile’s serene green hue “pulls the outdoors in and offsets the warm wood,” Schott says. 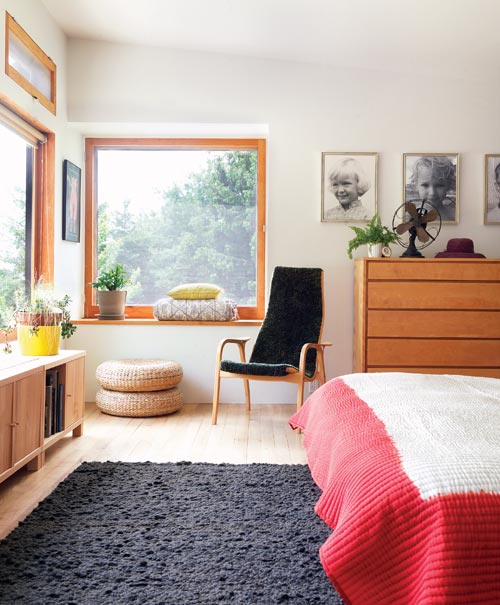 Sleeping Arrangements
Cocked at a ninety-degree angle to the core house, the master wing creates a Japanese-like terrace (note the boulder, right, in place since the glaciers slid through), promotes views and hides a near neighbor. On the inside, more sugar pine custom windows frame the great outdoors and usher in sunlight for the bedroom. Adhering to their refreshing Scandinavian meets Shaker decorating philosophy, Schott and Hamid need nothing more than a two-tone coverlet from Erica Tanov in New York, a straightforward Swedish chair with lambskin seat and a Russel Wright vintage dresser. The woven floor cushions are from IKEA, a hand-printed yellow pillow is from Hable Construction (through Nonchalant Mom) and the nubby, feels-good rug hails from Crate and Barrel. 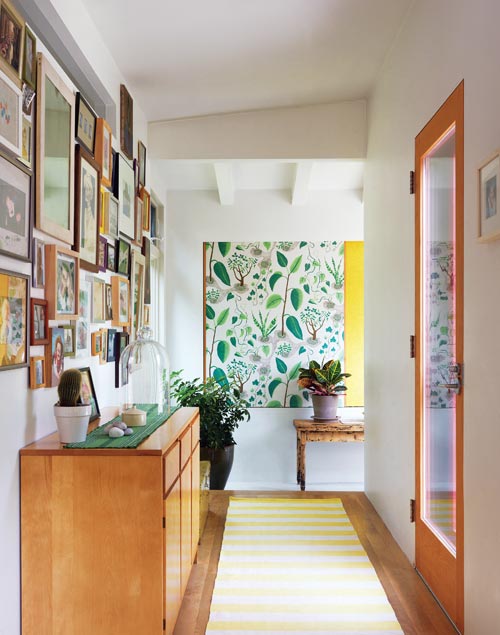 Hall Monitor
In the same wing, the small passageway connecting bedrooms serves as a gallery. A lively montage of personal photos and art hangs above a Russel Wright credenza. Schott’s Scandinavian aunt wove the green runner on top. During the day, the shoji screen festooned with a garden-like Josef Frank fabric moves aside to flood the children’s quarters with additional light.

Outdoor Pursuits
Stripped of encroaching trees, yesterday’s pool has been returned to its original blue glory. The ipe decks (here and off the living room) are evidence of Hamid’s woodworking abilities. Expanding living space tenfold, the decks afford ample room for kids at play and grown-ups. The square benches, also Hamid’s doing, double as seats or  tables beneath all-weather canopies hoisted as needed.

An oversize letter denotes the studio. Formerly a laundry shack, the tiny building was the first to be overhauled so that Hamid could complete portrait commissions on schedule. Listening to their inner voices, the inventive couple veered away from the usual New England palette and painted all three structures Sherwin-Williams’ “Stealth Jet.” The sultry color, buoyed with red doors, suits the landscape. 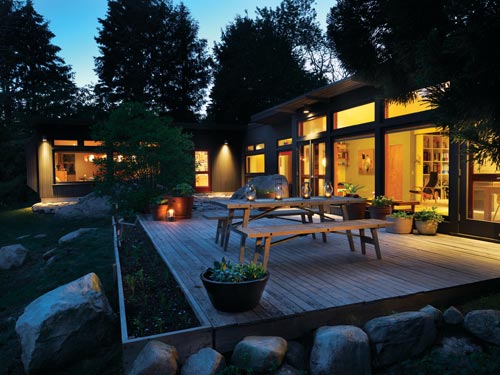 Evening Ware
The sixty-year-old house glows lantern-like at night. The sugar pine doors are thrown open and the silvery decks become stages for ambience-rich al fresco celebrations. “We bring out all sorts of things — tarps, rugs,  Moroccan pillows and great food,” says Schott. With a low-key table and benches from IKEA also in the mix everyone finds a perch. A long way  removed from the city’s clamor, the hosts and their frequent guests revel in catching sounds of the nearby ocean and watching the stars.