Sometimes the best companions in life surprise you.

Really, it all started with the monkey. When I was fifteen, a neighbor asked me to take care of her pets while she vacationed on a South Sea island. She had a cat, an enormous snake and a monkey. The cat and the snake didn’t need much from me, but the monkey was definitely high-maintenance. I had to shut myself in the room with him, and let him out of his cage so that he could whizz around, getting his exercise. To trick him back into his cage, I had to chuck a few grapes into it, which he would dive in after. One day, my aim was off, the grapes missed the cage by a mile, and I realized — after the monkey had scooped them off the floor — I was out of grapes.

At that moment, he leapt onto my head. I shrieked and scuttled over to the cage, bent over, my neighbor’s monkey practically suctioned on my head. Maybe he took pity on me — or my screeches irritated him — because on my third or fourth attempt to tip him off, he hopped into his cage.

As he and I stared at each other through the bars of his cage, a conviction planted itself in my mind: I would never keep animals in my house. Who wanted the responsibility? What did you get in return? True, back at my house we had a dog and two cats and I loved them (to varying degrees), but they mostly lived outside. Besides, my mother was the one who took care of them.

When I went out into the world on my own, I kept my vow; no animals ever entered my apartments.

Eventually, however, I met a guy and we married and had two kids. We moved to a house in Rhode Island, the first house we had ever owned, in a neighborhood where most people owned a pet.

“Where’s our pet?” my kids demanded indignantly, and relentlessly. My husband never uttered the question, but did often raise his eyebrows hopefully.

I could not withstand the onslaught of their pleading for long. As much as I felt sure I already had more than enough creatures to care for, and that animals did not belong in my house, the people who have come into my life have inevitably goaded, prodded and guilted me into changing.

First, our son got fish. Then he brought a quail home from school.

“Where did this quail come from?” I demanded.

“Oh, I don’t know. Around,” he answered vaguely.

From there, it was a short hop in time to bringing a puppy home — and then two gerbils.

Before we got the puppy, I insisted on researching dogs, as if I could methodically determine which breed would be least likely to drain my energy and mess with the house. Don’t get a Newfoundland, I read in one guide to dogs, unless you don’t mind seeing the fur it sheds stuck to your walls with its drool.

“No Newfoundland!” I announced.

You’ll need to let your puppy know that you’re the boss from the moment you bring him home, I read in another book, so be sure to walk through the door to the house before the dog. I pictured the dog and me shoving each other to get through the door first.

“I want the most submissive puppy you have,” I said to the breeder we ended up getting our dog from. 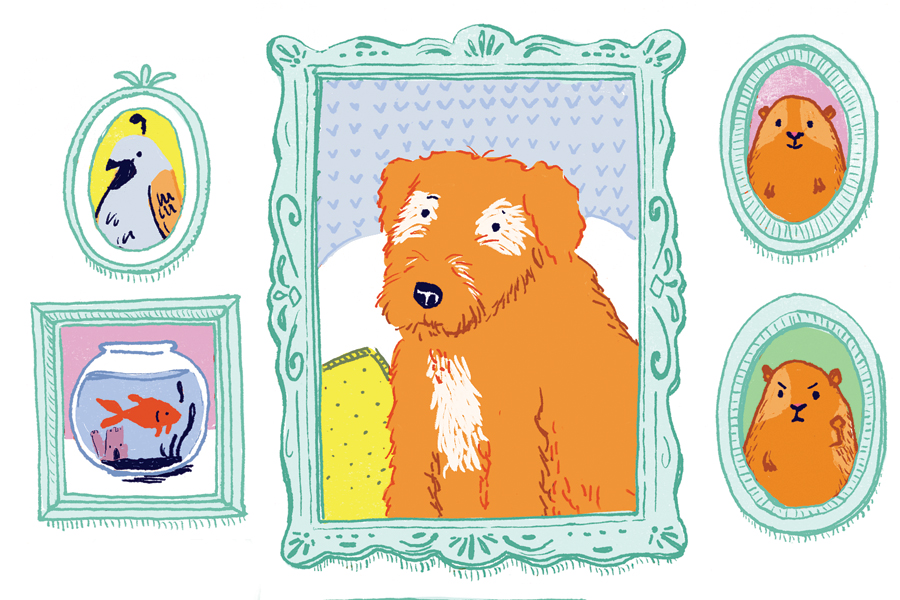 The puppy we got, a cockapoo we named Augie, at first seemed reassuringly eager to please. When, for instance, I stomped out of the house in a fury one night because he had peed on the hall rug (again), he spent long minutes after my return looking beseechingly at me with his liquid brown eyes, as if telegraphing to me how deeply sorry he was for going against my wishes. I felt my resolve to give him the cold shoulder fading.

Of course, he turned out not to be completely submissive. That would have been too easy. We discovered his defiant streak when we hung a bell just off the floor by the back door, for him to whack, to let us know he had to go out to pee. He soon began whacking the bell so hard and often that he dislodged chunks of dry wall from the wall — and the only reason he was making the racket was because he wanted someone to go outside to play fetch with him.

About the same time, we got two gerbils. The pet store employee assured me that the gerbils, both females, would be as docile as you could hope for a pet to be; I would never even notice they were there, really. Fantastic, I said, because my house actually seems to be filling up with animals at an alarming rate, and that wasn’t my master plan.

In fact, the gerbils, Tootie and Schmootie, weren’t at all sedate. Schmootie, in particular, acted like a real bruiser. She was up all night, running on the wheel in their cage. Because the wheel squeaked, we had to move the cage out of our daughter’s room. The basement, however, was too cold for them, and they ended up, by default, in the dining room. One night, a dinner guest was disconcerted to find Schmootie a mere couple of feet away, intently watching him while nibbling on a seed, which she then spit out before she body-slammed Tootie away from the water dish and into the far side of the cage.

“She certainly is an aggressive little girl,” our guest commented.

Weeks later, a friend who knows something about gerbils and other pocket pets was at the house for a visit, and asked if he could possibly pick Schmootie and Tootie up. After doing so, he informed me that they were, in fact, boys.

I muttered about that for a couple of weeks, but even so, some switch in me had been flipped. I had no desire to banish Schmootie from my house. Instead, I realized that I felt as if the animals under my roof were slightly eccentric fellow boarders in a boardinghouse. Like any other housemates, they at times borrowed my stuff and returned it in worse shape than they’d found it: some of the blankets looked like slices of Swiss cheese after Augie, as a puppy, had chewed them. They also undeniably cramped my style at times: I’d be at my desk, working, and Augie would bang the door open and barge into the room, like a sheriff entering a saloon in an old Western.

But, like other housemates, the better I got to know them, the more I realized how much they contributed to the house’s well-being, too. Augie, for example, without fail, greets my husband when he walks in the door from work; I don’t have to stop what I’m doing to go say hello to my spouse.

Also on the plus side, your pets keep you humble: It’s impossible to have delusions of being a master entertainer, one cut from the same cloth as Martha Stewart, when you look down the table at a dinner party you are hosting and notice that your small, submissive dog is trying to hump a guest.

Further, they keep you humble by reminding you, by their actions, to not lose sight of one of the really important qualities in life: loyalty — especially to those who live under the same roof as you.

And then, in a reversal, they build you up, by giving you the gift of needing you — not to say the right thing, or do the right thing, both of which can be so difficult — but to just be there with them. After Tootie died, Schmootie would rush over to whatever part of the cage I was near. I’d sit down for a moment, and ask him how he was, and what was new, and he’d look at me as if he sincerely wanted to know how things were going for me, too.

The other day, my husband arrived home, lugging a framed portrait, and hung it at the top of the stairs on the second floor. It is a seventeen by twenty-one-inch photo of Augie looking noble, sitting on a creamy satin couch. My husband’s colleague Dave is developing a side business taking photos of people’s pets, it turns out. So my husband brought Augie to work one day to have Dave take his photo.

“Now, that’s going too far,” I said. But I have to admit, I haven’t yet talked to him about taking it down.