Just Peachy: All About Peaches in Rhode Island

Peach season has arrived in all its heady glory. Learn how to pick them, buy them and prepare them from local farmers, foodies and chefs. 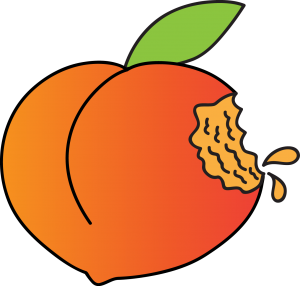 Peach Paradise: Elwood Orchard
Driving to North Scituate is like wandering into a natural paradise. Green, lush trees abound, quaint houses are tucked off narrow, winding roads and you know you’re close to orchard country when swaths of land with neatly arranged trees begin to pop up. The sound of birds chirping replaces the faint whoosh of cars zooming by while the trees of a small orchard, Elwood Orchard, spill down a hillside.

“You can see the small peaches. See the little bit of fuzz on them?”  he says, his oil-streaked hands poking the pinky-nail sized bud. The green, barely visible fruit lines the twiggy branches, little nubs peeking from behind shiny, smooth leaves.  “And we move to this tree.” He takes a few long strides before pointing to another small bud, “This is a nectarine, and you see that there is absolutely no fuzz on it.”

Peach, nectarine and plum trees are planted in rows down to the driveway, while across the gravel, apple trees raise their gnarly branches to the skies. The land used to be part of Stuart Orchard until Al and his wife, Jean, purchased it.

“My grandparents grew fruit and my father has always grown fruit, so it just seemed like something I was interested in. We bought the land in ’80, and in 1991 we planted nectarines,” Fuoroli says, inspecting a nearby sapling. “A few years after, we started selling from the back of a pickup truck. Then we built the building and that’s where we sell from now.”

Sweat pools on his brow. It’s a hot one, but the sun and warm wind will help the peaches turn from nubs into the juicy peaches people will come in hordes to pick in late August. It will be retribution, since last year the cold whispers of a lingering winter ravaged the peach harvest.

“Last year was the first year that we lost the entire crop,” Fuoroli says. He points to a branch laden with little buds. “We always lose a percentage, but it isn’t that big of a deal. When we don’t lose a percentage, like it’s looking this year, we have to hand thin all of these!” he says with a laugh.

Suffice it to say, this year’s peach picking looks promising.

“They’re not the kind you’ll find in the supermarket.”

He says you can’t beat eating a peach plucked fresh from the tree, still warm from the sun and about to burst with juice.

“Honest to God, whatever variety you choose, they’re all so, so good.” Elwood Orchard, 58 Snake Hill Rd., North Scituate, 949-0390, elwoodorchard.com.