There’s a new cow in town. Reared the archaic way—on that under-used natural resource, grass—it makes for a steak that’s as local, and as delicious, as beef gets.

It arrives. Five slices of char-grilled sirloin, medium rare, fanned across a low mound of autumn vegetables. A green dab of salsa verde punctuates the striated slices, perfect contrast to the pungent pink-red of the meat. A pretty plate, unpretentious, assured. I take a bite.

What settles onto my taste buds is beef, but not quite like any I’ve known. It’s somehow more real. That sounds small, but taking my second bite, making sure I’ve not concocted the sensation (I have not), it’s huge.

My carnivorous past reshuffles. Those buttery filet mignons: velvet confections. Those skirt steaks: vanilla, bland. This, here, on my plate, is beef. I’m newly ravenous. I want everyone else sitting at the bar to put on my culinary headphones, to take a bite of the first beef of their life.

I also want to know where this beef comes from. Do I not taste Western rangelands, Kansas City stockyards… cowboys, somehow? Yet my menu tells me that the beefiest bites I’ve ever chewed come from, of all places, Portsmouth.

Beef from Aquidneck Island? This I need to see. 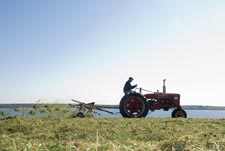 Which is why now I lumber through high, dew-laden grasses, watching a Black Angus herd masticate its landscape. The broad, midnight-black animals step purposefully through the pasture, massive heads bobbing and swinging, grinding stems between the square, flat-ended teeth evolved for just this motion. I marvel at a square acre that had waved, knee-high, in an ocean-borne breeze just yesterday, left scrubby and tundra-like today as herd manager Mike Victor moves his bovine crew to the next acre of grass.

It seems so simple, these cows, gently contained by a single strand of lightweight, electrified cord, chewing their way toward maturity—and, yes, harvesting. If it seems old-fashioned, it is. But this is also our newest, most progressive form of beef farming. Feed-lot, big-scale beef is not only anachronistic, it’s unhealthy, uneconomical, even unethical (see “Why Grass-Fed,” page 71). The new dictum is simple: Return cows to their designated ways of life. Allow them to walk around and eat the type of plants their multi-stomached bodies digest most efficiently and that naturally combat disease (such as red clover, a natural de-wormer). Allow them to be cows.

In return, we gain meat with just enough fat and no more; meat that is antibiotic- and steroid-free. And finally, we in Rhode Island gain meat that has been reared, slaughtered and butchered in-state and close to home.

That last part is a recent development. Until last year, no slaughterhouse in Rhode Island would handle the small needs of individual farms. “What farmers had to do was truck their cattle all the way to places like Vermont for slaughter and butchering,” says Noah Fulmer, executive director of Farm Fresh Rhode Island. “It was expensive and hard to control the quality.”

Local beef farmers formed the Rhode Island Raised Meat Cooperative in 2003, which gave the group enough clout to strike processing deals and get approval to sell retail. Rhode Island beef was in business. Now local cattle travel to Johnston for slaughter, Westerly for butchering, and your local farmers’ market for sale.

Jim Booth reluctantly leaves his fields for a mid-day chat in Aquidneck Farms’ tidy office. Tall and taciturn, his white hair largely covered by a John Deere cap, he is enough of a gentleman to set his chores temporarily aside, enough of a farmer to shift in his seat, itchy to get back to his land and cattle.

And why not? Booth has farming in his DNA, laced in by generations of Aquidneck ancestors dating back to 1638, many of them farmers. “My father, who grew up on a farm, said he had to go to war just to get a good night’s sleep,” Booth jokes, a quiet reminder of the relentless rhythm of agricultural life. 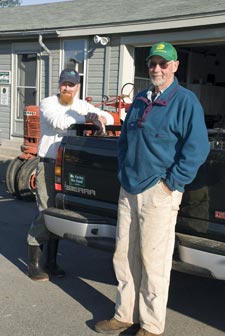 Booth learned carpentry as a young man, and created a career for himself building houses and overseeing construction. It was a great living on an island that turned increasingly from agriculture to development.

But he always farmed. “My wife and I raised our own beef,” he says. “We raised corn, grew market pumpkins. I used to be in my barn at four in the morning to get my animals.” With one hand on a hammer, one on a hoe, Booth was a prime target for Barbara Van Buren, a New Yorker who’d acquired Vaucluse Farm. A historic Ports-mouth dairy farm that Booth remembered with great fondness growing up, Vaucluse had run down. Van Buren asked Booth’s help with various construction projects. Within a few years, he was running fourteen Hereford cattle on Vaucluse’s revitalized pastures. “I had a vision of grass-fed beef,” he says simply. “I took a picture and sent it to her with a note. I wrote, ‘There are cattle back at Vaucluse.’”

It’s a pretty picture. With the help of Farmscapes LLC, a company dedicated to protecting threatened farmland parcels, Jim Booth holds one hundred and thirty acres in verdant trust. Here, on his Aquidneck Farms, he grazes seventy-five head of Hereford and Angus, slowly building a business model of sustainable, gentle agriculture in a modern world. Booth hired Mike Victor last spring, and the thirty-eight-year-old herdsman’s deep knowledge of grass-fed techniques, gained in agricultural school in New York as well as work on a grass-fed dairy farm in Massachusetts, bolsters Booth’s avid agricultural mind. From carefully managing the mix of grasses in the fields to researching semen that will strengthen their herd’s traditional lines of grass-eaters, from eschewing hormones and antibiotics to entering into partnerships with Providence restaurants such as La Laiterie and New Rivers, they are a quietly powerful team.

Today, they’re proud of their latest project, a portable henhouse under construction in a nearby shed. The idea—to haul a small flock of poultry into the fields each day—is brilliant. “They eat bugs,” says Victor. They will be another gentle control on nature, keeping the insects that molest his cattle in check without having to resort to chemicals.

Of course. Chickens chasing cattle. Small details, beautiful details. The dogs bark. Cattle low. Hay is harvested for winter. Nearby, an SUV flies heavily by on Wapping Road. From the vantage point of a field at Aquidneck Farms, it is a black fly, fat and buzzing, laboring at reckless speed. It seems outdated, ready for extinction.