It’s National Eating Disorder Awareness Week, and Project HEAL (Help to Eat, Accept and Live) has initiated a social media campaign to encourage people to step out of their comfort zones. 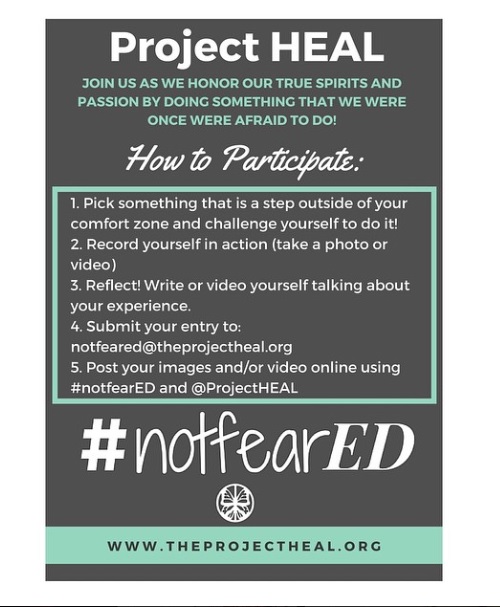 Project HEAL raises awareness of eating disorders and fundraises to provide treatment grants for individuals who cannot afford life-saving professional treatment. The founders of Project HEAL, Liana Rosenman and Kristina Saffran, met while undergoing treatment for anorexia nervosa at just fifteen years old. The two girls helped each other reach full recovery, and decided to help others as well. Since its founding in 2008, Project HEAL has sent twenty-one applicants to treatment. There are currently more than forty chapters of Project HEAL across the United States (including in Rhode Island), Canada, Mexico and Australia that work to promote the mission and values of Project HEAL.

To participate in the #notfearED social media campaign, you can simply post to Twitter, Instagram or Facebook, and also email pictures, videos and inspiring stories to notfeared@theprojectheal.org. Once all the submissions are in, Project HEAL will create a public service announcement. The organization wishes to spread awareness about eating disorders and self-esteem in a positive way, where people can go on adventures, break barriers and step outside of comfort zones.

Here's an Instagram shot of how Lillibridge is participating in the campaign.

Who says a journalist can't have a little fun? #notfearED