Once at PPAC: Six Things You Need to Know

The Tony Award-winning musical, based on a 2006 film of the same name, launches its national tour right here in Providence. 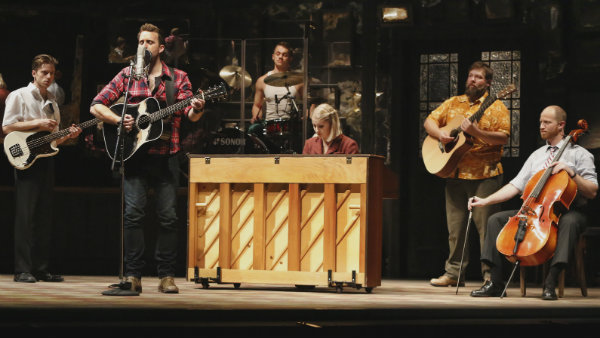 It’s tough to choose just one favorite thing about Once. The Tony Award-winning musical, based on a 2006 film of the same name, launched its national tour right here in Providence on Tuesday, so we’re already off to a good start.

But, really, is it the haunting score? Or the sweet, flawed characters? Maybe, just maybe, it’s the emotional rollercoaster ride of a plot. There’s one thing we’re sure of: You should see Once fast — before the rest of the world falls madly in love. Here’s what you need to know:

The Setting: Dublin, though Czech accents are just as prolific as Irish ones. Most of the action takes place in a music shop, though sometimes it’s a pub or a night club or a bedroom or a vacuum repair shop. During intermission, the stage transforms into a real-life barroom, where patrons purchase beer, wine and water and feel even more imbedded in the performance.

The People: Guy, a heartbroken vacuum repairman played by Stuart Ward, meets Girl, a quirky yet cautious immigrant from the Czech Republic played by Dani De Waal. Other characters, including a shop owner, a clan of rambunctious émigrés and a banker, also steal the spotlight and never quite leave the stage, sitting in the shadows until it’s their turn to shine.

The Plot: Guy wants to give up his dreams of music, but Girl adorably won’t let him. Sparks, and a gloriously haunting score, ensue. If it sounds like something you’ve seen before, it’s not. The twists and turns in the storyline keep the audience members leaning forward, summoning the magic.

The Music: The performers play their own instruments, a feat considering all the additional jumping, dancing, singing and acting required of them. It feels inaccurate to call them stage actors; the raw talent, validated by a wall of mirrors exposing every strum and pluck, elevates the performers to triple-threat status. And it’s not just the leads; everyone on stage is effortlessly talented, playing fiddle, violin, drums, guitar, piano, accordion, cello and probably even more instruments than we remember.

Why You Should See It: Independently, the plot is enchanting and the Grammy-winning score is beautiful all on its own. Put together, it’s a musical masterpiece; PPAC’s romantic auditorium only enhances the experience. Trust us: you’ll want to see this musical, and more than once. The signature tune, “Falling Slowly,” will be stuck in your head for days, and you’ll be glad because it makes your heart flutter. Here’s a preview of the tune, performed by the original Broadway cast: