If the City of Providence evicts Occupy Providence from Burnside Park, what would happen next?

Note: This blog entry was updated from a previous version.

Yesterday, Mayor Angel Taveras went down to Burnside Park to meet with the group. He attended their general assembly and accepted a letter drafted by members of the movement.

"The city has had constant contact since the very beginning when they first set up camp, and we hope that will continue," says David Ortiz, press secretary for the mayor's office. "The mayor thinks the Occupy movement is an amazing example of organization on a national and global level to call attention to real issues in our society."

Joe Lackey, Jr. has been involved in Occupy Providence from day one and he pointed out the different "cliques" that have set up camp in separate areas of the park; Brown University and other college students, socialists, anarchists and the homeless. There is a kitchen area where three meals a day are served. Lackey says there are no cooking facilities, but that the food is being donated. There's also a press tent where questions can be answered and more information and pamphlets can be obtained. An upside down American flag (a symbol for distress) has been draped over the equestrian statue of Ambrose Burnside.

"It's been an emotional off-shoot from what's been going on in New York City, nationwide and worldwide," Lackey says. "We are just trying to enlighten the people that we're being ripped off by big businesses and corporations. There's power in numbers, and things can change if we awaken people and we bring attention to it."

But as the numbers of protesters increase and the weather grows colder, there are legal health and safety risks that must be addressed, says Ortiz. "The city may opt to file a legal injunction which would go to the Superior Court, and a judge would legally review whether permanent encampment is covered under the constitutional right of freedom of speech."

Ortiz says it would be up to the Superior Court to make the decision, and there is no way to determine how long it would take.

"Steven Pare has been gracious so far in letting us stay here and assemble peacefully," Lackey says. "It hasn't been discussed what would happen next, but there has been some talk of moving to Roger Williams Park. Everyone would probably just move on to the next destination." 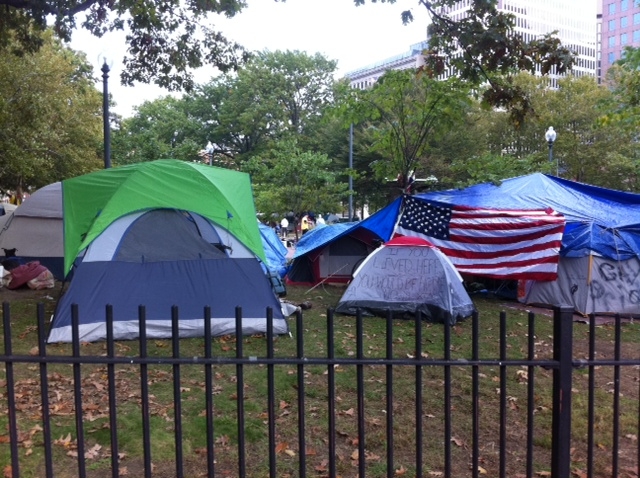 Here is a letter written by Occupy Providence, taken from their facebook page:

We, the people of Occupy Providence, would like to express our gratitude and appreciation for the continued respect shown to our just and legal gathering. We have found the welcome of the City of Providence to be warm and cordial, and the support of the people of Rhode Island to be firmly on the side of justice with regards to our grievances. We are both humbled and grateful to those whose outpouring of goodwill has been of benefit to our cause.

We assembled on the 15th of October, 2011 in order to redress our grievances and commit to one another in support of liberty and the free exercise of speech by all manners of people. Since then, the Occupy Providence movement has become a living symbol of how, through the commitment of members and officials alike, a peaceful assembly can gather non-violently to address complex and pressing issues of injustice.

We have recently learned that the city seeks to take legal action against our assembly in Burnside Park. We believe that our presence is a legitimate exercise of our Constitutional rights to free speech in protesting the abuses of authority and the failures of inaction that have marked our era. To this end, we respectfully restate our intention to remain in Burnside Park for however long it takes to build a society by, for and of the people.

With this understanding, we welcome a dialogue between city officials and our General Assembly about our continued presence in the park and ways in which we can facilitate the maintenance of a safe and clean public space for all. 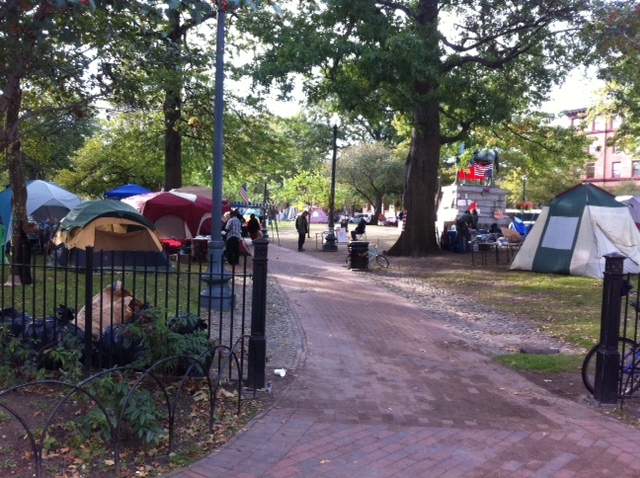 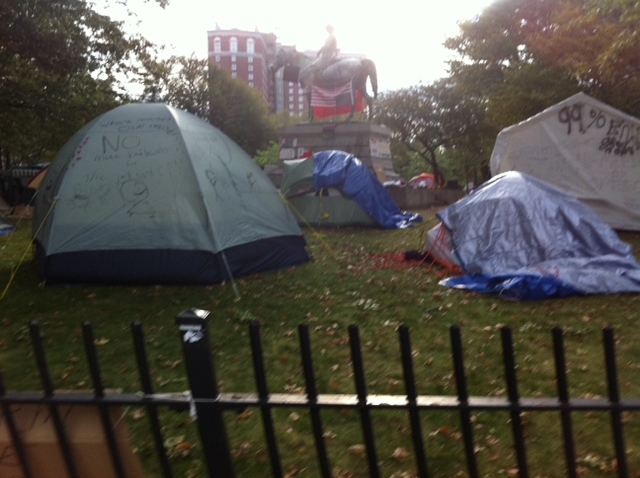 The upside down American flag is a symbol of distress. 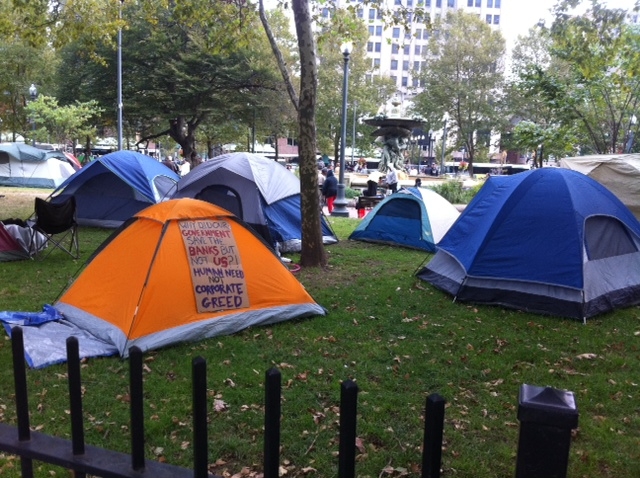