Nautical design lands squarely in one of two camps: chic or kitschy. There’s rarely a middle ground. Happily, the renovation of the former caretaker’s cottage for historic Moorland Lodge in Newport can be labeled the former. It helped that the owner, an avid sailor, could discern authentic details from fakes. It was an important distinction, since he’d be using the small 1940s Cape as a place for his crew to rest their heads between races. To take on the task of transforming the cottage into a high-end crash pad with plenty of nautical details, the owner assembled a team led by Kelli P. Rugg of KPR Interiors, who worked hand-in-hand with Mohammed and Dorienne Farzan of Newport Architecture to get the job done. Rugg, a good friend of the owner, had a clear vision for the project. “I told him, ‘We’re going to do seaside chic but you’re not going to see a sailboat in a print on a pillow,’ ” she says with a laugh. 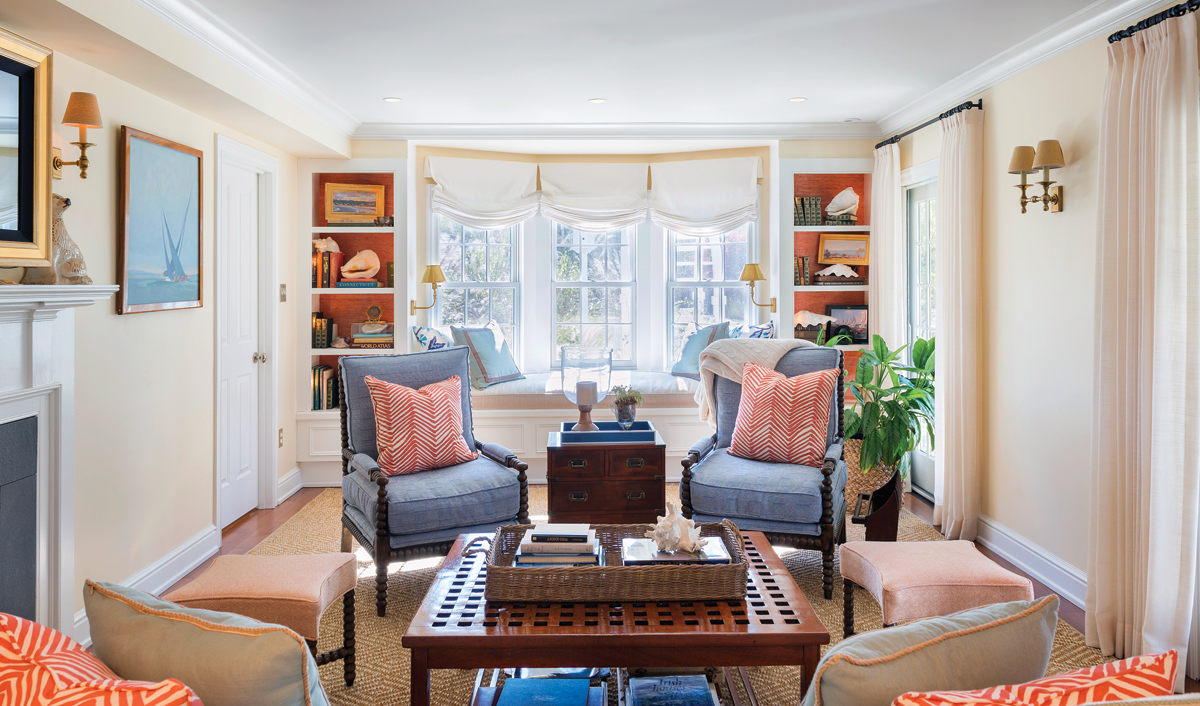 A ship’s grate repurposed as a table serves as the living room’s centerpiece. Photography by Nat Rea

When sourcing wood, Rugg made sure everything matched in tone. In the powder room, charts of some of the owner’s favorite places were dipped in tea to give them an antique feel before being made into wallpaper. In the breakfast nook, a photograph printed on canvas by local photographer Onne van der Wal adds a finishing touch. Photography by Nat Rea

Inside, the owner wanted plenty of room for post-regatta entertaining. To help with the first floor’s flow, a partition between the dining and living rooms was removed. Rugg then called on several local marine craftspeople to give the home a boat-inspired feel. Middletown’s Wetstone Design and Millwork built a curved teak wall and kitchen island finished in marine-grade varnish, and Jim Thompson at the Newport Shipyard created a custom folding table typically used in yachts for the breakfast nook. “Being in a seaside town that has so many skilled marine craftspeople, I was able to pull all of this together,” Rugg says. Other features, like the reclaimed fox lights in the kitchen, were found locally. Same goes for the bar area, which is filled with marine antiques Rugg discovered here and there. Boat propellers hanging above the bar’s French doors, which weigh a collective 200 pounds, were scored from a New Bedford shop. Undeterred by their size, Rugg had extra support added to the wall to hang them securely. 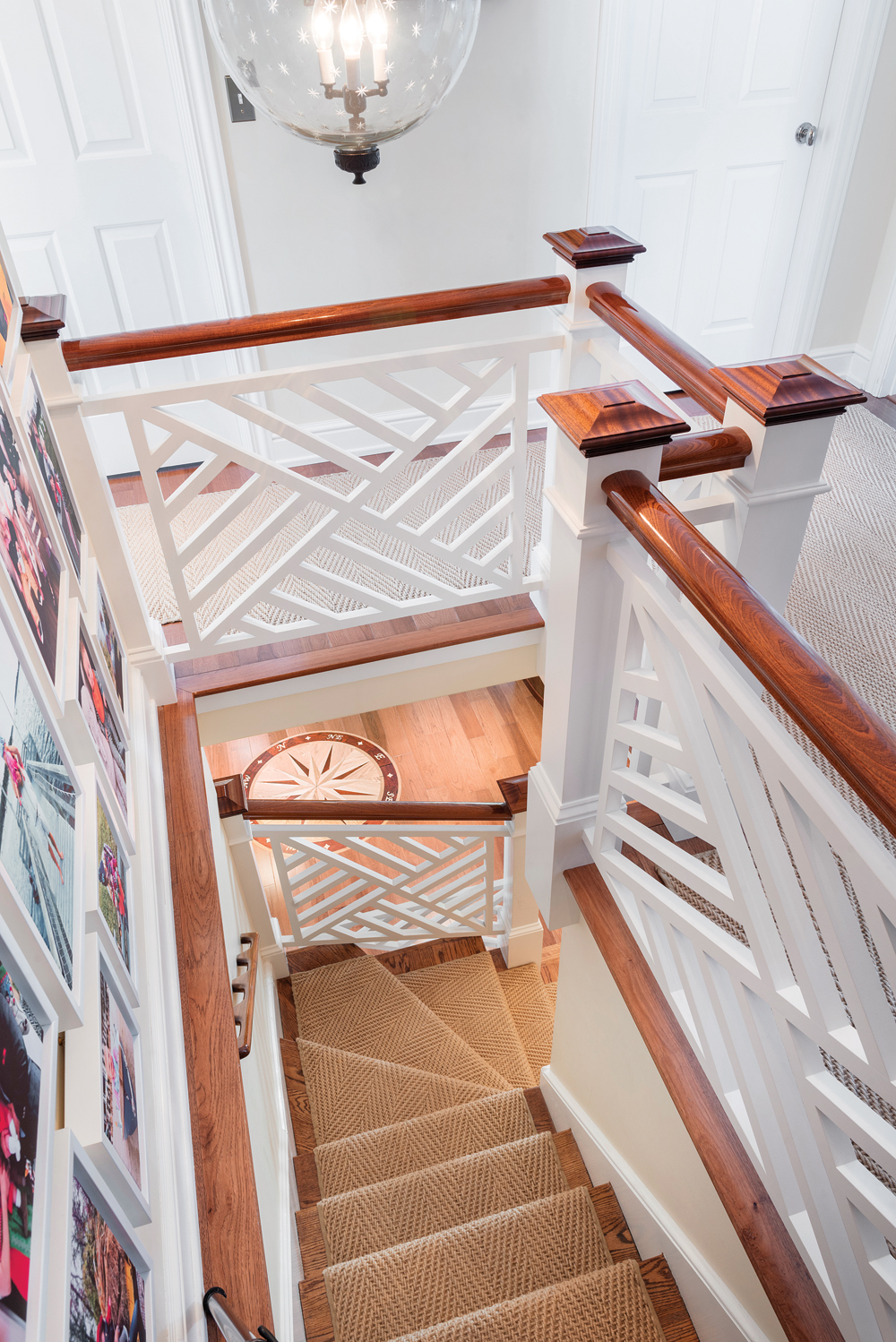 Located at the end of a half-mile drive down the street from Fort Adams, the house sits on a tranquil plot overlooking iconic Newport Country Club. From the beginning of the renovation, the owner was adamant about maintaining the home’s original New England charm and working within its existing footprint. “He didn’t want to turn it into a McMansion, which somebody else might have done,” says Dorienne. “That was not his vision at all.” To clean up the outside, the architects, working with Woodland Building Company, pushed the second floor dormer up and out to add ceiling height and moved the front door to the breezeway to make room for a new porch with French doors. Clapboards were swapped for shingles, a more traditional choice that also gave the facade instant dimension. Several windows were added to the kitchen to let in more light and the sunroom was updated for year-round use.

Above, every measurement had to be exact to fit the four beds in the bunkroom. Throughout the home, designer Rugg took pains to make sure that even new furniture, like that in the master bedroom, had a patina that made it unique. Photography by Nat Rea

Details are as abundant upstairs as they are down, starting with the staircase. The railings’ Chinese Chippendale pattern nods to styles found in many of Newport’s most iconic homes and mirror those found on the balconies. The second floor holds several bedrooms, each with their own distinct look. The master bedroom now has vaulted beadboard ceilings thanks to that expanded dormer, while its French doors open up to a small balcony with expansive views of the country club. Down the hall, the custom bunkroom, once designed for weary sailors, houses slightly younger occupants these days. Shortly after the renovation was complete, the owner got married and now the couple and two little boys commute from Boston to spend time at the house. Together, the family named the home Bird Song, a nod to the Grateful Dead song and the couple’s love of the feathered aviaries, which are abundant in the gardens. That the house has been changed little to accommodate the owner’s new circumstances should surprise no one. Good design, after all, lasts longer than one leg of life’s voyage.