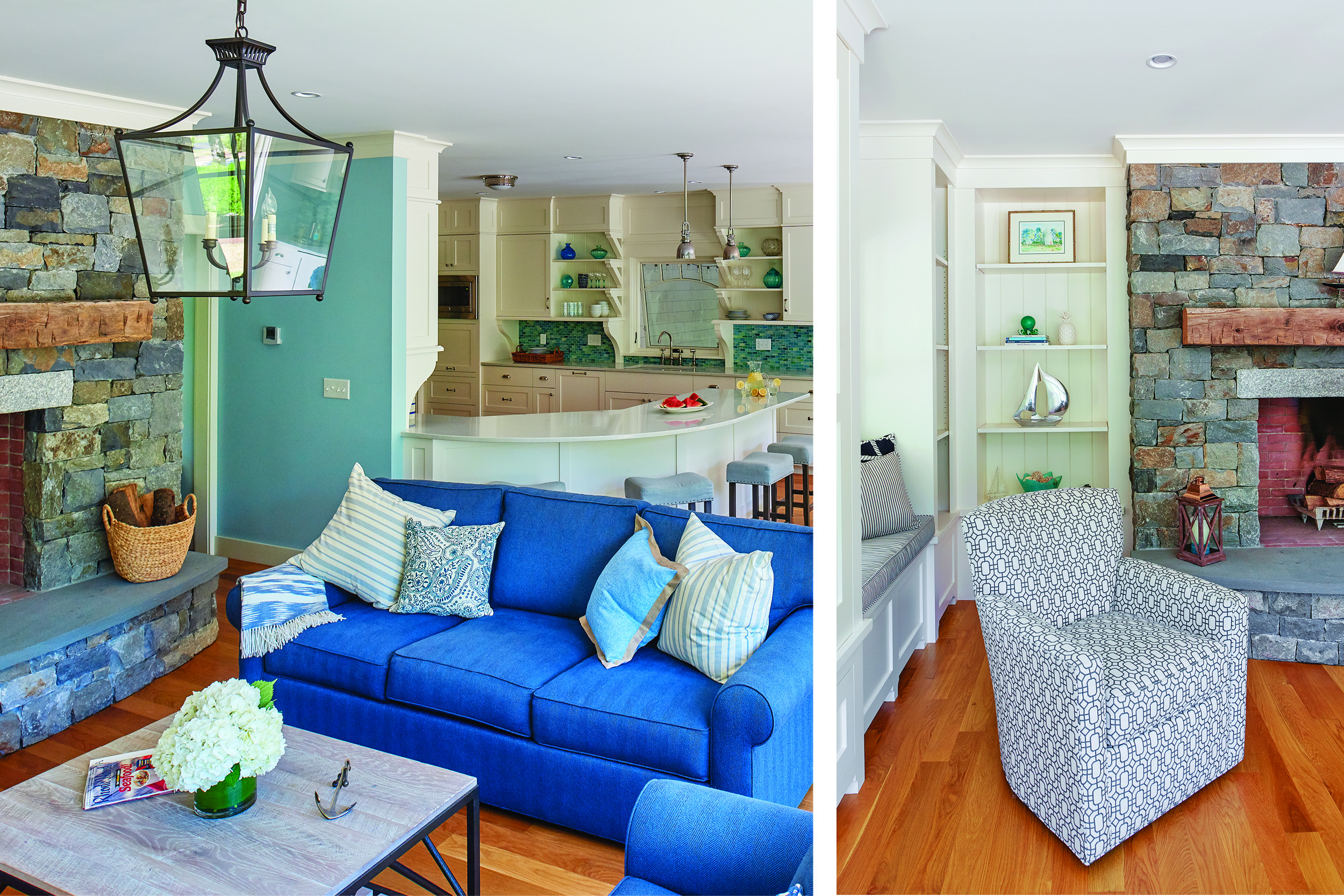 The fireplace is show-stopping, yet streamlined, while features like built-in benches and bookshelves keep the home squarely in traditional territory. Photography by Tony Luong.

Entry Point
To renovate or to build? That’s the age-old question that plagues many an aspiring homeowner, and this family — native Rhode Islanders who live and work in New York City but were looking for a getaway in their home state — was no exception. Initially, the former seemed an obvious choice; the owners had already set their sights on a fixer upper in Jamestown’s Shoreby Hills. But when a lot within walking distance of picturesque Mackerel Cove presented itself, the choice was clear.

The owners tapped DiMauro Architects in Jamestown to design an abode that was classic in composition yet informal in feel, a place where they could arrive and instantly relax.

“They wanted to evoke a feeling of days gone by and pay homage to the shingled cottages that dot the coastline,” says architect Laurie Keene.

To capture those carefree vibes, the architects kept the downstairs layout open, eliminating hallways wherever possible.

The centerpiece of the lower level is the fireplace, with its welcoming, yet dramatic, profile that exudes a been-here-forever charm. Upping the appeal is the railroad tie-turned-mantle sourced by builder Gardner Woodwrights, as well as the raised hearth that invites visitors to sit and socialize. 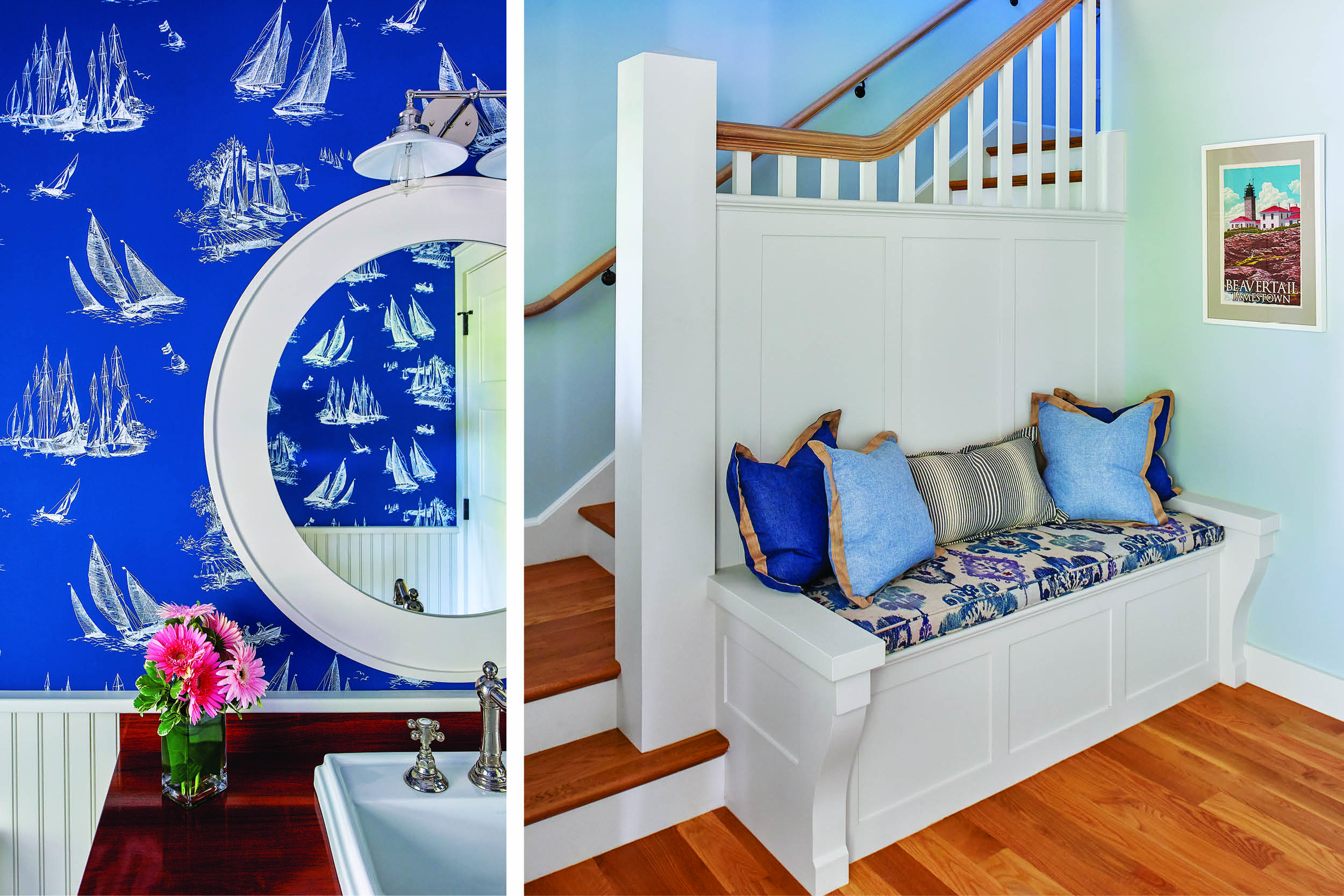 Left, the first-floor bathroom is decidedly nautical thanks to detailed wallpaper and a circular mirror reminiscent of a porthole. Right, the entry, with its bench and oversized newel and stair railing, evokes an earlier era. Photography by Tony Luong.

The feeling of old meets new continues throughout the rest of the lower level. Finishes, inspired by the colors of the seashore, make the space bright and playful. This is particularly true of the multihued kitchen backsplash, which brings all the interior colors together. A similar selection adds life to the master bathroom.

To emulate turn-of-the-twentieth-century design, the architects added an oversized entry bench along with a weighty newel and railing for the stairs.

Other areas speak more to lifestyle than aesthetics, including a built-in bench and cubby wall in the mudroom and custom mirrors and backplates in the master bathroom. A second bathroom upstairs received equally thoughtful treatment in the form of a double-bowl vanity that’s separated from the shower and commode so that multiple people — i.e. the owners’ daughters and friends — can get ready simultaneously. 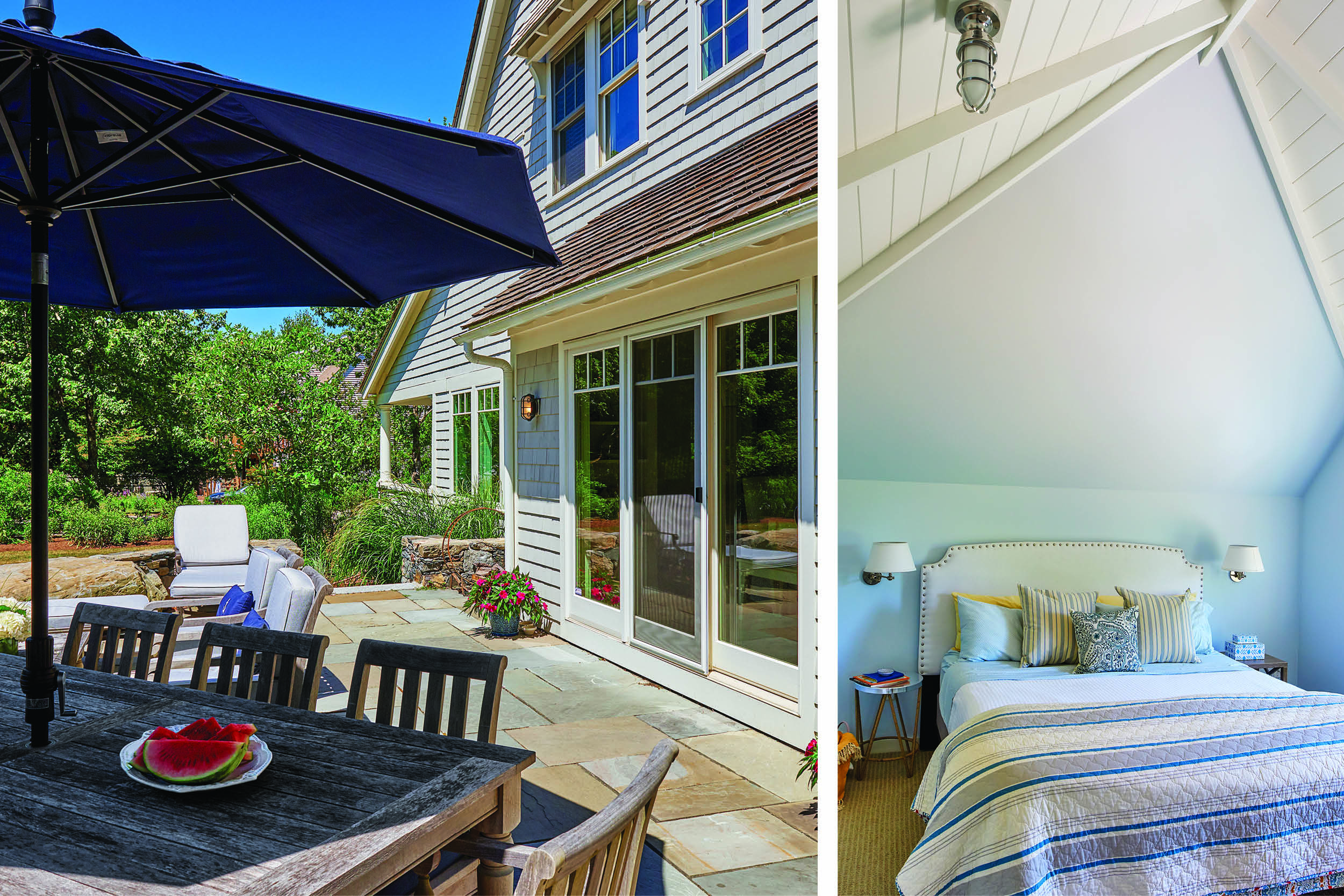 The peaked ceiling in the master bedroom adds volume to a small space. Below, the terrace gives the family plenty of room for outdoor living. Photography by Tony Luong.

The architects took great pains to make the house feel as custom as possible. Those efforts are apparent in the nine-foot ceiling heights throughout, raised to accommodate the very tall husband.

“No one likes when they feel as if they have to duck to walk into a room,” Keene says.

In another personalized touch, common living spaces were turned to the south to counter the deep covered front porch and allow in as much natural light as possible.

In typical DiMauro style, emphasis was placed on character rather than size. Instead of stifling the creative process, it forces the architects to work within a smaller footprint while simultaneously maximizing space. For example, the v-groove ceiling in the master bedroom increases the room’s volume without compromising its cozy, classic feel.

To ensure the family could enjoy the outdoors as much as possible, a bluestone terrace was placed just outside the living area, an instant access point to fresh air and sunshine that adds to the interior’s overall feel
of informality and relaxed lifestyle. 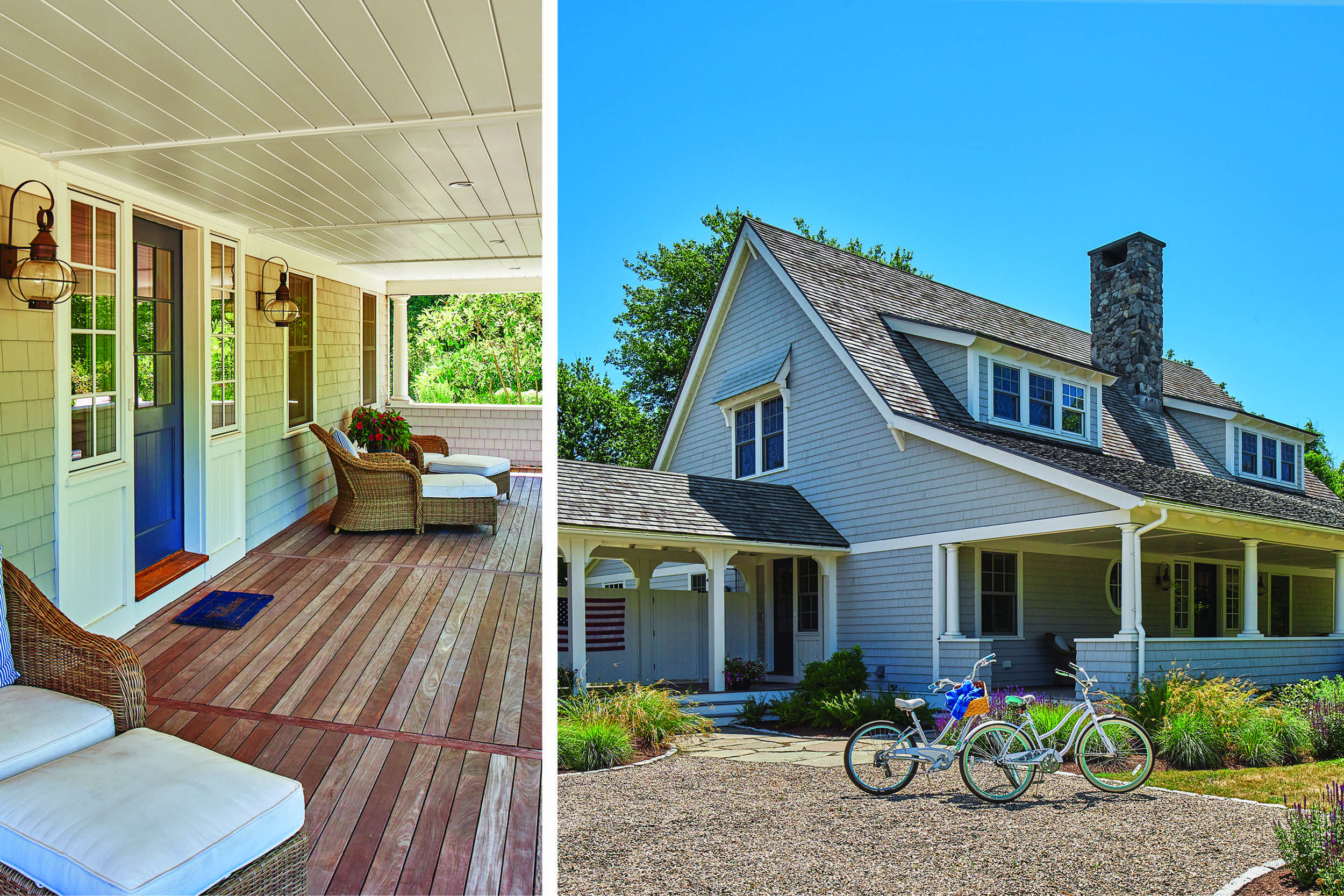 The deep front porch is the ideal spot for lazy weekends. Right, the covered connector, while breaking up the house visually, also provides a protected entry from the garage to the mudroom and laundry. Photography by Tony Luong.

One of the challenges of this design was the location. With the corner lot adjacent to both a busy main road lined with smaller homes and a private cul-de-sac, it was imperative to the architects and owners that the house blended with both environs. The DiMauro team found that balance with a design that harkens to the American Shingle-style cottages of the 1890s. Even the garage and connector were carefully considered: The former was built to look like a quaint guest house, while the covered walkway was kept intentionally simple.

Other details, like the oval window by the front door and the protruding breakfast nook on the south side, break up the symmetry of the home and keep it from feeling too formal.

The oversized front porch and stately chimney are the first things guests see when they turn down the street. The statement-making structures serve to ground the house visually and enhance its timeless feel.

Design-wise, the front porch, with its curved, shingled stairs, goes a step further.

“The stairs are meant to look as if they are bringing you in for a hug, rather than push you away,” Keene explains.

It’s hard to imagine a warmer welcome than that.