We explored the five key islands in upper Narragansett Bay from the Colonial-era song for schoolchildren: "Prudence, Patience, Hope and Despair, and Little Hog Island, right over there." 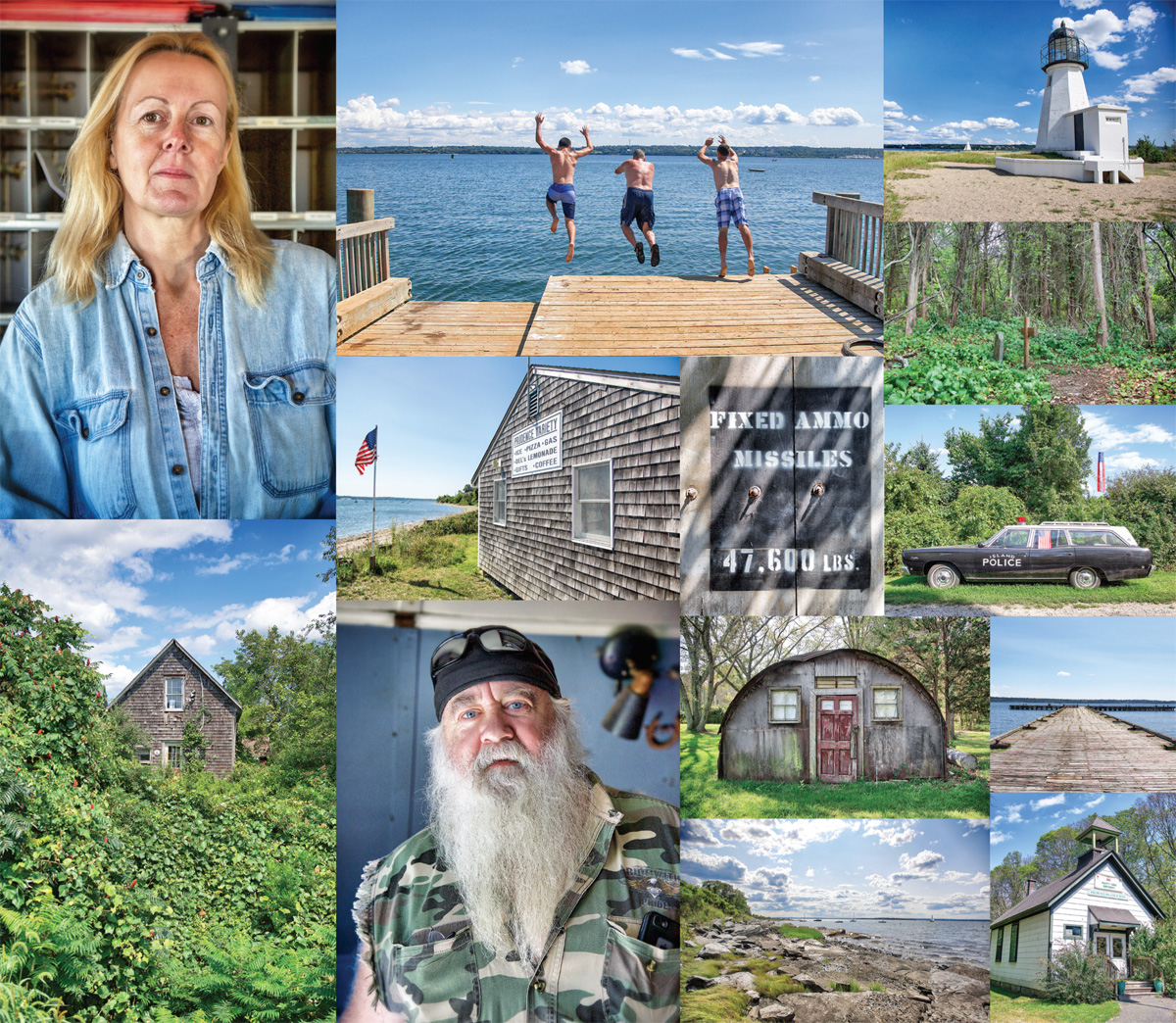 Lori Cubellis stands at the post office inside the general store. Ray Jenness, center, jumps off a dock with his two nephews. The Prudence Island lighthouse was built in 1823 in Newport and moved to Prudence Island in 1851. A cross marks the burial site of a British soldier who was killed during the Revolutionary War. The island boasts one police officer and one cruiser. The T-wharf on the island’s south side was built by the Navy during World War II. The schoolhouse now serves as a charter school for year-round children. The old Quonset hut on the Walshes’ property served as Cubellis’s childhood home. Brian Walsh and his wife, Vicki, are building their dream chalet on the island. Gray-shingled cottages are prevalent on Prudence. Prudence Island’s general store operates during ferry hours in the off-season. This old ammo bunker is located on the island’s south coast. Photography by Michael Cevoli.

Ray Jenness, a seasonal resident and chair of the Prudence Conservancy, is onboard the 9:45 a.m. ferry from Bristol to Prudence Island, heading out for a few days of respite. It’s peak summer, and Jenness’s commute is akin to that of the native population centuries before.

“The island was a pre-Colonial Indian summer grounds,” he explains. “The idea was: It’s summertime; why would you stay in the city? They would camp at Pine Hill [on the island’s west coast]. If you dig down into the dirt, you’ll find piles of shells they left behind. You could tell where they were hanging out.”

The Narragansett people, who refer to the island as Chibachuweset, conveyed it to Roger Williams and Governor John Winthrop in 1637, who returned the gift with twenty fathoms of wampum and two coats. The men split the island in half, with Williams taking the north side and Winthrop claiming the south. Their shares are marked by Division Wall, which still stands today, just south of the ferry landing.

The theologian and Rhode Island founder named the island Prudence, and its nearby counterpart, Patience — which is sited to the northwest and was part of the deal with the Narragansetts — after desirable virtues.

Soon after the purchase, colonists flocked to Prudence Island for its abundant waters and fertile farmland. But the island was co-opted by British forces during the Revolutionary War. The soldiers chopped down all of the trees and set fire to nearly every house on the island, with the exception of the Blind Allen estate on Prudence’s western shore, near the cemetery. By the end of the war, a combination of sea winds and scorched land created Rhode Island’s very own dust bowl.

Residents began rebuilding in earnest in the 1870s. By the early 1900s, development boomed on the East Side, where most residents live today. The homes were primarily two-by-four constructions, without interior walls. But some residents brought their own abodes. Jenness’s father’s house was a barn that was disassembled in Bristol, floated over in the bay and rebuilt on-island. Jenness’s sister’s home is a newer construction on Allen Avenue, just uphill from the ferry landing.

In its heyday, Jenness says, the island boasted hotels, bakeries, a casino, yacht clubs and other attractions — far more things to do than present day. Many of these amenities were destroyed in hurricanes in 1938 and 1954. Only the general store by the ferry, which doubles as a post office, remains today. It’s operated by Lori Cubellis, a year-rounder whose mother, Marcy, ran the store before her.

Cubellis was born on Prudence Island, moved off for a while after she was married and returned to raise her two children. Wearing a denim shirt and jeans, Cubellis stocks vegetables and neatens shelves with snacks and dry goods. She’s a stoic woman, with an islander’s hardy dignity.

She’s got a sadness to her, too. Life has not been easy, island or not. Her ninety-four-year-old mother — a picture of capability, who ran the electric company, the phone company and the water company, in addition to operating the store and post office — is in poor health. Cubellis’s partner is ill. In 2012, Cubellis’s son died in a house fire on the island.

“Keeping busy helps,” she says. As does a close-knit, supportive community like Prudence.

The store has a small jewelry case with sea glass earrings and necklaces Cubellis made from pieces she found on the island. She also designs the shop’s souvenir T-shirts, including a clever one of a fish skeleton in the shape of the island. She’s just welcomed a new litter of lambs, which escaped from their pen yesterday and wandered the island. And she’s in the midst of selling a home she built herself on Sunset Hill Avenue up the road from the ferry.”

A short walk from the ferry landing, Cubellis’s cousin, Vicki Walsh, is building a home of her own — albeit with some help.

Vicki and her husband, Brian, jewelry designers by trade, are directing three construction workers on a framed-out chalet up the road from the ferry landing. The couple also plans to restore a Quonset hut that served, for a spell, as Cubellis’s childhood home. Cartoon drawings by Cubellis’s dad remain on the walls of the hut, which now houses a collection of vintage chairs, lighting, stained glass and other decor that’ll go in the Walshes’ finished home.

We search a bit for Cubellis’s lambs, who have gone rogue again today, then decide to head out to the southern end of the island.

Remnants of the island’s military history are everywhere on Prudence, from the huts islanders used as homes to the vacant bunkers on the island’s south shore, which served as a naval ammunition depot from 1942 through the 1970s. There, you’ll find cement structures with signs denoting “fixed ammo missiles.” In recent years, locals have scrawled friendly graffiti alongside the wartime signage, from flowers to inspirational phrases to declarations of love.

Also on the island’s south coast is the T-wharf — another military relic and a great spot for sunning yourself sans sand — and the Narragansett Bay National Estuarine Research Reserve (NBNERR) learning lab, where summer visitors can learn about research and stewardship projects on Prudence, including invasive species removal and habitat restoration. Approximately 85 percent of the island is protected from development.

Adjacent to the learning lab is Farnum Farm, a Prudence Conservancy property with a community center, a garden, an orchard, a blueberry patch and a small vineyard with Chardonnay grapes. The Farnum family operated the farm from the early 1800s to the 1950s.

Travelling back up the western coast of the island, you’ll find the stone wharf, a relic of the island’s first summer colony that once housed a full-on resort village. Jenness says the conservancy is rebuilding it to keep that history alive.

The little white schoolhouse is a short ride from the stone wharf. The one-room building, which opened 120 years ago, serves five local children. It receives funding from Portsmouth for elementary-aged students and is tuition-based for older ones.

Much of the property between the schoolhouse and the ferry landing is wild — dirt roads shaded by lush tall trees. But for the salt air and the squawking gulls, you might forget you were on an island altogether.

Heading up to Prudence’s northernmost tip, we pass by Rossi Farm, where islanders buy farmstand provisions and grass-fed meat. The northwestern side of the island also offers views of Patience Island, a landmass separated from Prudence by a small canal about 900 feet wide.

Patience is also an NBNERR site, as is nearby Hope Island. Patience is uninhabited but for deer, rabbits and seasonal birds — evidence of which includes an unusually large osprey nest made from sticks, plastic bags, fishing line and some feathers on a dilapidated dock.

Despite feeling as if we could hop from Prudence to Patience to mainland Warwick, we return to the ferry landing to catch the 4:15 p.m. boat back to Bristol. Jenness is heading to Baker Farm, which was operational before and after the Revolutionary War. The site also housed one of the island’s turn-of-the-century inns. In the 1950s, it was selected as a site for a foot-and-mouth disease laboratory, but outcry from the islanders halted the project. Today, Jenness says, Baker Farm is where he and his nephews will play disc golf. 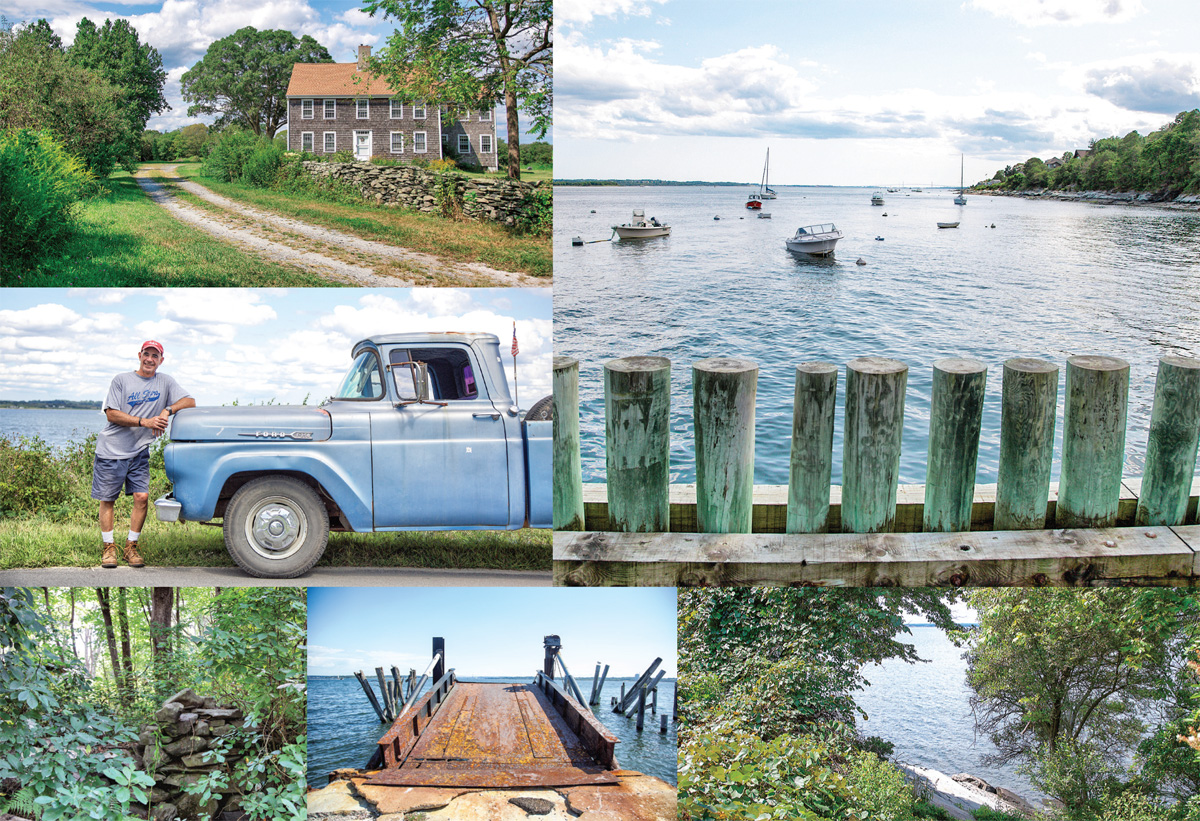 Stone walls cut through the landscape on Prudence Island. Boaters sidle up to moorings off the shore. There are lots of rocky spots that lead to the water on the island. Deep in Prudence’s lush interior, it’s easy to forget you’re on an island. Dave Valletta, who owns a home on Prudence with his wife, Gayle, poses with his 1960 Ford. “There’s a list of people who want to buy this truck out here,” he says. Photography by Michael Cevoli.

IF YOU GO
Ownership: Public
Size: 5.5 square miles
Population: 218 year-rounders; about 1,500 summer residents
How to get there: By public ferry from 147 Thames St., Bristol. One-way tickets are $5.40 for adults, $1.90 for youth, free for children younger than four. Car reservations are accepted; $31 one-way. Bikes are free.
Services: There’s a general store by the ferry dock with snacks, drinks and souvenirs. Public restrooms (with compostable toilets) are on the southern end of the island by the T-wharf.
Key wildlife: White-tailed deer, coyotes, spotted salamanders, several beetle species of conservation concern. Prudence also has a sizeable seasonal population of long-legged wading birds such as herons and egrets. Ticks are prevalent.
Fishing situation: Stripers, bluefish, seasonal shellfishing in Potter Cove.
Don’t miss: The Prudence Island lighthouse, just a few steps from the ferry landing. It’s the oldest operating lighthouse in the state.