Napatree Point is Better Than Therapy

After a harsh winter, few treatments warm the soul like a stroll by the sea.

The first true warmth of spring arrives and my friend Alex and I decide to drive down to Watch Hill and walk Napatree Point, a spit of land tucked away in the southernmost point in Rhode Island.

My fond memories of Napatree go back some thirty years to when my mother first brought me to walk the beach as a child. After strolling along the shore, we would head to nearby Watch Hill, where she would give me a couple of dollars to ride the carousel, in the heart of the village.

The Flying Horse Carousel is composed of twenty horses, suspended by chains underneath a multicolored canopy. When the carousel spins, centrifugal force pulls the horses outward, thus its name. The jolly tune that plays while the horses fly emanates from a hand-crank organ at the center of the main pillar. In 1987, the carousel was declared a National Historical Landmark, but it’s been a Watch Hill fixture since 1879 when a traveling carnival was forced to leave it behind. I still remember gripping the chains as I rode the horses, the leather strap holding me to the hard saddle as I strained to reach for the brass ring.

On this particular spring afternoon, Alex and I pass through Watch Hill on our way to Napatree. I see the carousel spinning like a dervish, the chimes and pipes of the organ music are just as enchanting as when I first heard them. I pause for a moment at the rail and watch the jubilant colors turn, the laughter of the children a joyful counterpoint to music. I wonder how I was ever small enough to fit on one of the ponies, but, then, with a scent of popcorn, candy and ice cream in the air, we press on to the point.

This day hike is the first since I’d dislocated my ankle and broken it in three places. More damaging than the bone breaks was the extensive soft tissue damage done by the dislocation. All of this meant my ankle had an unstable fracture that could only be mended through surgery.

If this injury had happened 100 years earlier, I’d never have walked properly again and most certainly would have re-broken it several times, but, in this day and age, titanium heals all. Run enough screws, plates and wire through the bone and even the most broken of joints can be held together.

Confined to my bed for six weeks after the reconstructive surgery, I went from hiking through the woodlands of New England to shuffling along on a brand new walker — fully outfitted with four spiffy tennis balls. Six months recovery, three months of physical therapy, four different casts and two braces later, I was moving along better each day.

Napatree is the test of the still-healing joint. I’ve exchanged the walnut cane for a metal trek pole, strung my shoes together, thrown them over my shoulder and set out towards the beach. The first hurdle is the rather tall sand dune between me and the sheltered shore. This poses a problem for my ankle, which still has difficulty with certain angles.

“You don’t realize the dozens of corrections the muscles and ligaments in your ankle make to support you in the uneven sand,” I tell Alex as we start the climb, “until you can feel every single tendon firing and straining.”

My foot manages the 90-degree position but pushing off to take the next step is terribly uncomfortable. Determined to see the ocean, I shuffle up the dune and gently maneuver down the other side, descending to the shore, a long rock jetty at my left and the sandy peninsula of the shore stretching out, making my way to the compacted sand along the waterline.

We start down the beach. Pushed by the high gales, the waves drive hard against the shore. Gulls hover like feathered dirigibles overhead, perching expertly on the turbulent wind. Only moments before, they’ve had their morning feast. Opened mussels and scooped out spider crab heads are scattered along the sand. Every now and again we come upon a lone blue mussel on the sand that has managed to survive the feeding frenzy. I pick up each one, aware of the little frightened creature closed tight within, and toss it into the salty swells.

All along the rock jetty erected to shelter Watch Hill, cluster mussels grow as thick as dragon scales. Somehow, I’ve never noticed the colony until now. I follow the wall of rocks into the still cold waters of the North Atlantic. A species of sea lettuce clings in-between the shells, the translucent green interspersed among the black and blue mussels. Something about the densely huddled mussels makes me think about community and the joy of growing together.

Soothed by the surf and fresh wind, I decide (perhaps foolishly) to walk the full length of the beach, all the way down to the remnants of an old fort, Fort Mansfield.

Almost immediately, the smooth path grows difficult. Mounds of dense stone litter the shore. The gravel, while smoothed by the tumbling tide, is rough against my bare feet, so soft from my months of inactivity. A fierce tide must have deposited gritty sand up along the edge. A strip of red kelp pushed up by the waves draws a line from the dunes down along the length of the beach off into the distance. It’s dried in the sun and now waits to be folded back into the sea during the next high tide. Intermingled within the leaves are a confetti of crustaceans and mollusks: tiny sea urchins, clams, mussels and sea slippers stacked one on top of the next (some alive, some dead).

Alex and I always hike altruistically, routinely picking up clumps of still-closed blue mussels and stacked sea slippers stranded high on the beach and tossing them back into the water. Some creatures are sadly beyond aid. Dismembered legs and heads of spider crabs, shrimp, Atlantic blue crabs, rock crabs, lobsters and horseshoe crabs trail along the shore. The brown sand is dotted now and again by the ripped sacks of the devil’s purses — the eggs cases of sharks, skates and chimaeras (most likely skates in this case). 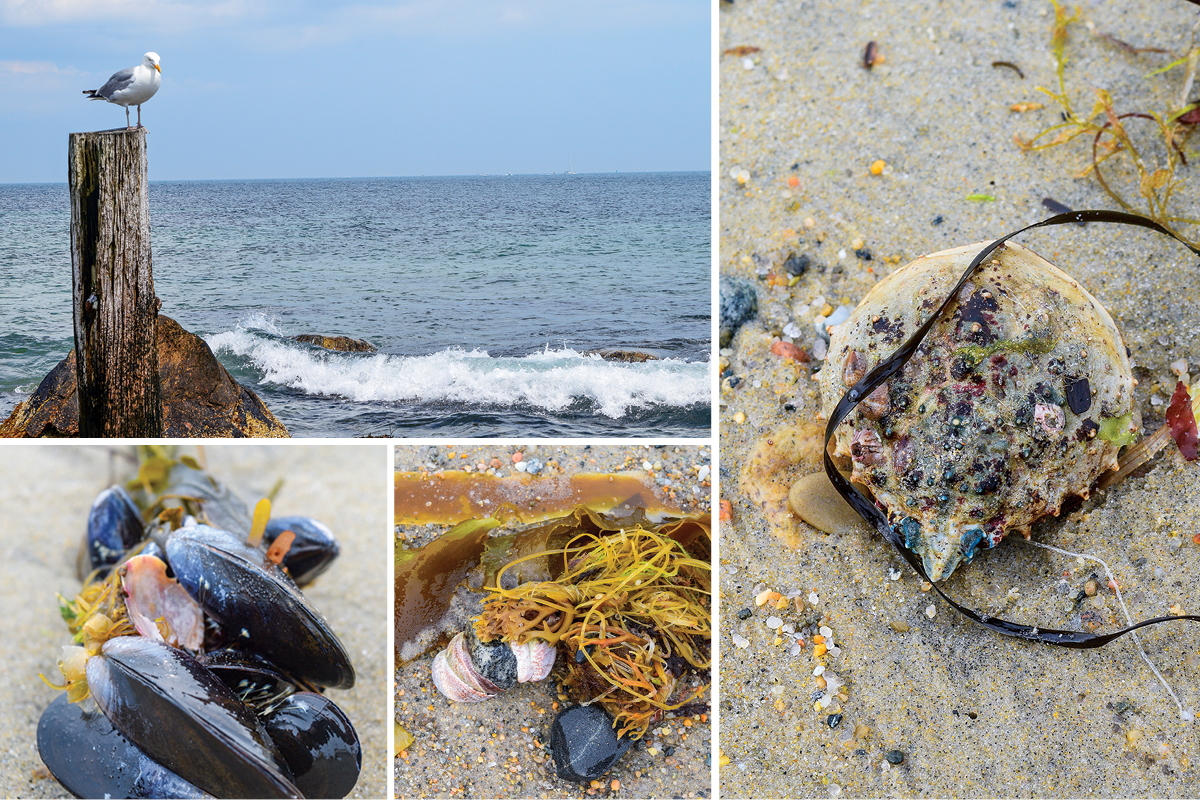 Two thirds of the way down the shore, we spot a small graveyard of horseshoe crab skeletons. The waters around Napatree look like mating grounds for pre-historic creatures. I hover over one of the dead. It’s intact, on its back legs and tail stiffly pointed in the air. “Poor crab,” I think. Alex comes closer to see what exactly I’ve found when suddenly the crab’s legs start flailing rapidly in the air. I lean in to see what’s going on, noticing that the crab has been hogtied — tail in all — by a long piece of red kelp. Gulls start circling overhead, likewise drawn by its movement. Rushing to the crab’s aid, Alex carries him (judging by the small size, it is most likely male) back to the surf where he floats down into the obscured depths of the ocean floor.

We fall silent as we walk on, basking in the knowledge that we’ve accomplished something of value today: we’ve saved a life. (And not just one life actually, but dozens.) You see, while few know it, I am the patron of sea slippers. While walking Napatree, every few yards I inevitably find a stack of the tiny creatures drying out far up on the shore that I must stop and rescue. Something about the smallness of their little community and their fragility compels me to help them.

Sea slippers are prominent along the beach at Napatree so our hike is more a rescue mission than an outing. Often they will cling to rocks, pilings or even horseshoe crabs but usually they live in stacks. As we walk on and I ferry the stranded creatures down to the sea, I think back to the sometimes-absurd lengths I’ve gone to over the years to help animals. Once, when I was eight, I cared for a lone killdeer chick after its mother died; another time, I was learning how to drive on the dirt roads of rural upstate New York when I suddenly swerved.

“What happened?” the instructor exclaimed at a loss. “Woolly bear,” I replied meekly, “there was a woolly bear in the road. It wasn’t like there was oncoming traffic.” I went on, trying to expel the dumbfounded look creasing his face. We came to a stop along the utterly deserted country road. He quickly looked out the back window, “How did you even see it?” “I was looking,” I replied, not knowing what else to say.

For as long as I can remember, i’ve felt an overflowing empathy for wildlife. I feel more connected to the encroached upon animal than I do that of Western society. The kinship I feel for the wild has been within me since I was a child. I spent the summers of my childhood knee-deep in ponds meeting bullfrogs and sun turtles, and my springs and autumns exploring the woodlands around our home. I can’t pinpoint exactly what, but something about the exchange when I encounter an animal in the wild is revelatory. Each time I feel varying depths of awe, and in this awe find peace and belonging.

Looking up, I see Alex climbing through a labyrinth of rocks scattered within the waves. We’ve made it to the fort. As Alex explores the surround, I sit on a cluster of boulders for a time. The hollow iron bell of a buoy clangs in rhythm with the swells in the distance. Stepping from rock to rock, I move deeper out into the water, finally coming to rest on a larger boulder only half submerged in the incoming tide. Looking down at my feet in the cold water I witness a plethora of life. Blue mussels, slipper shells and a fleet of sea snails no bigger than pebbles swarm in the pooling breakwater. A tiny spider crab reaches a claw out from under a nearby rock. A dead one lies only a few inches away. Hopefully not a companion. A garden of barnacles covers the side of each rock. Some are so large the pearl petals of the calcareous plates are clearly visible. I glance back at the mile and a half of beach we’ve covered. As my foot aches, a single thought occurs to me: We still have to walk back. 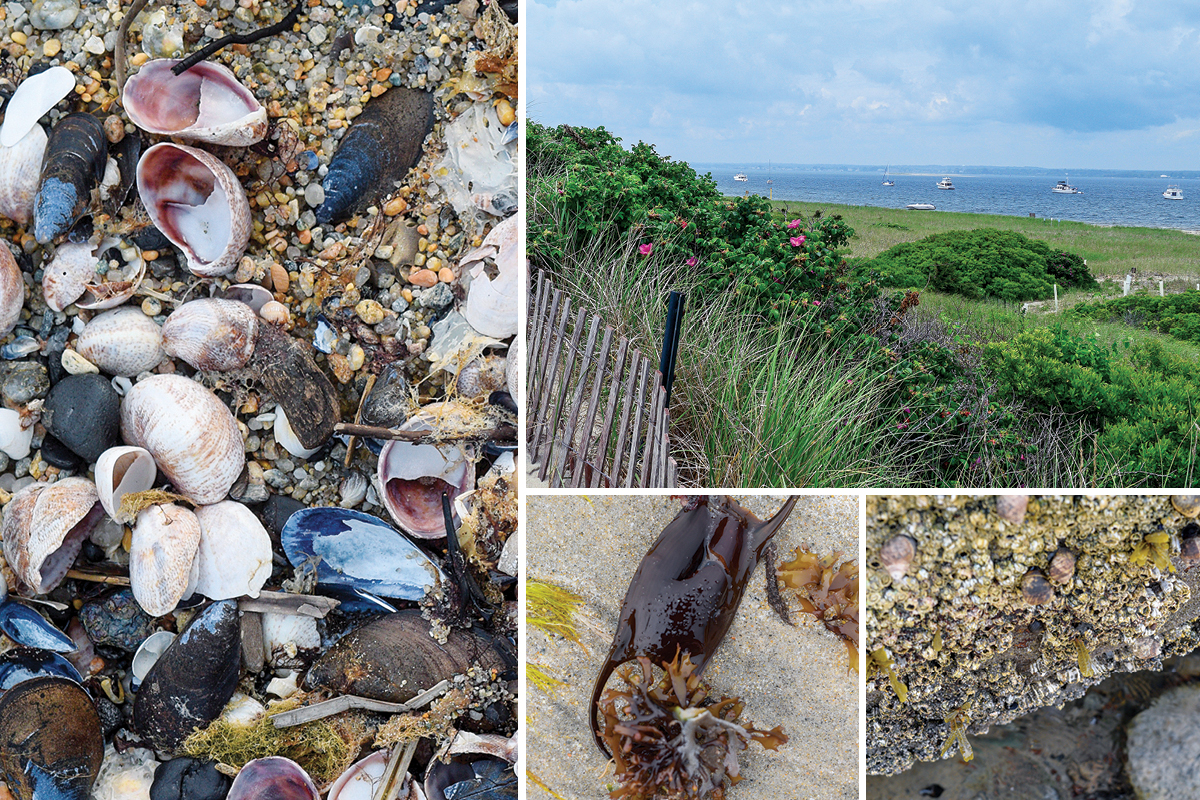 A flood of worry washes over me, but I push it away. That journey will be confronted later. The moment, I remind myself, isn’t for dwelling on the difficulties that lie ahead, but for appreciating the beauty already present.

Isak Dinesen writes, “The cure for anything is salt water: sweat, tears or the sea.” As the snowy spray from the breaking waves kisses my face, this truth resounds. Setting out this morning, my mind was heavy from work and worry, my body weary from illness and injury. Yet the sea, with its consoling balm, has washed that strain away, even if only for a time. In the distance, I hear a scream from a pair of ospreys. A flock of four oystercatchers chatter loudly as they beat their wings across the horizon. Piping plovers scuttle about almost indistinguishable from the dried grass speckling the dunes. The bell sounds. My bare scarred leg soaks in the cold, salty Atlantic. The waves crash upon the ruined battlements of the fort. The wind suddenly shifts, leaving my mind to soak in the stillness.