My Experience Racing Onboard a Volvo Ocean 65 Class Boat

Watch what it was like to be on Team Brunel's boat during yesterday's practice for the Pro-Am race.

Yesterday, I experienced what it was like to be a skipper onboard a Volvo Ocean 65 racing boat during the Volvo Ocean Race. Four journalists were granted spots onboard the Team Brunel boat as the crew battled the six other boats in Newport Harbor just off Fort Adams State Park as part of a practice run for the Pro-Am in-port races.

I start the day thinking I’ll just be sitting there taking beautiful photos of the rainbow-hued boats against the Pell Bridge’s backdrop, but little do I know, I’ll be holding on for dear life and tacking and jibing right along with the team members (lugging all of my photography equipment and notebook proves to be quite a challenge).

On the dock, we board a little RHIB boat (rigid-hulled inflatable boat) and speed to catch up with the $8 million Volvo Ocean 65 racing boat. Along for the ride is a reporter from the Washington Post, a radio personality from Lisbon, Portugal, and a reporter from Seahorse magazine. As we approach, we can see the team members working the sails from a short distance, and soon we catch up with the boat and climb aboard. 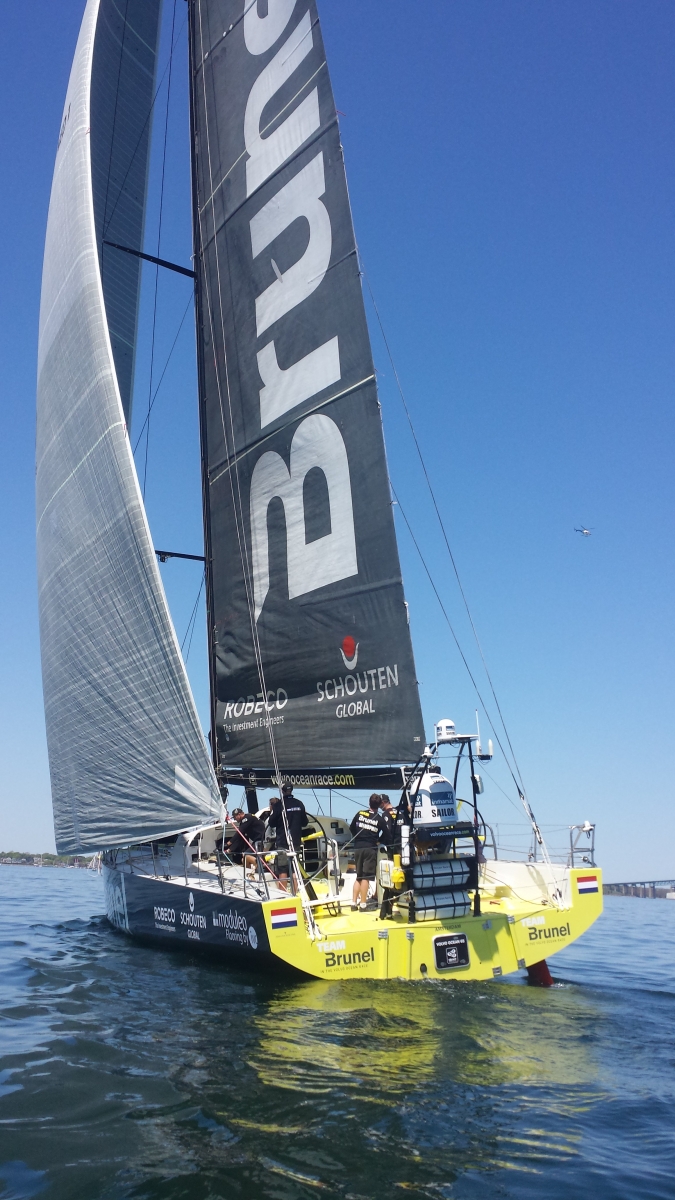 We coast for awhile and chat with the team members. Though Team Brunel is Dutch, the sailors come from all over the world: New Zealand, France, Spain, Amsterdam and other countries. Finally, the winds pick up and a shotgun goes off from a mega-yacht to signal the beginning of the practice race. The situation quickly turns chaotic as the team works the reels and sails to their advantage. 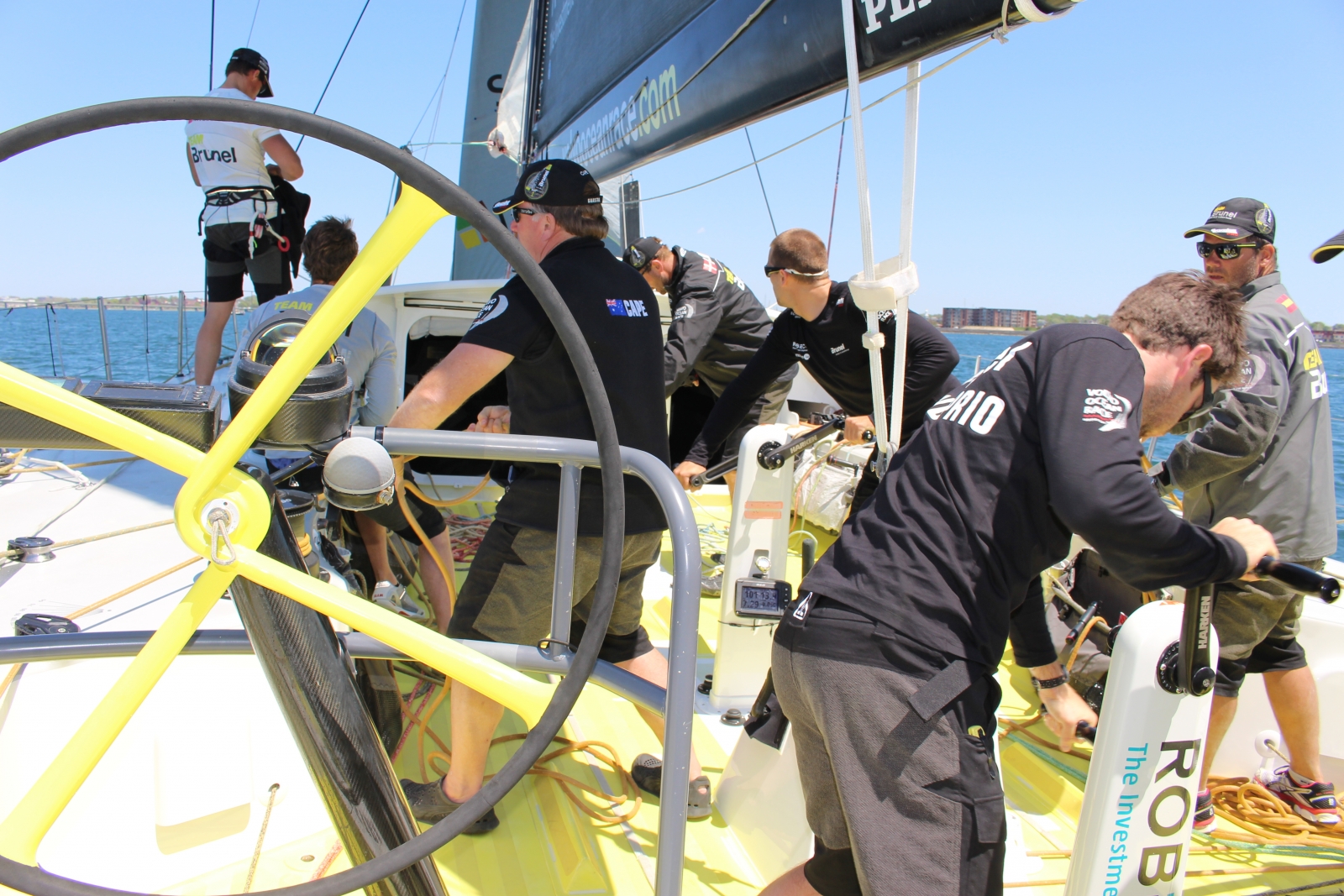 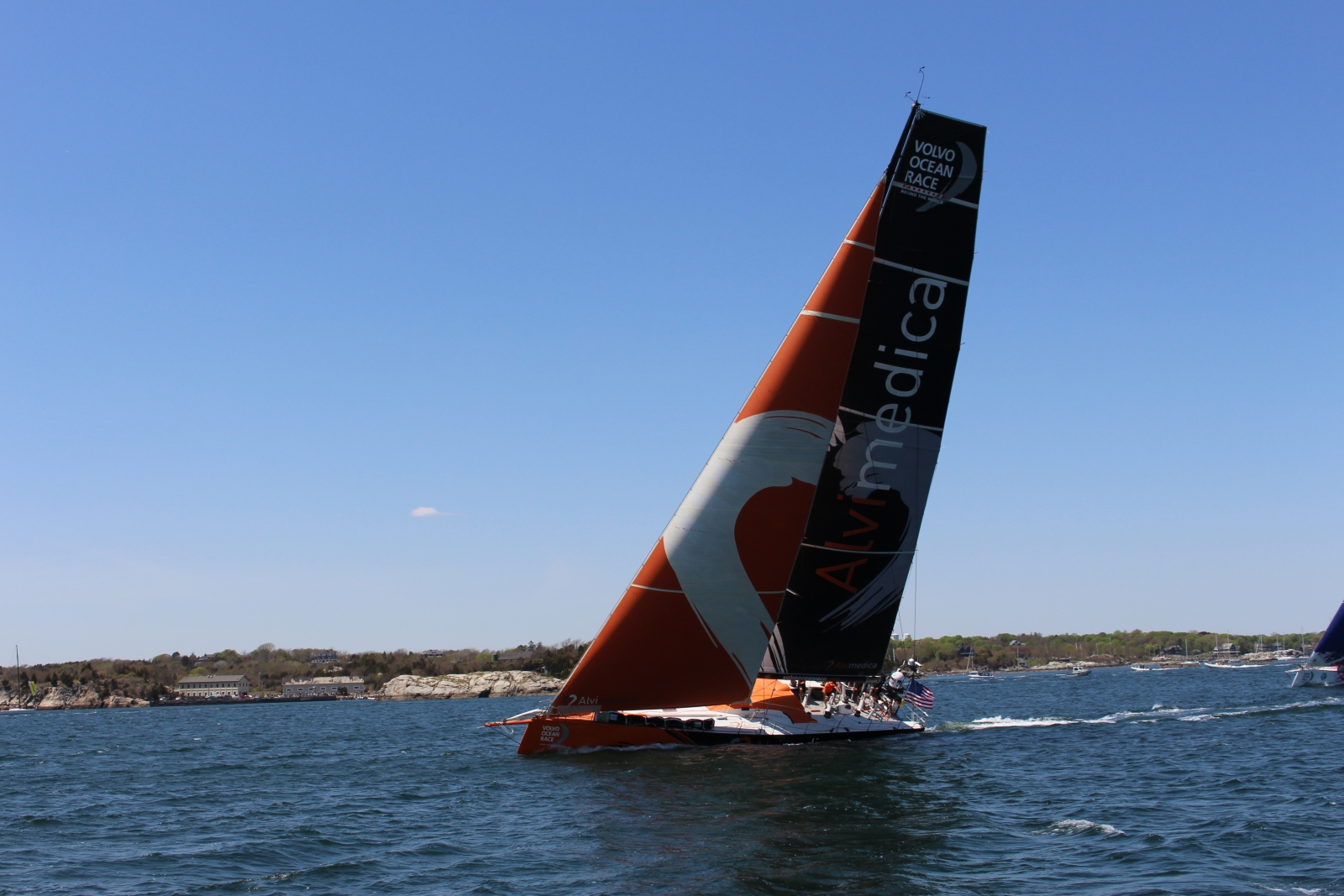 As Team Brunel rounds the markers and swings back around, we tack to the opposite side as the sail flips to the right. The other boats, Team Alvimedica, which is the American team, and team SCA, the all-women’s team, come so close to our boat, we can fist-bump each other as we pass. Toward the end of the race, all the boats are coming in close, swerving and swooping towards us. I feel like I get a real experience being onboard, but of course, it is a short adventure, and nothing compared to tumultuousness these sailors endure in the high seas.

These team members are sailing around the world, and they will spend about nine days (depending on weather and wind conditions) crossing the Atlantic to Lisbon, Portugal, starting on Sunday, when they depart for the next leg of the race. For the Volvo Ocean Race, they can spend up to twenty-seven days at sea with no land in sight. They sleep in four-hour shifts, because someone has to be on watch at all times to look out for bad weather (and pirates!). And, of course, they have to operate the boat. During these long stretches at sea, they don’t have access to fresh food, so they are forced to eat freeze-dried food, which they say is terrible. When they get to the ports, they look forward to eating home-cooked meals with fresh vegetables and fish, and they enjoy home-like settings instead of hotels. Many of Newport’s bed and breakfasts are hosting the various team members during the stopover.

Three days remain at the Newport stopover, and there are plenty of opportunities for guests to watch the boats race from the shore. The village is open from 10 a.m. to 8 p.m. on Friday and Saturday, and from 10 a.m. to 6 p.m. on Sunday — the final day of the event.  The Exploration Zone, a marine interactive exhibit for all ages, is open at the same time. The Race Village and Exploration Zone offer free admission for all visitors.

The final three days feature two more Pro-Am Races Friday (scheduled for 1 p.m.), the Team Vestas Wind In-Port Race Newport on Saturday (scheduled for 2 p.m.) and the Leg Start of the Volvo Ocean Race on Sunday. On Saturday, Zdeno Chára, captain of the NHL's Boston Bruins, will be at the Race Village at 11 a.m. to participate in an event with area youth and Race Village guests by the race boat docks. He will also sail as guest aboard Abu Dhabi Ocean Racing. Make sure you give yourself plenty of extra time to park at Fort Adams, as it is quite a walk from the lot to the Race Village. Parking will be $20 this weekend, but the Village admission is free.

On Sunday, the leg start celebration begins at noon with a parade, cultural demonstrations, music, performances, a dock-out ceremony and blessings of the fleet. The parade will showcase the fleet before its final departure for the transatlantic crossing and next stopover in Lisbon, Portugal. Make sure you get out to Newport for this once-in-a-lifetime opportunity as you really have to see it to understand how incredible it is. Newport is hoping for record-breaking turnout this weekend, so maybe – just maybe – the Volvo Ocean Race will come visit us again!

Here are 8 Ways to Enjoy the Volvo Ocean Race in Newport.

Learn about the Rhode Islanders on Team Alvimedica. 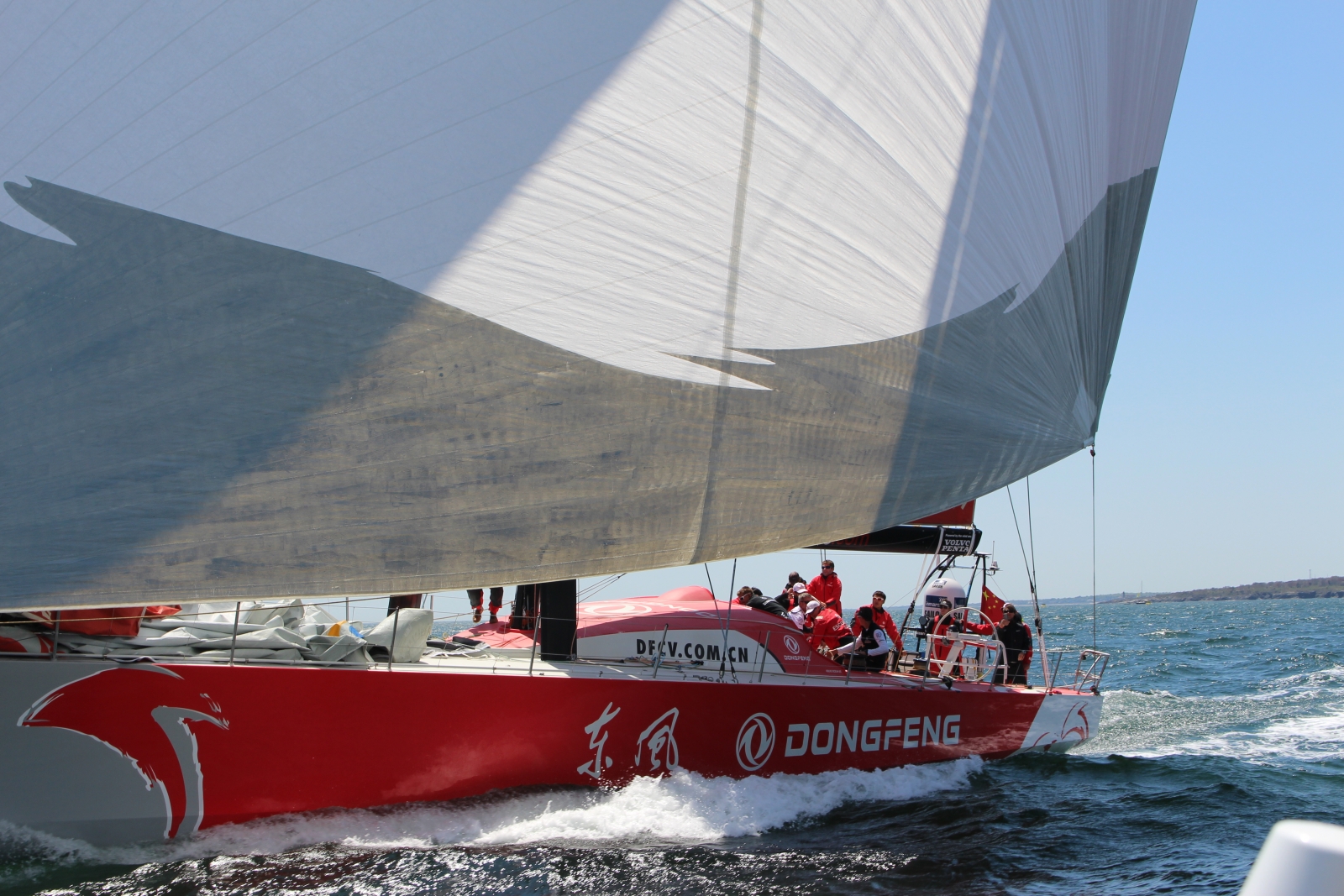 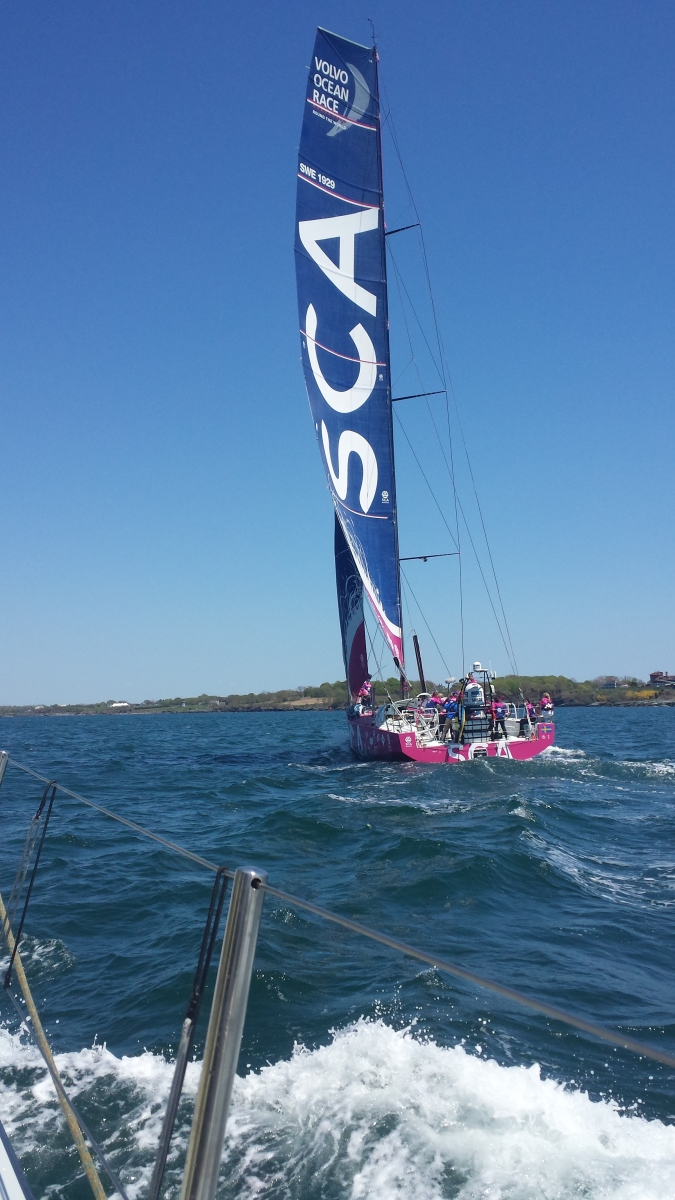