A local scientist spent a year on simulated Mars.

Right after returning last August from a year on simulated Mars, Dr. Sheyna Gifford encountered a new challenge: keeping track of her keys. In a 1,200-square-foot habitat, “everything had its place,” she says.

For one year, Gifford and five crewmates lived atop Mauna Loa volcano in a solar-powered dome as part of the NASA-funded Hawaii Space Exploration Analog and Simulation (HI-SEAS) IV. As the mission’s chief health and safety officer and crew journalist (in addition to earning her master’s in biotechnology from the University of Rhode Island, the Moses Brown grad also holds a doctor of medicine and a master’s in journalism), Gifford’s research included telemedicine, along with keeping crewmates safe and healthy. In an isolated red-rock landscape with limited electricity, water and supplies, it was a daily challenge. 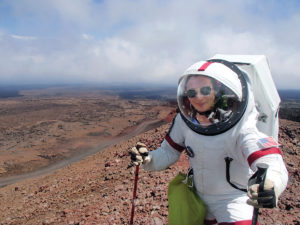 For one year, the crew of six lived in simulated Mars conditions, venturing outside the habitat only in spacesuits, connected to the outside world solely by email operating on a twenty-minute delay. The foresight and effort required even for mundane chores — from collecting shower water for mopping floors, to prepping the starter and culture a day in advance for a simple breakfast of toast and yogurt — shed as much insight on the realities of life on Earth as in outer space. “You would think we could all live quite peacefully in a place where there is temperature control and the lights still work at night,” she says. “But in our society, we seem to find reasons to struggle.”

Some struggles, such as navigating rocky terrain in a fifty-pound EVA (extravehicular activity) suit, are uniquely space-centered. In December, Gifford and HI-SEAS IV chief engineering officer Andrzej Stewart visited the Rhode Island School of Design to test out a suit designed by professor Michael Lye and students in a partnership with NASA and HI-SEAS. Gifford was “chief catalyst” on the project, working with Lye and students to envision a suit that would be more functional and affordable for simulations; the design will be deployed on the HI-SEAS VI mission next year.

Will Gifford, currently a scientist-in-residence at St. Louis Science Center in Missouri, be part of a future mission to actual Mars? For now, she is focused on what we can gain from the very pursuit of a Red Planet mission. “I think the value in learning to master an extreme environment is that we can learn to live a more integrated existence,” says Gifford. “There are things Mars can offer us, but we also have to ask, what can we offer it?”