How to tell your Crespone from you Capocollo 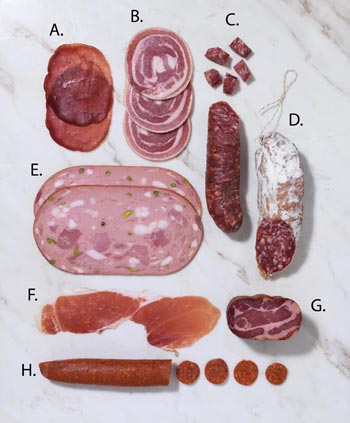 A. Bresaola
Citterio, Italy
Air-cured salted beef round that is aged about two or three months until it becomes purple in color. Rich, lean and tender.

B. Pancetta
Mestro San Daniele, Canada
Unlike American bacon that comes from the sides and belly, this Italian-style bacon is made just from the pork belly and is salt-cured, not smoked.

D. Crespone
Columbus Salame Company, California
A traditional salami from the Brianza region in northern Italy. Made from a coarse paste seasoned with pepper, garlic and wine.

E. Prosciutella
Levoni, Italy
Mortadella (often called bologna because it originated in Bologne) with bits of prosciutto and pistachios. Meaty and flavorful.

H. Pepperoni
Margherita, U.S.A.
Made from pork and beef sausage and seasoned with red and black pepper,
this is an American version of dry, spicy Italian salamis.