The spirit of the Boston Marathon is something that brings joy to so many people around the world, but especially to runners like Jamie who have completed this bucket-list worthy event.

Today is the 122nd Boston Marathon, the day where roughly thirty-thousand runners take part in the oldest annual marathon; They begin in Hopkinton and race for 26.2 miles towards the finish line on Boylston Street in the Back Bay. Rhode Island Monthly associate editor, Jamie Coelho, ran through eight different cities and towns and was a 2012 finisher. She completed the marathon in just over four and a half hours. 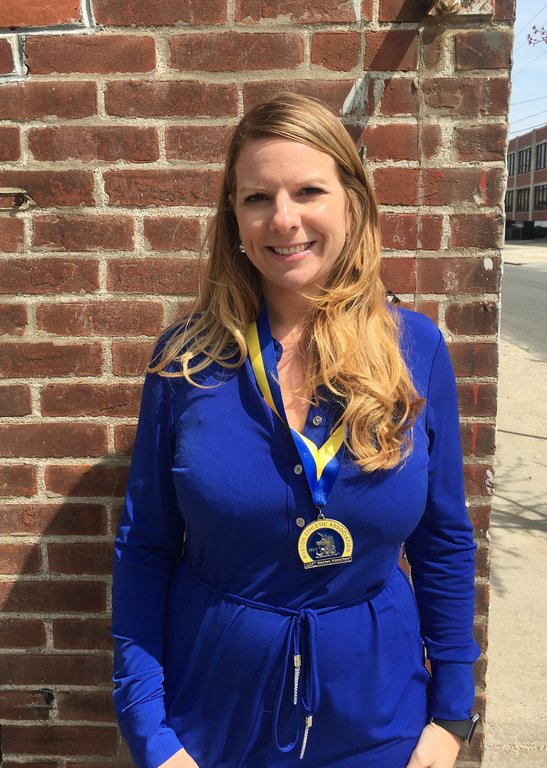 Jamie with her medal from six years ago.

I sat down with Jamie to chat about her favorite memories from the Boston Marathon and how the sense of accomplishment and boost of euphoria when crossing the iconic blue and yellow finish line will stay with her forever. The spirit of the Boston Marathon is something that brings joy to so many people around the world, but especially to the runners like Jamie who have completed this bucket-list worthy event.

I always ran for fun and for fitness but had never run in a competitive way. Running was my passion pre-kids and I would love to get back into doing it more. As for marathons, I liked running them because you are competing against yourself and only improving yourself. I am my own competition and it is my personal goal to improve every time I run a race. For me, running is therapeutic too. When I go for runs on the weekends, I suddenly feel at ease and feel like I can conquer the world. It is a feeling like you are accomplishing something. 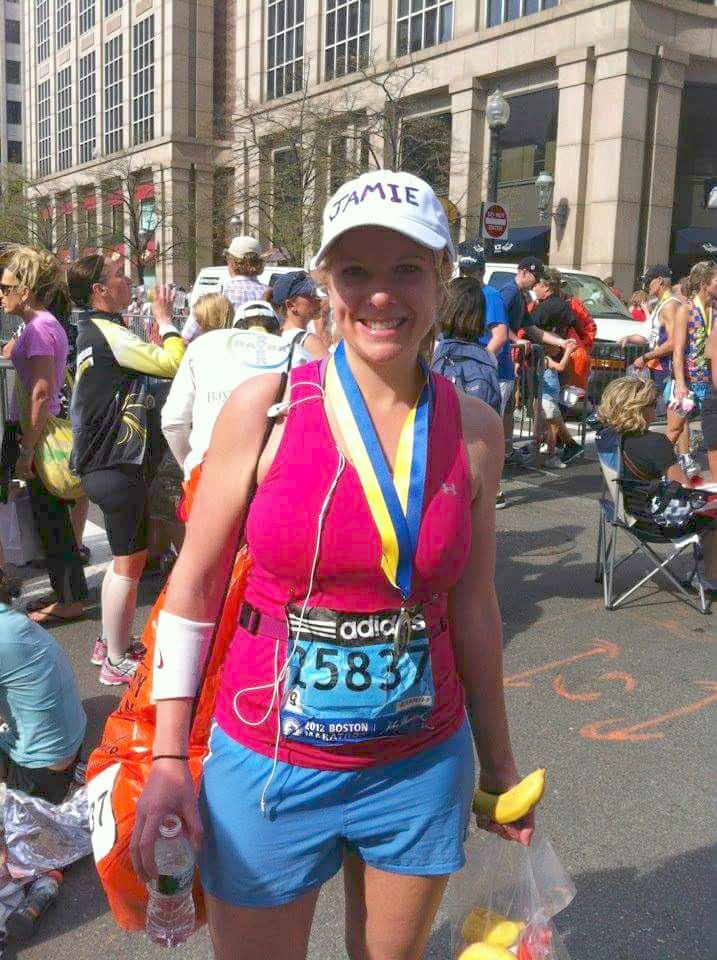 Why did you decide to run the Boston Marathon?

It was a bucket list type of moment and was something I wanted to do before I had children. So, I embarked on the training and did it. But it was also part of a fun challenge at my previous workplace. Everyone knew how much I loved to run and my co-workers challenged me to run a marathon. I wanted to prove that I could do it and just being challenged helped to set the goal. Anybody can truly do it as long as they follow a training program and don’t have any injuries. You can train your lungs and breathing to be able to handle it.

How long did you train for the marathon? What was that process like?

I referenced a book by Hal Higdon, Marathon: The Ultimate Training Guide, which had an eighteen-week training program that I followed. I looked at the calendar and mapped the race out and counted backwards to see how many weeks I needed to train for it. The book gives you a training program on a weekly basis and you eventually build up to twenty miles, which is the furthest you will run up until you compete in the actual race. I would go on runs about four or five times a week, each and every week. I had also run a marathon before the Boston Marathon, so my body was in pretty good shape at that point, as I was already at a level where I could run ten miles.

Do you have a favorite memory while training for the marathon?

My favorite memory while training for the race was running with one of my best friends who was also running the marathon for a different charity. Her charity team got together every Saturday or Sunday to practice on the marathon route, so I was able to go out there and run with their group too. There were also people out on the route during training weekends who handed out orange slices and water so you didn’t have to carry it yourself. I went up there to run with them as much as I could that way I had someone to talk to during those sixteen and twenty mile runs. My favorite part of that was just being able to train with her. Oh, and going out to brunch and eating whatever we wanted to!

What was marathon day like? Too hot, too cold or just right?

Race day had record-breaking heat at a high of eighty-eight degrees. I got an email that they were allowing runners to defer until the next year if they wanted to, because of the heat, but I thought about how I already trained for it and didn’t want to take a chance of not being able to run it the next year. So, I just took my time with it. I took every sip of water I needed, ran through every hose that came my way and just took it slow and steady. It never crossed my mind to defer, but to think if I did and waited until the next year… I know that there were people who did and got caught up in the mayhem the following year. It is a weird thing to think about. But it never crossed my mind to put it off. 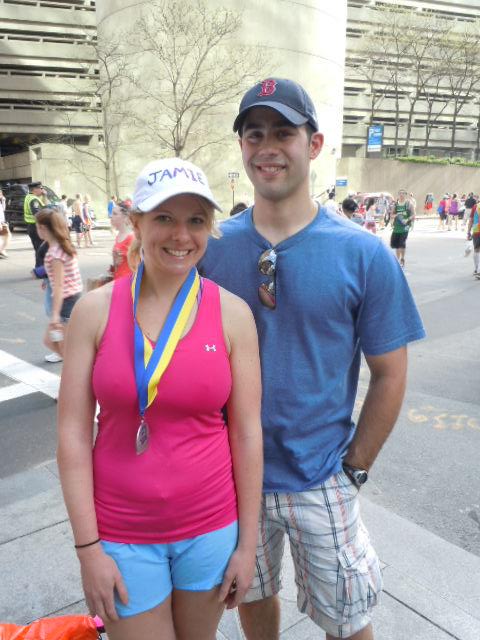 Was there any point in the race when you thought you couldn’t do it? Do the spectators help make a difference?

I wore a hat with my name on it so that when I was running, the crowds cheered me on. I could hear them yelling my name which was really motivating. I also knew about this thing with Wellesley College, where if you submit your name to them in advance, they would make you a sign. When I got to that area on the marathon route, it was fun to look for the sign they made me, and I sure did see it. My family was also staggered throughout the route, so they could give me cold towels and words of motivation. My husband was about a mile before the finish line too. It was all just so motivating and everyone around you really carries you. It is unlike anything you have ever experienced before. I have done long runs by myself that have felt really desperate, but this race is different. There is no hesitation that you can get it done because even up until the end, there are people high-fiving you. I had a lot of fun with it, took my time and wanted to just enjoy the whole experience.

How did it feel when you finally crossed the finish line and what were your emotions when receiving your medal?

I was really happy and it is something that I will always remember. Although my family and husband could not make it to the finish line in time, there were so many strangers surrounding me, supporting me. We were cheering each other on, getting each other water and taking pictures. Later on, I was able to meet up with my group and that’s when it felt like a total sense of accomplishment. Obviously, you are really tired too, but it is just such a great feeling.

What it Feels like to be a Boston Marathon 2012 Finisher

Training for the Boston Marathon on Heartbreak Hill