The Manton Avenue Project Teaches Kids to Tell Their Own Stories

The non-profit after-school program is based in Providence's Olneyville neighborhood.

When the playwrights and their dramaturges reconvene to share their drafts, Anthony and Jourdan go first. Jourdan reads the script from the top and, when he’s halfway through Eggo’s Spanish-language monologue, Sullivan gasps.

Then Eliana’s dramaturge, Joanne Fayan, reads her story about a park bench who’s separated from her family. Makaila’s involves a family separation, too.

“That was really striking to me — the numbers of families that were separated,” Sullivan says later. “That was something that came up more this year than ever before. We don’t ever ask about anyone’s immigration status, but there’s got to be a real fear. I know there is, from talking to my students.”

Sullivan says the storylines, in general, involve reconciliation, reaching across differences and problem-solving. They display a child’s innate sense of empathy. Patterns sometimes crop up, and playwrights often use their home lives as source material.

“The plays on the big stages don’t often reflect the lives and voices of people of color, of immigrants, of Latinos, of kids,” Sullivan says. “To talk about the issues in their communities through the mouths of characters — it’s a safer place. You have the floor, people will be listening, so what is it that you want to talk about?”

She’s played twins separated at birth, a recycling superhero named Rainbow Girl, the queen of a chess board, a taco and a unicorn (twice). Emily Lewis, a stage actor who performs at 2nd Story Theatre in Warren, has volunteered with the Manton Avenue Project for years.

“The first time I did a show was the most fun I’ve ever had in theater,” says Lewis, who now works as MAP’s manager of programs. “It makes you braver as an actor. Who writes a part for a taco? Some of the kids write very, very funny stuff.”

Today, at the Saturday afternoon performance of the Yes Farms, Yes Food: Farm-to-Table Plays, Lewis is a stinkbug. She’s stinky, but worthy of love. And the audience wants to pay attention to her, we do.

But it’s not easy when third-grader Wesly, the mastermind behind The Stinky Hero, Sort Of, is seated onstage at an old school desk marked “Playwright.” He’s wearing a visor that says “Stinky’s” across the rim, and he’s getting a kick out of his play.

He howls at his own punch lines. He looks back at MAP friend, Anthony, and points to the stage when a character named after him — an ant — makes a cameo. He claps to Pharrell Williams’s “Happy” when his characters take a dance break. This is Wesly, joy incarnate.

Other playwrights are harder to read, but their personalities are revealed in their shows. Cristal, in a flowery pink and purple headband, a jean jacket and a geometric print dress, is reserved behind the desk. She watches intently as her characters — a bird and a rocking chair — hatch a brilliant plan to manufacture the sound of rain. Their ploy triggers worms to come to the surface of a garden. The play features a musical number — with support from audience members with kazoos — written by Cristal. 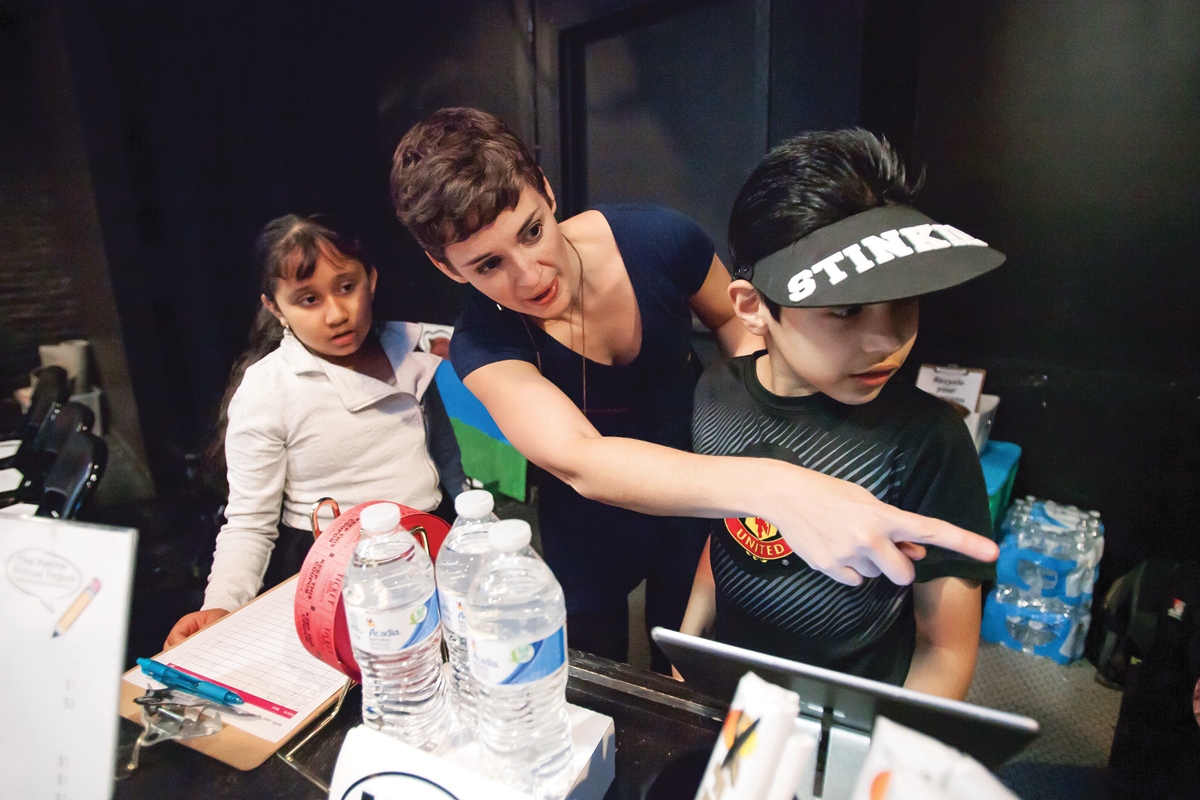 Her characters are explosions of femininity. Miss Birdy, played by Nicole Cooney, struts her stuff in bright orange pants, a yellow feathered jacket and a downy crown. Miss Lulu, the rocking chair, played by Lynne Collinson, wears a green top and pink bottom, per the playwright’s vision, with a pink tutu for good measure.

“For me, as an actor who works with plays by Arthur Miller, running around pretending to be a rocking chair was so fun,” says Collinson, who retired last year from her post as executive director of 2nd Story Theatre. “But the experience wasn’t about me. The experience from top to toe was about the young playwrights.”

Collinson and Cristal met for the first time at New Urban Arts during Playwriting Weekend. They played theater games — think: “Kitty Wants a Corner,” a little like “Duck, Duck, Goose,” but with more improvisation and stealthy spot-switching — and the playwrights interviewed their actors.

Collinson and the other actors committed a week and a half to the shows, including three rehearsals.

“I loved how the playwright sat onstage. I loved watching how they watched their plays. Some were so intent; it was very joyful to watch,” she says. “What I took away from it was how valuable it was to see their idea go through a process and see it become a work of art. It’s a positive experience they’ll remember for their whole life.”

With some students, though, it’s hard to measure their level of enjoyment. Of the introverted Eliana, Sullivan says, “I was so nervous: Does she like it, is she hating it? I couldn’t read her.”

From her seat on the stage, the already tiny Eliana shrinks in the limelight. She keeps her hands on her cheeks and watches over her glasses with her chin tucked down, her feet swinging beneath the desk.

Eliana’s play follows a curmudgeonly cookie-loving ladybug named Alison and a bench named Ms. Messi, whose family was taken away. Despite Ms. Messi’s tragedy, she’s a ray of light in Alison’s life. She has a positive outlook, and she helps her friend make healthier food choices. Alison eventually learns to love strawberries and carrots.

As all good shows should, Eliana’s play ends in a dance party. The audience joins in, moving and clapping from their seats.

It also ends with a smile. A brief one, as the playwright scans the crowd of theatergoers who appreciate the moral of her story and her musical selection. But a smile, nonetheless.

A few days later, at an impromptu class at the clubhouse, Sullivan gets another one from Eliana, and nine more from her classmates.

Sullivan told her third-graders: Class is officially over after the plays are over.

“But I figured, with this group, that it hadn’t registered,” Sullivan says.

So after school on Tuesday, she walks over to D’Abate, just in case. They’re all here, ready for class.

The group heads over to the clubhouse to debrief about their performances and play theater games. Then, Sullivan breaks the news again: Class is over.

They ask if they’ll ever be able to write plays again, opening up the door for Sullivan to deliver her favorite line of all time: “Once you’re in Manton Avenue, you’re always in Manton Avenue.”

Sullivan lays it out for the young playwrights: They’re invited to Fun Fridays every week throughout the school year. In early winter, they’ll write their Peace Plays. They’ll start all over again in fifth grade, then join the middle school group, then the teen group. They can be part of the MAP family forever, if they want to be.

The playwrights glow like little spotlights, each and every one of them.

In early winter, see Eliana, Wesly, Anthony and their fellow playwrights tackle the Peace Plays, with guidance from Trinity Repertory Company’s Joe Wilson Jr. and the Institute for the Study and Practice of Nonviolence. Shows are free. Visit mantonavenueproject.org for more information.