The Manton Avenue Project Teaches Kids to Tell Their Own Stories

The non-profit after-school program is based in Providence's Olneyville neighborhood. 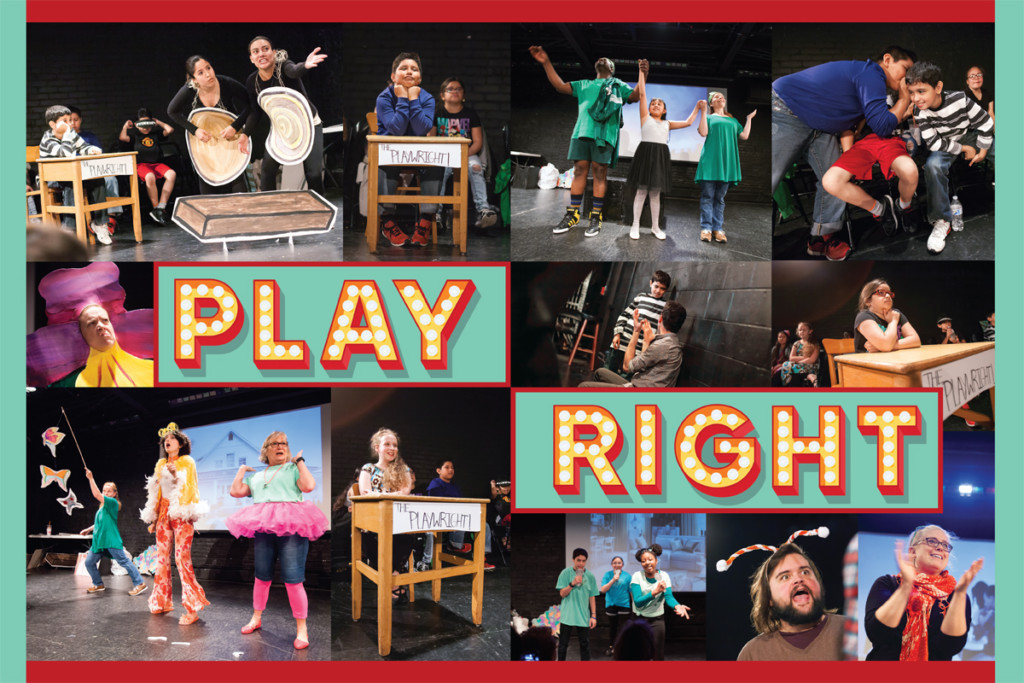 It’s a bitterly cold day in March, all bite and bluster, but Hope Artiste Village in Pawtucket is warm. And it smells like cake.

A group of eight-and nine-year-olds — about ten in total — ace the sniff test. “Cupcakes!” a few shriek, drawing out a long “a” in unison.

But the children, from Providence’s Olneyville neighborhood, will eat neither cake nor cupcake. By the end of the hour, they’ll taste purple carrots and pea greens and spicy radishes fitted neatly into Dixie cups.

They’re visiting the headquarters of Farm Fresh RI, a nonprofit program that bolsters the state’s food growers with culinary incubators, farmers markets and other programs. The field trip thrills them to the point of total-body stimulation — read: They can’t stand still.

“Can I get a high five?” their instructor, Meg Sullivan, asks. One by one, the students raise their hands to the ceiling and settle their eyes on Sullivan, who introduces them to Sarah Bernstein from Farm Fresh RI.

“How do we show respect?” Sullivan continues.

Bernstein shuttles them through Farm Fresh’s headquarters and into massive walk-in coolers set at 55 and 36 degrees. Here, milk and cheese are stored before delivery in the organization’s Market Mobile wholesale food distribution system.

Bernstein says several local grocers sell these products, which all hail from local farms. One girl, Cristal, wonders if her neighborhood grocery store, Price Rite, carries them. No, Bernstein tells her, not Price Rite. Other shops, though.

Bernstein passes out a scavenger hunt sheet with prompts to find the smelliest thing, the most beautiful thing, and something they’ve never seen before. Several students collide and careen off in opposite directions.

“Miss, what’s this?” an earnest, doe-eyed boy named Anthony asks the nearest adult. The white root vegetables were stacked in an unmarked bag.

Later, when the group reconvenes, Bernstein goes over some scavenger hunt answers. Stinkiest thing? Goat cheese from Narragansett Creamery, for sure, but also dried chili peppers. Most beautiful thing? The purple viola mix, which Bernstein says is an edible flower. For the thing they’ve never seen before, Anthony shoots up his hand.

“Parsnips,” he proudly declares, then points to the adult who helped him out. Thankfully — a learning experience for all — he’s right.

Sullivan then asks the question of the day: “What did you see that could be a character in a play?”

These third graders are playwrights, after all. They’re here for inspiration.

Beginning in third grade, students from William D’Abate Elementary School in Olneyville, one of Providence’s lowest-income neighborhoods, work with MAP volunteers to write original plays on a specific theme, from farm-fresh food to outer space to Olneyville itself. Once the plays are complete, professional actors from Rhode Island’s theater community stage them in a four-show run.

“Third grade is such a good time,” says MAP’s artistic director, Meg Sullivan, who took over for Peek in 2011. “They’re still young enough that they want to play and their imaginations are so incredible, but they’re also getting old enough to really want to focus in on a project. And they’re not afraid of being silly.”

When Sullivan took the MAP helm, classes were held once a week at D’Abate Elementary off Manton Avenue. The program served third through fifth graders — ten playwrights per grade, with each class writing plays once a year — with an additional summer program for older students.

“I’d see the kids once a week for two hours, six to eight weeks each year, and I wouldn’t see them again until the next year when it was their turn to write their next play,” Sullivan says. “It was a long space between. But we didn’t have the capacity to do more than that.”

Everything changed in 2013, when developer Olneyville Housing completed work on Olney Village, a smattering of renovated affordable housing units and community spaces throughout the neighborhood. A ground-level storefront, which sits across the street from D’Abate, was offered to the Manton Avenue Project rent-free for use as a clubhouse.

“It’s a huge part of our survival and our growth,” says Sullivan, adding that MAP, which operates on a $100,000 a year budget, makes ends meet with an amalgamation of grants and charitable donations. The program receives an annual legislative grant as well as support from the United Way, the Rhode Island Foundation, the Rhode Island State Council on the Arts and more than 100 individual donors. 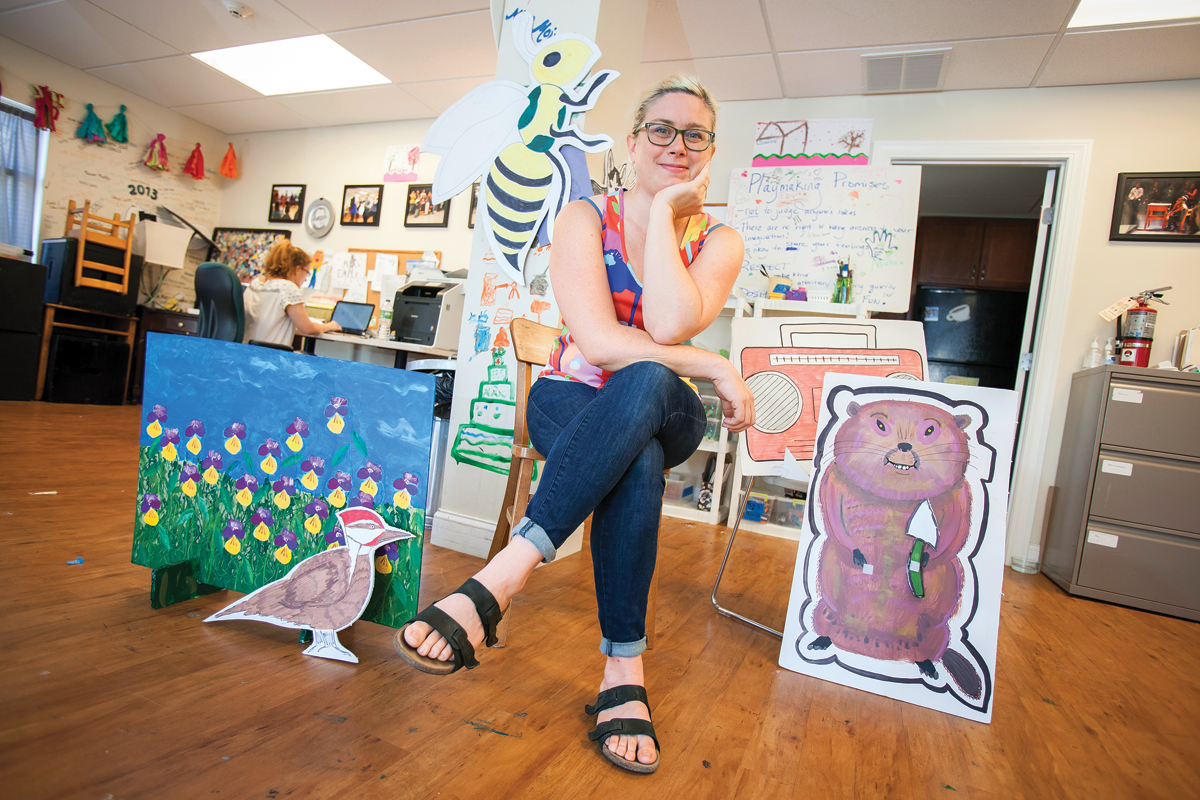 MAP’s artistic director, Meg Sullivan, sits in the nonprofit’s clubhouse off Manton Avenue in Olneyville. In addition to her work at MAP, Sullivan performs in local theater. Photography by Ryan T. Conaty.

Sullivan’s family also contributes. Earlier this year, her father died after a long illness. To honor his life, Sullivan’s mom set up a fund in his name to provide stipends for older students who stage-manage and run the light and sound booths for the younger kids’ shows.

Since the clubhouse’s ribbon cutting, MAP grew its playwriting sessions from one day to two days per week and introduced three new programs. Fun Fridays brings in guest artists — from songwriters to yoga teachers — to lead workshops with MAP students; Teen Voices Tuesdays serves high schoolers; and, new this year, Middle School Mondays bridges the gap between the elementary and teen programs.

“Last year, I was seeing a lot of anxiety coming up when the kids were getting ready to graduate fifth grade,” Sullivan says. “In Providence, they all go to different middle schools. They’re huge schools all across the city and they don’t know where they’re going until very late in the year. It’s terrifying.”

Sullivan sat down with the fifth grade class and asked: What can we do to help?

“They said to me: ‘Can we have an afternoon of our own?’ And I said, ‘Absolutely, if that’s what you need,’ ” Sullivan says.

On the first day of class, Sullivan and instructor Jenny Sanchez — a Rhode Island College graduate who went to school at D’Abate Elementary — asked the group what Middle School Mondays would mean for them. They compiled a list: They wanted to write plays, continue to bond with each other, perform at community events and mentor younger playwrights.

“It was the most amazing thing because it was totally student-driven,” Sullivan says. “I didn’t know how we would pay for it but I said, ‘We’re going to do it, because it’s what you need.’ ”

What MAP’s third-grade class needs today, another dreary spring day after school, is a snack.

The group rallies around pretzels, crinkling bags of Pirate’s Booty and oranges before High/Low/How, a check-in game where they share the best and worst parts of their days, as well as how they’re feeling. Afterwards, they’ll practice writing dialogues, stage directions and character outlines.

The small, colorful clubhouse is decorated with art made by MAP students, past and present. Within sight is the third-grade class’s Playmaking Promises board, which features rules in blue marker, including “Not to judge anyone’s ideas” and “It’s okay to share your feelings.”

“My first high is that I got four stars on the ‘Daddy’ song in Just Dance for the whole school,” Cristal says energetically. “My other high is that it’s going to be my stepdad’s birthday.”
“Do you have any lows?” prompts Sullivan.

“Oh, yeah. That my friend got in the corner. Our teacher puts us in the corner if we’re not paying attention. Does it look like we’re babies? We’re not babies!”

“And how are you feeling?”

Before Cristal gets her last word out, her circle neighbor, Eliana, recounts her High/Low/How in an almost inaudible stream of consciousness: “My high is that I’m here, I don’t have a low and I’m feeling good.”

A tiny girl with long dark hair and black glasses with red inlays, Eliana is creative. She signs her name with a little box over the “I.” But she’s also very shy, which is why Carmen Rodriguez, a third-grade teacher at D’Abate, nominated her for the Manton Avenue Project. MAP adds a class of ten new third-graders every year. Siblings, and sometimes cousins, get first dibs on the available slots. Others are selected by Rodriguez and her colleagues at D’Abate, who give their names to Sullivan.

“From the get-go, I’ve chosen children who can benefit the most from the environment,”says Rodriguez, who has taught for twenty-seven years and served as a MAP board member.

The students in her classroom at D’Abate, including Eliana, are all bilingual and they’ve been together as a group since kindergarten. On their first day of third grade, Rodriguez’s students told her: “Oh, Eliana — she doesn’t talk.”

“That’s how bad it was,” Rodriguez says. “She’s not a weak student, but she’d gotten used to everyone talking for her. I knew something like MAP was needed out of the classroom structure for her where she wasn’t being graded.”

Some MAP students struggle with reading or writing or they require speech or occupational therapy. Other students are at the top of their class academically, but need a safe place to go after school. And others still, like Makaila, have a lot of creative energy and just need an outlet.

“She comes up with so many ideas; this is her all the way,” says Makaila’s mom, Pamela Reis. “Makaila’s always go, go, go; she’s always talking. But she comes home to work on her play, just sitting there, thinking and writing, for two to three hours. For her to stop everything and focus — that’s amazing for her to do.”

Reis says the family lived close to D’Abate but has since moved to a different neighborhood in Providence. With only one car and a husband who works in Massachusetts, Reis wondered how she would be able to pick Makaila up at the clubhouse at 5:30 p.m. two nights a week.

“Thankfully, Miss Meg knew the situation and said she could work with us. Every other week, she would bring Makaila home,” says Reis, who stays at home with Makaila’s infant brother. “Even if she couldn’t work with us, I knew I had to do it, even if I had to bus all the way there at night with the little guy. Makaila needed this.”

Makaila and her peers at D’Abate receive one hour of arts instruction per week: a half-hour for visual art and a half-hour for music. Long-standing teachers at the elementary school recall years with double the classroom time, a dedicated art room and full-time teachers on staff.

Research shows that students perform better in core subjects when they’re involved in the arts, particularly if they’re from low-income neighborhoods. According to a longitudinal study published in 2012 by the National Endowment for the Arts, low-income students who have a history of in-depth arts instruction earned better grades in science, math and writing — and were three times more likely to earn a bachelor’s degree — than their peers with less arts exposure.