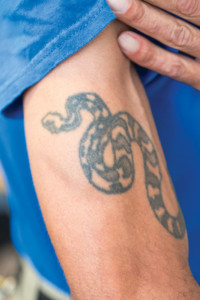 Back in Rhode Island, he uses a different strategy for rearing the American burying beetle, the official state insect of the Ocean State, which has disappeared from 90 percent of its range; its lone population in the eastern portion of its historic range is on Block Island. The thumb-sized, black-and-orange insect eats only small vertebrate carrion, and they only reproduce after burying an appropriately sized dead animal approximately two feet deep as food for its young.

So Perrotti, who sports a burying beetle tattoo on his arm, created a beetle room in a zoo storage and maintenance building on a dead-end road about a mile from Roger Williams Park. The room contains fifteen three-gallon buckets filled to the brim with soil, on which he places a dead rat or quail and two burying beetles. Within twenty-four hours, the beetles bury the carcass, and within a week they have laid their eggs and prepared the carcass to be fed to their larvae when they hatch. Six weeks later, the young beetles emerge from the soil as adults, and three weeks after that they are ready to reproduce.

The project has been so successful that about 3,000 burying beetles raised at the zoo were released on Nantucket between 1994 and 2006 to establish a new population in case a disease or other catastrophe wipes out the Block Island beetles. It’s a project of which Perrotti is especially proud.

“It’s a federally endangered insect, and Block Island has the only extant population, which, to me, is cool,” he says, noting that the burying beetle was the first insect in the world to have a species survival plan developed through the Association of Zoos and Aquariums. “To be able to expand its range is important to me, even if we just create an insurance policy for those on Block Island. We owe it to the beetle to do something.”

Not far from the rattle- snake room, in a small building that formerly held animals used in the zoo’s education programs, Perrotti oversees the captive rearing of another rare species native to Rhode Island, the New England cottontail. Two walls of the building are lined with eighteen wire cages stacked three high, each lined with hay and holding a single adult cottontail — except for one, which houses five baby cottontails recently weaned from their mother. Most of the animals are awaiting the February-to-August breeding season, when select pairs will be placed in outdoor pens for three days, during which time they will mate and then be returned inside to give birth.

The New England cottontail is the only native cottontail rabbit in the Northeast, but habitat loss, hunting, and especially competition from the introduced Eastern cottontail has pushed them to the brink of extinction. A multi-state effort to restore their population centers on DNA studies at the University of Rhode Island and captive rearing of the animals at Roger Williams Park Zoo and the Queens Zoo in New York.

“We had to write the book about how to rear this rabbit in captivity,” he says. “There were no established husbandry practices for them. We didn’t know how stressed out they would be or if they would eat. So we looked at their natural history and tried to replicate it as much as we could.”

Starting with just six rabbits collected from a population in Connecticut, Perrotti and his team kept them quarantined for a month while feeding them rabbit chow, apples, dandelion greens and other natural foods they collected around the zoo property. When they finally paired up the animals for breeding for the first time, they were immediately met with success: Every female became pregnant and raised her kits to weaning age. The program has grown every year since, with about 140 captive-born cottontails raised since 2012.

“All of our short-term goals have been met,” Perrotti explains. “We’ve built a hardening pen at Ninigret National Wildlife Refuge with predator-proof fencing so they can learn to be wild rabbits. We created an island population at Patience Island in Narragansett Bay to establish it as a breeding colony. And for the last two years we’ve pulled rabbits from Patience and released them in New Hampshire. This year we’re releasing some in Maine, too.”

Fish and Wildlife Service biologist Cindy Corsair, who transports the rabbits from the zoo to Ninigret and Patience Island, has observed Perrotti’s approach to the captive rearing of cottontails and burying beetles, and she considers him as a mentor. “Lou thinks outside the box about what might be affecting the success of the program,” she says. “He’s very willing to try a variety of different solutions. It was his idea to vary the temperature in the building where we keep the rabbits to try to mimic wild conditions as much as possible and trigger their breeding period. And it worked.

“He’s very intuitive in how he goes about things, and that comes from being so intent on studying the animals he has in captivity,” Corsair adds. “He’s guided by his experience and his passion and everything he’s learned over the years of being in the middle of it all.”

Perrotti, who famed chimpanzee expert Jane Goodall calls a conservation hero, says that his objective at the zoo is “to contribute to the conservation of species in the wild and the wild places they live.” One part of his job that gets little attention, however, is his role in educating Rhode Islanders about native species. He says he enjoys sharing his knowledge and passion for wildlife with others, especially children, through a wide variety of shows, lectures and events.

At the Rhode Island Natural History Survey’s annual BioBlitz, where 200 naturalists spend twenty-four hours on one property searching for and identifying as many species of wildlife as possible, Perrotti leads the reptile and amphibian team. Joined by a dozen enthusiastic volunteers, he wanders through fields and forests turning over rocks and logs, and he always seems to find more creatures than anyone else. Especially snakes.

“Lou could find a snake in an empty room,” says David Gregg, who organizes the event. “He intuits what would be a good place for a snake to go, and he looks in those places. And he’s not all wound up about whether it’s going to bite him. He has a perspective on grabbing stuff that most of us don’t have.”

“I don’t mind getting bitten,” acknowledges Perrotti, who calculates that he has probably been bitten a thousand times by non-venomous snakes but never by a venomous one. “I hardly notice it anymore. It’s almost a badge of honor. If you handle a lot of snakes, you’re going to get bit.”

At the end of the day, though, he says the bites and mortalities and obstacles to protecting rare species are worth it.

“What’s not to like about this work?” he asks. “I have the support of an amazing institution, I get to work with species many people never get to work with, and I’ll be able to say I contributed to keeping the planet as good, if not better, than I left it. I don’t want anyone to ask why I didn’t do anything to protect these species. I’m in a position to protect species for the quality of life and the quality of nature for the next generation. That’s why I do it.”