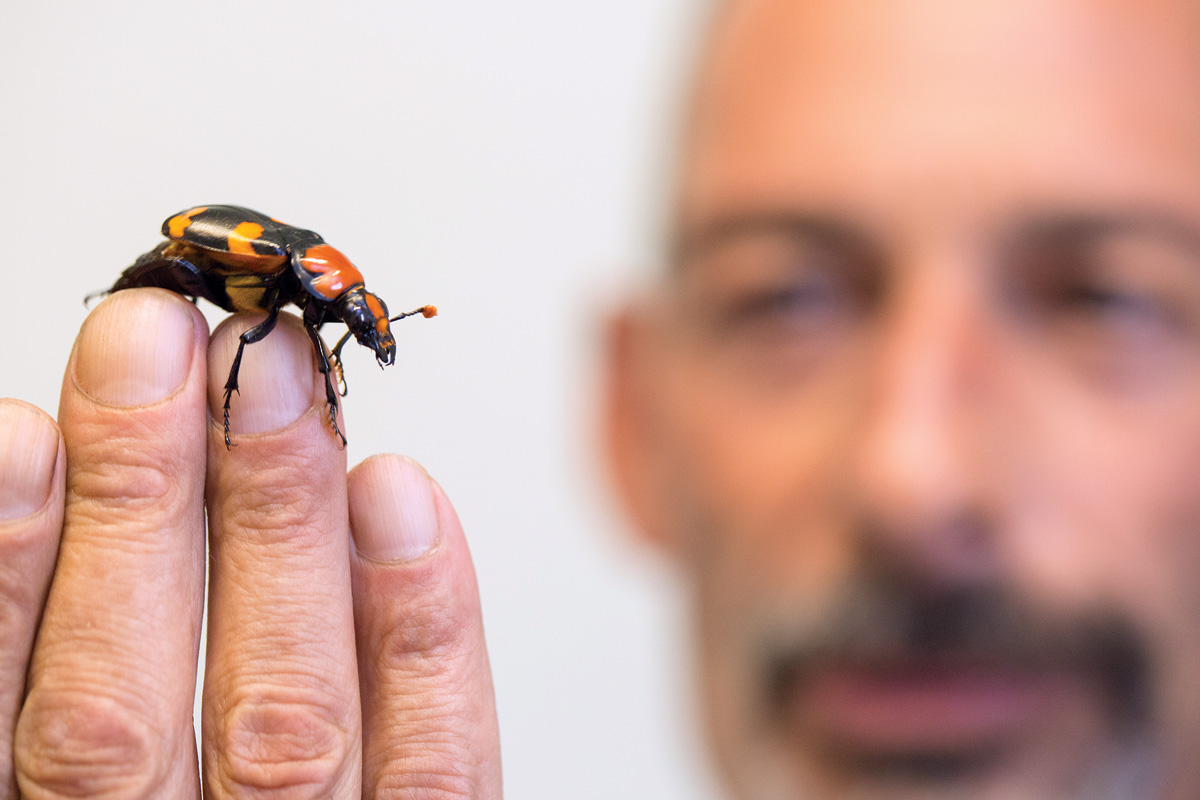 Later, a visitor brought a boa constrictor to Perrotti’s school classroom, and it inspired him to follow in the man’s footsteps. “I wanted to be that guy,” he says. It didn’t take long before he achieved that objective.

With his family’s support, he obtained his first boa constrictor at age eleven, and a year later he was breeding them. “Breeding was mostly by trial and error, reading books, talking to others,” he says. “I had some mentors who kept snakes, but mostly it just came naturally for me. It’s all about knowing an animal and giving it what it needs.

“To this day I still get excited by snakes. You can’t build something as perfect as a snake: legless, colorful, great diversity, from giants down to tiny ones, venomous ones. I’m still fascinated by them.”

By the time he got to high school, he was known throughout the state as “the snake guy” for the free educational programs he offered at libraries, schools and birthday parties. Soon after graduation, he helped start the Rhode Island Herpetological Association to bring together like-minded people with whom to trade the animals they raised. And his reputation resulted in local police departments and the Department of Environmental Management (DEM) asking for his assistance when they discovered pet snakes left behind in residences.

His reputation paid off when he applied for a job as a zookeeper at Roger Williams Park Zoo and DEM officials gave him a strong recommendation. For nine years beginning in 1997, Perrotti cared for penguins, flamingos and a variety of South American creatures, including snakes and other reptiles. It also gave him his first introduction to wildlife conservation, a career direction he found more and more appealing.

But when the job of conservation director opened up at the zoo, he found he was woefully underqualified. The position required a doctorate, yet Perrotti had never attended college. He applied for the job anyway.

“I felt I had nothing to lose,” he says. “I knew they thought highly of me, I told them I would never let them down and I would give them 150 percent every day. And I got the job.”

Jeremy Goodman, the zoo’s executive director, says that Perrotti’s lack of a college education was never a concern to him. “His life experience and on-the-job training and passion overcome any Ph.D. I’ve seen,” Goodman says. “He might not have the academic credentials, but he knows his stuff. And he has a craving to want to know more and be better all the time. That’s irreplaceable.”

Goodman says that Perrotti’s passion “oozes out of every pore. I’ve been around a lot of environmentalists and conservationists, but I don’t think I’ve ever seen someone with that sheer passion,” he says.

While it would be easy to assume that Perrotti is most comfortable among snakes and other wildlife, Goodman says that Perrotti is also a master at collaborating with others in the conservation community.

“He’s a connector. He’s the type of person who will see what other people see as abstract points and find ways to connect them and make something better out of it,” Goodman says. “He uses his position at the zoo to make things happen between government entities, private individuals, land trusts and other not-for-profits. He brings everybody together so the whole can function so much higher than each individual entity.”

That’s not to say that he doesn’t occasionally make a misstep. Goodman recalls a day last year when Perrotti put his foot in his boot without realizing a black widow spider was inside, and the spider bit him.

“His foot swelled up incredibly, and it was incredibly painful,” Goodman says. “It was something that would cause the average person to miss days or weeks of work. But for Lou, he was back at work the same day doing what he had to get done. His attitude is that the animals rely on him. He was probably more concerned about the spider than about his foot.”

Perrotti’s ability to figure out how to successfully raise unusual animals in captivity and get them to reproduce was tested in 2008, the International Year of the Frog, when zoo officials encouraged him to find out how to support amphibian conservation without bringing tropical frogs to Providence. He knew that more than two-thirds of amphibians around the world are at risk from a fungal disease called chytrid, which has caused the disappearance of an untold number of species. So Perrotti went to Panama to see how he could help.

Since chytrid can be cured in animals brought into captivity, a group of conservationists was capturing thousands of frogs of twenty different species, housing them in hotel rooms and treating them for the disease. Because the frogs eat a varied diet of insects, the conservationists had crickets and fruit flies shipped from the United States, but most of the insects died while waiting in customs. They also attempted to catch local insects, but that took up too much of their time. When Perrotti suggested that they breed local insects to feed to the frogs, they asked him to show them how.

“Something like that had never been done to complement an amphibian rescue effort before,” Perrotti says. “But it was a cutting-edge project, and I love nobody’s-done-it-before things. So I went down, looked at what they were catching, identified the bugs to species, came up with the husbandry and caging they needed to keep them alive, and tried to get them to reproduce in a sustainable way. And we did that.”

The project has become a model for amphibian conservation efforts around the world, and Perrotti now serves as a consultant on rearing insects in Africa and the Dominican Republic. This year he is partnering with the San Antonio Zoo on a similar project designed to protect frogs native to Chile.