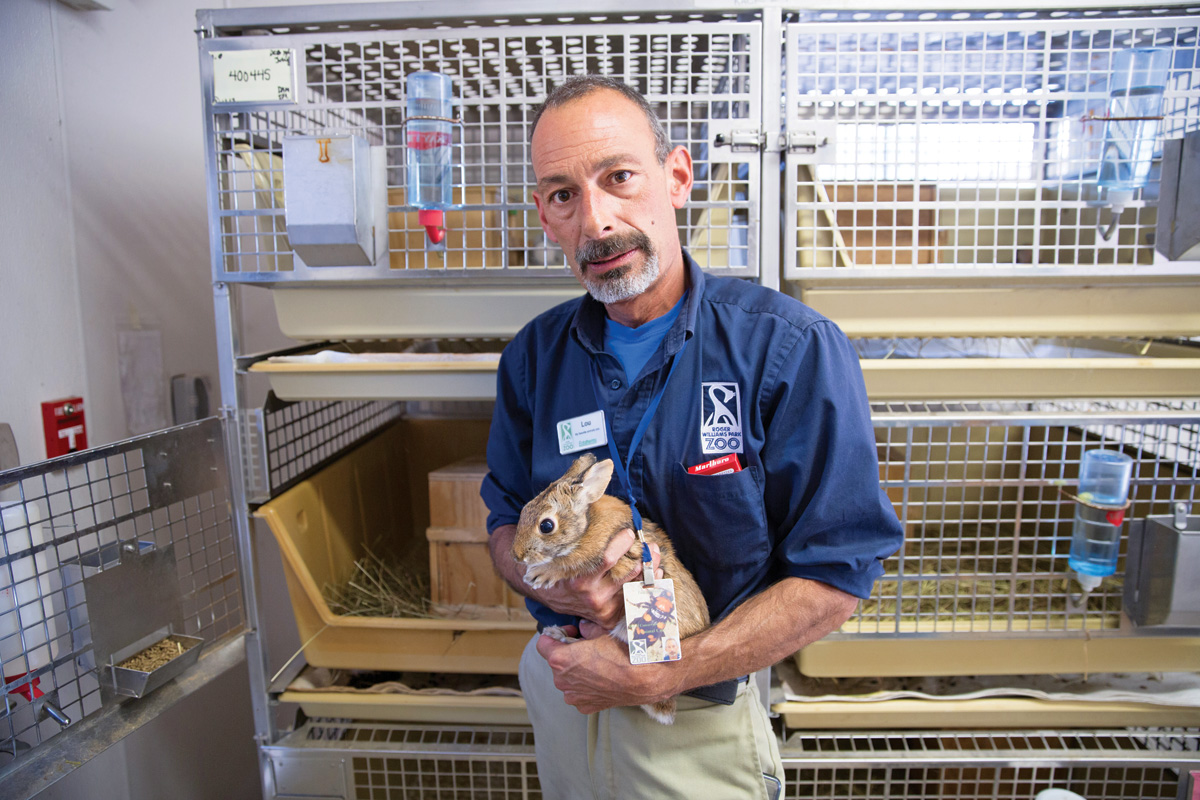 In a concrete block cellar of the building that houses the moon bears and snow leopards at Roger Williams Park Zoo is a brightly lit room. Unrecognized visitors are welcomed by the clatter produced by some of the sixteen Eastern timber rattlesnakes that reside here. Heated to 82 degrees, the room is lined with large, clear plastic cages along two walls, each containing an adult rattlesnake about four feet in length, two of which are believed to be pregnant. A vertical rack containing twelve plastic tubs stands against a third wall, each home to a juvenile rattler less than half the length of the adults.

The snakes are unexpectedly attractive and strikingly patterned, some colored in yellows and browns while others are dressed in smoky gray and white. One adult male displays a yellow triangular head with chocolate brown chevrons along the length of his golden back, which blends into a velvety black tail that doesn’t stop rattling during the entire fifteen-minute visit.

Lou Perrotti, fifty-three, director of conservation at the zoo and an expert snake handler since his junior high school days, says the rattlesnakes are usually silent when their regular zookeepers attend them. “But new faces get the full treatment,” he adds.

The subterranean room is a captive rearing center for New England’s only native rattlesnake, an endangered species that disappeared from Rhode Island in the 1960s and whose few remaining colonies in the Northeast are declining precipitously due to habitat loss and poaching. A newly discovered fungal disease that causes skin lesions and blisters on their faces is contributing to the high mortality rate.

When Perrotti heard about the disease, he recruited the veterinarians at the zoo to study how prevalent it was in New England; they found it everywhere they surveyed. So he partnered with the Massachusetts division of the U.S. Fish and Wildlife Service to launch a captive breeding effort. By taking rattlesnakes from healthy populations and breeding them at the zoo so their offspring can be released into the wild, Perrotti and his colleagues are augmenting snake populations that are barely sustaining themselves.

“And then we decided that creating a new population would be awesome,” he says. Biologists identified a small island in the Quabbin Reservoir in central Massachusetts as the ideal location. “We thought the site was brilliant. It has plenty of habitat, plenty of food, it’s off limits to humans. It just made sense to create a secure population there.”

It didn’t turn out that way. When the public got wind of the plan, their vocal objections — which Perrotti says were based on little more than fear and speculation — quickly scuttled the project.

“We were doing what we thought was the best thing to keep this endangered animal on the planet,” Perrotti says. “We can’t only protect the cute and cuddly animals. They all deserve to be protected. This project was going to become a model for the conservation of non-charismatic species. The zoo has an international reputation for doing that.”

That reputation is due largely to Perrotti’s efforts. While the zoo is justifiably proud of the large charismatic animals it exhibits, from elephants and cheetahs to giraffes and wolves, it has earned acclaim for its conservation efforts on behalf of rare and endangered species that don’t necessarily lure in visitors. For instance, Perrotti raised New England’s rarest butterfly, the tiny Karner blue, to restore populations in the Pine Barrens of New Hampshire. He’s done the same thing for one of the most endangered beetles in North America and for a threatened rabbit, and he’s beginning a similar project to conserve a rare toad.

“Lou can rear anything: caterpillars, beetles, monitor lizards, tarantulas, frogs, lungfish,” says David Gregg, executive director of the Rhode Island Natural History Survey, on whose board Perrotti serves. “He doesn’t sit around and wonder how to do stuff, he just tries something. He’s very practical and hands-on. He doesn’t overthink it. He just does it, and he does it successfully.”

A resident of Hope Valley and a drummer in a local rock band, Perrotti grew up watching “Wild Kingdom” on television and reading National Geographic magazine. The turning point in his wildlife education came when his family moved from Providence to West Greenwich as he entered the second grade.

“It was like moving to the jungle,” he remembers. “I explored every inch of that yard. I remember being crouched behind a rock one day and I got a feeling I wasn’t alone. I looked down, and curled up in the sun was a beautiful adult garter snake. That was my first wild snake, and I immediately grabbed it.”