Behind the Lizzie Borden House Revamp

A local upholsterer gave the furniture in the legendary B and B a total makeover. 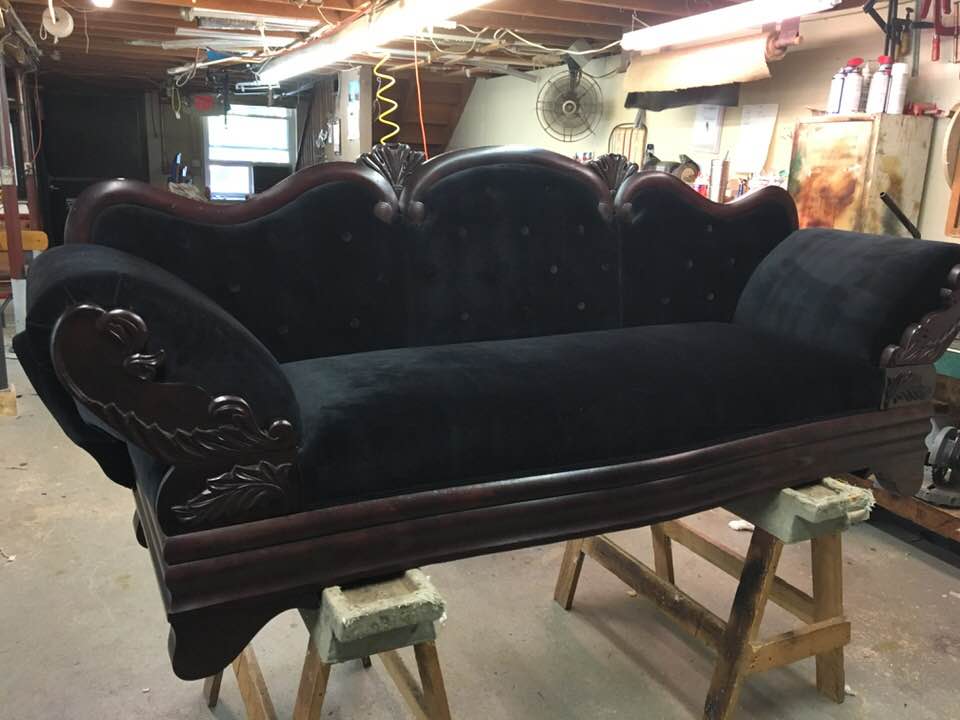 An of Frances’s restoration of the “Death Sofa.”

Alan Frances took an axe and gave the sofa forty whacks. When he saw what he had done, he gave the armchair forty-one.

Okay, okay: He didn’t use an axe and he was exceptionally gentle. But Frances, a third-generation upholsterer, did a number on the furniture from the legendary Lizzie Borden House in Fall River, Massachusetts, where Andrew and Abby Borden were murdered on August 4, 1892. Their adult daughter, Lizzie, was the only person brought to trial in the murders but she was acquitted. The home now operates as a bed and breakfast and museum.

“The furniture there is 130 to 140 years old, so they’ve probably been upholstered three or four times over the course of their lives,” says Frances, who owns and operates Bob Frances Interiors in North Providence. “The person who upholstered them the last time didn’t bother taking off the fabric, which is a huge no-no in the upholstery business.”

Frances’s firm was recommended to the museum for its expertise in vintage and antique furniture restoration.

“It was kind of odd because when I first got there, there was really a mismatch of different patterns and fabrics,” Frances says of the museum, which is owned and operated by Lee-ann Wilber and Donald Woods. The pair recently purchased Maplecroft, where Lizzie Borden and her sister, Emma, lived until their dying days. It, like the Lizzie Borden House, is rumored to be haunted.

The textile overload was true to the Borden household, Frances says. Andrew Borden owned a furniture store and, although the family was wealthy, he often brought home sofas and chairs that he couldn’t sell in his store.

In about a year’s time, Frances restored twenty-five pieces in total for the museum. The pieces are all reproductions gathered by Wilber and Woods over time; Lizzie Borden’s furniture was destroyed in a storage fire when she first moved out of the fourteen-room Victorian at 92 Second Street in Fall River. But the crown jewel of the place — the “Death Sofa,” as Frances calls it, where Andrew Borden was murdered — is an astonishing double for the real thing.

“You look at the picture and the original, and it looks like the same sofa,” says Frances, who also restored woodwork on the sofa and other furniture. “[Lee-ann] got lucky because after 100 years, how do you replace a piece like that?”

Here’s a peek at some of Frances’s transformations, now on display and in use at the Lizzie Borden House:

For more information on Bob Frances Interiors, visit bobfrances.com. To book a room or take a tour at the Lizzie Borden House, visit lizzie-borden.com.