Find out what it was like to eat clam cakes at eleven clam shacks all in one day. 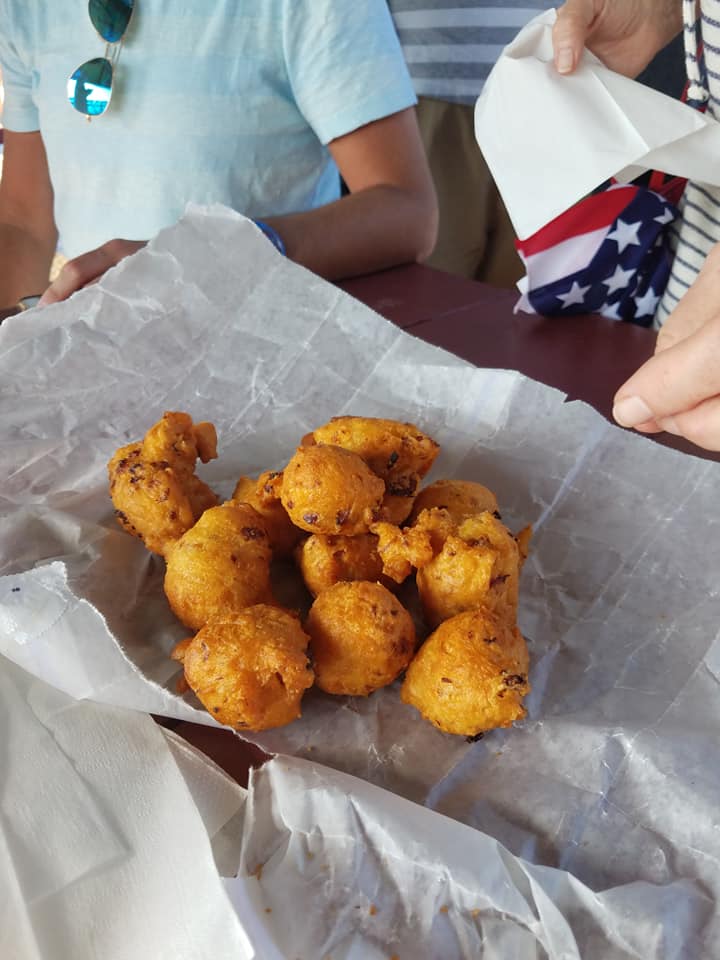 I had the pleasure of visiting eleven clam shacks in one day thanks to the Lil Rhody Clam Cake Crawl. I’ve written about the event for a few years now from the perspective of the ambitious organizers, but this year, I got to join the clamarati for their fifth annual adventure. The journey began with a trio, including clam cake queen Renee Bessette, and friends Joe Mecca and Carol Caulfield Mecca, who first began their clam-critiquing expedition together back in 2014. They’ve picked up more fritter fans from year to year to join them on their epic Rhody road trip.

I will be writing a more in-depth feature about the Clam Cake Crawl experience for next year’s summer issue of the magazine, but for now, I want to share a little bit about the trial of eating at eleven clam shacks in one day. Hint: I ate clam cakes for breakfast, lunch and dinner, and for snacks in between meals. I was not deterred by lobster rolls, or fish and chips or french fries. It was clam cakes all day, for ten hours.

Some people might say clam cakes are all the same, so how can you judge the best? I can assure you that after sampling eleven versions across the state, all in one day, that they are all very different. Some are perfectly round scooped balls while others are blobs with little protrusions sticking out, which are lovingly called “nubbins” by the clamarati. Some have clam chunks, clam specks or clam slices, some have no clams at all, and some use fresh quahogs versus canned clams. Some restaurants add bacon or freshly cracked black pepper, and others use housemade recipes or boxed flour mix for the dough. Some are crisp on the outside and fluffy on the inside. Some are greasy and soggy. Some are served piping hot. Some are lukewarm. Take a look at the photos below so you can see how different they look from one another, and they taste different too. I’ll tell you who won at the end.

How did we do it? We had a group of twelve or more that traveled from place to place in a caravan of cars. We’d stop at each clam shack and order a dozen cakes. Each person was in charge of “buying a round,” that way we got to sample each place on the cheap. A dozen clam cakes is a lot for one person to eat, but not when you spread it out over ten hours, And, I didn’t eat a whole clam cake at every single place. If it was a really good one, I’d eat the whole thing, but if it wasn’t absolutely clamtastic, I only took a bite or two. I battled the belly bloat with lots of water and a Del’s lemonade (and maybe a Del’s Shandy, too), provided by a fellow clam cake crawler.

We marked up score cards after sampling each location (judging crispness, tenderosity, flavor, nubbins, clam-to-cake ratio, clambiance and dining experience), and then the scores were added up amongst the group to determine the winner. We kept ourselves going for ten hours of travel by making each other laugh with clam puns all day. I guess you could say it was a day filled with clamaraderie.

Here are the places we visited on this Clam Cake Crawl. The group visits different clam shacks every year to spread the love. 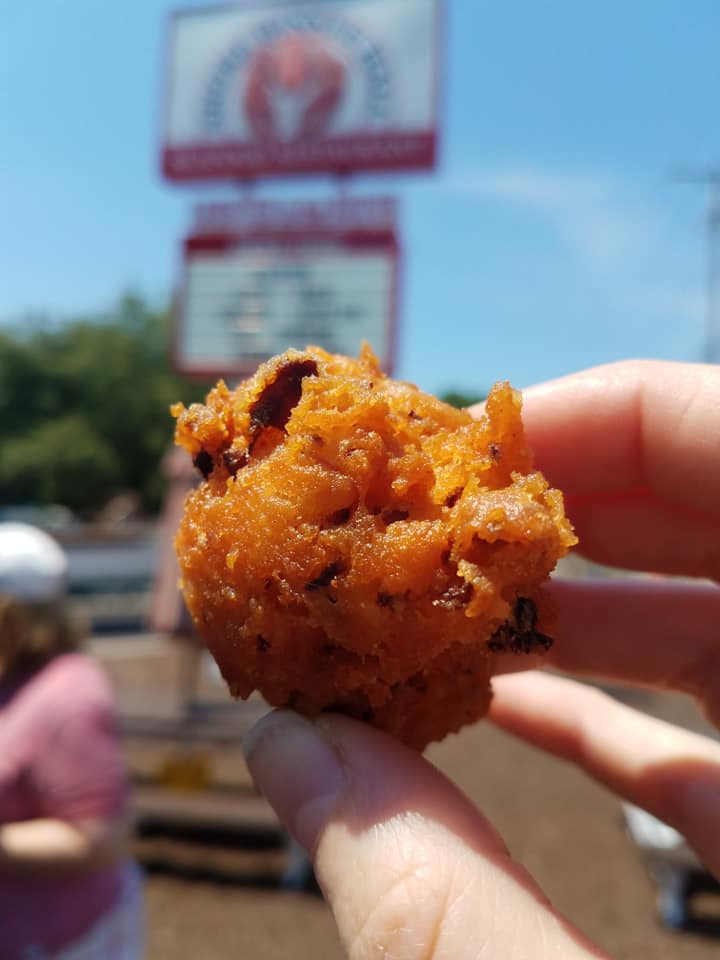 A clam cake at Shore Dinner Hall is round and crisp, and it has little bits of crunchy clam on the outside that have a salty flavor from frying. They use Canadian clams, which have a reddish color. The atmosphere pays homage to Rocky Point with lots of fun props and nautical decor. There’s a pirate ship out back for kids to climb on and tons of outdoor picnic tables for seating. 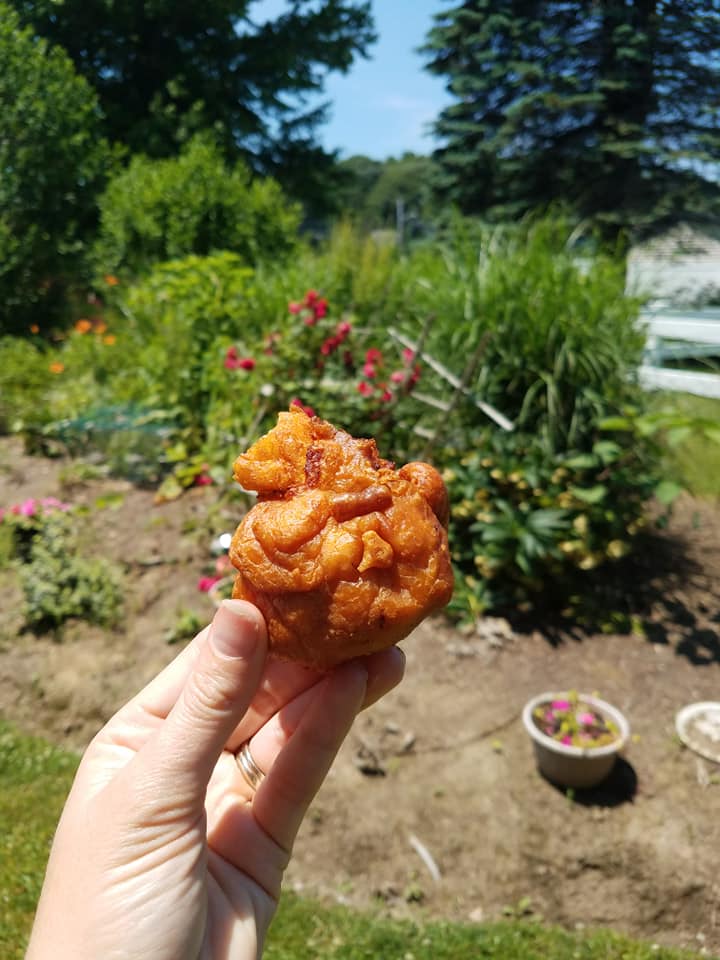 The Hitching Post was last year’s Lil Rhody Clam Cake Crawl winner, and it serves up giant, fluffy, tender clam cakes that are little pillows of dough with clams inside. The clam shack has a beautiful garden with lots of flowers in bloom and shaded areas for picnic tables. 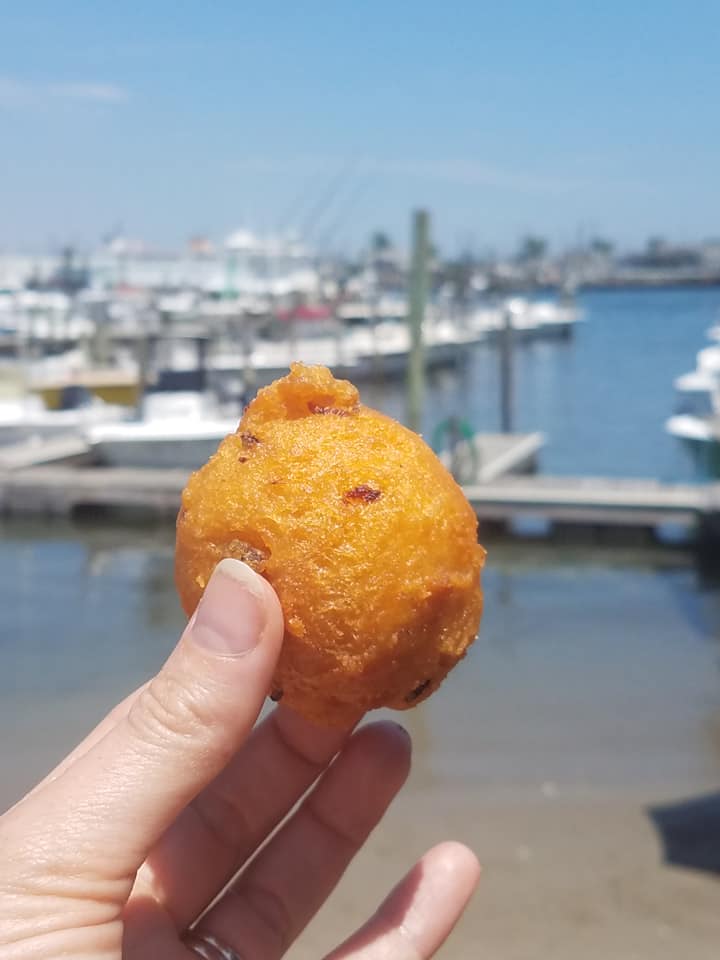 The waterfront view at Jim’s was stellar, but the clam cakes were a bit too round (without many nubbins), and we wondered why the clams had a pinkish color to them. 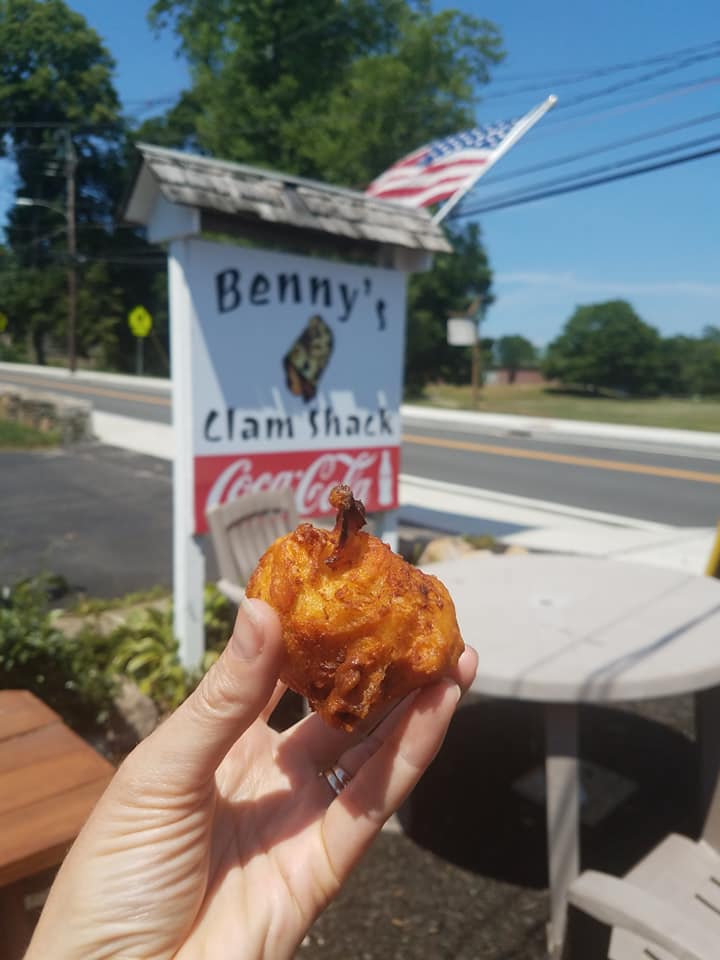 These clam cakes from newbie clam shack Benny’s (P.S. love the name!) were excellent and filled with clams. Mine had a giant clam foot sticking out of the top. They are not cutting corners here. The atmosphere is unremarkable, but they certainly serve some great seafood at affordable prices. 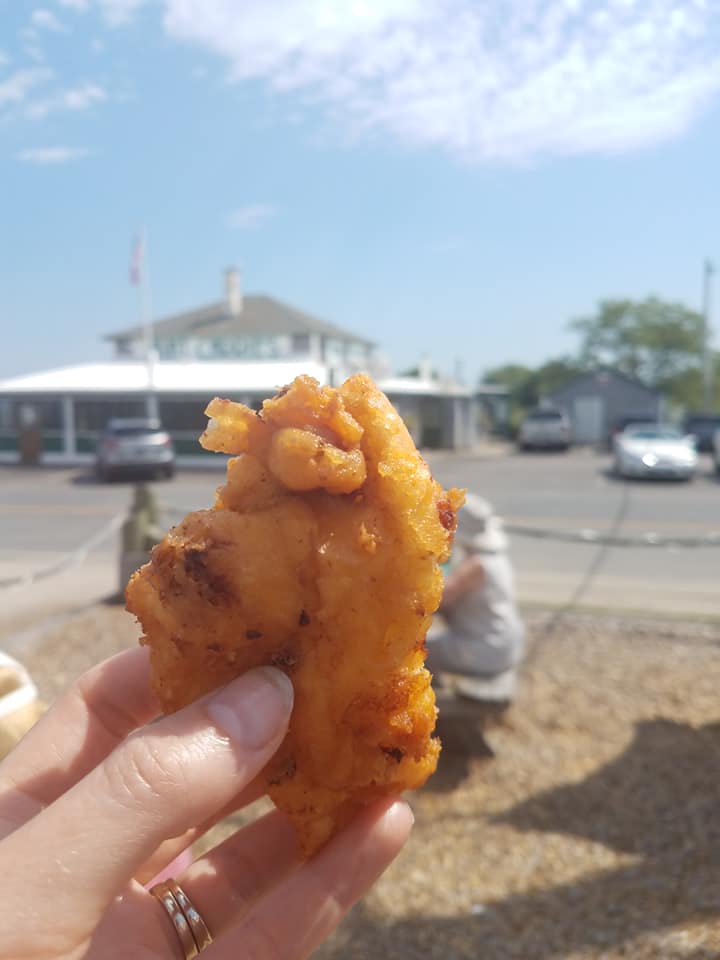 We called this part “the Battle of Point Judith,” because we sampled Aunt Carrie’s and Iggy’s clam cakes simultaneously, since they are pretty much across the street from each other. Aunt Carrie’s was the group favorite, but I think I got the last bottom-of-the-bag, greasy clam cake. You snooze. You lose. It was still good, but a little too greasy for my tastes. I need a do-over, and I mean that with the best intentions. 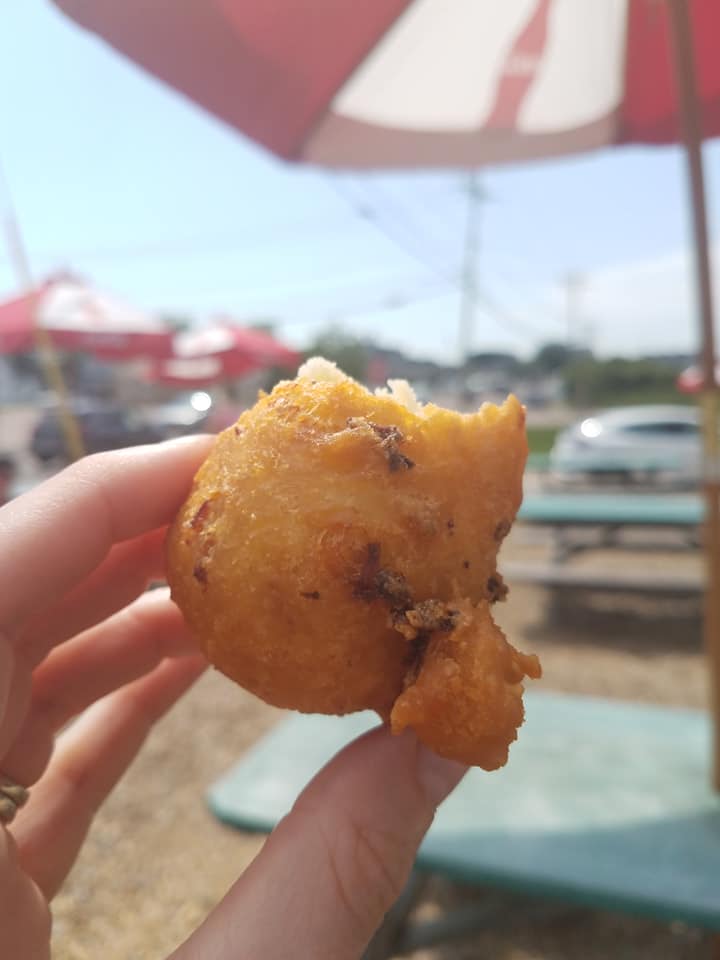 The Iggy’s clam cakes were perfectly round balls of crisp dough with little nubbins on the outside. While it is always a statewide favorite, we wondered why the clams had a pinkish tone to them this year. 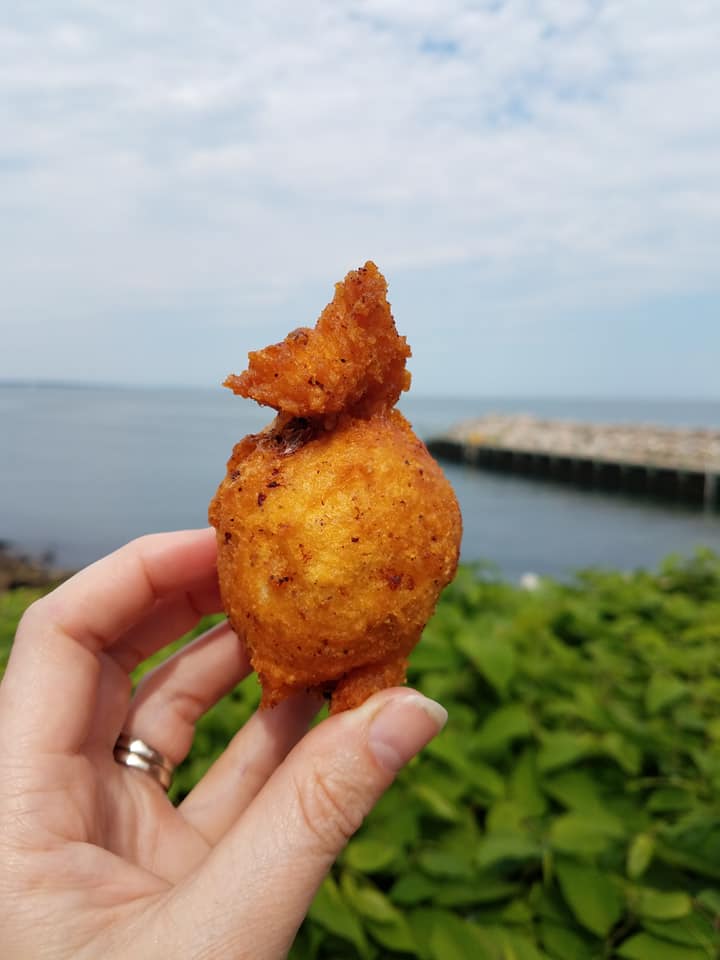 These clam cake beauties come with a spectacular view and they have some of the best crisp nubbins we’ve ever experienced. I love the extra touch with the freshly cracked black pepper seasoning. They are different from the others, and they are my favorite of the bunch. 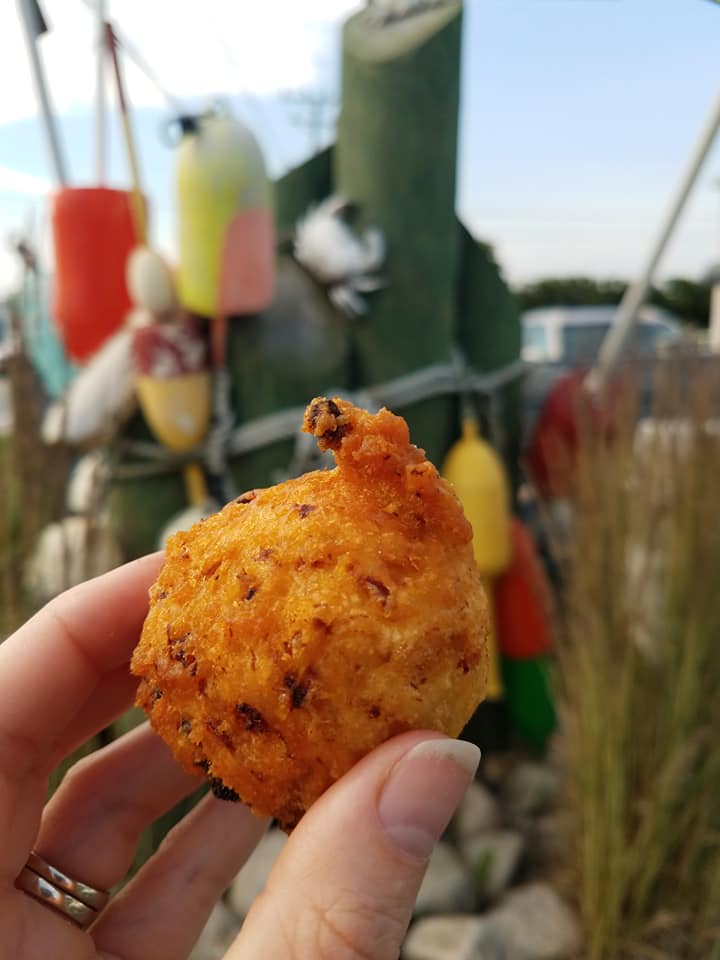 These are a good specimen of a clam cake! We could tell they use fresh, local clams. They are small but each had a crunchy exterior with extra crispy bits on the outside. Helpful hint: Make sure you get on the takeout side of the line if you’re grabbing food to-go, so you do not have to wait in the long line that is for table seating. 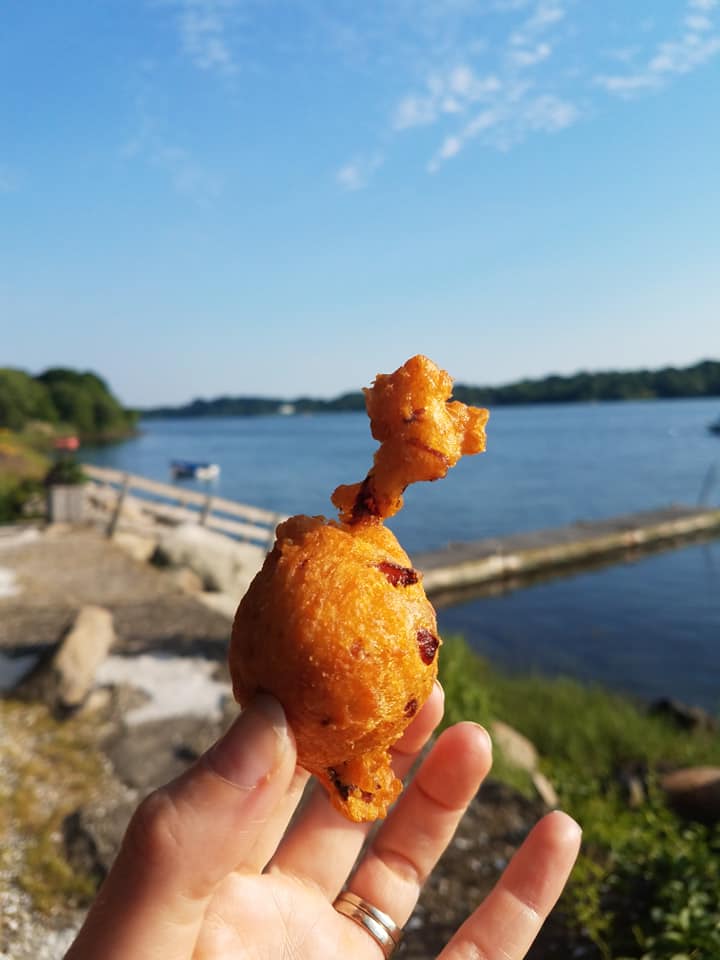 I have always been a fan of Evelyn’s clam cakes. They are a bit saltier than the others, but I am not afraid of salt. I especially appreciate the odd shapes that make a clam cake, a clam cake. It’s almost like a fried clam was sticking out of the top! Gotta love it. 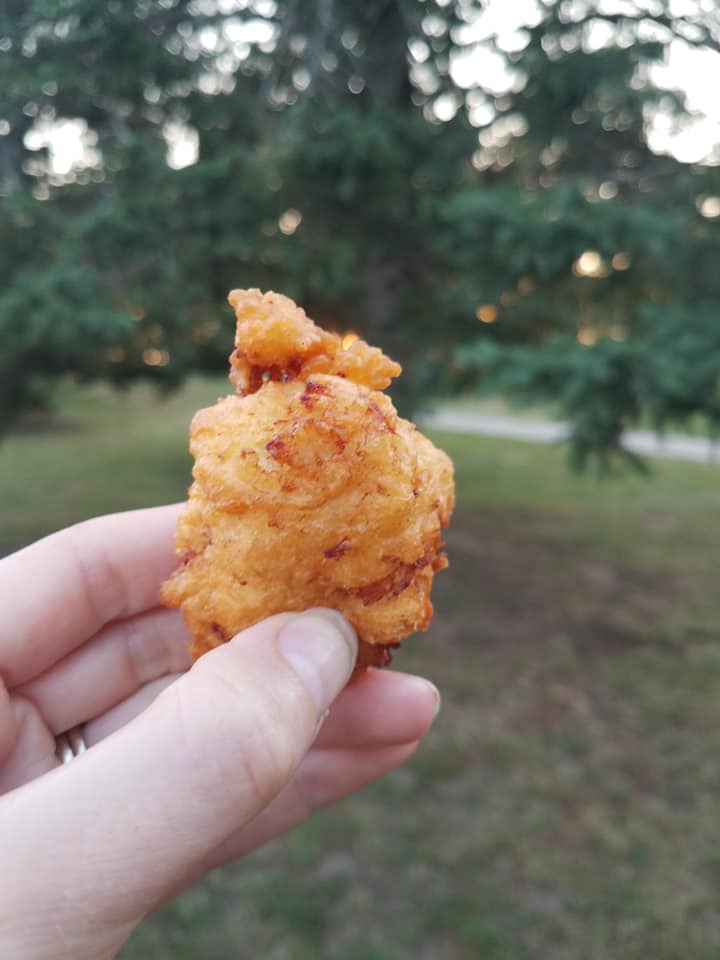 Quito’s clam cakes may be small. but they are mighty. They are really crisp and they even taste good when they’re lukewarm (it took us awhile to actually be able to eat them because our group got stuck in Bristol traffic). You can pop it in your mouth to get the full clam-to-cake ratio, which had one of the highest rates of our day. The spot also has a beautiful waterfront view of Bristol Harbor, right near the beginning (or end, depending on how you look at it) of the East Bay Bike Path. 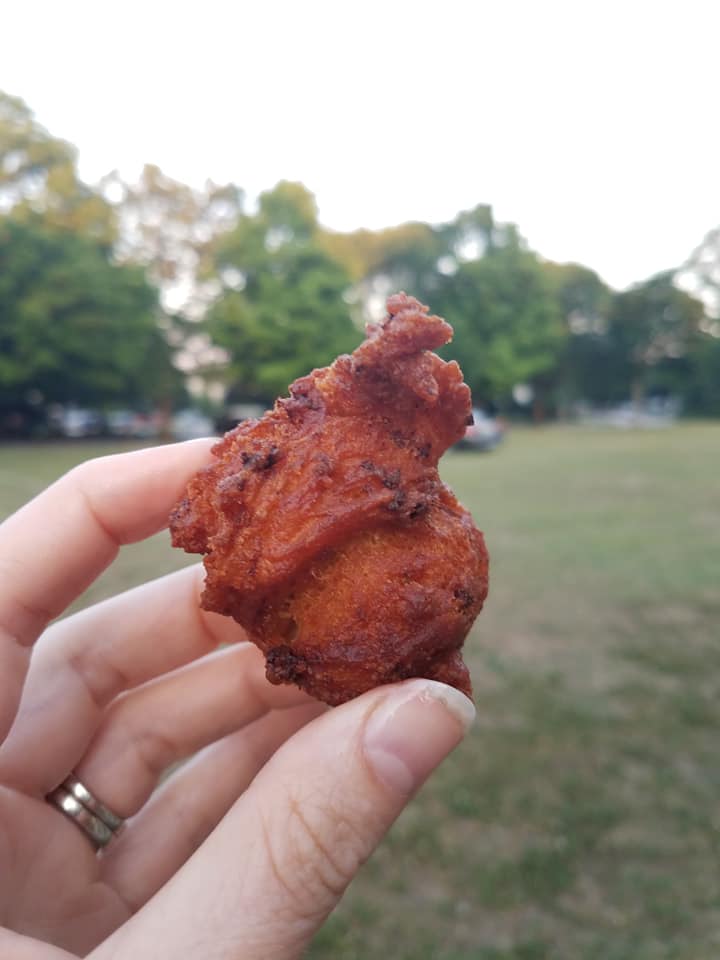 This is the reason you do not want to go to a clam shack at closing time., which is 8 p.m. at Blount in Crescent Park. It’s our fault we came so late (we were an hour behind schedule), and I usually love Blount’s clam cakes, but these were a bit overcooked and fried in last-batch-of-the day oil. Better luck next time!

…And for the Winner!

Clam Cake Crawl 2017: Who Has the Best Clam Cakes in Rhode Island?