What’s it Like to Be the PawSox Team Chef? 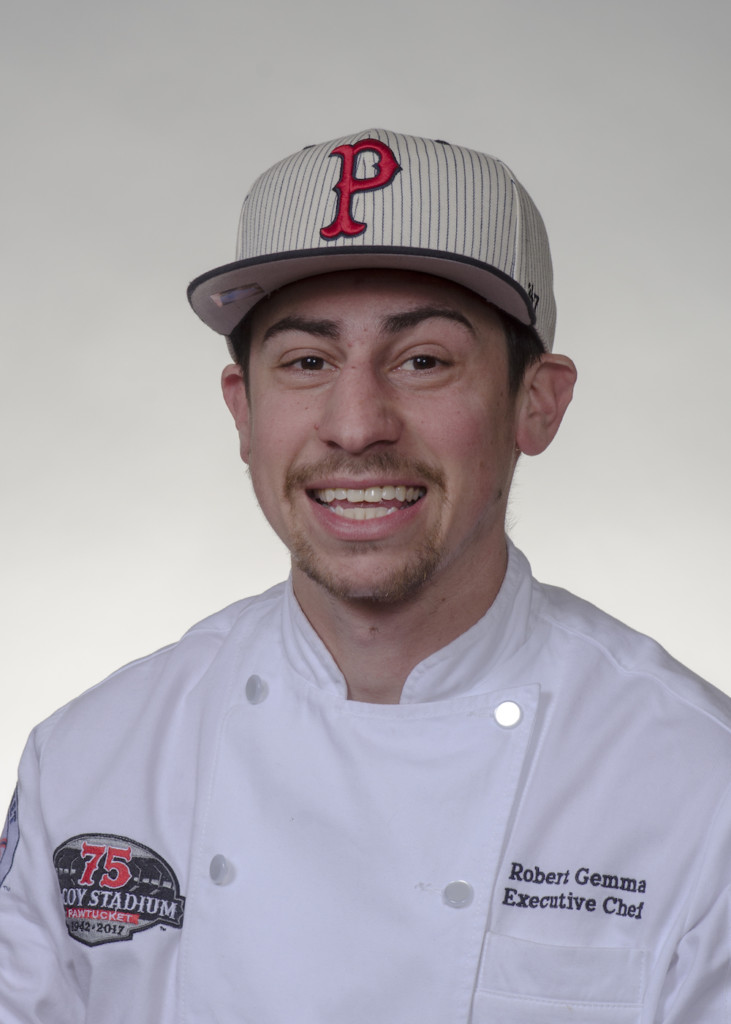 When you go to the ballpark, you might grab a pretzel, a hot dog, fries and ice cream. As you’re sitting there trying not to get ketchup on the new sweatshirt you just bought in the PawSox team store, a batter cranks a homerun into the bleachers. When you stand up to cheer for the home team, you let out a big groan followed by, “I am so full.”

You just watched a physically fit man use all of his strength to hit a ball 400 feet. These athletes are surrounded by ballpark food at every game, but they can’t possibly be in that kind of shape and be served hot dogs all the time. One of the secrets of the ballpark is that it has a full kitchen and an executive chef to prepare healthy, protein-rich meals for the players on both teams before and after each game.

Rhode Island native Rob Gemma was named the executive chef of the PawSox three seasons ago after serving more than a dozen years in the restaurant business. Throughout high school, he worked in various kitchens in Rhode Island and worked his way up from a dishwasher to a line cook before attending the New England Culinary Institute in Vermont. He completed his internship with the Boston Red Sox and was hired by the team as a sous chef and spent five seasons with the club. During his time with the Red Sox, he assisted in opening JetBlue Park, the Red Sox spring training park in Fort Myers, Fla., and the Royal Rooters Club, a premier gathering space for season ticket holders at Fenway Park.

A few years later, the executive chef of the Red Sox called Gemma and informed him that the PawSox head chef position was available, and Gemma jumped at the opportunity.

“I’ve been loving it since,” Gemma says. “It’s a completely different environment. There are different things every day. You never know what to expect.”

Proper athlete nutrition is often overlooked, especially in the Minor League baseball system since there is not as much money budgeted or generated as the Major League level. Gemma believes that the PawSox have one of the best nutrition and dining programs since their Major League affiliate, the Boston Red Sox, has been so involved with this aspect of the game. The Red Sox nutritionist, head chef and PawSox strength coach have consulted with Gemma on occasion but they all trust he is feeding the players properly.

With a 140-plus-game schedule, it’s easy to get burnt out by the end of the season. What athletes eat throughout the spring, summer and fall months determines how well their bodies are fueled and how they will perform on the field. Gemma makes sure that the players are getting the best nutrients at the proper time of the day. Since hopping on board with the Triple-A team, he uses the freshest local ingredients possible and avoids processed foods. He mentions that ninety percent of the products coming out of the kitchen are made in-house.

The baseball players for both teams are fed before and after the games. Day games are a rare occasion, but when the players have to get to the field early, Gemma sets up an omelet station. For night games, after the players take batting practice and warm up, Gemma feeds them something light in the early afternoon, but filling enough so that they have enough energy to get through the game without feeling weighed down. He prepares a light starch, a vegetable and a protein like lean chicken breast or thighs. “It’s become a requirement from the players that they get guacamole,” Gemma says with a laugh. In addition to the main meal, the players have a choice of sliced deli meat and cheese, fruit and snacks like trail mix or beef jerky.

“At times, I feel like I’m their mother making sure they eat enough food before they go out there,” Gemma says.

After nine innings or more, it’s time to refuel and prepare for the next game. He ramps up the protein to two servings, vegetables (“Surprisingly, a lot of these guys love their vegetables”), starch, white rice and a grain salad. “Something to fill them up after all the fuel they just burned,” he says. Once in a while, the players get a special treat of mac and cheese.

Gemma tries to keep the menu fresh and creative by highlighting multicultural foods on theme nights. “The ownership and the trainers let me do pretty much whatever what I want as long as it stays healthy and within the guidelines of good food for them,” he says.

When they’re traveling on the road, Gemma packs them food that’s easy to eat, but still healthy and loaded with essential nutrients. He and the organization want to make sure that the bus doesn’t have to stop and pick up fast food.

Gemma considers himself lucky to work for a program like the PawSox. “They treat me well which is nice…makes my job a little easier,” he says. Gemma mentions that his favorite part of working for the PawSox is that he has created good relationships with the players throughout the years and still keeps in contact with some that have moved up to the big leagues.

You hear of players in the Major Leagues making a couple million dollars a year, but Minor League salaries are much smaller. At home, many of these men don’t get the proper nutrition they need, so Gemma makes sure they do at the park. Gemma also gives players nutrition advice and loans ingredients and utensils to them so they can eat well on their own.

Gemma is constantly working whether the team is at the stadium or not. On game days, he not only feeds the players, but coaching staffs, front office employees, the media and the thirteen field-level suites. During the game, he assists wherever help is needed — at the barbecues or the terrace concessions. On off-days, Gemma is still at the park feeding staff, submitting orders or setting the menu for the week. The new ownership has been pushing for the kitchen to do catering events, which Gemma also handles.

He leads a small kitchen that feeds up to 600 people a day, but, to him, it’s a good feeling. “We’re a great ballpark; we have a great team… We’re here to make the fan experience that much better,” he says. “We’re all here to provide our guests with the best service.”

Seventy-degree days are in the forecast, which is a nice relief from the bitter cold for players, employees and fans. “Sooner or later, the weather will be there and we’ll have a full crowd,” he says. “There will be great summer nights.”

A Look Back at Former PawSox Owner Ben Mondor