The accent's on creative cocktails and small plates at these wildly different bars.

It takes some effort to find Courtland Club. Without a sign, a front window or any evidence of an operating business, it’s doggedly determined to remain a discreet social club, albeit one that’s open to the public. Tucked away on an unremarkable residential block on the West Side of Providence, its keypad door just slightly ajar, Courtland dares visitors to enter.

The cavelike interior is dominated by antiquated brick and dim lighting. A cozy bar gives way to a carpeted lounge area and century-old ovens built into the wall and long out of use. If Courtland Club is anything, it’s a mood: romantic, illicit, secretive — everything you want in a bar. The world outside falls away with the first drink, an aesthetic homage to the 1970s and the only explicit tie to American culture. They make a mean drink but the menu is punctuated by unexpected panache. Whiskey and mescal make way for the occasional pastel fruit drink, though all of the elixirs are tinged with fresh herbs. Food comes out of an Easy Bake Oven-sized kitchen, all the more remarkable given the proficiency and personality of the dishes.

A crudité bowl is designed more for the eyes than the mouth. Largely raw, the array of radishes and asparagus arrive served on ice in retro fashion with a side of green goddess dressing. But order a full dinner and an exotic-accented server will place a card table next to your sprawling section and the parade begins.

The culinary ambassador of Courtland is a mason jar of chicken liver paté sealed with a thick layer of Manischewitz jelly and served with shards of matzoh. If you have no personal reference for this dish, consider it an amalgam of kitsch and culture, a throwback that extends to no specific decade as much as it references your grandmother’s grandest hopes for you. Delivered on a small cut glass platter with pickled onions, it’s the perfect underground appetizer: It’ll nestle in the recesses of your mind somewhere between glee and trepidation and, days later, you won’t quite know what to make of it.

But the wee kitchen has more up its sleeve, including a thin-crust pizza that howls umami with its pungent trio of anchovy, furikake and nori. They’re even known to whip up nightly specials like dense crab cakes with tangy tartar and a handful of fresh pea greens. Everything on a plate surprises a little given that the space promises it will keep every one of your secrets; you wouldn’t think they’d have time to create a platform on which new memories could be formed on both food and fantasy. But ambience is the most elusive of all retail characteristics and from it, everything else is born. Courtland can call itself a bar, a club or a restaurant; it doesn’t really matter. It’s just a cool place to call home for the night. 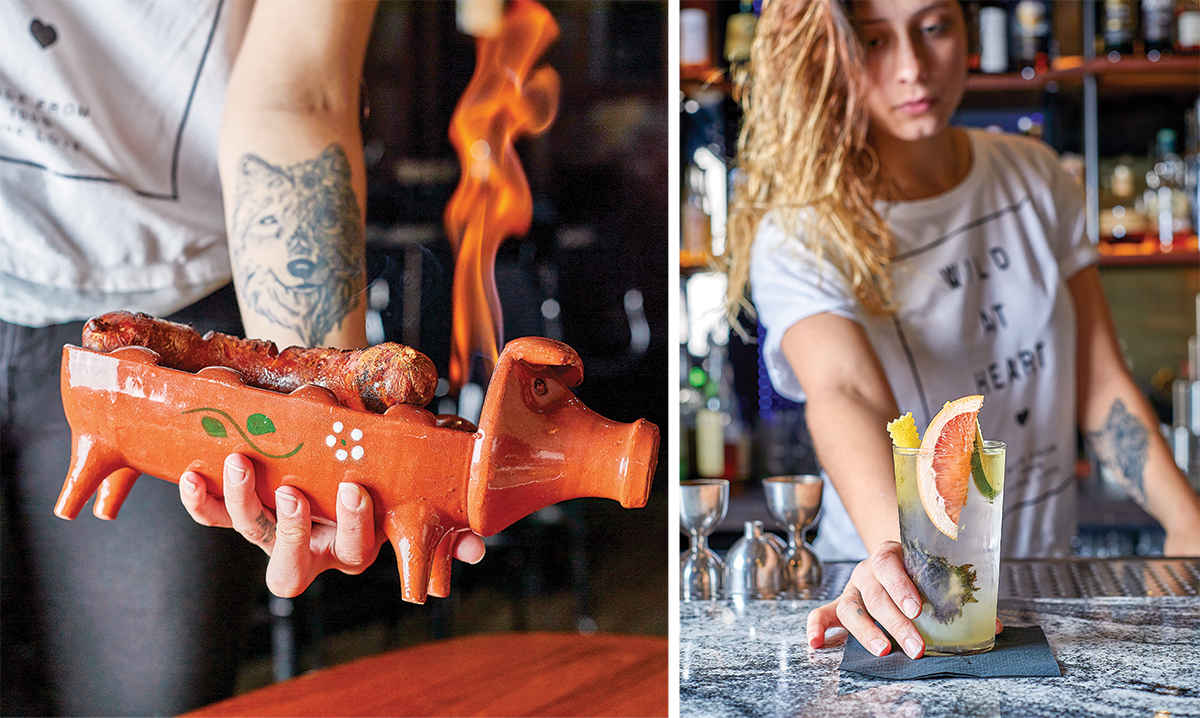 Chourico a Bombeiro; gin and tonic. Photography by Angel Tucker.