The accent's on creative cocktails and small plates at these wildly different bars.

Kai’s goal is to bring the outside in. True, it’s on a busy corner of EG’s Main Street but, with the windows thrown open and the string lights twinkling, the tiki bar vibe prevails. There’s an insistent informality in the space: shiplap covers the walls in worn blue-gray, reggae hovers in the air and the young staff looks as if they just came in from the beach. But for dedicated bar-dwellers, age is inconsequential. Sixty-somethings meander in wearing Jimmy Buffett T-shirts and the space is just as welcoming, the tap just as cool.

There’s plenty of beer, including the “Lawnmower” section, which was dad’s go-to for daytime drinking back in the ’burb: Bud, Coors, Miller High Life.

A dense selection of sours, ciders and just-plain-weirdos (Wormtown Be Hoppy) round out the list but Kai is a place where delicate cocktails rule. If the goal is to recreate a surfer’s buzz, it’s an easier task tinged with traces of grapefruit, pineapple, hibiscus and lime.

If your inner drinker is barely legal, there are slushie machines turning behind the bar that can readily disguise your drink as a confection closer to cotton candy than the hard stuff. Most nights offer live music of one sort or another, which may be the only reason people come in from the deck. Early in the evening, as one uninitiated couple slides into a corner table, the bartender walks over with obvious confusion. “There are seats outside,” he assures them, picking up their menus and leading them to a coveted spot they haven’t yet realized they wanted. “It’s a beautiful night,” he adds like Buddha offering the path to enlightenment to a pair of poor city folk. 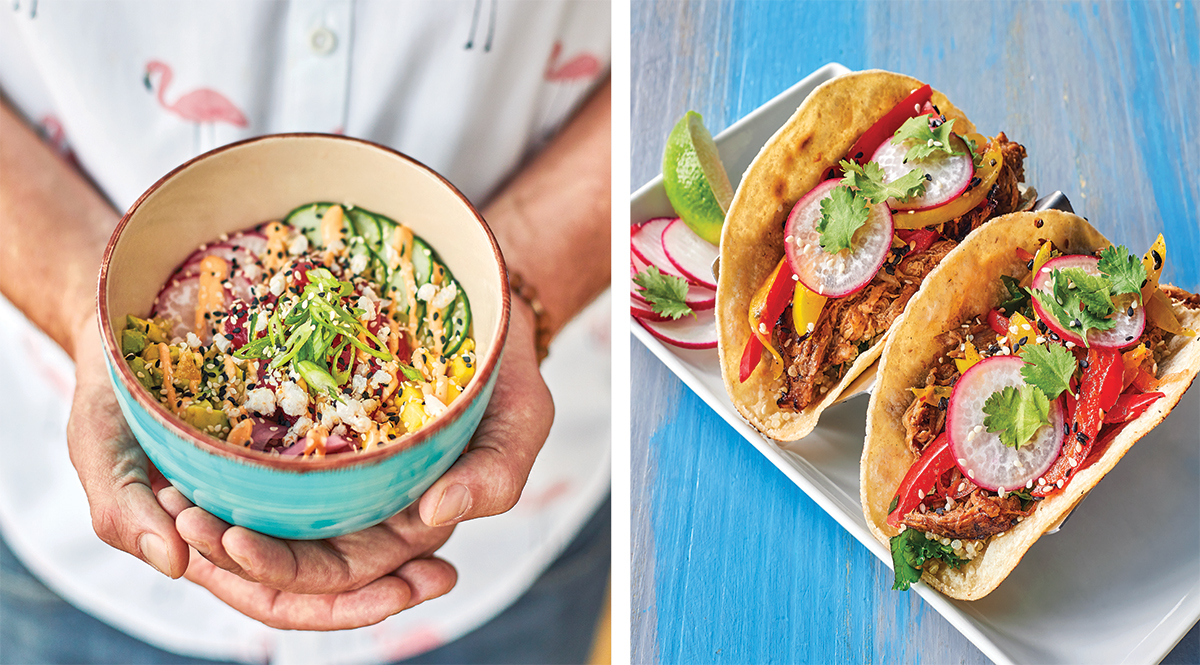 You could spend your night on liquids alone, but the menu is designed to get you through the evening without breaking plans to hop on a surfboard the following day. Barely seared tuna is the protein of choice, in poke bowls, tacos and on crispy wonton nachos drizzled with wasabi aioli ($14). A trio of bao buns stuffed with chicken and hoisin ($13), reminiscent of our favorite childhood sandwiches, flavored by the Far East, can be devoured in a few bites. In a sense, this is beach tapas; everything is Asian-tinged and capable of being carried from one sunbeam to the next. Even burritos ($12) and sliders ($11) are punctuated with fresh pineapple or pickled onion because, if there’s a signature flavor profile, it’s bright acidity.

The interior thrives on a small degree of irreverence: Cards Against Humanity, none of which can be quoted in good taste, sit on the table and Kai’s songwriter series opens the mic for anyone with a musical story to tell. But there’s always a common toast for every drink poured. It’s a salute to the sun, a prayer for the sea, a possibility of making a life for yourself in something that resembles a yurt on the beach more than a brick and mortar house. Funny how quickly the asphalt fades away with a little Bob Marley and a lot of basil gimlets.