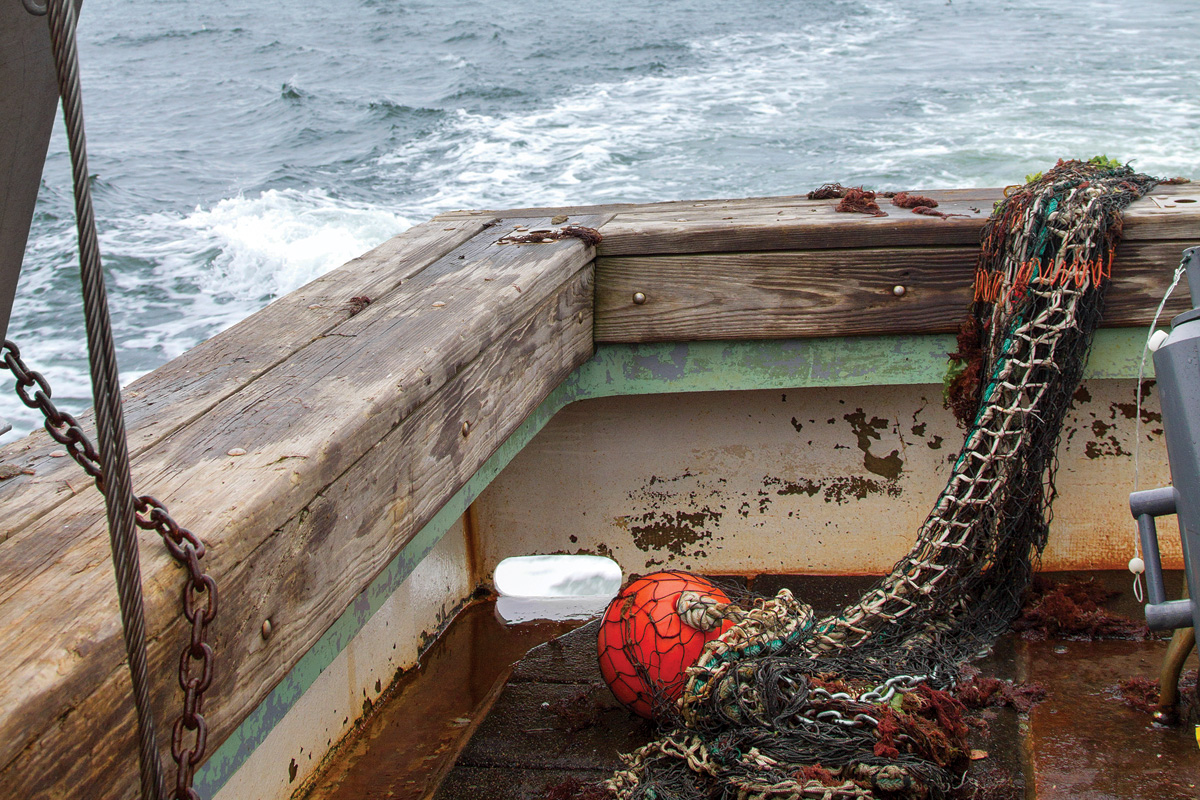 Some fishermen who used to work the bay now head offshore in search of more fish. Photography by Michael Cevoli

Soon after, Oviatt shifted her research to focus on water quality and the complex interactions taking place in the bay. She collaborated with the late URI professor Scott Nixon to create a model of how the bay worked, which required studies of nutrient cycling, phytoplankton growth, the seasonal distribution of fish, the creatures living on and in the seafloor, and the relationship between primary production and low oxygen levels.

According to Oviatt, wastewater treatment facilities contribute most of the nitrogen that enters Narragansett Bay today, with relatively small quantities coming from runoff from land and natural sources deep in the ocean. In fact, she says, the treatment plants deliver about five times more nitrogen to the bay than entered the bay naturally prior to the Industrial Revolution.

She also notes that Narragansett Bay has been experiencing dramatic changes since long before the nitrogen reduction plan was implemented. Lobster and crab numbers crashed in the early 2000s, for instance, probably for a combination of reasons unrelated to nitrogen: increasing numbers of predatory fish eating young lobsters; warming waters that are stressing juveniles; and a disease on lobster shells that is exacerbated by increasing water temperatures.

“Fish have rushed into the bay to replace that loss of biomass and take advantage of the food supply that lobsters and crabs used to eat,” she said. “Fish appear to have increased in the bay, especially scup, which is the most dominant fish in the bay now in summer.”

The results of a weekly fish trawl at two locations in the bay — a project begun by URI scientists in 1959 and is still going — appear to back up that assertion. In the early years of the survey, most of the species collected in the nets were fish and invertebrates that live on or near the bottom, like lobster, winter flounder, tautog and cunner. Those species also happen to prefer cooler water. In recent years, the species that prefer warmer waters and that live higher in the water column have dominated the trawl survey results, including butterfish, scup and squid. But while the species composition has changed, the total number of fish has increased, Oviatt says.

Robinson Fulweiler, an associate professor at Boston University, began studying the changing levels of nitrogen in Narragansett Bay while she was a student at the Graduate School of Oceanography in the early 2000s. She says that the bay has been experiencing fewer and smaller algae blooms since the 1970s until the last few years, which her research has linked to changes in the bay that are occurring as a result of the changing climate, including increased precipitation, reduced wind and warming waters.

She also says, however, that the nitrogen reduction plan was “a tricky decision to make.” A native of Saunderstown, Fulweiler studied under Nixon, who called the nitrogen plan “a grand experiment” and warned about the possible negative implications on fish populations.

“But it’s too simple to blame everything on nitrogen reduction,” Fulweiler says. “We already had a change in nutrients in the mid-bay, we already had a decline in the lobster fishery, but things were already changing.”

Nitrogen isn’t the only thing on the fishermen’s minds when they claim that Narragansett Bay is too clean. They are also worried that the bay has been poisoned by chlorine and other chemicals being discharged from the state’s wastewater treatment plants. Treatment plant operators use the active ingredient in chlorine bleach to kill bacteria in the wastewater before it enters the bay. Tom Uva says it’s just like disinfecting your toilet at home. But because the bleach would be toxic in the bay, the treatment plants use another chemical to neutralize the bleach just before discharge.

URI chemical oceanographer Arthur Spivack, who solved the mystery of the explosion at Salty Brine Beach in 2015, says the total residual chlorine released into the bay by the wastewater facilities has actually decreased dramatically since 1997 when the neutralizing chemical was first used, from 1,300 pounds per day down to twenty pounds. Uva says that’s less than a tenth of the quantity the state allows the plants to discharge.

Spivack has heard some fishermen complain that the bay occasionally emits a chlorine smell, but he believes they may be smelling another chemical that frequently occurs over algae blooms.

“I don’t want to dismiss the fishermen’s arguments,” Spivack says. “It’s unlikely to be that chlorine pool smell, though, because the amount released into the bay is so low.”

To make his case that the treatment plants are having an impact on the health of the bay, Uva uses video to monitor the marine life that swims in the waters near the Narragansett Bay Commission wastewater treatment facilities. A clip he showed at a recent public meeting features crabs of several varieties, flounder, black sea bass, starfish, tautog, menhaden and kelp.

The fishermen aren’t convinced, however. They acknowledge that the upper bay is still somewhat productive because there is plenty of nitrogen finding its way into the water from the urban communities. But they say that their lobster traps used to become covered with barnacles after a few days in Narragansett Bay, and when they pulled their traps in, they would be entangled in several varieties of seaweed. Not anymore. Only the traps placed outside the bay in Rhode Island Sound become barnacle-encrusted and seaweed-entangled.

“Everyone wants to be green, but nobody wants to address what we’re dumping into our bays and estuaries,” says Dellinger. “That’s the biggest issue facing our inshore fisheries up and down the coast. No matter who we talk to, they all have the same concerns.” 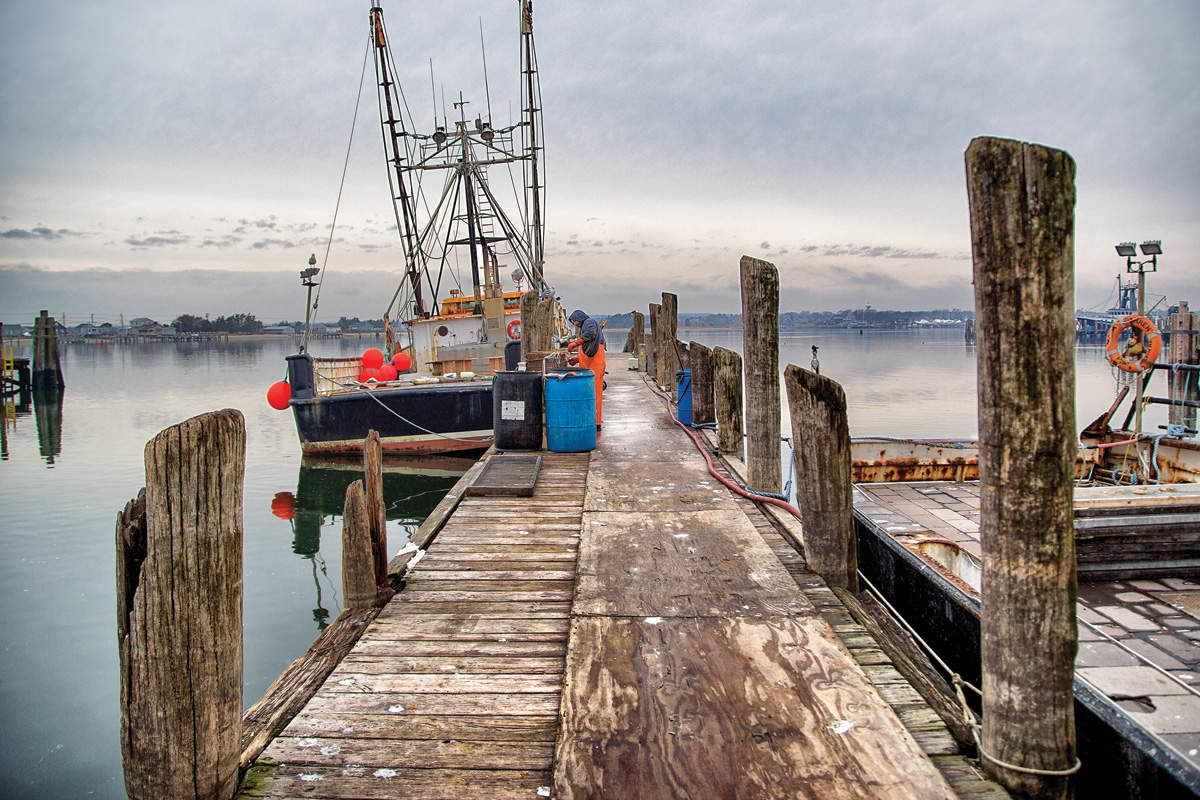 A lobsterman in Point Judith, where the cxatch has been less affected than in the bay. Photography by Michael Cevoli

Oviatt has no explanation for the fishermen’s observation that little seaweed now grows in the bay, other than to point out that during the summer the water in Narragansett Bay is generally a couple degrees warmer than in Rhode Island Sound, and that temperature variation may be enough to make a difference. In response to the fishermen’s concerns, she has started to conduct studies of the effects of predators and warming temperatures on lobsters and whether fish abundance in the bay has changed since the nitrogen reduction plan was implemented.

“I’m trying to work with the fishermen,” she says. “I’m concerned about their concerns.”

Eagles and Dellinger say the answer to their concerns is easy. First, stop using chemicals to kill bacteria in the state’s wastewater treatment facilities and use ultraviolet light instead, a method being used at several plants in Rhode Island already. The light kills the bacteria by damaging its DNA, though Uva said it isn’t as reliable as the chemical process, and less reliability means more harmful bacteria finding its way into the bay.

And second, “take this nitrogen reduction campaign and revert it back to before 2014 to let some nitrogen go back in the bay to feed the plankton,” Eagles says.

The scientists say it is premature to take that step just yet.

“We have to give it a little more time,” Fulweiler says. “We need to see what we can learn from this first. The Narragansett Bay we have now is not the bay of the past. It’s undergoing a lot of changes, not just with nitrogen, and we have to study those changes. I’m not ready to say that the changes have happened because of the reduced nitrogen load.”

Save the Bay officials say they would oppose any effort to revert back to the days when more pollutants were discharged into the bay.

“Even with advanced wastewater treatment in many of our plants, we continue to discharge nitrogen from human waste at levels that far exceed the levels of nitrogen 150 years ago, when we had a thriving bay,” says Jonathan Stone, the watchdog group’s executive director. “The blanket statement that the bay is too clean and can’t support aquatic life — there’s no evidence of that. We have tons of fish in the bay, just different kinds of fish than we used to.”

He points to climate change, changing predator-prey relationships, overfishing and the seasonality of some species as contributing factors to what the fishermen have observed.

“It’s overly simplistic to point to one variable and say this is the answer when there are so many interactions among the variables. It’s inconceivable to me that we’ve cleaned the bay too much,” Stone says.

He notes that there is clear evidence that water quality is still impaired in many areas of the bay, including Greenwich Bay and areas around Aquidneck Island.

“It’s incumbent on all of us to do everything we can to improve water quality across every region of the bay,” he says. “That’s what motivates us. We want to restore the ecological health of the bay as best we can. And we still have work to do.”

At the conclusion of a public meeting on the health of Narragansett Bay last winter, Candace Oviatt tells an audience of fishermen, scientists and students, “The bay is always changing. Every year is different. Whether we like it or not, the bay is going to keep changing.”