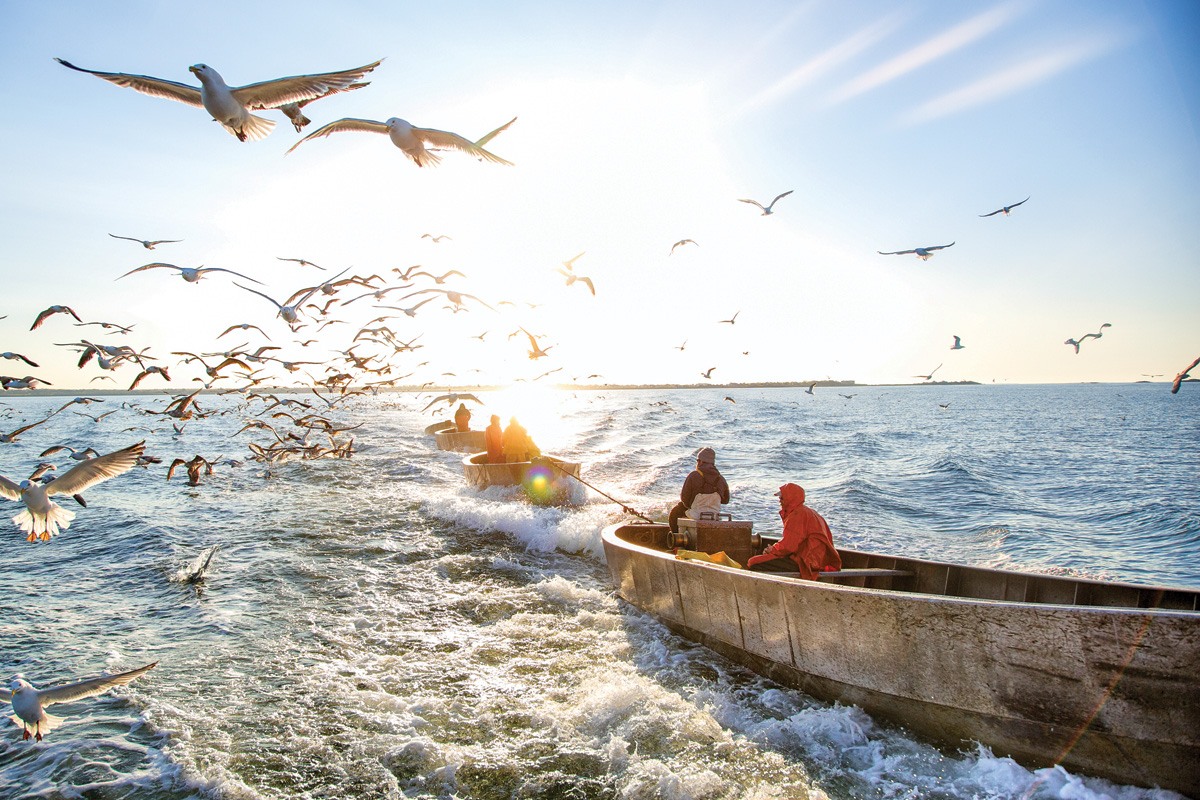 Some fishermen who used to work the bay now head offshore in search of more fish. Photography by Michael Cevoli

By 2013, the state achieved its goal of reducing nitrogen discharges by 50 percent. Since then, the levels have declined even farther. The result has been a bay-wide reduction of 30 percent in the growth of these tiny marine plants; in the upper bay it’s down even more, by 44 percent. The water is also a lot more clear.

Eagles, whose father was a lobster fisherman, started lobstering when he was ten years old, working from a fourteen-foot skiff and using wooden lobster traps he built himself. He later went offshore lobstering during school vacations and when he had time off as a merchant marine.

“I got the lobster fishing bug early and fell in love with it, and I knew it was what I wanted to do for my career,” he says. “I had my boat built forty-five years ago — the same one I have today — and I spent most of my career fishing in Narragansett Bay for lobsters, crabs and whatever fish species were legally available to harvest.

“I love everything about fishing — the independence, you make your own schedule — but the best part is being on the ocean. I love the water, I love the seagulls, I love the landscape and all the marine life. I’d rather be on the ocean than on the land.”

Dellinger, fifty-five, says his story is similar. He started quahogging in junior high school in the 1970s, went full-time in the ’80s and enjoyed the freedom that came with being his own boss and working on the water. He transitioned to lobster fishing when he realized he could make more money that way. He started harvesting lobsters in Rhode Island Sound in the 1990s.

“It’s cyclical, so you have your ups and downs, but the bay was always good,” Dellinger says. “You could make a good living from Dutch Island to the upper reaches of the bay. There were about 1,000 shellfishermen in the ’80s and early ’90s — so many guys out there that a couple houseboats would come out every day as caterers for the shellfish fleet. But no longer.”

Dellinger stopped fishing in the bay a couple of years ago when the abundance of crabs and lobsters declined so much it became unviable. He confines his effort to offshore waters now. Eagles splits his time between the ocean and the bay, though his time in the bay is entirely spent south of the Newport bridge, where the ocean has a greater influence on how plentiful the catch is.

“We probably had the most prolific lobster area in the whole East Coast in the ’90s,” adds Eagles. “Maine couldn’t hold a candle to us back then. Now it’s switched around and Maine is lucrative and Narragansett Bay has diminished.”

Eagles and Dellinger first heard that something might be affecting Narragansett Bay’s lobster fishery from a friend who was fishing in the upper bay.

“It was six or seven years ago, and he was telling us there was something wrong with the lobsters up there. The biomass wasn’t there anymore,” Eagles says. “The lower bay where we were working was fine, so we weren’t too concerned about it, but the upper bay kept getting progressively worse until it finally caught up to us. That’s when the catch dropped off significantly.”

The gruff exterior and salty language of the fishermen contrasts sharply with that of Candace Oviatt, an oceanography professor at the University of Rhode Island who has been studying the inner workings of Narragansett Bay for more than fifty years. The first woman to earn a doctorate degree at URI’s Graduate School of Oceanography, she has a quiet and reserved demeanor that belies a sharp wit. Oviatt remembers sampling the polluted Providence River in the 1960s to study the impact of starfish on the declining oyster populations.

“We thought the state of the bay was wonderful,” she recalls. “We knew pollution was bad, but it didn’t affect how we saw the bay or worked in the bay. But at that point there wasn’t a lot known about what was going on, so it wasn’t considered a problem. And then we started measuring oxygen levels, and it was really very low. That’s when it dawned on us that the wastewater treatment wasn’t working. And with metals coming in from ancient industries and everybody putting used motor oil down their drains, the water was pretty toxic.”