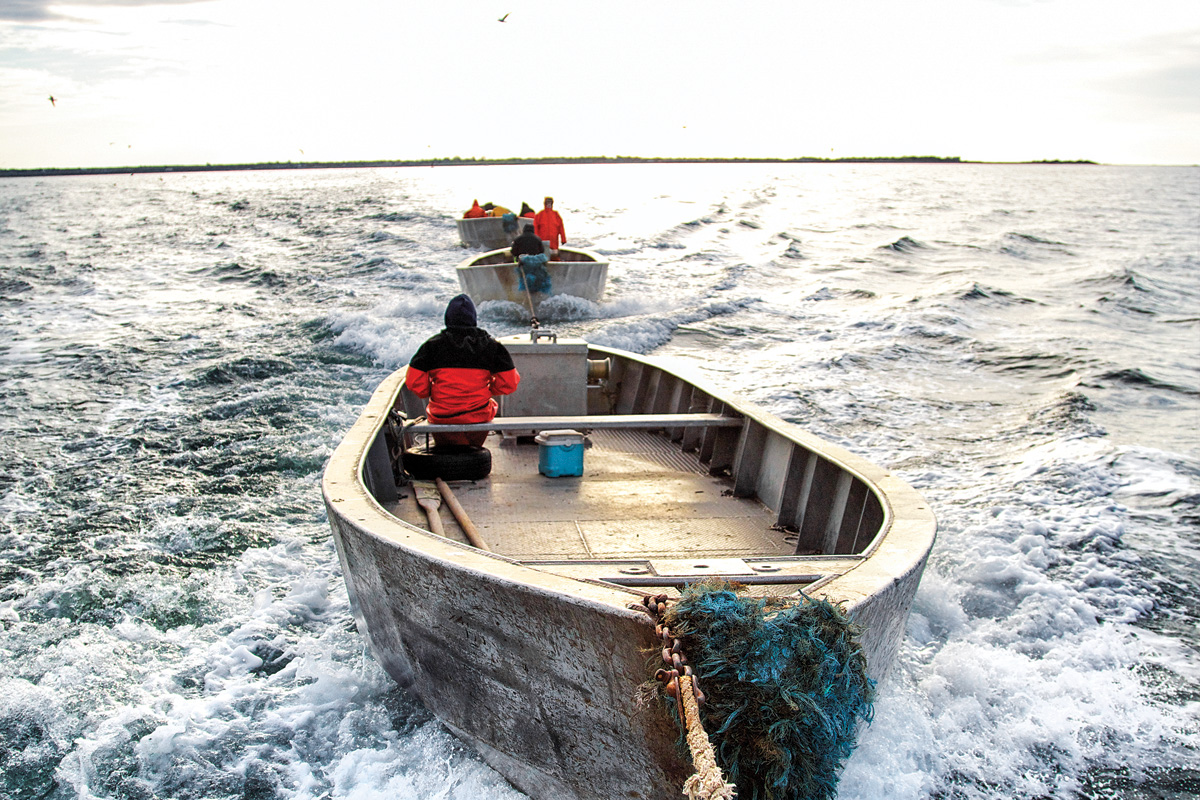 Fishermen on day boats fishing for scup, the most dominant species in the bay during the summer. Facing page: an algae bloom in the bay. Photography by Michael Cevoli

Whenever lobsterman Al Eagles finishes fishing for the day, he scoops up a bucket of water from Narragansett Bay to wash down his boat. And every time he does so, he glances into the bucket to see what’s in the water. In the past, he saw an abundance of tiny marine plants called phytoplankton, equally tiny animals called zooplankton, and occasionally something a little larger. Lately, however, when he glances in that bucket of water, he sees nothing but water.

“There’s nothing swimming in it; there’s no life at all,” he says. “We’ve turned Narragansett Bay into a swimming pool, which is good for swimming but not good for the marine environment. It’s become a dead environment. It’s supposed to be murky with marine life.”

Eagles, a sixty-eight-year-old resident of Newport, and fellow lobsterman Lanny Dellinger of North Kingstown, are two of many fishermen concerned with how Rhode Island has changed the way it treats wastewater before sending it into the bay.

“It’s Chernobyl out there,” says Eagles, referring to the Russian nuclear plant that melted down in 1986 and left a wide area around it devoid of life. “It’s the same thing in Narragansett Bay.”

The idea that the bay could be — let alone is — too clean is highly controversial. Most people would agree that the decades of work and investment to reduce the volume of pollutants in the bay has been worthwhile and should continue. While the scientists who study the bay and its inhabitants disagree with many of the fishermen’s conclusions, the scientists acknowledge that they don’t have all the answers to explain what Eagles, Dellinger and their colleagues have observed.

The main culprit in what the fishermen see as a decline in marine life in Narragansett Bay is nitrogen. They say the wastewater treatment plants aren’t discharging enough of it.

Nitrogen is a naturally occurring element that makes up about 79 percent of the Earth’s atmosphere. Most fertilizers are made of nitrogen, and humans excrete several grams of it in their waste every day. In water bodies, nitrogen causes algae to bloom, much like it stimulates fertilized grass to grow. And when discharged in large quantities into Narragansett Bay from wastewater treatment plants, it can cause widespread algae blooms in the summer that often result in poor water quality that can suffocate marine life.

But algae is also the first step in the marine food chain. The larval stages of lobsters and other commercially important fish and shellfish eat these tiny plants. Without enough nitrogen being delivered into the bay to stimulate their growth, however, the microscopic marine creatures feeding on them will starve, and other aquatic life may avoid coming into the bay. That’s what Eagles and Dellinger believe has happened as a result of what they consider an overreaction by state officials to a fish kill that occurred in Greenwich Bay.

When approximately a million fish, mostly menhaden, washed up dead on beaches in Warwick and East Greenwich in August 2003, it caused a public uproar. The governor and the General Assembly responded by establishing commissions to study what caused it, and scientists concluded that it was the result of a unique set of circumstances that included stagnant water, a neap tide, excess nitrogen and other factors. The only one of the causal factors that environmental managers could control was nitrogen levels, so the Environmental Protection Agency directed the state to impose regulations to reduce discharges of nitrogen from the state’s wastewater treatment plants by 50 percent. Most of the reductions were mandated for treatment plants where effluent flowed directly into the bay, especially the Fields Point and Bucklin Point wastewater facilities operated by the Narragansett Bay Commission.

According to Thomas Uva, the commission’s director of environmental science and compliance, the Narragansett Bay Commission spent $44 million to modify its facilities to reduce the discharge of nitrogen from its two treatment plants by 80 percent, the target established by the Rhode Island Department of Environmental Management. The facilities use bacteria to break down the nitrogen and convert it to a gas that is released into the atmosphere. “We’re basically taking the nitrogen out of the water,” Uva says. “It’s expensive to build and run, and it’s very sensitive, so the process doesn’t run well under some conditions. But we met our permit level goal and we’re maintaining it.”