In a storied trade that dates back centuries, students learn boat-building at the International Yacht Restoration School in Newport. And the ultimate thrill? It comes on graduation day when they launch their small vessels for the first time.

Ryan Lynch calls upon the spirit of his grandfather, Joseph White, when he needs help during his hands-on training at the International Yacht Restoration School in Newport. White worked at Newport Shipyard during the America’s Cup heyday here. He died in 2005, at ninety-five.

“Poppy, help me out,” the thirty-year-old Lynch recalls with a smile one morning during a break, as he repeats the words he uses when he needs his grandfather’s help. Sure enough, the answer always finds its way into his head. “I know if he were alive,” Lynch says, “he’d be here every day, watching.”

Will Oberg is twenty-two, curly blond hair springing every which way as he talks about his training at IYRS. He, along with Lynch and three others, makes up a team who are restoring a sixteen-foot Herreshoff. They are all in the second year of the school’s two-year program.

“If there’s one thing I’ve learned,” says Oberg, who works at the Kayak Centre of Rhode Island in Wickford and, in season, drives a pedicab around the streets of Newport, “it’s that for every single problem, there’s a solution. If you can break it down into small pieces, it can be done.”

Teacher Bill Kenyon is here as well, a former student who graduated as a boat builder after a seemingly incongruous lifetime in the Rhode Island restaurant industry. He became an instructor a year ago.

“Every year, eighteen people from around the world come here, most with no experience in building boats. Many don’t even have sailing experience,” says Kenyon. “They start from scratch, and they build a boat.”

They learn slowly. First, they make their own tools, such as hand planers. Then it’s classroom work, creating drawings and working on the boats. They learn the craft by doing, taking old carcasses down to their bare essentials and building them back up again, painstaking plank by plank, bronze bolt by bolt, until they are new again, nautically reborn.

Rhode Islanders all, but with disparate backgrounds, keeping alive the art of wooden yacht restoration and building, in the heart of the state’s maritime center.

That a difference six months makes.

Beetle Cats are splendid, rugged little boats, great tools to teach sailing, Kenyon says. The school is housed in an ancient brick building on lower Thames Street that started life as a mill and was later turned into a power plant. The Cats are lined up, side by side, as students peel off layers of wood, leaving little more than skeletons behind.

Six months later, the boats are largely rebuilt and finely sanded, with all new wood, the result of hours of muscle-tiring work. A fully restored Beetle Cat can fetch $11,500.

“Until you get here, you don’t have an appreciation for the subculture that exists in the wooden-boat world,” Kenyon says amidst the cavernous work space. “It’s a niche, a small subculture of people either interested in it when they’re young or who have had it in their families.”

Lynch recalls his grandfather’s time in the trade, evidence of which abounded at the Middletown family home where the younger Lynch still lives today. “He knew all the America’s Cup people. He knew Ted Turner. I remember growing up and seeing pictures of him with all those guys,” Lynch says in proud, familial admiration.

He was never into sailing, however, and didn’t know what he wanted to do. He enrolled at Bristol Community College in Fall River and changed his major six times. Then he dug out a newspaper story about IYRS that his grandfather had clipped. 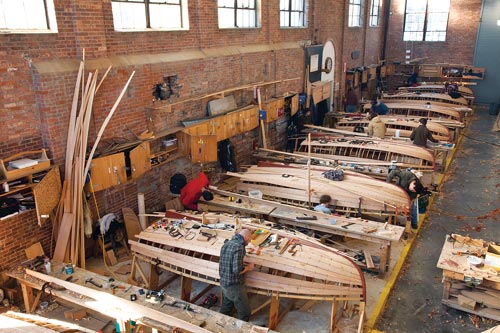 “I figured this might be a good opportunity,” Lynch says.

Although the work is long and hard, shoulder-straining and back-breaking, Lynch loves it all. “It’s the greatest thing I’ve ever done,” he says. “I found my niche.”

Oberg never had any sailing experience, either. The closest he’d come was kayaking, his other big passion. He went to University of Rhode Island and later Community College of Rhode Island, but nothing seemed to click in his forever-whirling mind. As a kid, he’d learned something of the woodworking trade with his dad doing home renovations.

“I figured my hands work pretty good,” Oberg says of his decision to learn boat-building. “Let’s cultivate that.”

At IYRS, there’s no such thing as a typical school day.

“You come in one morning thinking you’re doing one thing and you learn a whole new thing,” Lynch says. Students are constantly fairing; that’s the sanding of a boat’s hull to make it smooth. “You do it for a solid week and a half, your shoulders kill, you can hear your sternum cracking,” Lynch says. “I lost five pounds just doing that.”

For Kenyon, his scant year-long career as teacher is about as far from his food background as he thought possible. He’d started out washing dishes at York Steak House in Warwick Mall when he was sixteen, worked through various restaurants and got a culinary degree at Johnson and Wales along the way. Eventually, he managed Gregg’s Restaurants; boating was just a hobby.

When he and his wife chartered a boat for a trip from Antigua to St. Martin to celebrate their twentieth anniversary, they discussed what the next twenty years would bring. They decided on sailing.

He quit the restaurant business and one day came to IYRS and found himself on the mezzanine above, as many tourists do, studying the work going on below.

“I stood there for an hour, watching,” he says. “My wife finally said, ‘you should do this.’ ”

He did. Around the mezzanine are photos of IYRS grads. The 2006 frame has a picture of Kenyon, a bearded, dark-haired student looking very much the scruffy boat builder, quite unlike the clean-shaven, grayer teacher he is now.

The sexy part of IYRS — the wooden boat restoration school — was founded in 1993 in Newport, but it also has two other notable programs, both in Bristol.

The nine-month marine systems program was rolled out in fall 2007 with support from the Rhode Island Marine Trades Association and in partnership with the American Boat and Yacht Council; it’s an in-depth program that includes training in onboard systems such as electrical, fuel, propulsion and steering. The composites technology program, also nine months, began in 2010, high-tech stuff that teaches skills in demand not only by the marine trades, but also in aerospace, wind energy, automotive and construction.

It is not a cheap place to attend; base tuition is $15,420 for the restoration component and upwards of $17,000 for the others. Despite that, the school has been at its roughly three-dozen student capacity the last few years and boasts a job-placement rate of 85 percent.

The Bristol site is all metal, industrial and new. The Newport location is gloriously old,  a massive brick building, drafty and cold, with walls thirty feet high and giant, grimy windows.

Two massive misters hang overhead and spritz water into the air to keep the wood moist and malleable. In the middle of the floor, a huge, belching wooden steamer adds to the humidity. Beetle Cats line one side of the room opposite the Herreshoff and a large R-boat, also being restored. A restored Beetle Cat hangs from the ceiling in the entryway; huge black and white photos line the walls near a lathe. Towers of stacked planks lean along an ancient wall, and always there are the sounds of hammers, saws, a sander and music blaring from various directions, mixing in the sawdust-laden air.

Oberg is crouched inside the Herreshoff, boring through the 735-pound lead ballast with a long drill. Fellow student Raphael Luciani, an affable Italian with pierced eyebrow, a handsome, shaggy look and a whale tattoo on a muscular forearm, stands by to help.

It is an oops moment. They misjudge the drill hole by an inch. They ponder, fill it with a dowel and epoxy and move on. There’s no panic; they don’t run to a teacher. They figure out what to do and do it. 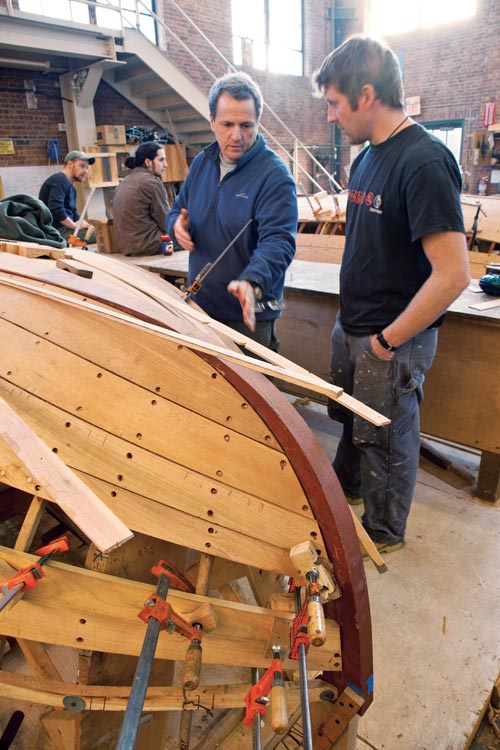 These early-spring months, students hustle to complete their work in advance of the much-anticipated launch day, June 4th, when their efforts will float in the nearby harbor. The hard part, Lynch says, is staying out of each other’s way as they scramble to complete various tasks. Now he’s the one inside the Herreshoff, sanding thin slats of wood that fit across the hull bottom.

It is precise work. Each slat must be level from side to side and strong enough to hold hundreds of pounds of people and gear when the boat is put to sea.

The scaffolding around the boat bears the tools of the trade: clamps, drills, hammers, a tub of dowel jigs, a glue gun, a vacuum, the occasional discarded water bottle. Nearby, the Beetle Cat benches carry common and individualized touches: tools abound along with nuts, bolts, discarded bits of wood and a handmade tool kit, a painted rose adorning one end. Another student has made a thick wooden mallet, upon which he has drawn an anchor and “Hope.”

They’re all working toward launch day, which Lynch calls “the most amazing feeling ever,” experiencing it last year when he and Oberg launched their Beetle Cats.

“There are two different feelings when you’re sailing a boat,” Lynch says. “One is just sailing a boat. The other is sailing a boat you built. You’re out on the water and it hits you: ‘Wow, we built this!’ ”

“I said it like forty times, couldn’t stop,” Oberg adds. “It’s not something you’re working on anymore. It’s done. You’re there.”

The second-year students, some as young as Oberg, some with white hair and worn faces and almost none of them with boat-building experience, will make their way into an uncertain world with the certainty of a centuries-old skill under their tool belts. What they’ll do is up to them. Kenyon says, “Some have a clear idea of what they’re after, some don’t.”

Lynch does. He wants to build boats, maybe at Rhode Island businesses like Hinckley or Mount Hope Boatworks. Wherever he winds up, he’ll feel the void when he leaves.

“I’m really going to miss coming to school every day,” Lynch says with a smile. “And I didn’t think I’d ever say that.”