Rhode Island’s culinary scene has many things going for it: Federal Hill dominates the Italian scene while South County is known for supplying some of the state’s best clam shacks. And yet, there are very few spots that provide a catch-all dining destination. Garden City Center in Cranston is one of those places. It may be best-known for its shopping, but with seventeen (yes, seventeen) eateries on the property, it’s also a foodie haven. Even better, the Center’s central location makes its noms accessible to discerning palettes all over the state. Here’s just a sampling of what on the menu.

Known for its modern Indian cuisine, Chaska is a fan favorite for lunch and dinner. Frequenters from the Garden City Center team say that the restaurant’s top must-try dishes include the Brussels sprouts thoran, the chili cauliflower and, of course, lots and lots of naan. Pair Chaska’s colorful yet cozy trimmings and/or autumn-primed patio with its creative cocktail menu and you also have all the makings for a romantic date night.

Just down the strip, Avvio is ideal for those who in need of a backdrop for their special occasion. Host your celebration inside the warm and welcoming dining room or out on the patio overlooking the Center’s picturesque gazebo. From eggplant panini sandwiches and black figs pizza to rigatoni Bolognese and chicken piccata, the Italian-forward menu can satisfy all appetites.

Meanwhile, the veteran owned Bistro22 is a charming alternative known for its rustic ambiance and fresh seasonal ingredients. In addition to a superb wine selection, the menu features both old family recipes and contemporary dishes — but when the chilly weather starts to set in, nothing beats the bistro’s tasty tomato bisque and grilled cheese combo.

Legal Sea Foods brings its award-winning varieties of fresh fish to the Garden City table all year around. Whether you’re craving a packed (and we do mean packed) lobster roll or a season catch on the grill, this upscale eatery is every seafoodie’s dream.

Tavern in the Square is often synonymous with a good time and the Cranston iteration is no different. It’s a great pick for a friends’ night (or morning — they serve brunch, too!) out with yummy bar bites, tons of boozy options and an American-style menu that can easily accommodate most dietary restrictions.

Introduce the kids to the finer side of pizzabilities with Anthony’s Coal Fired Pizza. Anthony’s pies use only highest quality ingredients, including hand-picked Italian tomatoes for the sauce and vine-ripened plum tomatoes for salads, Pecorino Romano cheese grated in house, fresh vegetables and herbs and homemade dough. They are then cooked at 900 degrees in a coal fired oven for a distinct, delicious taste and served piping hot.

Newport Creamery is and will always be a Rhode Island classic thanks to its comfy, diner-like atmosphere and tasty traditions. After a day of back-to-school shopping at the Center, treat the fam to a Big Beef Burger and an Awful Awful — you’re guaranteed to also gain some wonderful memories to look back on by the end of your visit.

But if you’re looking for more of a quick hit for your sweet tooth, Pinkberry frozen yogurt is also on standby!

Garden City Center also has a few more exciting eateries on the way. The first is Sweetgreen, a tremendously popular chain that serves delectable and customizable salads.

“This has been a top request from our customers for a long time, and we’re thrilled to be able to bring a fast casual and healthy eating experience to GCC!” says Faith Lockhart, Garden City’s Marketing Manager. 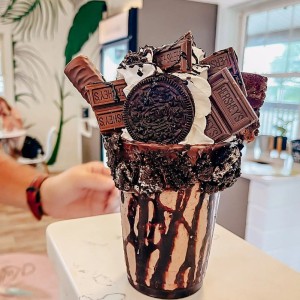 The other is Kaffeology, a local coffee-meets-mixology (hence the name) franchise in Newport County known for its over-the-top milkshakes, trendy aesthetic and support of women-owned businesses. The original concept came to owner Andreea Marin — who was born in Romania but grew up in Rhode Island — during a, well, stormy time in her life.

“I had moved to Orlando, Florida, for a while and had plans to open a coffee shop there, but then hurricane Irma hit and I was evacuated back home,” she says. “While I was here, I ended up finding the spot for my first store [in Newport] — it was a Subway originally. I printed out my business plan at a Staples, sat down with the landlord and he said, ‘Whenever you’re ready. I think this would be great.’”

She returned to Florida to collect her things and was back in the Ocean State just two months later, ready to get started. The first Kaffeology made its debut to much applause from locals in 2018, and by 2020, a second opened location had opened its doors in Portsmouth. The new Garden City Center location, which is aiming for an early 2023 launch, is just the latest in a series of plans to expand Kaffeology’s reach.

The new Kaffeology will also introduce a fresh concept for the franchise, acting as a café by day before converting into a tapas bar at night. 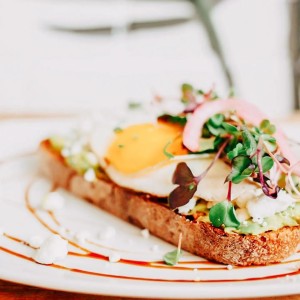 “Everything is also made from scratch. We’ll have fresh baked pastries, breakfast sandwiches using fresh cracked eggs… even our coffee syrups are made in house. We’ll also have colored souffle pancakes, which will be very cute,” Marin says. “And the menu will be seasonal, so we’ll have some staples, but a lot of it will be rotating. But, of course, we’ll always have our over-the-top milkshakes.

For the nighttime menu, Marin previews mini bites like pizzettas and charcuterie boards as well as creative cocktails and local beer and wine offerings.

Like the other locations, however, the new location will also sell products from women-owned businesses, both local and national.

“So, whether you come to our store to buy a sandwich, coffee or just water, or you’re picking up one of these beautiful retail items, your money is going towards helping a woman’s dream come true. Our whole goal and mission to support women all over the world,” she says. 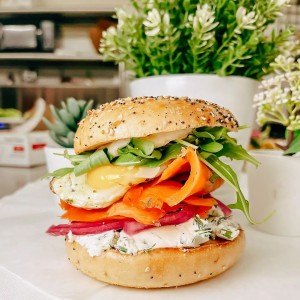 If you’re looking forward to supporting this woman-owned business and enjoying the fruits of its labor, the Garden City Center grand opening is set for the spring of next year and will feature live music, giveaways, samples and more. Keep up with them on Instagram for sneak peeks.

In the meantime, Garden City Center clearly still has plenty of spots to whet your appetite! Visit the Center’s Food and Drink Directory for the full list and follow along for more exciting announcements coming soon on Garden City Center’s Instagram.