Ice cream is a welcome taste of summer as March begrudgingly drags its legs into the soggy season of April. And next Tuesday, from 2 to 9 p.m. (or when the ice cream runs out) you can get some for free. 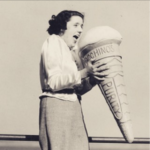 This is gonna be big

And it’s not just any ice cream, but the creamy vegan goodness being served at Like No Udder in Providence.

So why are they giving out 700 free ice creams?

Co-owner Karen Krinsky is doing it both as a thank you to donors who contributed to their Go Fund Me effort to host such an event as well as an “opportunity for delicious activism.”

“It’s an opportunity to serve our community on several levels. Food activism (convincing people with delicious eats) is a great way to change people’s old stereotypes about veganism,” Krinsky says. “It’s also an opportunity to get people to try vegan ice cream who may otherwise be unlikely to stop in. Everything we serve is vegan, including the cones.”

There’s plenty of choices for every palate, whether your a peanut butter gal or maple grapenut dude, and if you want tons of maraschino cherries on top, no one’s gonna judge.

If you’re still skeptical at the thought of ice cream minus the ‘cream,’ Krinsky says, “It’s a win for our taste buds and animals. There’s nothing to be scared of,  just try it and you’ll see. We get at least one or two people a day coming in who ask what dairy free options we have, not knowing they are walking into a completely dairy free shop.  The expression on their faces when we tell them everything is dairy free is priceless every time.”

All flavors included. Folks can choose between scooped ice cream and soft serve, which comes in vanilla, chocolate or twist.