When David Gaskill graduated from high school in 1979, he wanted to be an artist. But he also had an aptitude for engineering, “and my dad basically said he would help me pay for one or the other, art school or engineering, but he said he had never heard of a starving engineer.”

Thirty-five years later, Gaskill is a vice president and manager of a group of engineering and software developers for FM Global. But art remained a hobby for him. And he never forgot the pinball machines he and his brothers played in arcades while growing up in western Pennsylvania.

Now Gaskill is combining his skills for mechanical and electrical design with the artistic talent to reinvent vintage pinball machines, which he’s hoping to turn into a hobby business once he retires.

Gaskill restored his first machine three years ago, after he finished the basement of his of his family’s North Kingstown home. Then he began scouring Craigslist and shows where vintage pinball machines and parts were sold.

“The worse shape they are in, the better, because then I don’t feel bad about stripping them, rather than restoring them,” Gaskill says. 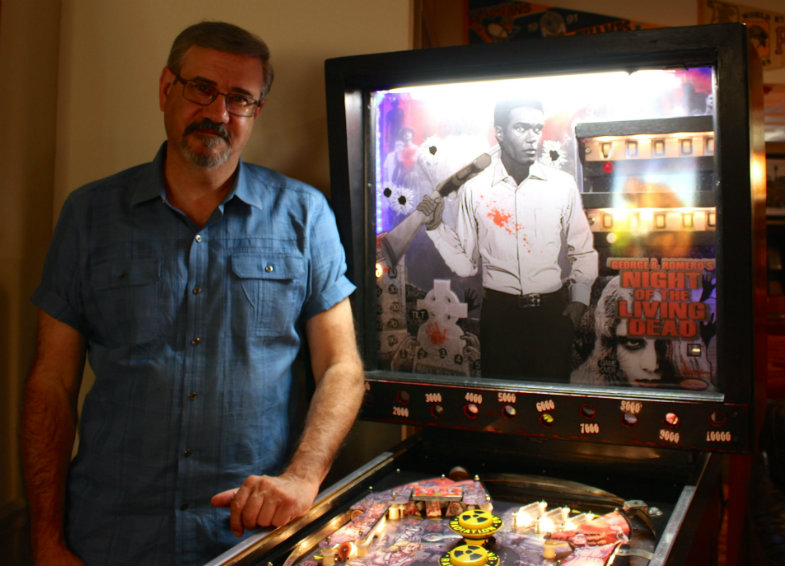 Pinball technology has changed over the years, from machines that were like old computers to more sophisticated electronic devices. Gaskill says it’s analogous to his own evolution and that designing the machines has become his art form.

“They start as weathered relics from the '60s and '70s — using traditional electromechanical components. Many were abandoned in favor of newer, faster, flashier units with computerized bells and whistles. But these relics can be rewired and they can be cosmetically reinvented.”

He created his first custom designed machine in 2012. Working with an old Williams Satin Doll machine from 1975, Gaskill based the new design on Kennywood, an amusement park in Pennsylvania near where he grew up. It features a roller coaster called the Racer and includes many iconic images from the park such as a ”Do Not Stand Up” warning sign. And he used his engineering skills to hook up the sound of a rolling coaster going up a hill each time a new ball is played.

Gaskill’s second machine is based on the Bruce Springsteen song, “Tenth Avenue Freeze Out,” which chronicles the formation of the E Street Band. He stripped down a Williams Suspense machine from 1969 that was in bad shape. In addition to his artwork, he added a jukebox function that shuffles through Springsteen songs and added a simulated turntable for 45s. He displayed it at last year’s Mini Maker Faire in Providence.

“The biggest compliment I got was people saying I don’t remember a Bruce Springsteen machine from the 1970s and I said that’s because I totally designed this and redid a machine from scratch,” he says.

Now, Gaskill’s working on his third machine, which is based on the original zombie movie, Night of the Living Dead. It was filmed in western Pennsylvania, near his hometown, and was groundbreaking for the time; Gaskill describes it as “social commentary disguised as a slasher film.”

He enlisted the help of a friend who is a comic book artist for the playing field and created a fog function, which uses the same atomizer technology in e-cigarettes. He’s hoping the design will be accepted at the Maker Faire in New York City.

“From the beginning, I wanted to build three machines to show: this is what I can do, and then work with people that have their own ideas and customize them.”

For more information, go to pinventions.com