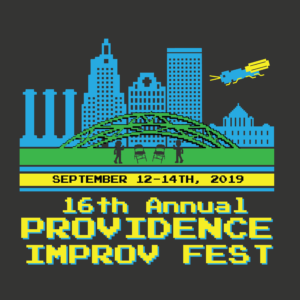 From September 12 through the 14, North America’s top improv comedians will descend upon downtown Providence’s AS220 for three nights of unforgettable laughs and powerhouse performances made up completely on the spot for the 16th Annual Providence Improv Fest (PIF). Shows will run simultaneously on AS220’s Main Stage and the AS220 Black Box Theater. Individual tickets for each show are $10 or, audiences can see an unlimited number of shows with a festival pass for only $35.

“We continue to strive for diversity in every aspect of the fest, and this year, we’re very happy to have incredibly talented, strong representation across multiple communities,” says Tim Thibodeau, PIF’s longtime Artistic Director. “If you’ve been before, you’ll see lots of returning acts, but we also love fresh faces, so there’s plenty new to see as well.”

Featured groups include: Nnamdel (Los Angeles, CA) comprising two veteran improvisers out of the famed Second City theater; The Code Switch (NYC), a group of seasoned POC and queer improvisers that create a show based solely on audience-sourced stories; Les Productions de L’Instable (Montreal), a thrilling, bi-lingual, music-based improv show, and Rameaka and Waltien (NYC), a duo of accomplished improvisers and actors who have been seen on stage in screen in The Wolf of Wall Street, Broad City, and At Home with Amy Sedaris.

“The Providence Improv Festival was one of the first festivals I performed in,” says Rachel Rosenthal of Raerost, a comedic, soon-to-be-married improv duo based in New York City. “I still remember the positive vibes of that first weekend—both on and off-stage. Those vibes and feeling of community are a lot of what keeps me coming back year after year.”

Local groups get a big spotlight too—PIF is produced in partnership with Wage House Theater (Pawtucket) and the Providence Improv Guild, who will feature ensembles such as Sow What, an all-female, all-hilarious troupe, and Kate and Casey, a long-standing duo out of Pawtucket. Groups from Wakefield’s Contemporary Theater Company, and local teen group Trinity Zoo will also make appearances. Improv Jones (Providence), will be making their 16th appearance at the fest, a mainstay in the community they have been performing for over 25 years. In addition, the FEST will feature a family-friendly pay-what-you-can show, all proceeds will go directly to support The Manton Avenue Project, on Saturday at 5PM featuring Warwick’s Bring Your Own Improv.

“PIF does an amazing job of highlighting the local talent from around RI and bringing in exciting acts from around the world, says Casey Calderiso, owner of Wage House, a theater and title sponsor of PIF. “Attendees are always so supportive and the energy surrounding the fest is magnetic.”

As for stylistic flourishes, PIF has plenty. Over the three nights, audiences will see musical improv from groups like Vox Magna (Pawtucket), First Four Names (Florida), and T.J. Mannix in Limboland (NYC), fast-paced, short-form game-style improv from State Champs (Pawtucket), Improv Boston, and the Bit Players (Newport), and classic long-form improvisation from groups like Women and Men (Upright Citizen’s Brigade theater), The Unmentionables (Vermont), and Raerost (NYC). And, this year, for the first time, PIF will be hosting a sketch comedy showcase on Saturday night at 8pm, featuring Hogwash (Providence), Live Nude Girls (Chicago), and the Boston Sketch Company.

“PIF is fun, familial and fantastic,” says Ben Rameaka of Rameaka and Waltien, “It’s always energetic, welcoming and excellent. I look forward to it, and seeing the people who participate in it every year.”

But PIF isn’t just about performing improv—it’s about learning the craft of improv, too. Throughout the weekend, the FEST offers open-to-the-public improv workshops for all experience levels. Workshops will focus on a single skill and will be taught by Frederic Barbusci (Montreal), Rachel Rosenthal and Sam De Roest (NYC), TJ Mannix (NYC), Andel Sudik (LA), and Nnamdi Ngwe (LA). All FEST instructors are experienced teachers and performers, and will bring their own, unique perspective on creating comedy out of thin air.

“I like teaching at PIF because of a lot of the workshop participants are at that educational sweet spot in their improv growth,” says Rosenthal. “They have the fundamentals down and are now looking for that jumping off point that gets them from ‘good’ to ‘a-ha!’”

At sixteen years, PIF is one of the oldest, longest-running improvisational comedy festivals in the country and shows no signs of stopping.

“We really want this to be a celebration of improv and finding the love in what we do,” says Thibodeau. “After a decade and a half of wonderful performances, we’ve managed to create a great community and an audience that keeps coming back.”

Tickets and Festival passes can be purchased at Providenceimprovfest.com, where more information can be found on showtimes, featured acts, and workshops.

Raerost: PIF veteran Rachel Rosenthal has been coming to the fest for nearly 12 years now with groups like North Coast and Big Bang. This year, she’s bringing her comedy partner and fiancé, Sam De Roest to town to perform their signature long-form comedy set. According to the pair they “have that kind of on-stage mind-reading chemistry that could be used for evil. But thankfully, they are using it for good.”

Women and Men: Formed in 2014 at the Upright Citizen’s Brigade theater in Manhattan, Women and Men have climbed the ranks of New York City comedy, ascending to their current slot, a regular Saturday night headlining show. Their performers have been seen on Comedy Central, Late Night with Seth Meyers, and Funny or Die.

The Code Switch: This cast of hilarious and talented POC and queer improvisers will build a made-up show based on stories sourced from the crowd. The Code Switch’s format is based on the idea of Code Switching—changing the way one speaks or acts around certain people in order to “keep the peace.” It is an eye-opening show that explores identity, while piling on the laughs.

Waltien and Rameaka: Steve Waltien and Ben Rameaka are two high school friends who wound up performing comedy together in the same city, many years later. Both are veteran performers, having trained, performed, and taught classes at both the Upright Citizen’s Brigade theater and Chicago’s storied Improv Olympic (iO). You also may have seen them on television or in theaters—combined, the two have acted in such projects as The Wolf of Wall Street, Mike Birbiglia’s Don’t Think Twice, Broad City, and Comedy Central’s Klepper.

TJ Mannix in Limboland: TJ Mannix is a twenty-one-year veteran of the New York City improv scene and has taught at the city’s top improv theaters and is currently a faculty member at the Professional Conservatory of Musical Theater at NYFA in Manhattan. At PIF, Mannix will perform a completely improvised solo show. It has been described thusly: “One man. Four chairs. Unlimited characters. LimboLand is a one-man tour-de-force.”

Dangerfield: The all-female troupe are no strangers to PIF. On the heels of a breakout performance at PIF 15, Dangerfield is back performing their signature form “The Spokane.” One of the longest-running groups in Boston, Dangerfield has performed at the Hartford Improv Festival, the District Improv Festival (D.C.), the Del Close Marathon (NYC), and the Edinburgh Improv Festival.

Big Bang: With improvisers from Boston, NYC, and Florida, Big Bang brings together an eclectic mix of performers and styles. Fast-paced and completely free-form, Big Bang follows a group play philosophy of “follow the funny,” which often translates to a rate of over a scene per minute. It’s a show that builds rapidly and culminates in a series of surprising and fun callbacks.

Nnamdel: Based out of LA and trained out of Chicago, Nnamdel features Andel Sudik and Nnamdi Ngwe, two of the most experienced performers and instructors in the country. Their scenework is focused, honest, and funny and they’ll create a night of improv you won’t soon forget.

Four First Names: Making their PIF debut, Orlando, Florida’s Four First Names brings an exciting long-form musical improv show called The Aftermath. For The Aftermath, Four First Names (made up of Richard Paul and Chris Barry) asks an audience member to describe a seminal moment in their lives. Using details from the story, the duo digs deep into the details and emotions of the story to string together an original musical right before your eyes.